A Day in the Life: Bulgaria

As I write this post I am sitting in the airport in Kuala Lumpur, Malaysia, on a layover on our way to Perth, Australia, having just spent four days in Phuket, Thailand, so as you can imagine I have a lot to share! But first I want to finish wrapping up Bulgaria with a day in the life post, then two more posts about all the food we ate while there. In order to talk about what a normal day looked like for us in Bulgaria, I have to split the post into two sections because we lived one way for the first three weeks, then flipped the switch and lived completely differently for the last two! 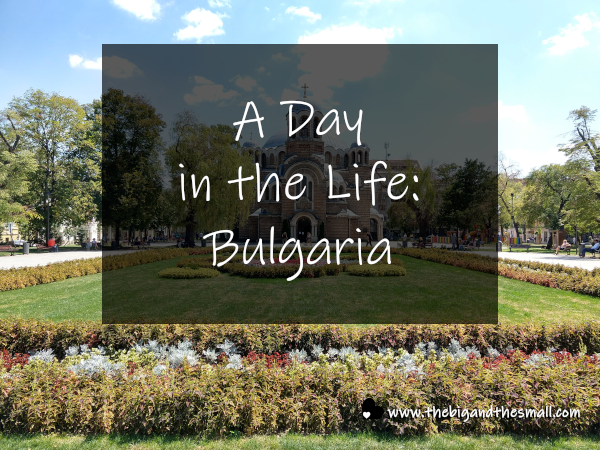 When we first arrived in Bulgaria I was exhausted, behind on the blog, and grateful for a place to crash land. We had just spent 2 very busy months in the States catching up with family and friends, then 10 days in London punctuated by 3 days worth of job interviews, then a whirlwind 5 days in Italy with a good friend. While all of that was amazing and I am grateful for all of it, I was ready to just sit on a couch and vegetate for a while! And vegetate we did.

For the first three weeks we mostly just hung out in the beautiful apartment, took care of Smokey, and enjoyed the super fast and reliable internet. We signed up for Hulu so we could binge-watch all four seasons of Veronica Mars (the original three and the newest one!), on Amazon Prime we watched two seasons of The Good Fight, three seasons of The Man in the High Castle, and on an app they had called Plex we watched countless movies. (Ok, I could probably count them, but I'm too lazy.)

Within our first week we discovered that the closest grocery store (a mere 7 minute walk away) had amazing prepared food at a great price so we started buying that for dinner most days (yay for not cooking!) When we learned that all of that food was discounted 50% off after 9PM we decided to switch our waking/sleeping/fasting hours so we could take advantage of that. Instead of operating on Bulgaria time we decided to try and operate on American time in Bulgaria (so about 8 hours behind for central time.) Our hosts had told us that is what they normally do so we knew Smokey would adjust to it and be fine not taking his walks till late in the afternoon if we slept in.

So for a while our schedule looked something like this:

12PM-2PM Wake Up, Walk the Dog, Yoga
We'd stay in bed to read, catch up on social media, play on our phones, etc. When Smokey decided he was ready to go outside, that was my cue to get up, get dressed and take him for a walk. I loved our little walks around the neighborhood as it gave me a chance to catch up on my podcasts and enjoy the view of downtown Sofia. When I got back I would do 15 minutes of yoga in the bedroom with the curtains open and the sun shining in. I found I really enjoyed starting my day that way!

2PM Break the fast!
Breakfast was our usual of scrambled eggs with vegetables (zucchini were crazy cheap!), fruit, and here we discovered some amazing super thin and crunchy bacon that we loved, so we had that most mornings as well. This is when we would start watching whatever show we were currently bingeing...

3PM....Most of the day let's be honest - TV Time
I am a little ashamed to admit just how much TV we watched during our first few weeks in Bulgaria. At first, my brain really needed the break, but then it just turned into a bad habit. I got caught up on the blog and kept most of my posts on time, but other than that I really did not accomplish much. I didn't even do any of the big grocery shopping as it was a long walk to the cheaper grocery store so Joel did that by himself.

6PM Publish Blog Post
Like I said, I mostly got this done on time... but often I had a nice little reminder text from my mom. (Thanks mom!)

8:45PM Walk the Dog, Go to the Grocery Store
At this time of night we decided to kill two birds with one stone and walk the dog/pick up dinner at the same time. It was the perfect walk for Smokey, and we always took his little backpack so we could take him into the grocery store with us. (He is so well behaved I think we could have just taken him in on his leash, but I always felt better having him in the backpack.) We would pick out dinner from whatever was left then head home to eat!

9:15 Dinner & A Movie
After watching TV most of the day we really switched things up at night and watched movies instead! (Yes, that is sarcasm.) We were done eating by 10 (making our fasting hours 10PM-2PM) and spent the rest of the night chilling. Ya know, because we had such a hard day. We usually tried to stay up until around 3AM so we could make sure to sleep in and be somewhat on American time (even though 3AM was only 7PM back home, so a pretty early bed time for that time zone.)

After about three weeks of this, I started to run out of blog content, plus I was feeling really guilty for being in a new city in a new country and not really taking advantage of the opportunity to explore. My hibernation roots had grown strong as it really took a TON of effort me to get myself out of the house but once I did we never stopped going out!

If I have one regret on our whole trip so far (like, since we left in July 2018) it is that we (I) took so long to work up the energy to explore Sofia. Looking back, we should have purchased month-long bus passes the first week we were there, and really taken our time to get to know the city. Instead, we crammed it all into the last 10 days or so. Whoops.

Once we started getting out of the house we switched our time table back to normal human hours in Bulgaria. We learned that getting food downtown was just as cheap and delicious as the grocery store so we could switch our eating hours easily, and neither of us had really gotten used to switching our sleeping hours. Smokey was a champ who just rolled with any changes we threw at him. So here's what part two of Sofia looked like:

8AM Wake Up, Walk the Dog, Yoga
We pretty much had the same morning routine, we just moved it up by about four hours. So when most of our friends and family back home were going to bed (midnight for them) we were just getting going for the day!

10AM Breakfast at Home
Our normal breakfast routine stayed the same - eggs, veggies, fruit, bacon + watch a show. But the key difference is we would only watch ONE episode of something! I know, what a concept, right?

11AM Leave the House
What a novel concept! Once we had the bus system figured out (which admittedly took a while) it was easy-peasy to get from our apartment to downtown. The bus stop was right outside our front door, and if we timed things right we could get downtown in about 40 minutes. (If we timed things wrong and had to wait for our first bus extra long it was closer to an hour.)

12PM-7PM Explore Sofia & Eat Dinner
The first day we left the house we went on the Free Sofia Tour (which a friend had recommended to us) and it's one of the best things we've done anywhere we've been! The tour oriented us to downtown, gave us a lot of history of the city, and grew our list of places we should visit before our time was up. After that, we went on a Jewish history tour, saw several churches, went to the movies, hiked a waterfall, and enjoyed everything about the city - both big and small. We also ate a ton of delicious and cheap food which deserves a whole post of its own.

7PM Ride the Bus Home, Greet the Dog
Some days we got home earlier than others, but we always tried to be home no later than 8PM so we didn't leave Smokey for too long. I think he struggled a bit in the sudden switch of one of us always being there and literally never leaving the house without him to us leaving him for long stretches at a time, but he did okay. And he was always sooooo excited when we got back it was my favorite thing - he never begged to be let outside or go for a walk, he would just jump as high as his little body could go until I would pick him up and snuggle him for a few minutes. It was the best.

8PM Walk the Dog
While we were there the days started getting shorter so our evening walk got earlier and earlier so we wouldn't be out after dark. I never felt unsafe anywhere in Sofia, but I still don't like walking in the dark even in a place I know well.

9PM Movie or Show Time
We cut down our TV time significantly in the latter half of our stay in Sofia, but we didn't quit cold turkey. Most evenings we would still watch a movie or a couple episodes of a show until going to bed at the much more reasonable time of midnight.

This is really the first time we have had such drastically different schedules in one place. Usually we tend to find a routine early on and stick to it the whole time we are at a housesit. We are so glad we had the chance to go to Bulgaria and explore the unique city of Sofia - if going to Europe is on your travel list I'm guessing Bulgaria is not on it, but I'm here to tell you it should be! The city is beautiful, easy to navigate even if you only speak English, and shockingly inexpensive! We loved it!