The same company that does the Free Sofia Tour also does a Free Sofia Jewish Tour which focuses on the history of the Jewish people who have called Bulgaria home. While the regular tour is offered 365 days a year, the Jewish tour is a relatively new offering (it started this past spring) and currently runs twice a week. We ventured downtown again on Sunday at 11:00 to catch this second tour through the heart of Sofia. 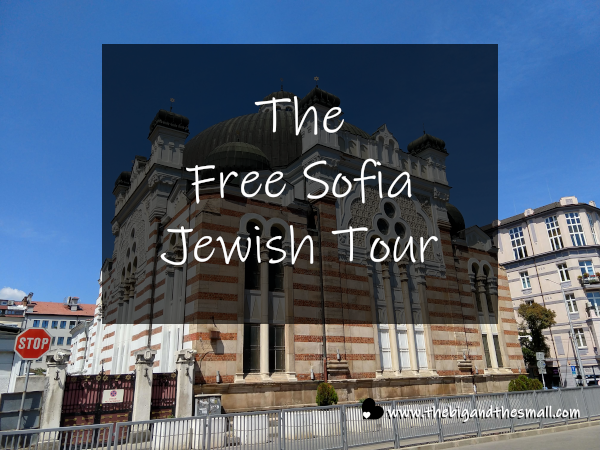 Our tour guide this time was a guy named Kris. He, like our first guide, Dessi, is also a native to Sofia. He was very knowledgeable about this topic but you could tell he wasn't quite as practiced at it as they are at the regular city one (which they've been giving since 2009.) Even so, it was enjoyable to follow him around the city and learn some history! 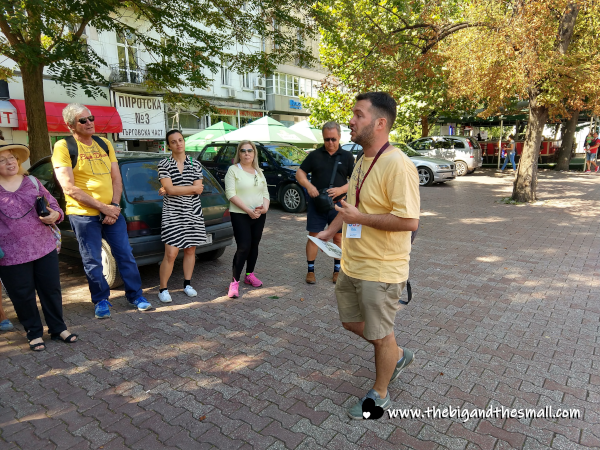 The first stop was another bit of Roman ruins that we hadn't encountered yet before (seriously, these are all over the city.) This particular spot has been found to contain some pieces of stone with Jewish names and symbols on them so it is believed it may have been a burial site at one time. At this spot Kris also shared about the time period when Bulgaria was first becoming a Christian country, and deciding between following the Roman Catholic Church or the Orthodox Church. The tsar at the time actually wrote letters to both Rome and Constantinople asking how, as new Christians, they should treat the Jewish people who lived among them. Luckily both responses were that the Jewish people should be treated with dignity and respect, just like anyone else. 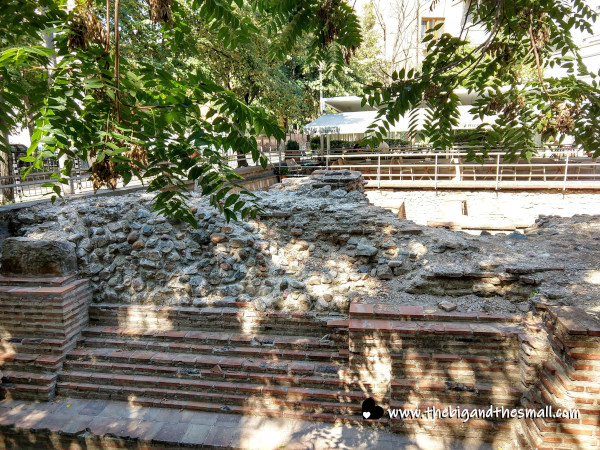 On the way to the next stop, we took a minute to admire a spot that isn't really on the Jewish tour but is pretty neat nonetheless. I mentioned in one of my previous posts that Dessi told us about an ancient colosseum that was still mostly buried - well, we got to see the bit that is exposed. The colosseum was discovered when the landowner went to build a hotel, and the ended up just building the hotel around the ruins! The hotel is called the "Arena di Serdica" (Serdica being the name of the Roman town that once stood here.) I had to take this picture through the window so there's a bit of glare - but how cool to have a hotel built around ancient Roman ruins?! 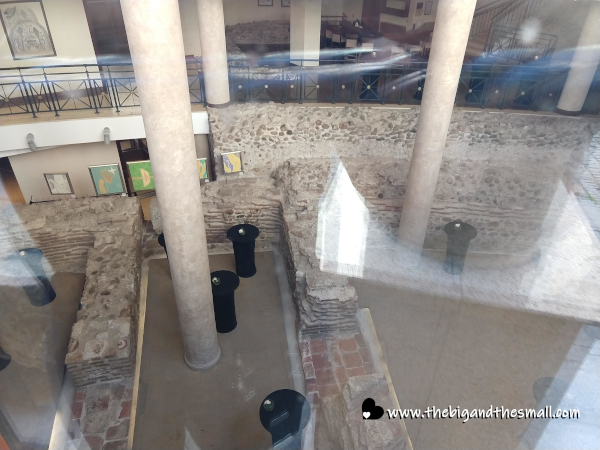 The way to our next location involved walking up what felt like a secret staircase. This was apparently a detour from the normal route the tour would take as the regular road is currently under construction. I'm glad we got to take this more unusual path! 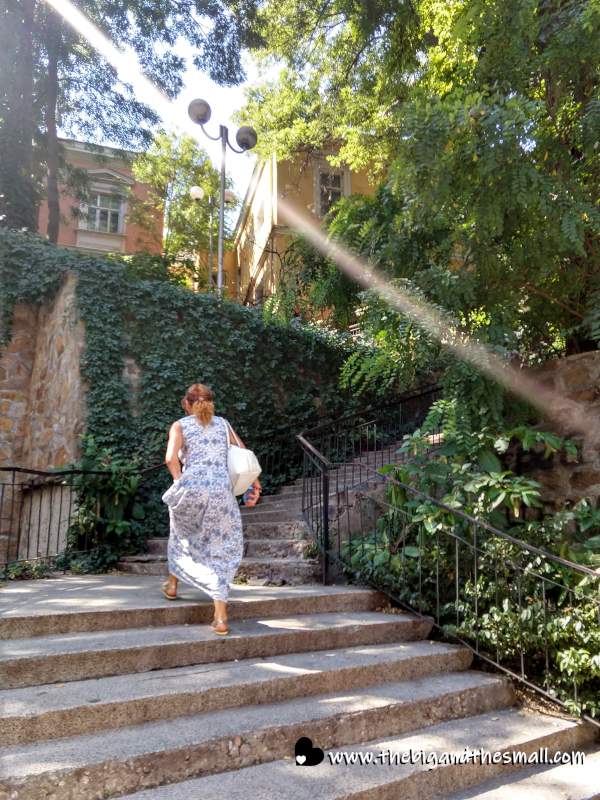 The stairs deposited us right next to the former palace that we had seen on our first tour. We stopped there for a while and Kris shared about the history of Jewish merchants in the city. Around this area there used to be a strong market place that was mostly dominated by Jewish vendors and was frequented by everyone in the city. Unfortunately, the market area was completely destroyed by bombing in World War II. This old photo shows what part of the area used to look like. 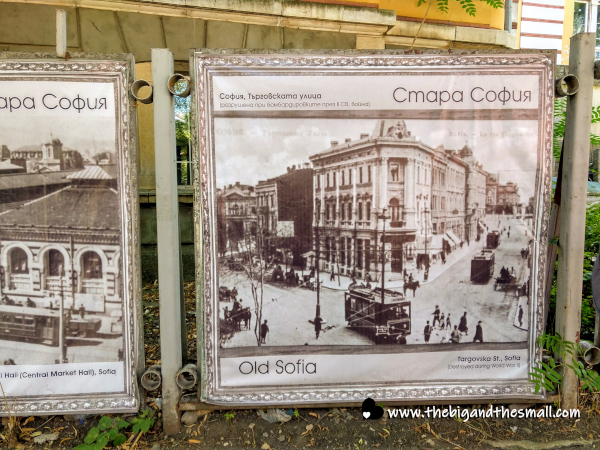 From there we returned to the St. Sophia Church we had been to already, but instead of looking at the front of the church we walked around to the side. Here stands a monument to what is the most incredible story of the Jewish and Bulgarian people - the story of what happened during World War II.

When World War II started, Bulgaria wanted to remain neutral, and they managed to do so for the first two years of the war. Eventually, however, the war was at their doorstep and both sides demanded that Bulgaria make a choice. They looked to the Allies and saw that Soviet Russia seemed to be consuming other eastern European and Baltic states, and they were worried they would not maintain independence. So Bulgaria chose to side with the Axis and Hitler. As such, they were immediately supposed to enact the racial rules that Hitler put in place everywhere he ruled. Jews were no longer able to own property, run businesses, or be paid for any work for that matter.

So, the Bulgarian government put the Jews to work building various things around the city and country. Hitler began to demand that the Jews be removed from the country and sent to death camps, and the leadership said they would do so just as soon as they were done using the free labor. They managed to put Hitler off this way for many months. Eventually, Hitler became more demanding, and all of the Jews were rounded up and prepared to be shipped off. The Deputy Speaker of Parliament, Dimitar Pesheve, let slip what was happening to the people of Sofia (it was supposed to be kept quiet) and the day before the train was to leave, a portion of the tracks was destroyed. The Tsar had to call Hitler and say that the shipment would be delayed because of the damage.

A few months later a train was again filled and ready to leave the country with the Jewish people, headed to a death camp. This time, the Orthodox Christian leaders in Bulgaria took the lead of protest. A Bishop of the church, named Kiril, actually laid down on the train tracks and said that the train would leave Bulgaria only over his dead body. Because the church was incredibly influential in Bulgaria, and this man the prominent leader, no one dared to challenge him on this. The train was again delayed, and the Jewish people saved.

This time the Tsar had to go to Germany and explain to Hitler in person whey the deportation had yet to happen, and he died shortly after this visit under mysterious circumstances. According to Kris, some people theorize that Hitler had the Tsar killed for failing to follow orders regarding the Jews. Others believe that the Allies killed the Tsar in order to destabilize the region which did occur. In the war Bulgarian troops never were active in fighting on the front, they mostly worked to maintain order in countries that were occupied by Germany. Towards the end of the war, as Germany and the Axis weakened, Bulgaria actually changed sides and aligned with the Allies. Kris said this makes Bulgaria the only country in World War II to be on three sides - neutral, then Axis, then Ally.

In the end, Bulgaria managed to save all 49,000 Jews that lived within the country. At the end of the war, when Israel was established as a country, most of the Bulgarian Jewish people chose to emigrate to Israel and were very influential in the establishment of the country. These three stone monuments were erected by Israeli Jews as a way to honor what Bulgaria accomplished during World War II. What an incredible story!

After this dramatic and incredible true story we headed on our way to the Jewish synagogue in the city. In order to get there we passed through the Central Market Hall which is housed in a beautiful building. 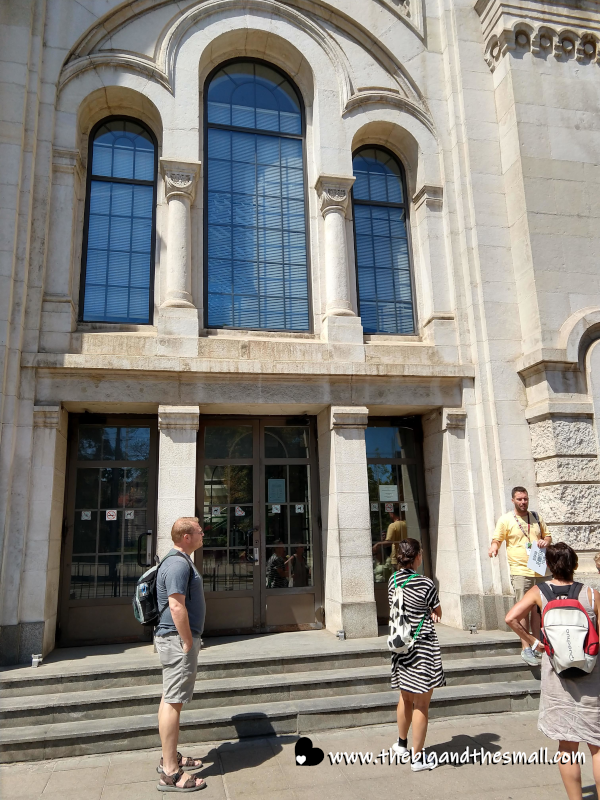 The Central Market Hall houses many vendors, restaurants, and shops all within an enclosed, air-conditioned (thank goodness!) space. In the center of the market is a fountain in the shape of a star of David. 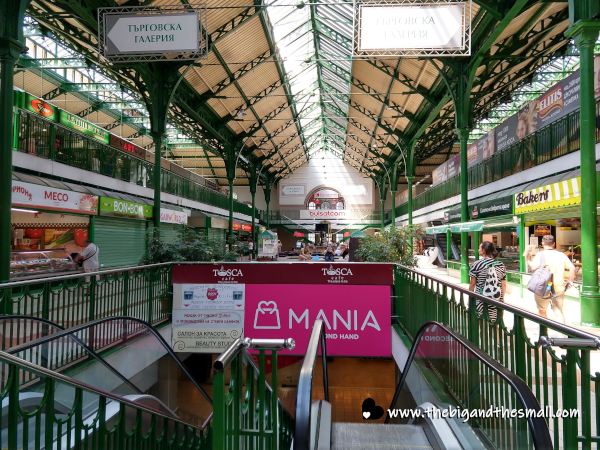 When you come out the other side of the market you are standing at the Jewish Synagogue in Sofia! The synagogue was built in 1908 to be the largest in Europe, though it has since been surpassed and stands as only the fourth largest. It is still active as there are about 1,000 Jewish people still living in Sofia. However, in a city of 2 million people that is a very small overall amount. Again, most of the Bulgarian Jews chose to move to Israel once that country was established. 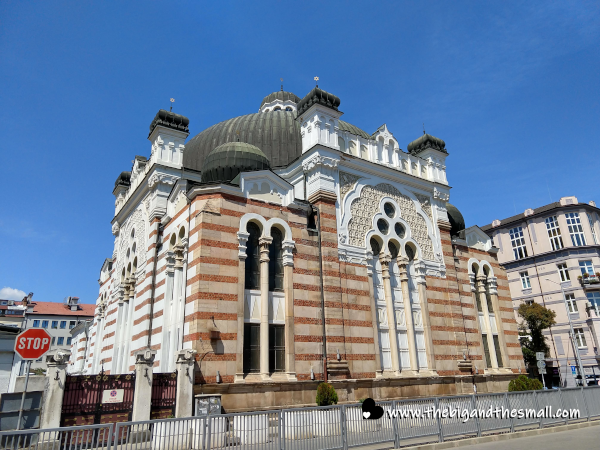 I loved learning about this particular history of the city and was particularly fascinated by the story of saving the Jewish people during World War II. If only Christian leaders throughout Europe had shown as much courage and fortitude as the Orthodox leaders in Sofia, what a different time it could have been. It certainly makes me think about what Christian leaders should be standing for today!