Last but certainly not least, we have part 3 of our Free Sofia Tour! If you need to catch up you can find part 1 here and part 2 here. When last we left off we were at the oldest building in the city. From there we headed to the City Garden! 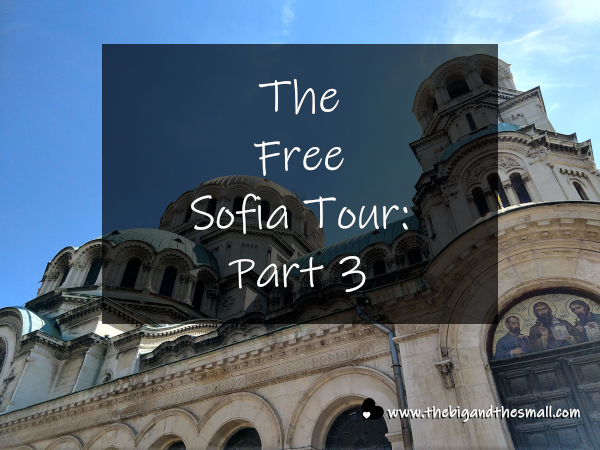 We've done a lot of walking through the city since this tour and there are a lot of random gardens scattered throughout Sofia. But none of them hold a candle to the beautiful City Garden. Dessi told us that at this time of year the garden is less crowded than usual, as many people leave the city in the month of August for holiday (vacation.) There is a gorgeous fountain at the center with a dancing statue and benches all around so you can just sit and enjoy the view. It's a fabulous oasis in the middle of the city! 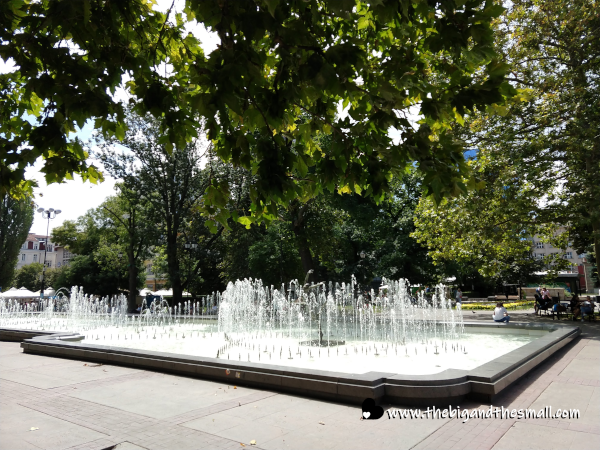 Off to one side of the garden is the National Theater which Dessi said is known as the best theater in the country. It is closed for the whole month of August for the same reason Dessi shared above. Supposedly the city as a whole gets really quiet in August but it sure seems busy to us! Another cool thing Dessi shared with us - on Sunday evenings at 5pm many locals gather in front of this theater to share in traditional Bulgarian dancing. They play traditional music, wear traditional clothing, and anyone can join in! We are planning to go down to see it this weekend and I cannot wait! 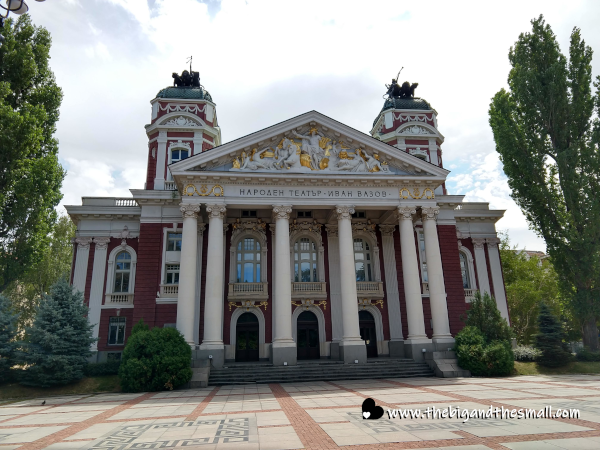 Just to the right of the National Theather is a seven story yellow building that would seem very ordinary if it weren't for the fun fact Dessi told us. Before the communist regime this building was known in Sofia as the "skyscraper" because it was the tallest building in the city. At the time it was actually only six stories, not the seven you see now, as that last one was added later. Thus when the communist square was built those buildings became known as the "largo" because they were huge in comparison to this! These days none of them really qualify as impressively large buildings as Sofia has more traditional skyscrapers like most big cities. 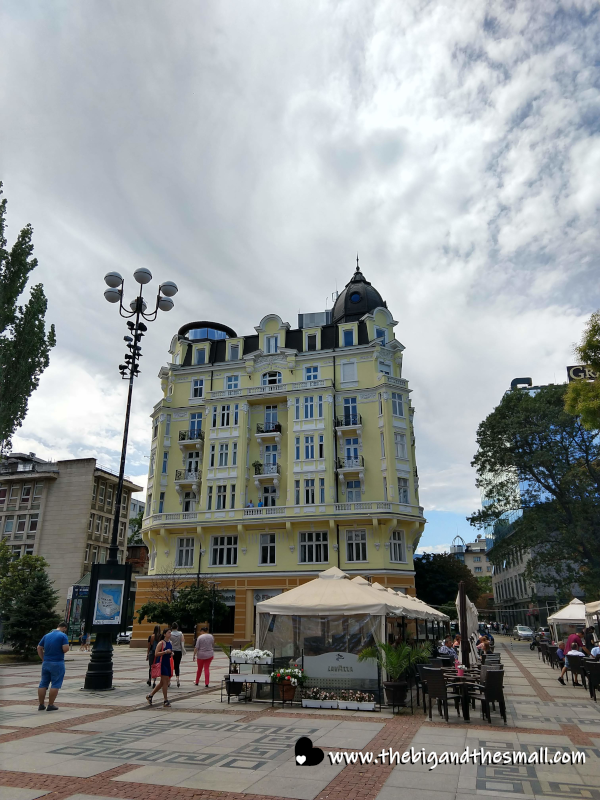 The next block over from the city garden is the current national art gallery. Dessi recommends skipping this one and going to the Sofia Art Gallery, which has free admission on Thursdays so we are planning to check it out. Before it housed art, this building was several other things. During the Bulgarian monarchy it was actually the palace for the Tsar! It's not really very impressive as palaces go...but that is because before that it was a police building during the reign of the Ottoman Empire! When it was the palace the city garden would have been a part of the grounds of the palace and it all would have been patrolled by soldiers, making it somewhat more impressive. 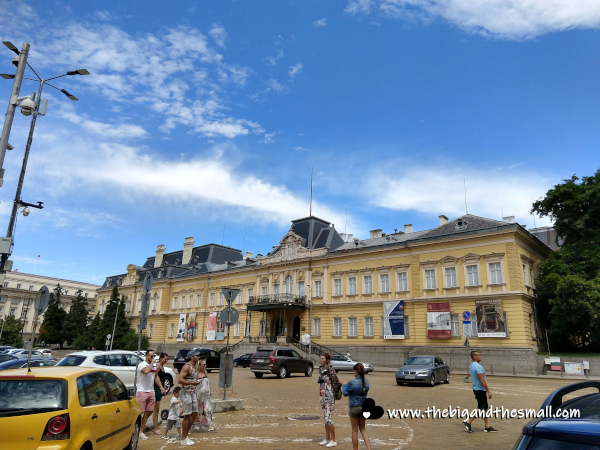 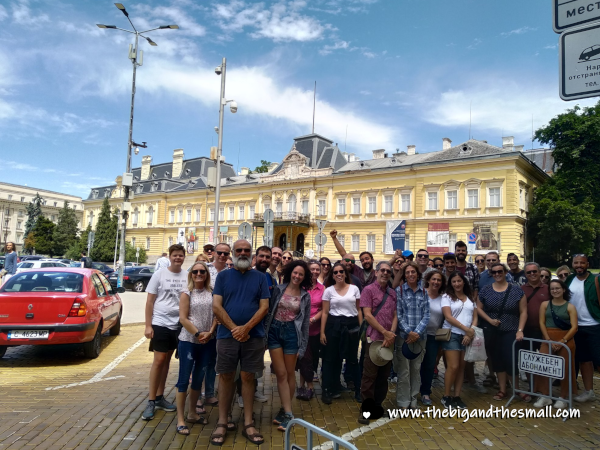 After the group picture, we had just a short walk to the final destination of our tour. We stood in the vicinity of two important churches to Sofia. The first was the St. Sophia Basilica. Do you remember in the first post when I said the city was not named for St. Sofia even though a statue of her now stands prominently in the city center? Well, that's because the city is actually named after this church! This is the second oldest church in the city, and though it was hard to tell on our walk here, it stands on a hill. The church was a well-known landmark in the area, so people would say they were going to the city of Sofia - meaning the city where the St. Sophia church was located. Eventually, Sofia just became the name of the town. Sophia as used as the name of the church actually means "the wisdom of God" and you can find thousands of churches around the world named Sophia. 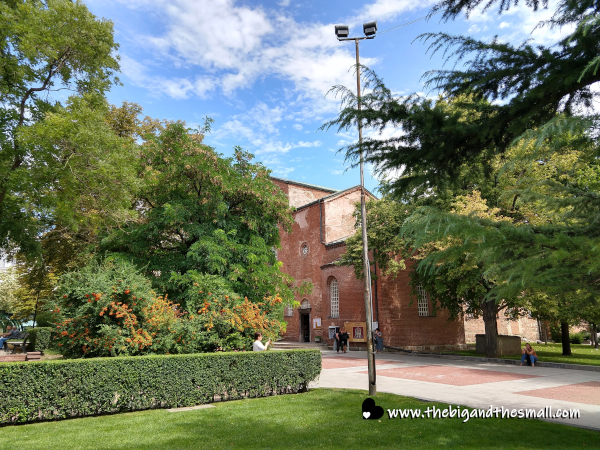 The second church we could see from this vantage point is one that Sofia is very famous for - the Alexander Nevski Cathedral. This Bulgarian Orthodox Church is stunning, featuring gold domes and Neo-Byzantine architecture. Though it is famous in the city and all around Bulgaria, Dessi said that if you asked a random citizen on the street almost no one could tell you who Alexander Nevski is. Turns out this is because Alexander Nevski is a Russian saint from the Russain Orthodox Church, and this building was named after him because it was built at a time when Bulgaria was very friendly with Russia. During World War 1 the church was briefly renamed while Bulgaria was at war with Russia, then the name went back at the end of the war. 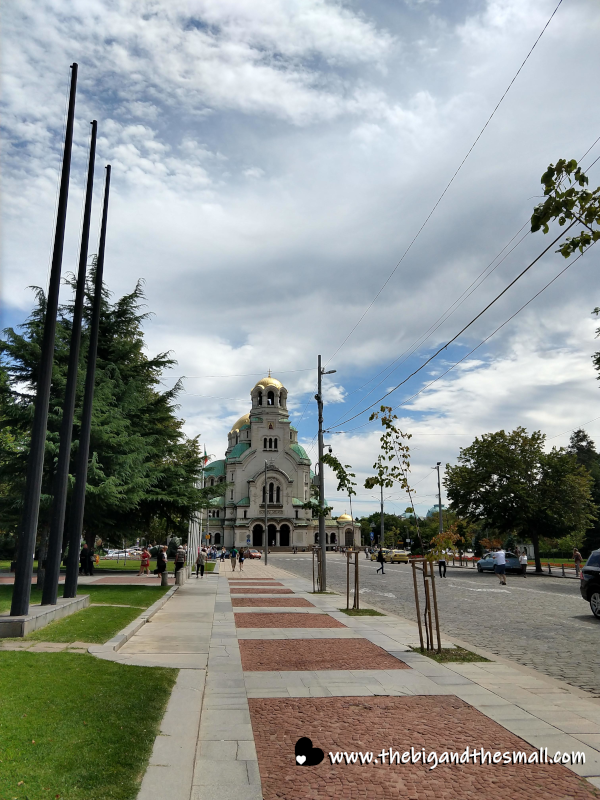 When the name was changed it was the St. Cyril and Methodius Cathedral. Cyril and Methodius are known as the inventors of the Cyrllic alphabet (also commonly known as the Russian alphabet.) Dessi said that people will often ask her why Bulgaria uses the Russian alphabet - she said that actually, Russia (and about 12 other countries) use an alphabet that was invented in Bulgaria! This was a very important fact that she wanted us to remember.

With that fun fact, our tour ended. We have since gone back to check out those last two churches more in-depth and I will share about that soon! After the tour we sat in the nearby courtyard of the St. Sophia church, ate some snacks, and filled our water bottles with the natural cold spring water flowing in a fountain in the center. Then we walked through a nearby market and got suckered into buying a souvenir (we normally wouldn't but the sweet old lady was very good at her job!) 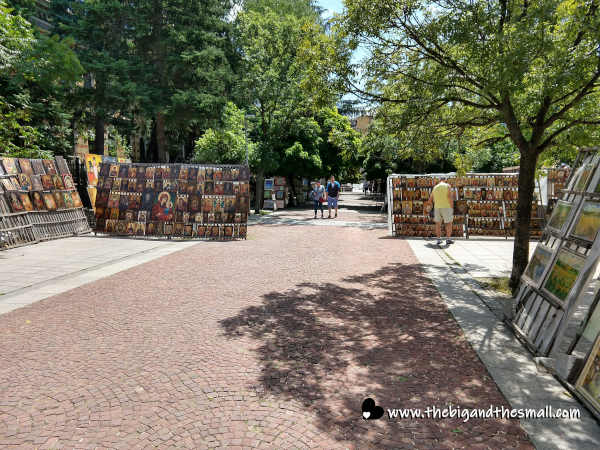 Then we took far too long wandering back through the city trying to find the right bus to get us home, took a few detours to check out a mall with a movie theater, buy me some new sunglasses (my £1 pair from England broke :( ) and get a burger at the same place we grabbed breakfast before the start of our tour (more on food coming later!) It was a looong day but so worth it!

If you ever get the chance to go to Sofia (and really, you should add it to your list of places to go!) the first thing you want to do is go on the Free Sofia Tour. My only regret is that I wish we had done it sooner!

Seems like one of the best tours for getting to know a city! Wow!

It was really amazing! I can't believe it was free! They do take donations and we made a note to send them a good one when we have more disposable income again :)