Let's jump back into our FREE tour of the city of Sofia - the capital of Bulgaria. If you missed the first part of our tour, you can find that post here. You'll definitely want to read the whole thing and catch up! 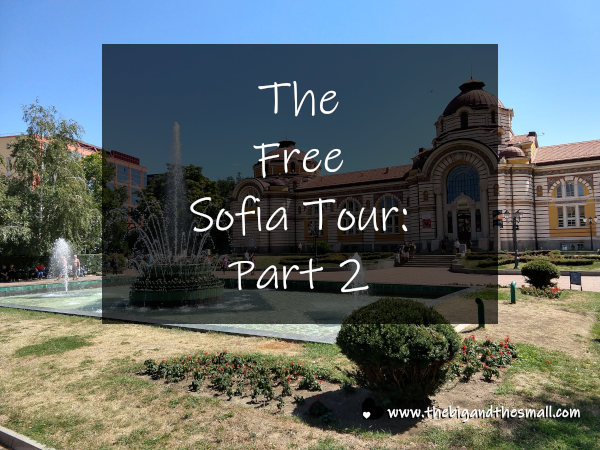 Our next stop on the tour was this beautiful old building which used to be a public bathhouse. Way back in the day before indoor plumbing allowed everyone to bathe in their own home, public bathhouses were not just a luxury for the rich, they were a necessity for everyone. Inside this building runs natural spring water that is actually available all over Sofia. In this building it was harnessed into pools where people could come to bathe, usually about once a week. When public bathhouses became unnecessary in society, the building fell into disrepair. Recently, the city has refurbished half of the building and turned it into a museum on the history of Sofia. The other half awaits use, and Dessi expressed her hope that it would be turned into a spa that would make use of mineral spring water that still runs throughout! 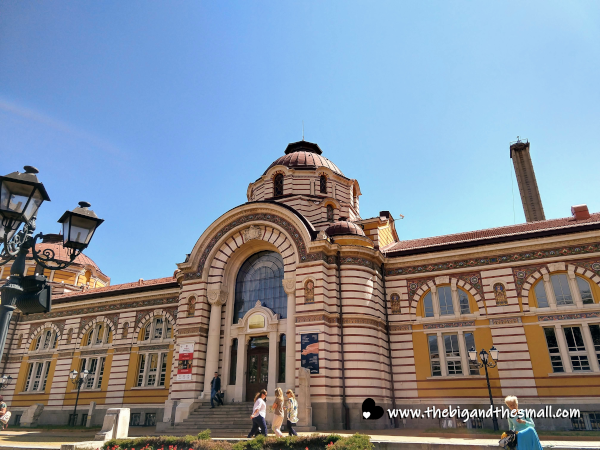 Speaking of that mineral spring water... some of it runs through fountains outside of the building, easily accessible by the public. Dessi warned us that the water would not smell very good - it smells of sulfur - but it is perfectly safe to drink. She demonstrated by taking a drink of it herself, first. Also - the water is very warm! It runs at about 35 degrees celsius, which is about 95 degrees Fahrenheit. To me that's the perfect temperature for taking a bath, but not so much for drinking. Joel gave it a try though! We also filled up one of our water bottles and after I cooled it down in the fridge at home, it was wonderful to drink. 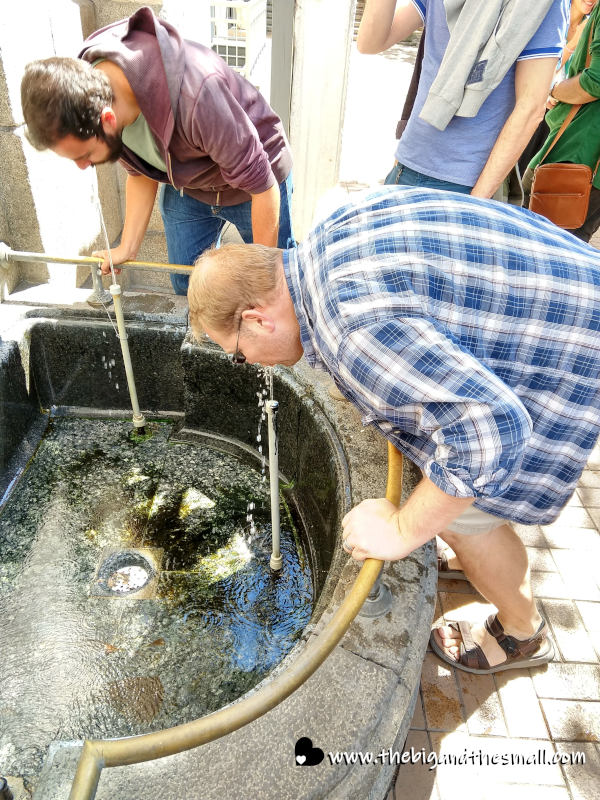 After refreshing ourselves with the warm spring water we moved on to a square which contains the former communist party headquarters. After World War II Bulgaria was under communist rule until the mid-'80s. These buildings were completed in 1955 and as the biggest in the city were meant to be massive and impressive to show the might and strength of the communist party. This despite the fact that the country couldn't really afford to build these buildings at the time. These days the buildings house the administration aspects of Sofia's democratic government. (The clear domes you see in front of the building protect the exposed Roman ruins below!) 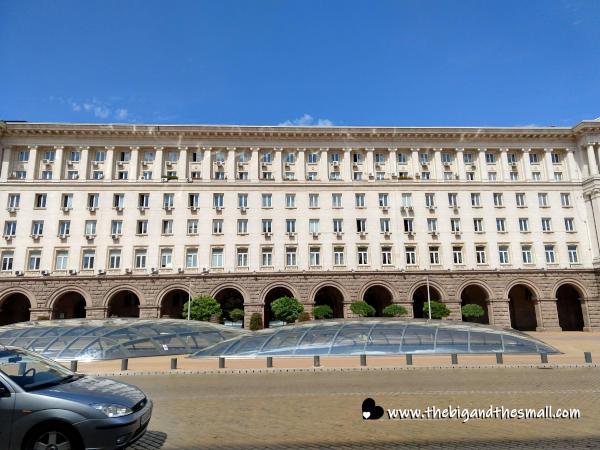 This square contains two identitical buildings like the one above, that sit across from each other. At one end of the square is a grand building that is still being restored/refurbished. When complete this will house the Bulgarian National Assembly. 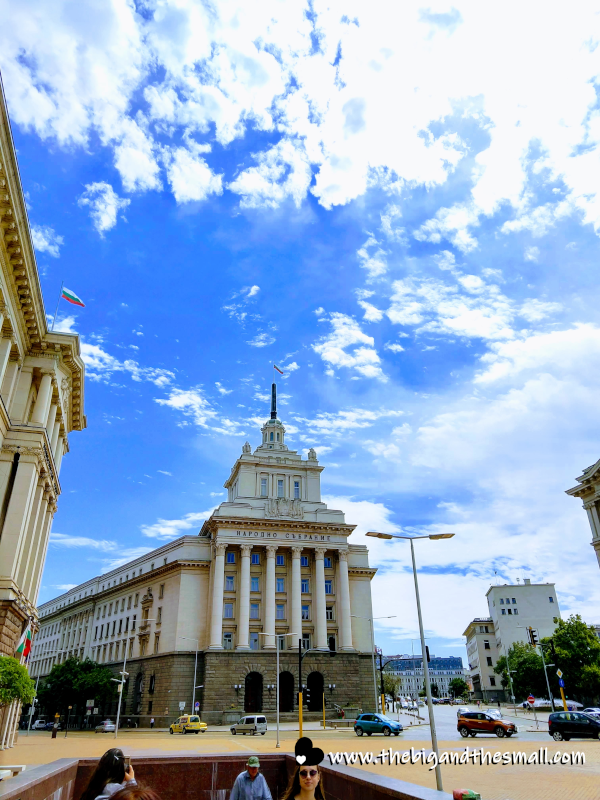 At the other end of the square is the statue of St. Sofia which I mentioned in the first part of the tour. When the country was under communist rule, this was a statue of Lenin that overlooked everything. 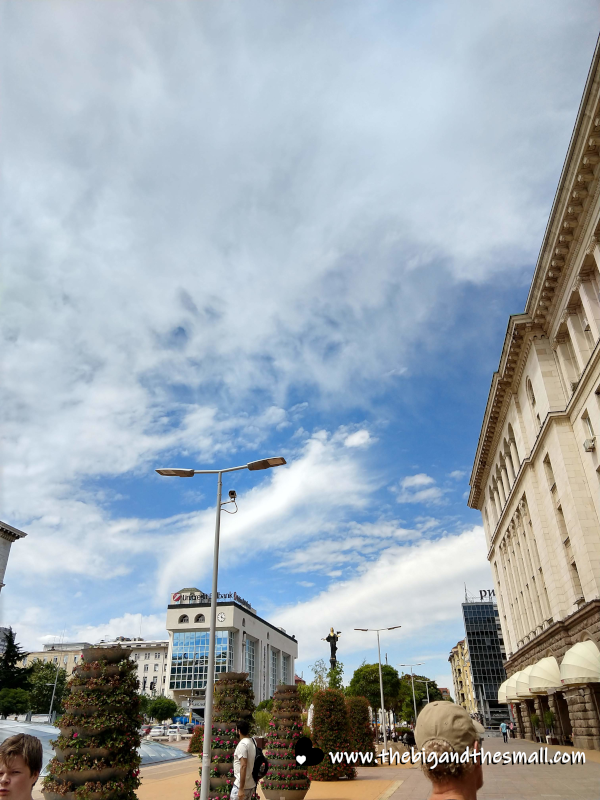 Just around the corner is a rather non-descript building that would seem unremarkable if it weren't for the impressively dressed soldiers guarding the door. This building is where the president of Bulgaria works (but not where he lives.) Bulgaria is a parliamentarian democracy so the president is more of a figurehead than anything else. The Prime Minister is actually more important (and more similar to the American idea of a what a president does.) 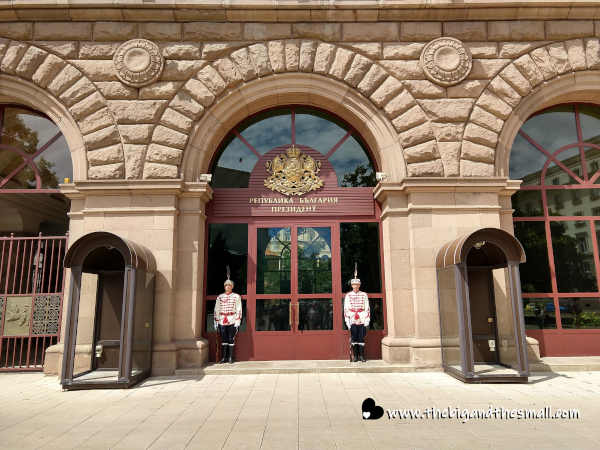 This next part made me really glad we were on a guided tour because I never would have thought we could go where we did. Just to the left of those fancy guards was an open gate (I definitely would have thought it was off-limits, though.) Dessi forged ahead and guided us through, and we found ourselves in a hidden square that was surrounded by former communist buildings. 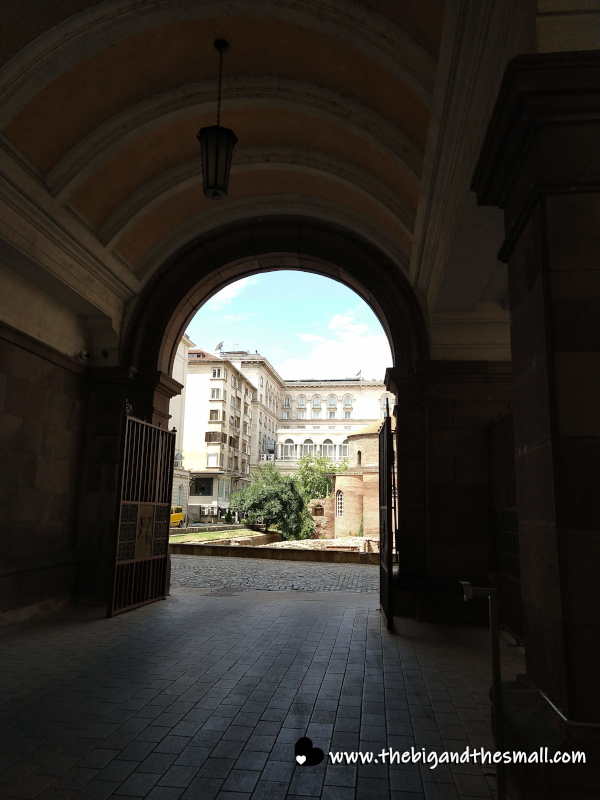 A quick note about the gates - on them are lions, which are the national symbol of Bulgaria. Dessi said it was an odd choice since the only lions ever to live in Bulgaria live at the zoo, but it made sense to choose a strong, fierce animal as a symbol. The lions on these gates are replicas of ones from ancient Roman drawings. It is believed that the artist might have been drawing a lion from imagination rather having actually seen one. Dessi said she thinks this particular rendering looks more like a demented house cat than an actual lion. I'll let you judge for yourself. 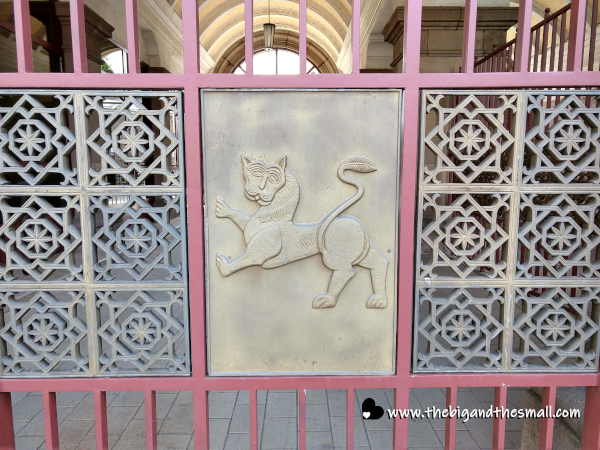 This square behind the gates contains the oldest building in the city of Sofia - currently, a church named the Rotunda of St. George. The building that still stands dates back to the 4th century and was built by the Romans. The ruins that surround it have no confirmed history, though it is believed that it may have been a pagan temple at one time. When communism ruled in Bulgaria, religion was not allowed but it was strongly discouraged. Cleverly, instead of destroying this church, they simply built around it, making it practically invisible to the general public. Additionally, not only was it "out of sight out of mind," anyone who did dare to go to the church did so under the watchful eye of several communist government buildings. 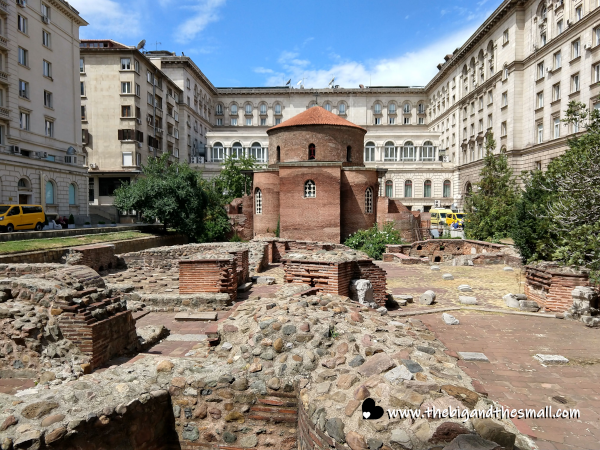 Dessi recommended that if we only went into one building after the tour, it should be this one, so we followed her advice. Unfortunately, photos are not allowed to be taken inside. It was smaller than I expected, but the ceiling was incredibly impressive. The ceiling has three layers of frescoes visible from various eras of the church. As far as I can tell the church does not still actively have services, but there were several booths selling icons inside. 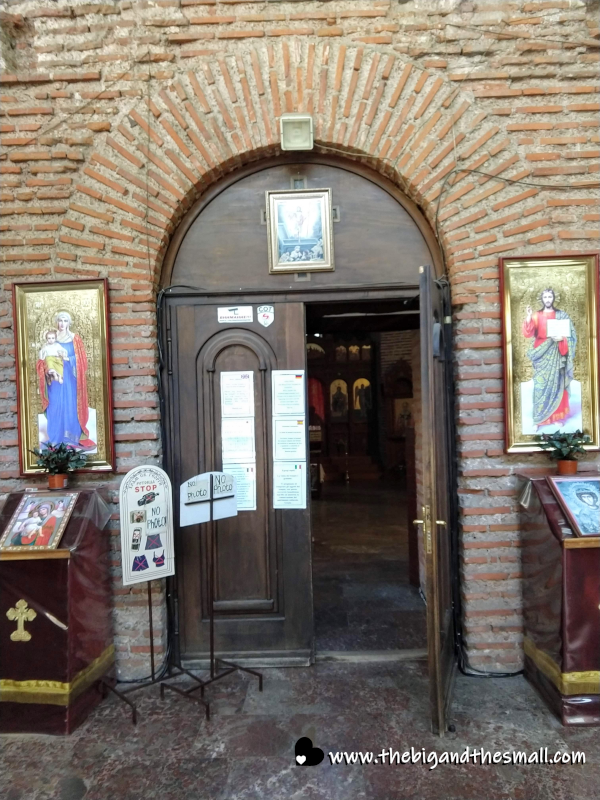 That's all for today, come back tomorrow for the third and final installment of our Free Sofia Tour!