I've been in hermit mode for most of our time in Sofia so far, but this week we decided it was time to bust out and actually explore the city! Thanks to a tip from a friend on Facebook we knew about a FREE guided tour given around the city center, so that was first on my list of things to do. We figured we could get oriented to the city, learn some history, and then go back to places we wanted to see more. We ended up having an amazing time and I cannot recommend this tour enough. If you are ever in Sofia you do not want to miss this! 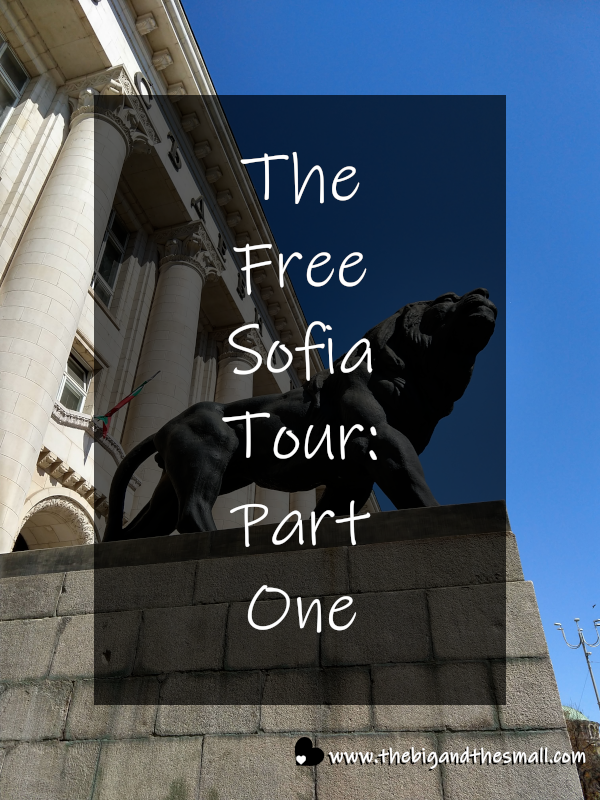 We started our day by figuring out the local bus system which turned out to be far easier than expected! Google maps is a lifesaver and I honestly don't know how people traveled before the internet and smartphones. Also, I'm not sure if we did something wrong but apparently traveling on the buses is free? We tried to pay our first driver and he waved us off, and then no one ever asked us for payment or checked for tickets or anything... I feel a bit guilty about that but we do plan to see more of the city this way! Here we are waiting at the bus stop that is right outside of our apartment! 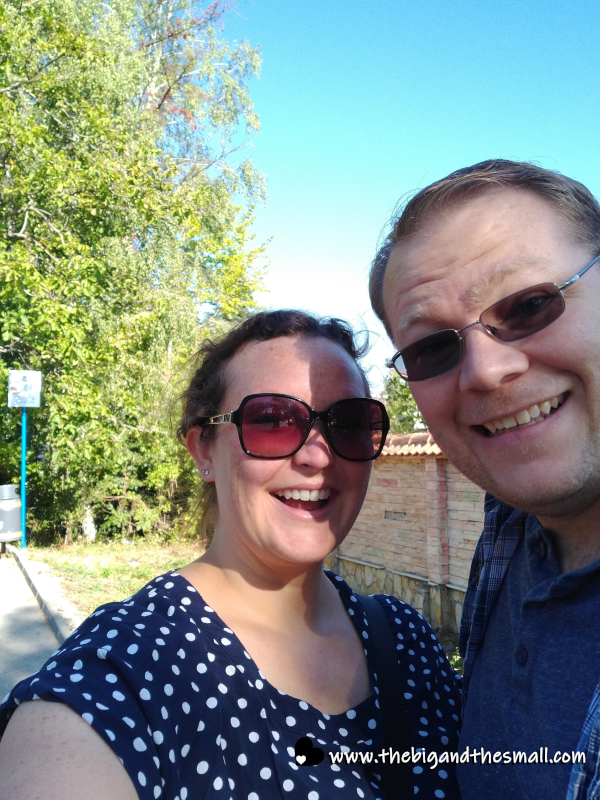 We took one bus then transferred to a second bus and within about 45 minutes we were in the beating heart of the city! We could have rushed to make the 10:00 tour but we decided to take our time to get to the starting point and go on the 11:00 tour. We grabbed a quick breakfast (I'll write about that later), popped into some charity shops, and meandered our way to the Palace of Justice, where all of the free tours begin. We waited in the shade until just before 11, here you can see the whole Palace of Justice and the huge crowd of people waiting out front for the free tour! 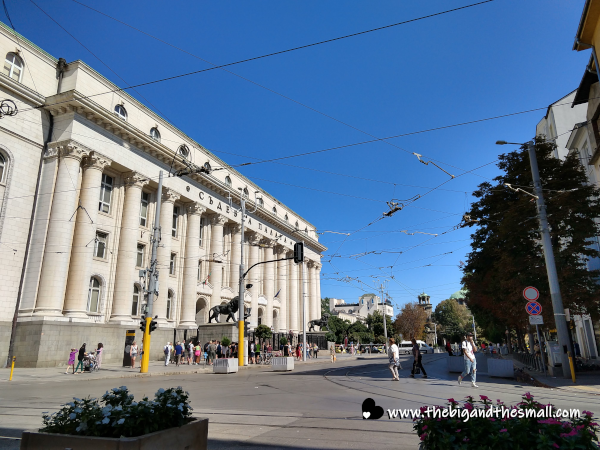 Thankfully the tour company was prepared for a large crowd so they had three tour guides ready and split us into three groups. The Free Sofia Tour is run by a company called 365, so named because they run these free tours of Sofia 4 times a day, 365 days a year. No matter the weather, rain, snow or shine, they are out there touring the city! (Like the US postal service, except it also runs on Sundays and holidays, lol.) Our guide for the day was Dessi, a 28-year-old born and raised in Sofia with a college degree in economics. She was smart, funny, spoke perfect English, and shared so many interesting facts about the city. I loved her! 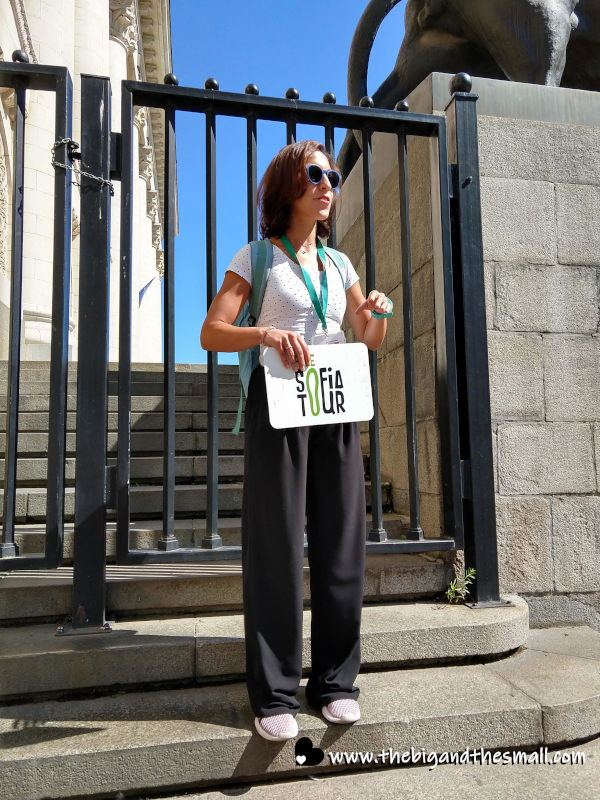 Our first stop on the tour was the Sveta Nedelya Church. On the steps of the church, Dessi shared a brief history of the whole city of Sofia - which is believed to be about 6,000 years old! Over the millennia Bulgaria has been independent, ruled by the Romans, independent, ruled by the Ottoman empire, independent with a monarchy led by a tsar, under communist rule, and finally for the last 30 years or so under a parliamentarian democratic republic government. This church exemplifies the architecture of Christian Orthodox churches in the city, of which there are many.

There is a dark history here, as in 1925 there was an assassination attempt on the tsar that took place in the church. The rebels who wanted to kill the tsar killed a high-ranking general, knowing that the tsar and many high ranking members of his court and the military would attend the funeral. For months previous they had been planting bombs in and around the church. On the day of the funeral, when the church was packed, they blew it up, killing around 200 people and injuring 500. The tsar, however, was spared, because he was late to the funeral that day. While it is a sad story, Dessi said it is well incorporated into Bulgarian culture, where people do not value being on time. They will often say that in part they don't mind being late because they never know when it will save their life! 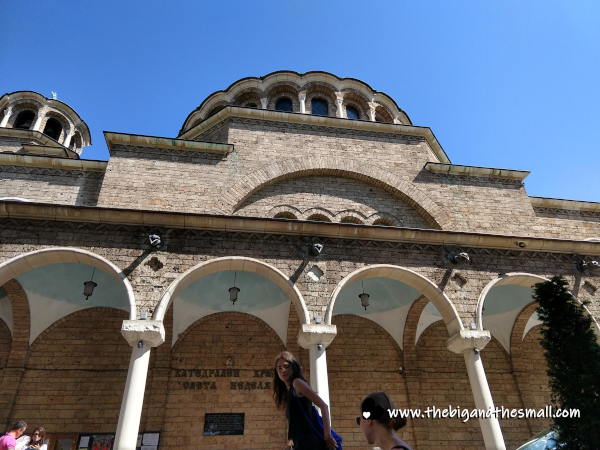 From there we went to an even older church that dates back to the 15th century. While from the outside the Church of St. Petka kind of looks like ruins, Dessi assured us it is still a functioning Christian Orthodox church! Why this is important will be made clear in just a minute. 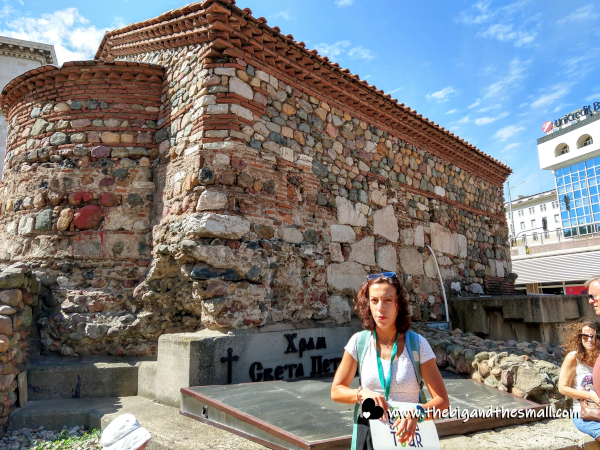 From this vantage point, we also had a great view of a massive statue that dominates the center of Sofia. The statue is of St. Sofia, though interestingly enough this is not the Sofia that the city is named for (that will come towards the end of the tour!)  St. Sofia is a Christian martyr who was killed for refusing to renounce her faith when Christianity was illegal in the Roman Empire. She was killed along with her three daughters - Faith, Hope and Charity. In the spot where this statue stands used to be a statue of Lenin during the communist regime. The Lenin statue was torn down shortly after communism fell but the statue of Sofia did not go up until the year 2000 as there was much discussion around what should take its place. 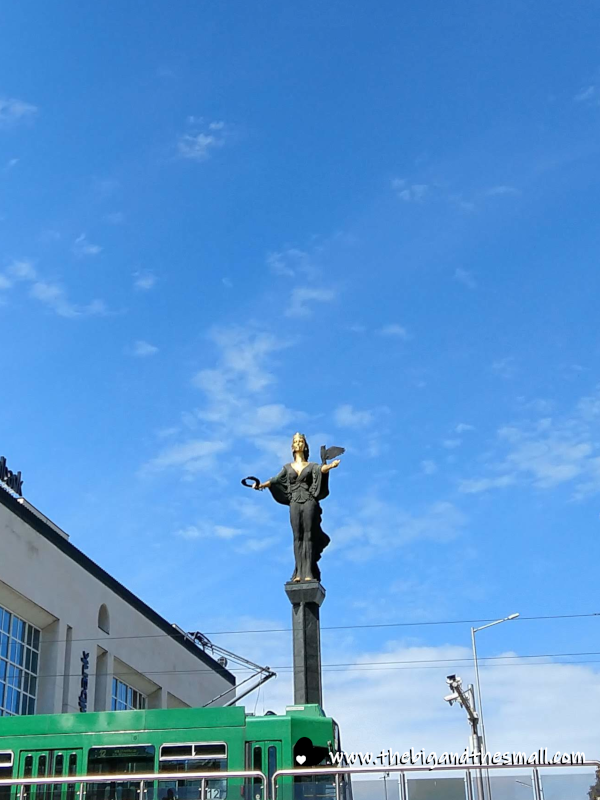 As we looked at the church and St. Sofia we were actually standing in the midst of some Roman ruins! Dessi said that when you go to many European cities (including many in Bulgaria) you will see an "old town" that contains Roman or other ruins, and a "new town" where the city currently thrives. Sofia, on the other hand, is a city of layers. Almost every time a new area is excavated for new buildings, Roman ruins are found from the city of Serdica which used to stand in this spot. The city is doing better at preserving these ruins when they are found, though Dessi said there have been some egregious oversights (such as an old colosseum that was built over - even though it was impressive at only 10 meters smaller than the one in Rome!) 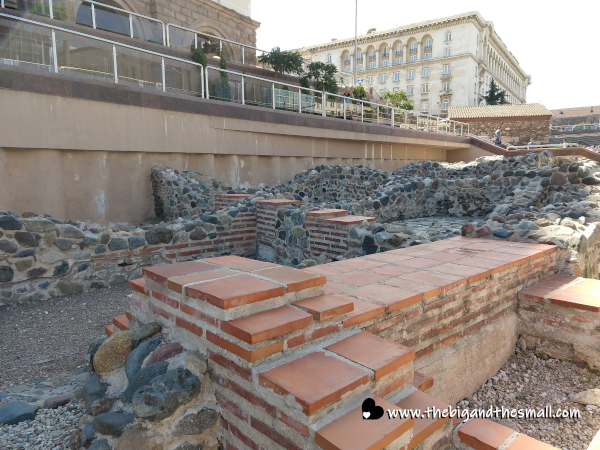 In some places the Roman ruins have been "enhanced" by the Bulgarians to either help preserve them or make them more impressive. Dessi clued us into a red line that could be seen running through some of the stone walls - this indicated where additions were made. Below the line is a true Roman wall, above the line is a section that was added in modern times. 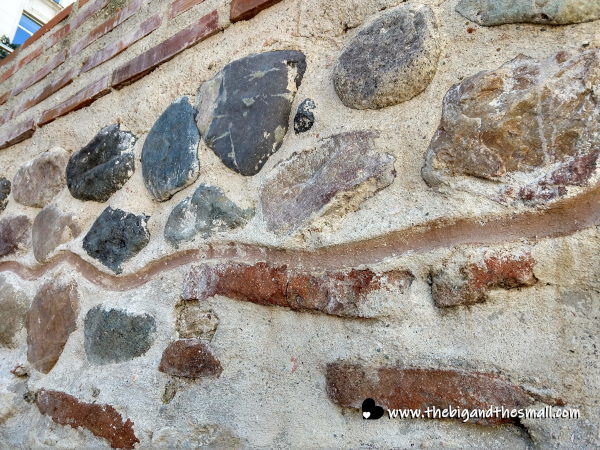 In another area on the tour, the metro system has been built over and around the Roman ruins. It was an odd juxtaposition to see the ancient ruins covered by a modern ceiling and lit by recessed lighting! 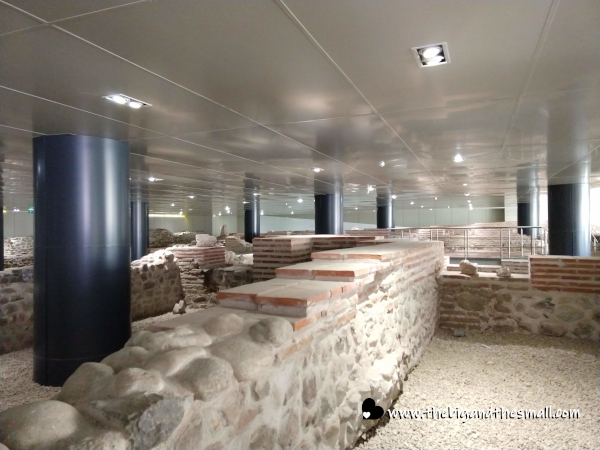 After the first section of Roman ruins, we moved back to higher ground where we had a vantage point of several more religious buildings. This one is the only mosque that remains in Sofia. When the Ottoman Empire ruled, Islam would have been the dominant religion in Sofia and all of Bulgaria. Nowadays around 85% of the population identifies as Orthodox Christian and only 10% as Muslim. However, Dessi said that in Sofia most of those identifications are just in name and not in practice. Like most big cities the majority of the population is not religious at all - and of course, this was heavily influenced by communism as well.* 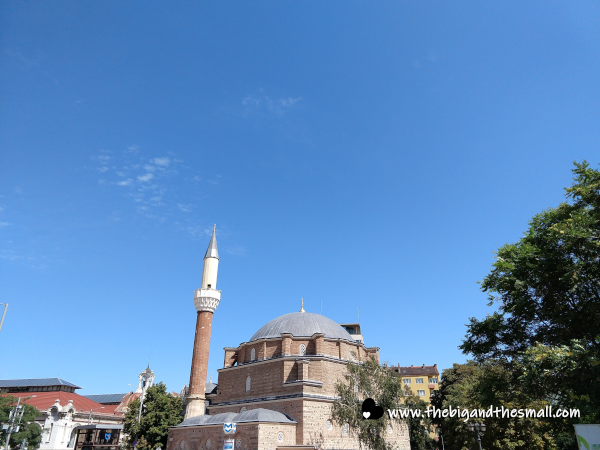 While standing to look at the mosque, we could also catch a glimpse of the only synagogue in Sofia (it's the green dome you can see just past the red roof.) This meant we were standing in what has become known in Sofia as the "Square of Religious Tolerance." It's not exactly a square, but within spitting distance of each other the synagogue, the mosque, and several Christian Orthodox churches (like the St. Petka mentioned above.) These religions have lived peacefully with each other in this space for hundreds of years, something which Sofia is very proud of. Dessi told us some amazing history about how Sofia kept 50,000 Jewish people safe during World War II, which I will share in a later post. The 365 company does a free tour specific to Jewish history on Sundays at 11 so we plan to return for that this weekend! 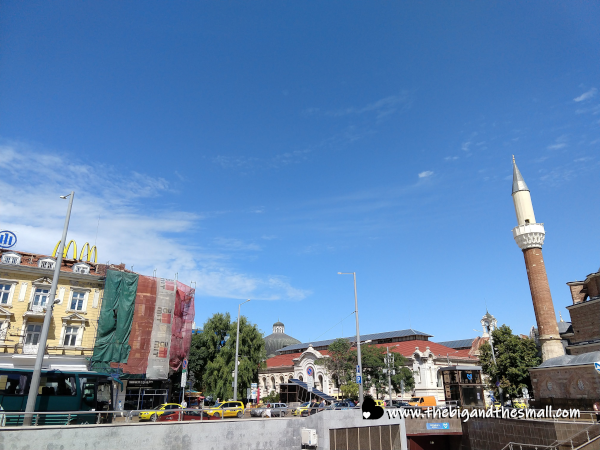 I learned so much on this tour that I couldn't possibly fit it all into one post, so I have divided it into three. Come back next week for more pictures and information on the fascinating city of Sofia! Of note - Dessi informed us that it should be pronounced Sofia with the emphasis on the first syllable, not Sofia as most of us would automatically pronounce it. I'm working on changing how I say it!

*Dessi shared a fascinating personal story about how her grandmother remained religious and continued to go to church even under the communist regime. She risked her job and her husband's job by doing so, but she persisted. She only stopped when in the mid-70's her niece was denied entrance to university and that was believed to be retaliation for her religious practice. She ceased going to church, the niece was admitted to the university, and Dessi's grandmother chose to practice her religious life in the privacy of her own home. To this day, she is now in her 80's, she only attends church on Easter, despite continuing to be a devout Christian.