McDonald's Around the World: Sofia, Bulgaria

We are slowly starting to get out of our nice apartment bubble here in Bulgaria, and actually explore our surroundings. We have big plans this week to get downtown and do a walking tour of the city! Until then, we were delighted to discover that there is a McDonald's within easy walking distance of our apartment, so we decided it was time for the next installment of McDonald's Around the World! 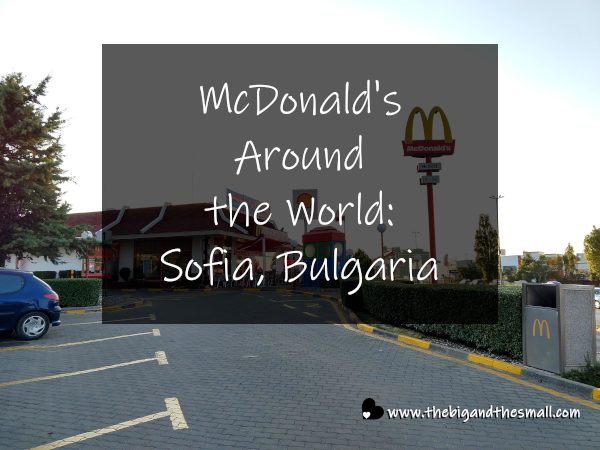 By easy walking distance, I mean that the distance was relatively short - only 1.1 km or a little over half a mile. However, it was all downhill on the way there. Which means you guessed it, it was all uphill on the way back. Crazy how that works, right? And I don't mean just a little hill, I mean this walk made it very obvious that we are living on the side of a mountain. Good thing by the time we were walking back I had fueled up on greasy carbs and caffeine! 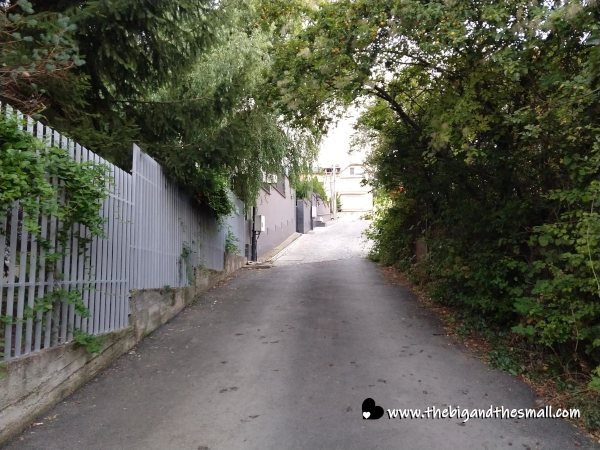 The walk there was really easy, and we went around dusk so the temperature had cooled off a bit from the high of the 90's. After winding our way through residential areas on the way down, we emerged on the side of a very major road. It's a good thing we were on the same side of the road as the McDonald's or I don't think we would have made it, as this road is not made for pedestrian crossing. I was starting to get hungry so I was excited to see the golden arches up ahead! 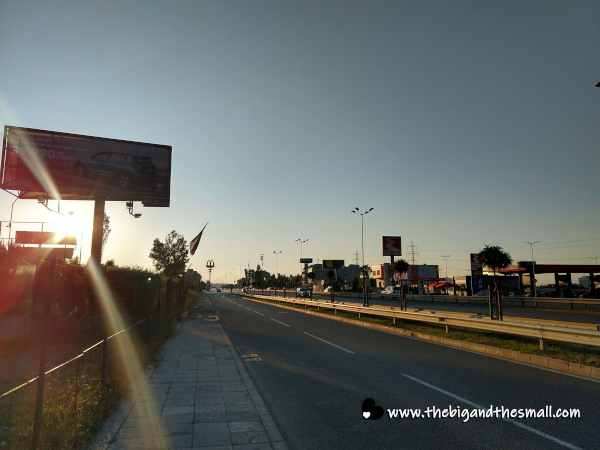 When we arrived I was surprised to discover that there were no order kiosks at this McDonald's! This is the first one we have been to outside of the United States where we actually had to talk to a person to place our order. Thankfully at least two of the workers spoke English, so it was a fairly straightforward process. We did take quite a while to decide what to get though, as the menu was a bit harder to decipher in Bulgarian. 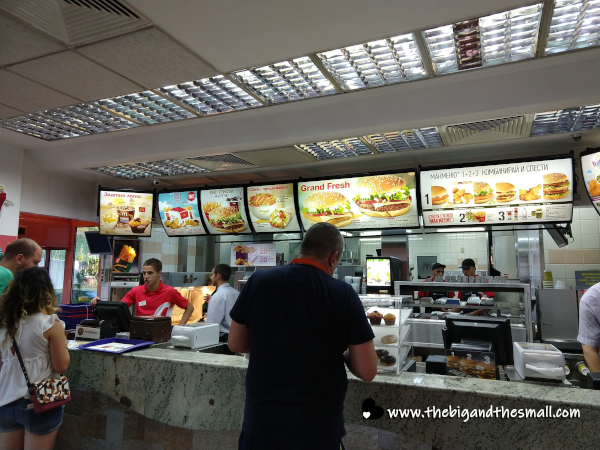 Eventually, someone pointed us to a teeny tiny menu on a side wall that had the translations from Bulgarian to English. After reading through it we realized there really wasn't anything too unique on offer here. It really just seemed like a standard American McDonald's menu, with the exception of one burger that looked somewhat different. So we ended up ordering the Grand Fresh burger, and a double cheeseburger meal. I figured if I couldn't have something uniquely Bulgarian I'd get my usual McDonald's order and compare that! Our total cost was 19.50 lev which was a little over $11. 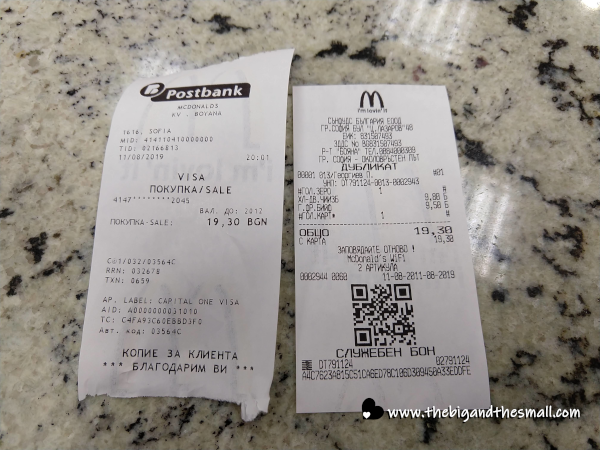 To be completely honest we did have a chance to get a unique Bulgarian drink - Ayran. This drink is a mix of yogurt and water that looks like milk. When the guy showed us the bottle we realized that Joel had actually purchased that at the grocery store a week earlier, thinking it was milk, and we did not like it when we tried it. (Maybe in part because we were expecting milk? It definitely ruined a cup of tea.) We were happy to have that mystery solved but stuck with getting a Coke Zero to drink. Joel waited at the counter to get our food while I went to find a place to sit. The inside of the McDonald's was a bit fancier than I am used to - there were real granite tabletops and potted plants all around! 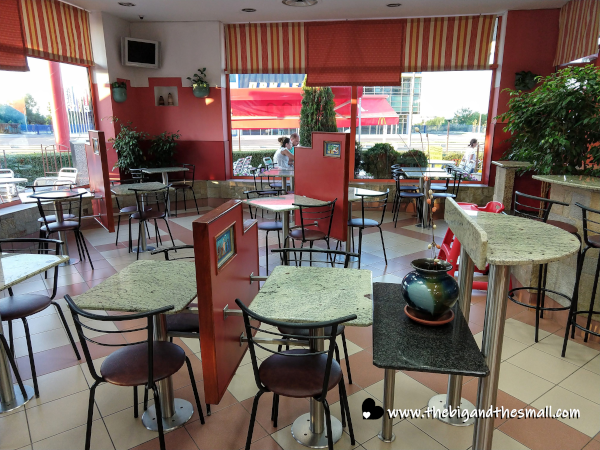 Our food came quickly and I was impressed with how hot and fresh the fries were - though I'm sure that's a result of our timing in ordering more than anything else. They tasted just like McDonald's fries should! (P.S. I saw a video on Facebook the other day on how to make your own McDonald's fries at home and it looked insanely complicated. I'm happy to just get mine at the real deal.) My double cheeseburger was also indistinguishable from one I would order back home. 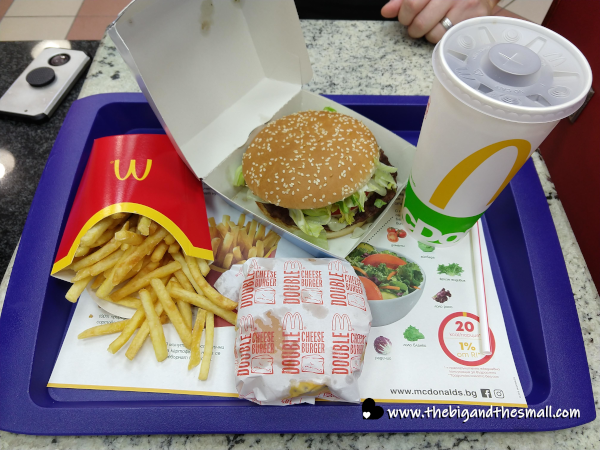 The Grand Fresh burger was a burger with lettuce, tomato, and cucumber instead of pickles. It also came with a ton of mayonnaise. Joel likes mayonnaise on his burgers so that wasn't a big deal for us, but I'm guessing the amount on there would have been way too much for most people. As I wrote this post I noticed in the pictures of the burger that it was also supposed to come with cheese - but ours did not! I really liked the cucumber on it - so much that I made a mental note to include cucumbers on my homemade burgers in the future. 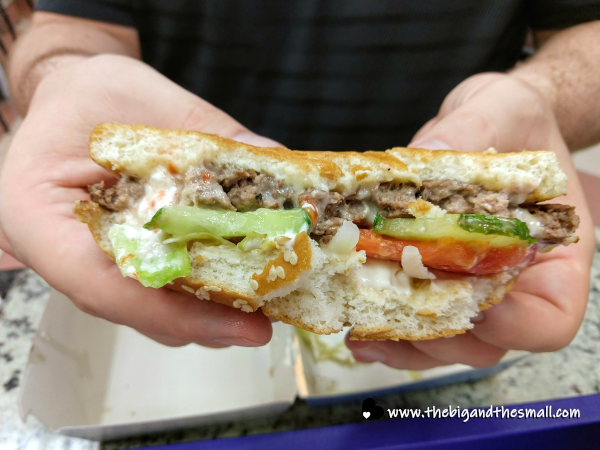 We've been eating a ton of authentic Bulgarian food here (I'll write about that eventually!) so it was interesting to make the switch to something more familiar for a meal. If I was craving true American McDonald's food this would really hit the spot, but we were disappointed that there wasn't really anything unique here. We'll just have to keep exploring the world and trying McDonald's until we do find something crazy!