When in Rome... The Airport

When we were planning what to do between my job interview in London and our next housesit in Bulgaria, we landed on a trip to Venice because it was actually the cheapest option when it came to flights and staying in an Airbnb. When it turned out our friend Yusef was near enough to Venice that we could stay with him, the trip turned even more budget-friendly! Part of that saving money aspect, however, meant that our travel from Venice, Italy to our final destination of Sofia, Bulgaria had a layover in Rome. An eight-hour layover. 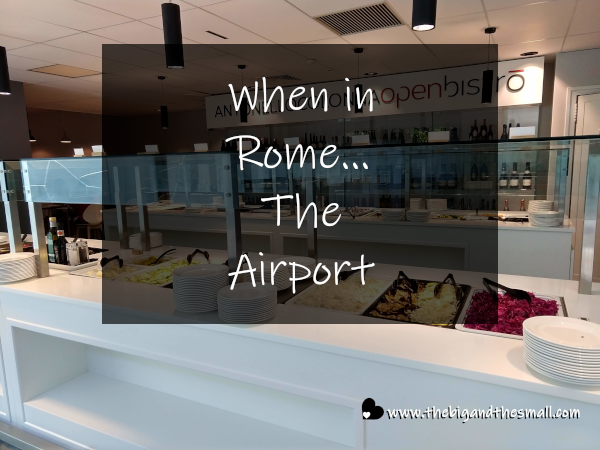 At first, we were rather optimistic about our Roman layover. I have a good friend who lives in Rome, who I would love to visit someday, and we were hoping that perhaps 8 hours would be enough time to meet up with Jenn, at least for a bit. But then we started looking into it. The carry-ons we take with us on the plane are too bulky for any amount of time spent exploring a city, so we would need to store them somewhere. Turns out this is possible - at the cost of €10 per bag, so that would be €30 total. There is an easy train to catch that goes from the airport to the center of Rome and costs only €8 per person. Not bad, until we do the math and realize it would be €16 each to get there and back, for a total of €32. So we were looking at spending €62 just to get to the center of the city unencumbered by baggage.

The train takes an hour there, and an hour back, plus time to get through customs on the way there, then through security again on the way back. With all of that Jenn estimated we might get about two hours in the city if we were lucky. Plus then we run the risk of trains running late or something happening and not getting back to the airport on time. My anxiety was ramping up. Eventually, I realized that when we live in the UK, we will be able to get flights from London to Rome for about that same €62 except we would be able to spend an entire weekend in Rome. At that point, trying to get into the city during our layover just didn't seem worth it.

It's been exactly ten years since Jenn and I spent a summer together living at a monastery just outside of Madison, Wisconsin. I wanted to catch up with her so badly but our reunion will just have to wait another year or two. Quality time together in Rome when that is our actual destination will be so much better than a rushed few hours while worrying about catching a flight. So all that to say, we spent our full 8 hour layover just chilling in the airport.

Our flight from Venice to Rome was uneventful except for the fact that it left at 6:30 in the morning. So we left Sef's at 3:30 in order to get to the airport in time to catch the flight. We arrived in Rome by 7:30 local time and our next flight was not until 3:30. So it was time to play the waiting game.

We were lucky enough to find a place to sit that had a charging station next to it, so we could keep our phones and tablets fully charged. We played on our phones, finished a movie we had started on my tablet, and mostly were bored out of our minds. Yes, I should have written a blog post that day, but I could not for the life of me get motivated to pull out my laptop and get work done. Eventually, the hunger set in, but we, being cheap, did not want to eat airport food, which is expensive.

We both killed some time wandering around the airport terminals we had access to while the other person watched the luggage. I was so hoping for a McDonald's or some time of fast food joint that wouldn't be too expensive. Instead, all I found were fancy cafes with €10 sandwiches, several fancy real restaurants, and gelato that cost more than twice what we paid even in Venice. Ugh. The only relatively reasonable option was a vending machine where we spent €5 for a sandwich and some salami/crackers which we split. Two hours later we were hungry again and debating whether we should find more food or tough it out till we were with our hosts in Bulgaria.

In the end, hunger won. One of the restaurants we came across actually had a buffet, which was intriguing as we don't see those a lot in Europe. The idea of getting to eat all we wanted sure was sounding nice right about then. Sure, it was €16 a person, but if we ate enough we could make it worth it, right? Joel decided to go scope it out and see what the food was like. He came back with tales of pasta, fresh bread, meat and vegetables, and dessert. I gave in, and off we went to a fancy, expensive airport restaurant. (Hey, we still saved money since we didn't go into the city, right?) 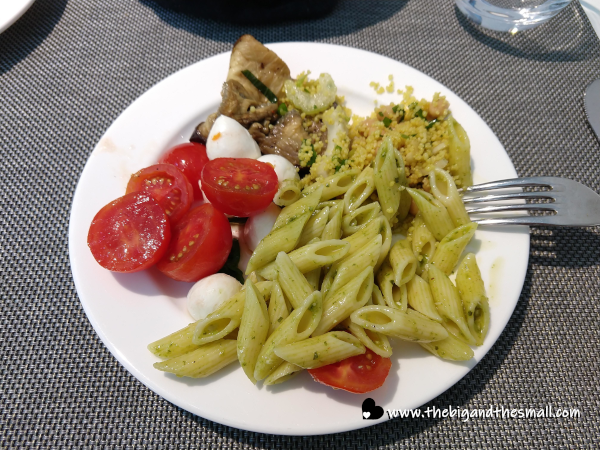 The food was incredible - definitely the best I have ever experienced on a buffet. It was all incredibly fresh and healthy, and I couldn't resist one last indulgence in pasta and copious amounts of bread with olive oil while in Italy. I balanced it out with tons of tomatoes with fresh mozzarella, sauteed spinach, zucchini, and eggplant, eating all the vegetables I could find. 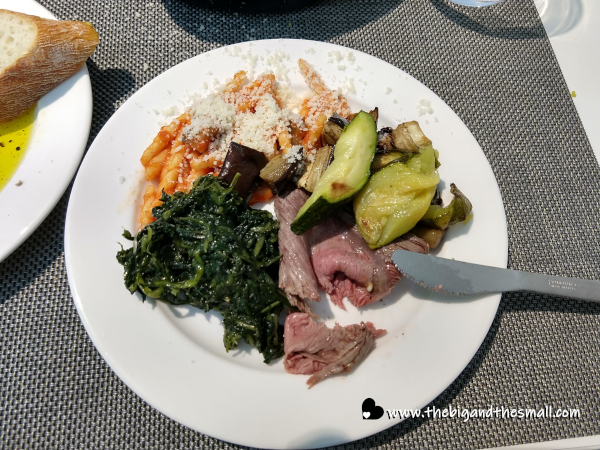 The best part of the whole thing, however, was the dessert. I am not a big dessert person it should be said, especially when pasta and bread are around, but these desserts were amazing. I loved that they were small, practically bite-sized, so I could try more than one. The chocolate square was a decadent chocolate cake that practically melted in my mouth. But the white dessert was even better - it was a small sugar cone filled with some sort of white mousse then dipped in white chocolate. It was impossible to bite into without making a huge mess, but oh so delicious. After our first round of dessert they ran out, and we waited a good twenty minutes for them to bring more out because it was just that good. 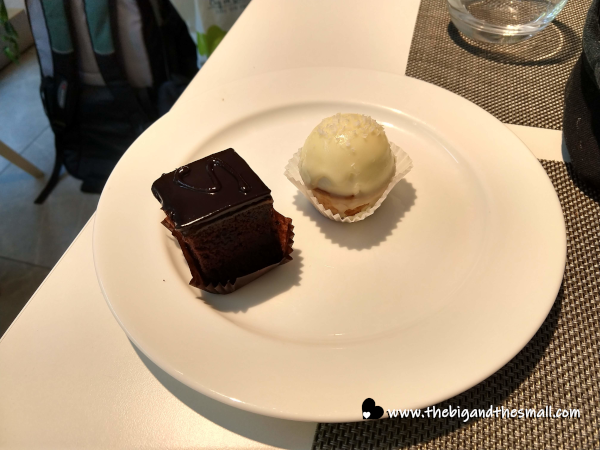 By the time we were done eating it was time to head to our gate (yes, we spent that long debating whether or not we should even go to the restaurant) and then it was off to Bulgaria! The flight went smoothly, as did getting through customs and picking up our baggage in Sofia. The border agent barely asked us any questions or gave a second glance, we just went right on through!

In a weird turn of events, due to our busy summer travels and the busy travel schedule of our hosts in Bulgaria, we never ended up talking to them over Skype like we have for every other housesit we have done. So needless to say we were a bit apprehensive about meeting people we had only ever emailed/texted with before. Turns out we had nothing to worry about as our hosts, Cassie and Matthew, and their little dog, too, are fantastic! I'll share more about them tomorrow!