I Scream, You Scream, We All Scream For... Gelato!

I'm pretty sure at this point I'm writing this post just to torture myself, as I am currently in Bulgaria and no longer have access to daily doses of gelato. Even so, I wanted to round up all the delicious gelato we tried while we were in Italy so I can remember which ones I want when we go back (and we will go back at some point) and give you some ideas of what to try when you go! 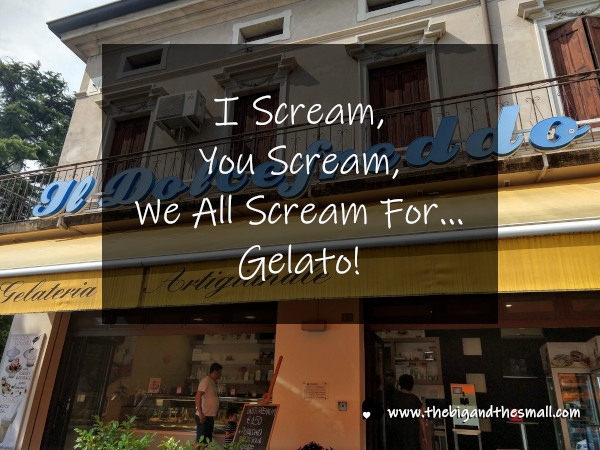 Interestingly enough, our first taste of gelato ended up being my absolute favorite of our whole trip. We randomly chose a gelato shop near our hotel, and when we couldn't choose between the 15+ flavors on offer, we asked the ladies behind the counter for their favorite. They unanimously suggested Pistachio so we went for it and boy am I glad we did. What made this gelato so special is that it wasn't just pistachio flavored - it had something on top that I would describe as a pistachio fudge, Joel thought it might have been a pistachio butter. It was dark green, thick, and added the most amazing flavor to the gelato. You can see just a bit of it swirled into our scoop! 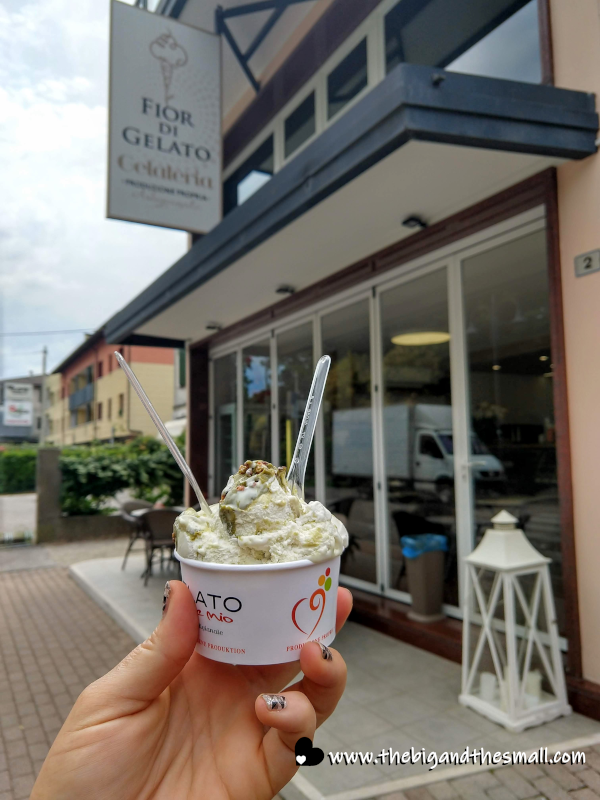 Later that day we went back to the same shop and took the ladies up on the suggestion of their second favorite - something called Paradisio Crema. I don't really know what that means flavor-wise but I can tell you it was good! Not quite as good as the pistachio but a close second. It was incredibly creamy and really refreshing. We tried it in a cone this time but that made me realize I always prefer a cup. We also tried a third flavor on our third trip to the shop that day, but the lemon was disappointing and apparently not even worth a photo. 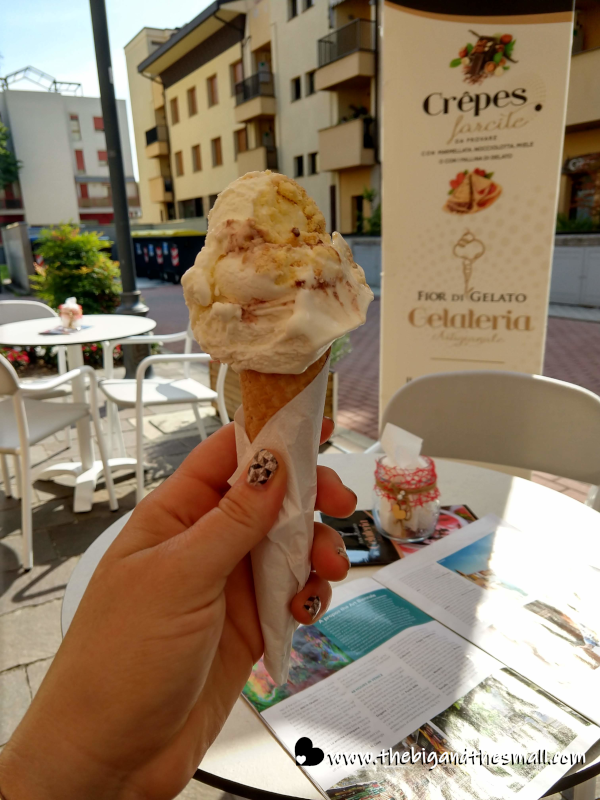 Our next taste of gelato came from a shop near our friend Yusef's house. This time Joel and I got each got a flavor to try, then shared. He went for hazelnut which tasted like it had some Nutella swirled in and was great. I went for one I don't remember the name of but it had biscotti cookies in it. I loved the extra crunch contrasted with the creaminess of the gelato! 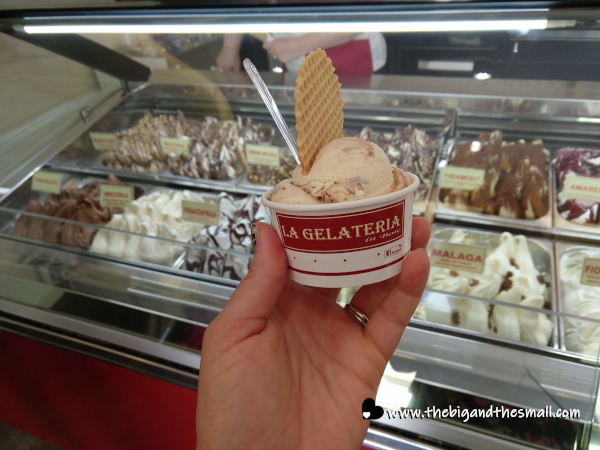 The next day was Venice and we also managed to have gelato three times in one day. This first batch was two scoops in one cup, and for the life of me, I can't remember what the flavors were! Since they aren't memorable they must not have been pretty great, right? That's my story and I'm sticking to it. 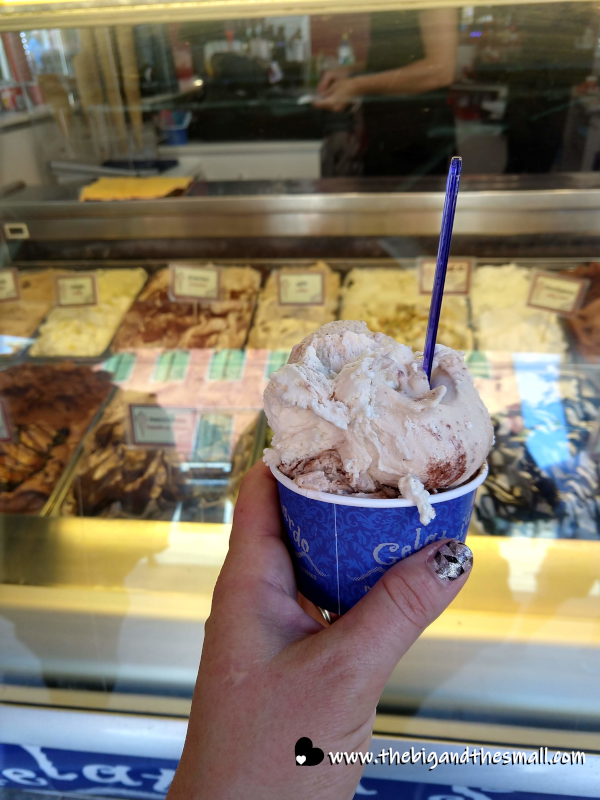 This next taste was probably the least impressive gelato on its own, but by far the most impressive way of serving it. This shop makes fresh bubble waffles then rolls them up to serve as the cone for the gelato - a literal waffle cone! The waffle was still warm which made the gelato melty, and it came topped with one sauce and two toppings of your choice - we went with fruit. The flavors we got were pistachio (nothing compared to the first one, it didn't have the special green stuff) and stracciatella which is chocolate chip type flakes. When we left Venice we convinced Sef to go back by our hotel to the original gelato shop where we got more pistachio and paradisio. 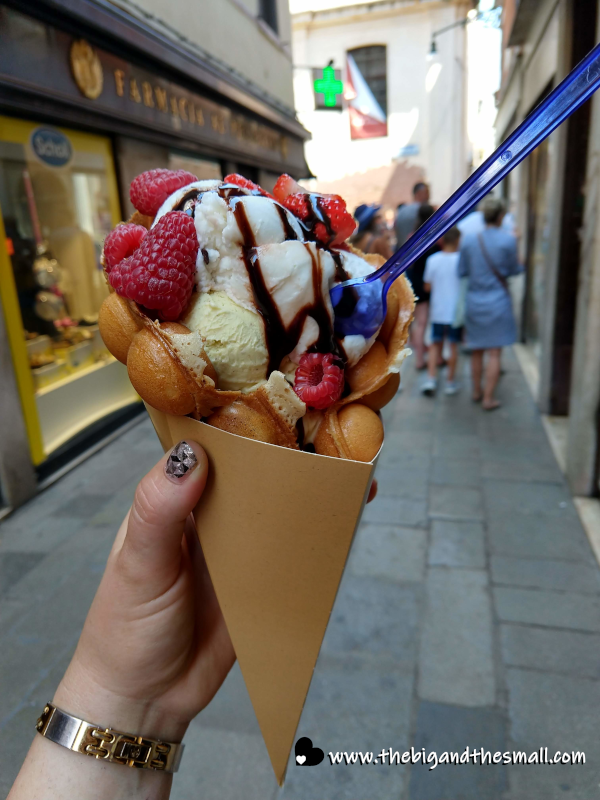 The next day we stopped at a gelato shop on our way back from the mountains and Joel and I managed to try four different flavors in one trip! For the first round, I got a scoop of dark chocolate and Joel went for the incredibly unique flavor of matcha green tea with ginger marmalade. The dark chocolate was good but incredibly rich - almost too rich, really. Joel did not care for the green tea flavor unless he got a bite with a nice chunk of the ginger marmalade, then he loved it. (I thought it was just yucky all around.) 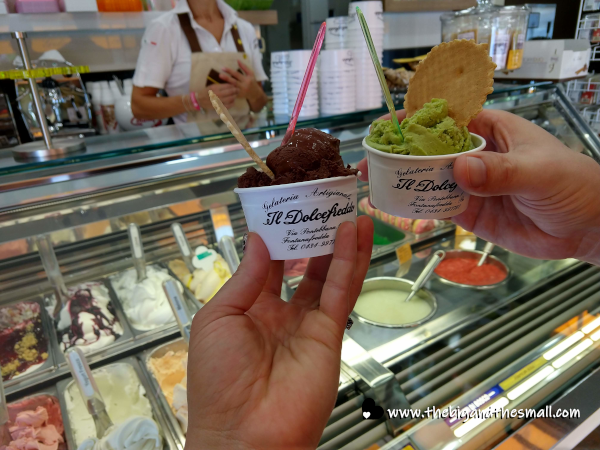 For the second round, I went with strawberry cheesecake and Joel got mint. I hadn't finished my dark chocolate scoop so I tried a bite with the mint and there we had a winner! I actually don't like mint flavored things except for one exception - Thin Mint girl scout cookies. Well, the dark chocolate/mint combo was like a Thin Mint in gelato form and I was hooked! The cheesecake gelato was also incredible and would make my list of top five flavors for sure. 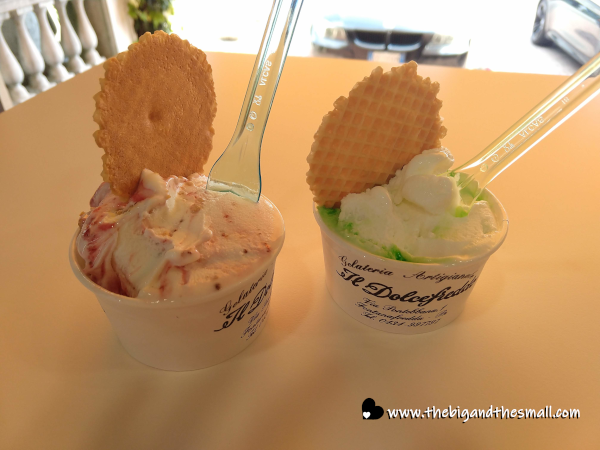 On our last day in Italy we mostly hung out at Sef's watching movies but we convinced him we had to go out for gelato one last time. Sef got a cheesecake flavor, convinced by my cup the day before. Joel went for toffee, which was good but not exceptional. And when I saw this place had peanut butter flavored gelato - complete with jars of Jif for sale! - I got a scoop of that and a scoop of regular chocolate. I love a good peanut butter/chocolate combo and this was no exception. It was a great way to end my love affair with gelato! 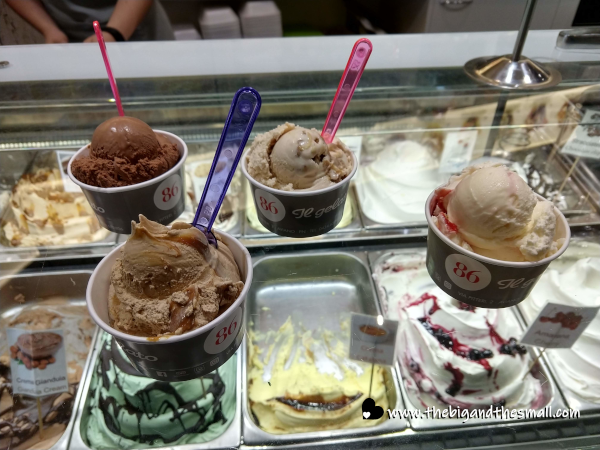 My true love, however, will always be that first pistachio gelato with the green fudge on top. Not all pistachio gelatos are created equal (as I learned in Venice) so I fear I will forever be on the hunt for this flavor again.

Also, here is my big tip when ordering gelato - always get just one scoop at a time. At least where we were the price was the same for one scoop whether you got 1 or 4 at a time (no discount for multiple scoops like many American places do.) When we ordered just one scoop, they would fill up the cup. When we ordered two scoops, they would fill up the cup with just a little bit extra. We definitely felt like we got more value for our money ordering one at a time, which is why we started doing that when ordering more than one flavor. Bonus - instead of multiple flavors melding as they melt, you get to try each one individually and then just mix them together if you so choose.

Have you ever tried gelato either in Italy or elsewhere? What's your favorite flavor? Of the ones we tried, which one sounds the best to you?