Day 3 in Italy was an action-packed day spent in the iconic floating city of Venice! When we originally purchased our tickets we thought we would spend our whole time in Italy actually in Venice. However, when we found out a friend lived nearby and we could stay with him we altered our plans and we are glad we did. Not only did we save money, but we also got to see a friend and explore more of the country. Plus we had a guide when we spent one full day in this grandiose and gorgeous city! 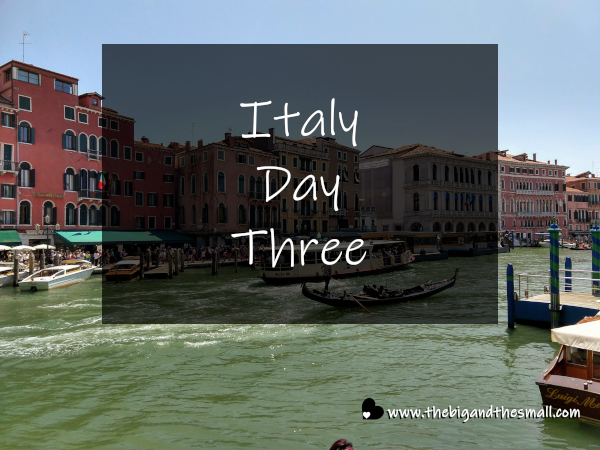 It took us about 45 minutes to get close to the city in Yusef's killer BMW. We parked in a nearby garage, took a short walk across a square, then crossed a bridge and suddenly we were in Venice! The city was just like I remembered with picturesque canals, cobblestone streets, and the world-famous gondolas. I so wish we could have taken a ride on one but at €80 for an hour-long ride, it just was not in the budget. Instead, I just admired them every time one floated by! 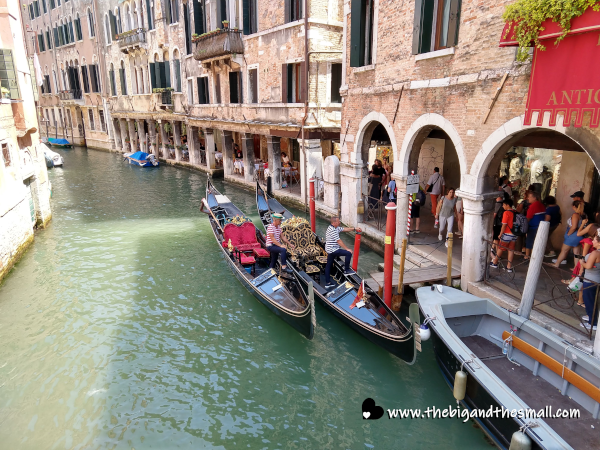 Sef had a few places he wanted to take us in particular, and we discovered a few more fun places as we wandered the city, one of which was an art gallery! We wandered inside to get out of the sun and heat, though without air conditioning it ended up being even hotter inside. There were so many incredible pieces I wish I could share them all, but I'll just share my favorite. This portrait of Nelson Mandela was made by burning pieces of paper until the image was created. What an incredible technique! 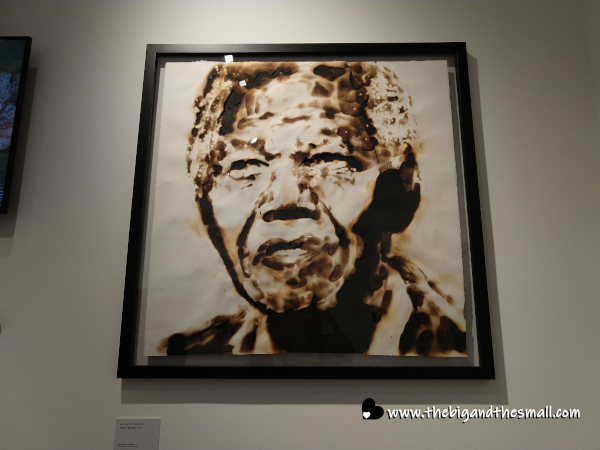 The bright side of the stuffy building meant that when we stepped outside it magically felt cooler than before. We also made a practice of sticking to the shade as much as possible. One place Sef wanted to take us in particular, a pub that has been open since the 1400s turned out to be closed by the time we got there, which was disappointing. But our next destination was open and busy! This place is called the Aqua Alta Libreria. 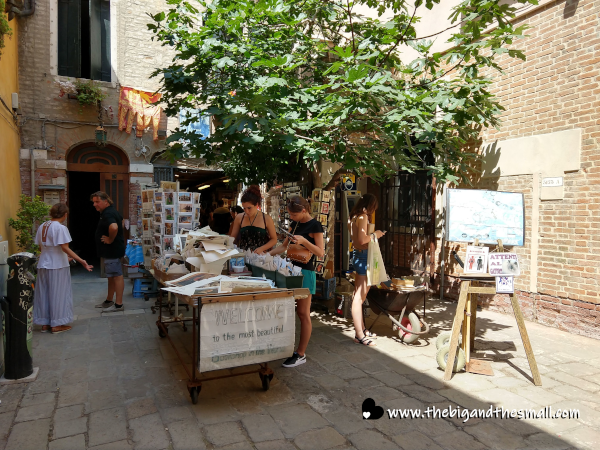 It is a famous bookstore in Venice, known for its unconventional book displays, including these ones piled into an actual gondola in the middle of the store. The place is so packed the aisles really fit only one person, which made it tough to navigate at mid-afternoon on a Saturday. 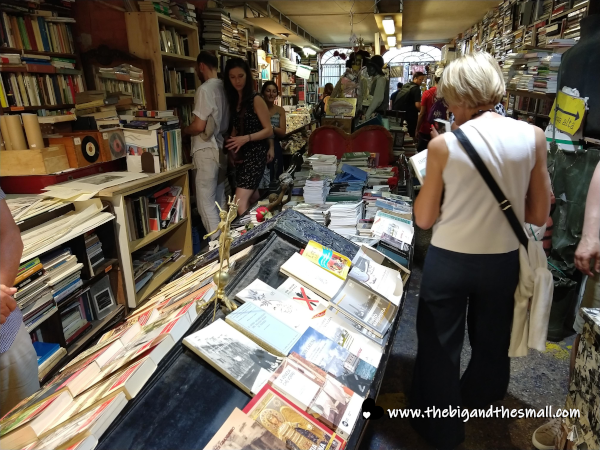 The title of the book store is also interesting - "Aqua Alta" is the Italian name for the flooding that often happens in Venice. The water can sometimes get as high as two feet into the buildings, and the bookstore plans accordingly by making sure all the books are at least that high off the floor. 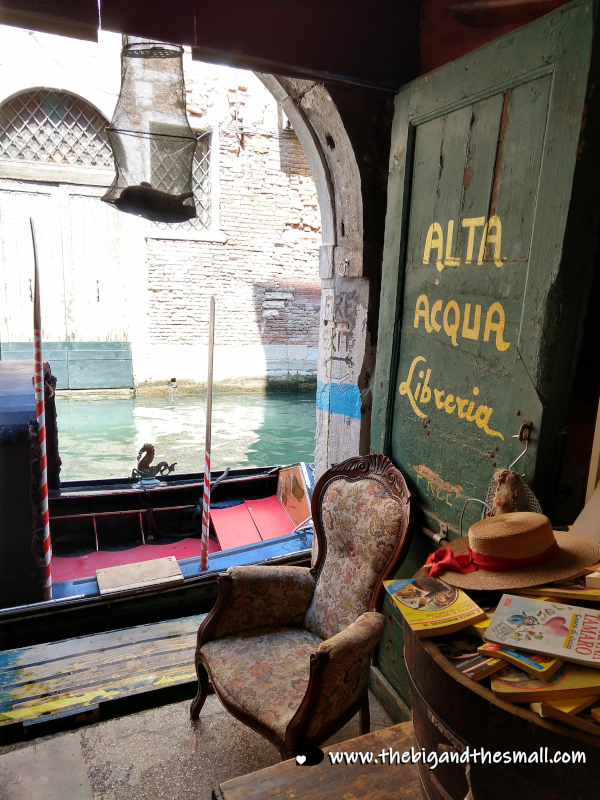 After the bookstore, we made our way to the world-famous Rialto Bridge. This bridge is an incredible feat of engineering because it is not just a bridge, it also contains shops on both sides! This picture shows the stores and also the amount of crowding we were dealing with that day. 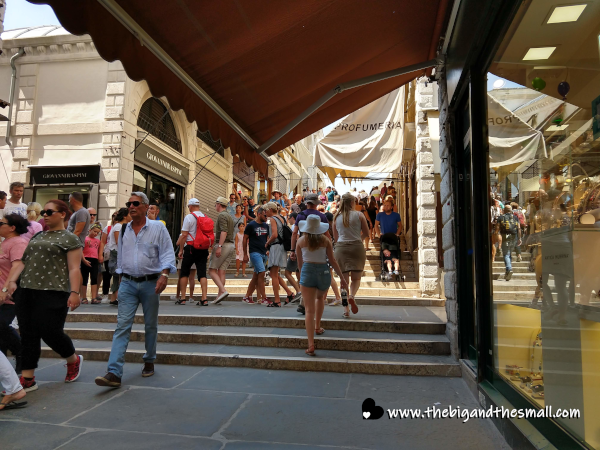 While we were at our hotel in Venice I read in a magazine a story of the Rialto Bridge that was fascinating yet tragic and devastating. The city held a contest for bridge designers in the 1500s after previous iterations of a bridge in this location had failed. Legend has it that the designer of the winning bridge plans actually made a deal with the devil in return for the design. The deal was that the devil would get the soul of the first person to cross the completed bridge. In an attempt to try and deceive the devil, the designer made sure a chicken was the first being to cross the bridge. In retaliation, the devil tricked the designer's pregnant wife into crossing the bridge. The story goes that the wife ended up having a stillborn child, and the child's soul haunted the bridge for centuries. 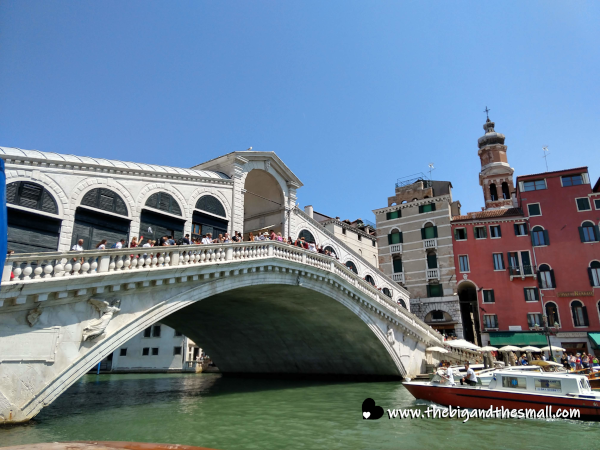 By this point, we had walked many thousands of steps through the city, and I was starting to get hungry. (Okay, we had also eaten gelato twice.) I found myself needing something more than sweets, so when I spotted a place that was making and serving fresh pasta, I convinced Sef and Joel it was time to eat. 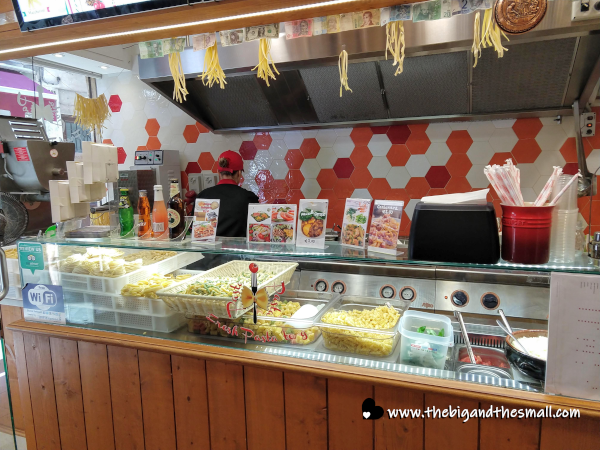 We literally got to watch them making pasta as we stood in the restaurant waiting for our orders. Joel and I ordered the special of the day which was rotini with a bolognese sauce, while Sef went for a pasta carbonara. It was so fun to watch the machine turning out little pieces of rotini, and knowing we would be eating that shortly! 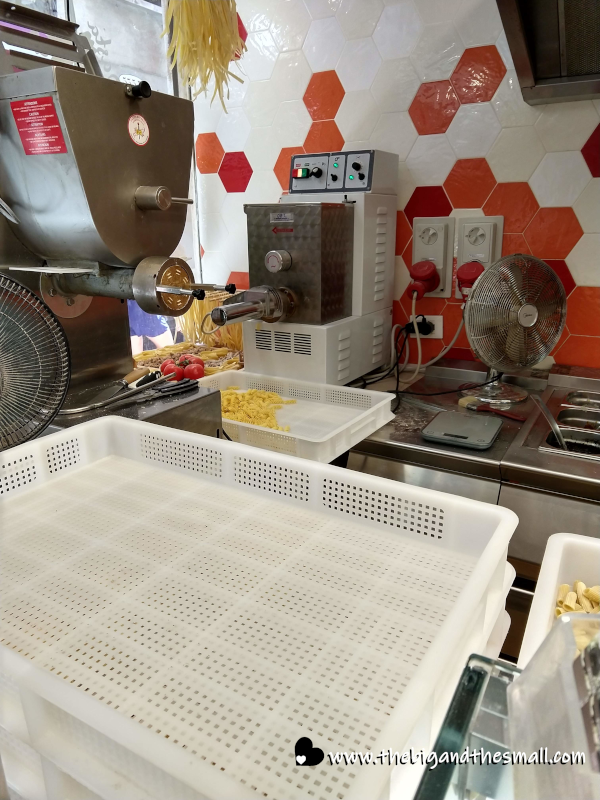 Our pasta dishes were ready in less than ten minutes and let me tell you this is probably the best pasta I've ever had in my life. It was cooked perfectly al dente and the sauce had a richness and depth to it that kept me coming back for more. I could have eaten buckets of this! 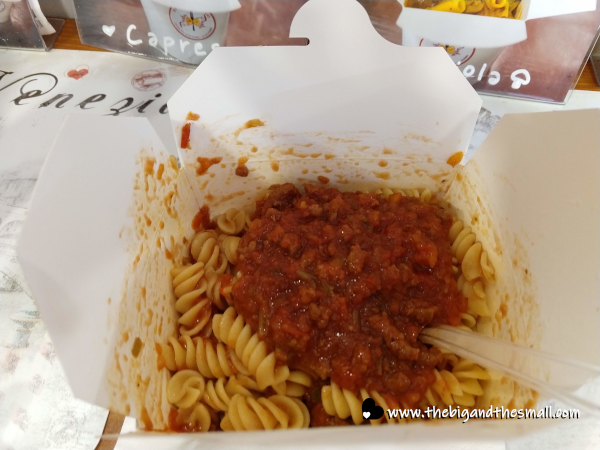 Newly fortified with yummy pasta, we had the energy to keep exploring the city so we made our way to perhaps the most iconic part of Venice - St. Marks' square. The square is ringed with famous buildings that are so stunning pictures do not do them justice. The first one we marveled at was St. Mark's Basilica - groundbreaking for this church occurred in 978 and it was finally consecrated in 1117. 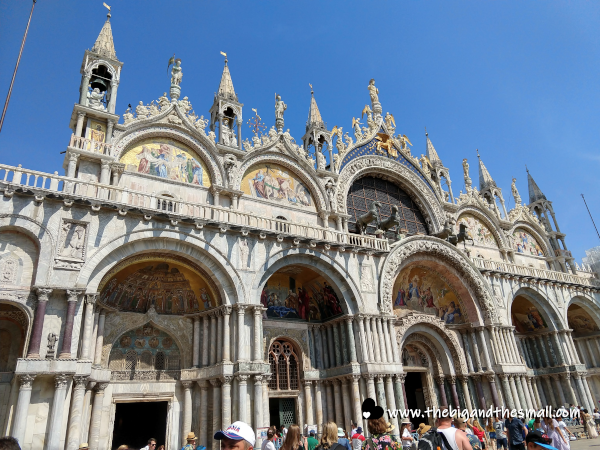 Another famous structure is the bell tower. The line to go to the top wrapped around the building so we decided not to go up, but you can imagine how breathtaking the view would be from up there. 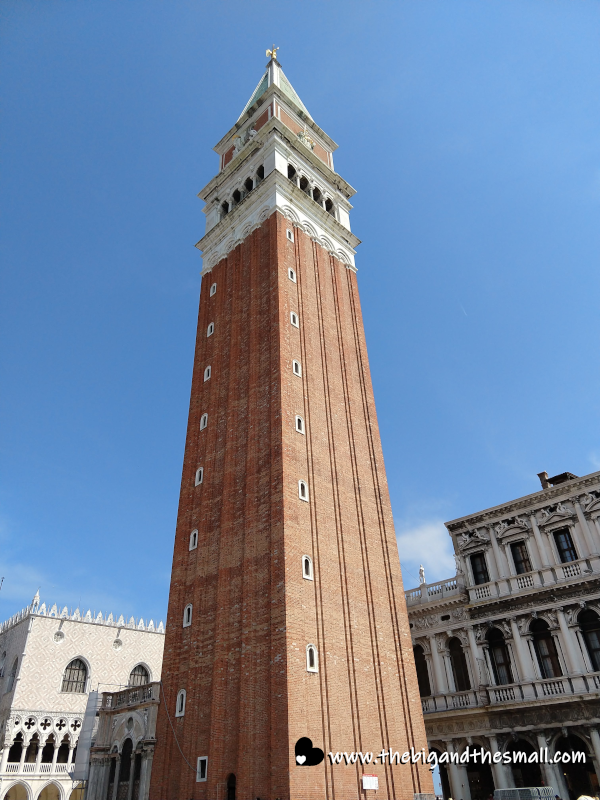 Another gorgeous structure that lines the square is the Doge's Palace - built in 1340 as a residence for the Doge (Duke) of Venice but operated as a museum since 1923. Can you imagine living somewhere like this as your house? It blows my mind. 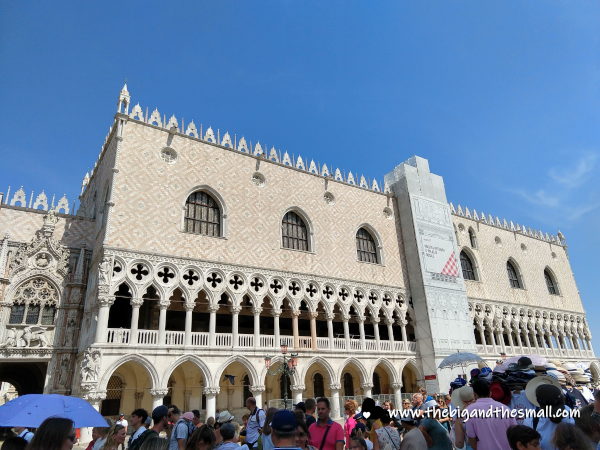 From the square, it's an easy walk to a bridge that gives you a great view of another famous Venetian bridge, the Bridge of Sighs. This enclosed bridge was a walkway that convicted criminals would have to go on in order to enter the prison. The bridge is so named because of the heavy sighs prisoners would exhale as they caught their last glimpse of freedom. 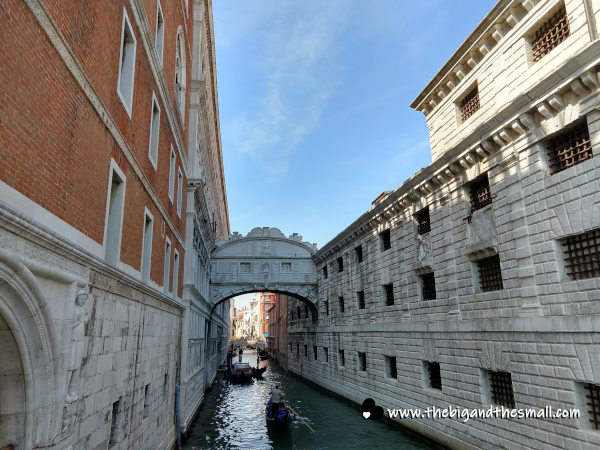 The view from the Bridge of Sighs is actually pretty incredible as it looks out on the Grand Canal. We took a selfie with Yusef to celebrate a successful day in Venice! While our smiles are pretty big here, we were all getting pretty wilted after a long day of walking in the hot sun. Shortly after this we made our way back to the car and headed home (after a stop for more gelato, of course.) 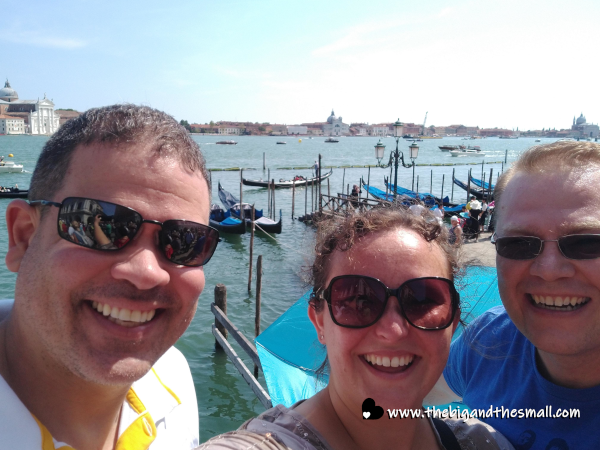 Yusef's smartwatch kept track of our steps for the day and by the time all was said and done, we walked a total over of 12,500 steps! Since that equals roughly six miles it's no wonder we were exhausted by the time we got home.