After a late night getting back to our friend Yusef's house, we were all grateful for a chance to sleep in and a slow start to the next day. Sef took a few days off of work so he could show us around his area of Italy, and we were excited to see what he had in store! 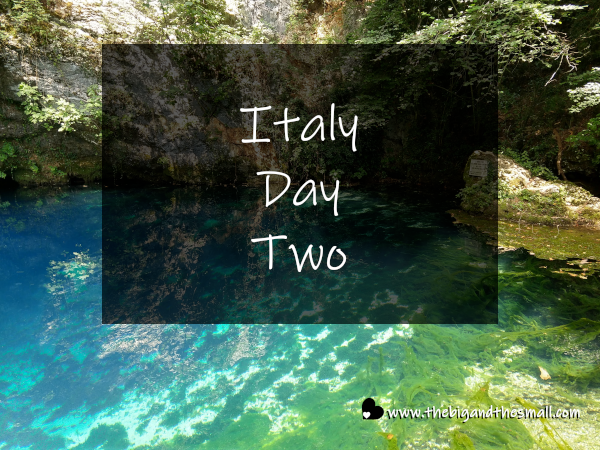 When we all were finally out of bed and dressed for the day we gathered in the living room, accompanied by Sef's adorable puppy, Fendi. Fendi is a Bernese mountain dog and only about 8 months old, so even though she is a small giant, she definitely still has the energy and craziness of a puppy! She wiggled around so much and all the time that this was one of the best pictures I could get of her. She was so super sweet and always looked like she was smiling. 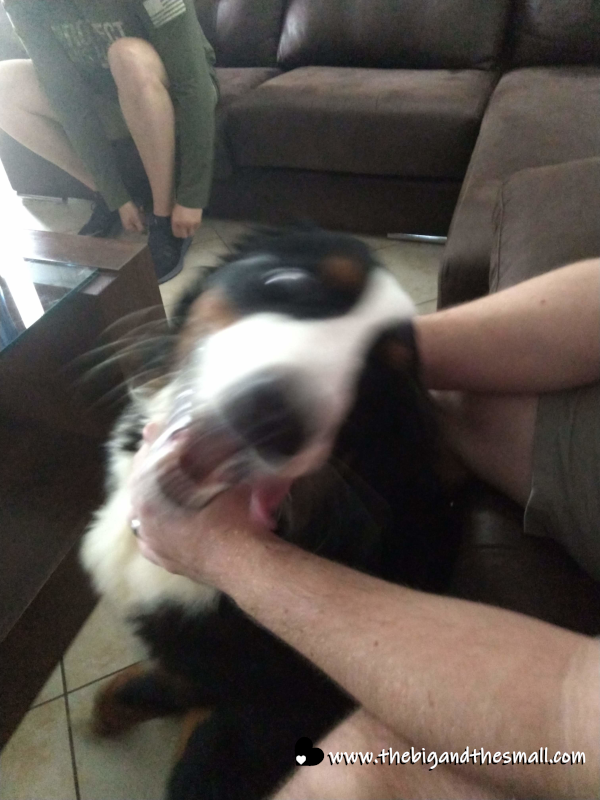 It's rather appropriate that Sef has a mountain dog since he basically lives in the mountains! Though he is in Italy because he is stationed there with the Air Force, he lives in off base housing. You can see the mountains right behind the house, and he has a view of them from the front as well. That balcony was off the guest room on the third floor and when I stepped out there in the morning I was treated to the most amazing view. 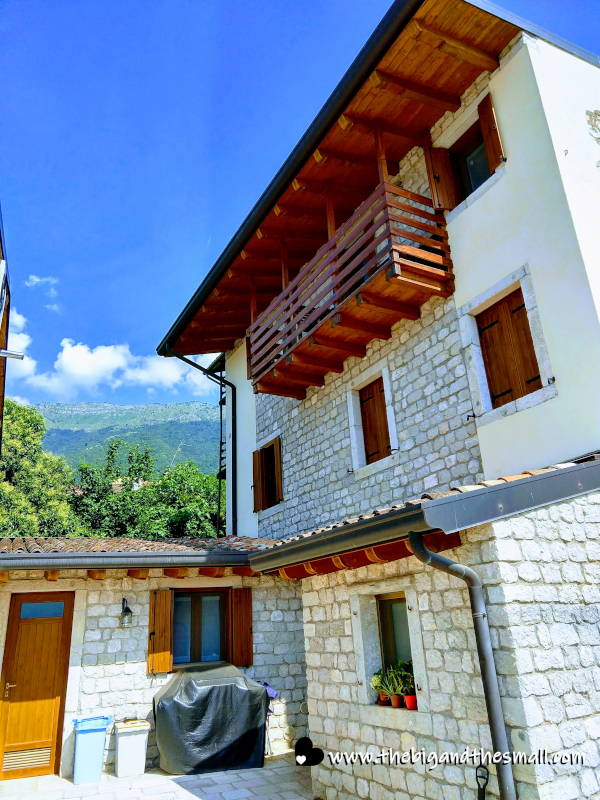 Our first stop on Sef's agenda for the day was pizza! Heck, yes. He said he has tried pizza all over Italy, both locally and when he travels, and this place nearby is his absolute favorite. We could tell, too, as when we walked in the wait staff immediately recognized him. 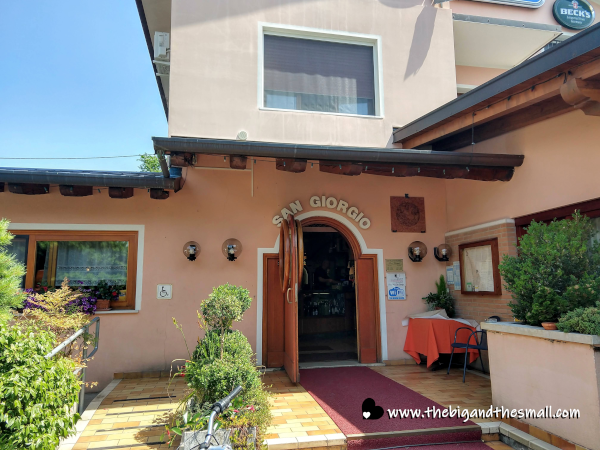 When it came time to order I was overwhelmed with the options available, so I did what Joel and I love to do and asked the waiter what his favorite pizza was. He said that his favorite wasn't actually on the menu and asked me if I was willing to have him surprise me with something. Um, yes, please! He asked if there was anything I don't eat and my only answer seafood. I'll eat just about anything else, especially if it's on a pizza. I am so glad I went this route as my pizza came out and it was perfection - two different kinds of salami, mushrooms, and extra cheese on top. It's absolutely something I would have ordered if I had seen it on the menu. 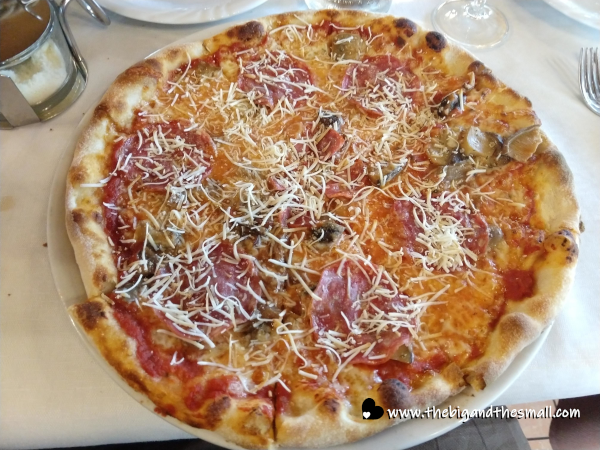 For Joel's choice, he decided to follow Sef's lead and get a pepperoni pizza. Except it was called something different because if you order "pepperoni" in Italy you'll get a pizza covered with peppers. Still delicious, but perhaps not quite what you were going for. Both pizzas were much larger than I expected especially considering they only cost around €7 each. The crust was thin and crispy which really let the toppings shine. It was everything I love about pizza, made even better because we were in Italy! 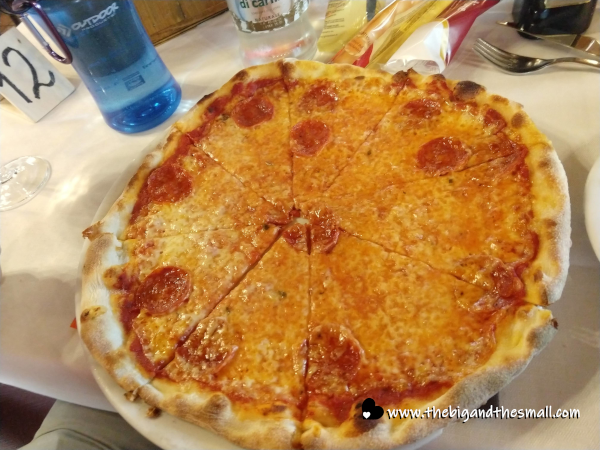 We shared our pizza's (Joel agreed that mine was better) and between the two of us we still ended up with half a pizza to take home. In another show of how popular Sef is at this place, our waiter brought each of us a free little dessert refreshment! I'm not sure exactly what this was, it tasted kind of like an extra sweet orange juice slushie? I only had one sip before declaring it too sweet and letting Joel have the rest of mine, to his delight. 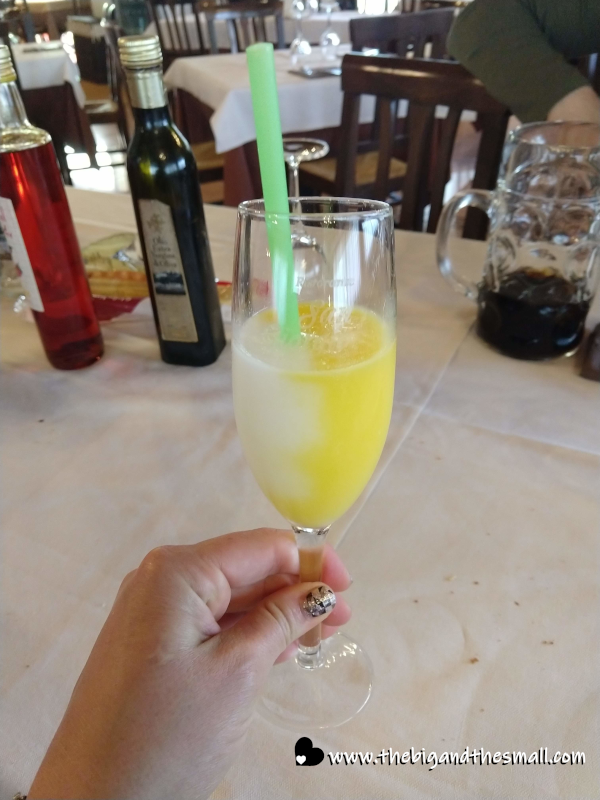 After lunch, it was off to the military base so Sef could show us around and we could get some snacks and groceries at the store on base. This was my first time going to a military base anywhere, let alone abroad, and it was kind of intense! At the gate, we had to check-in, show our passports, and get special paperwork which allowed Sef to take us onto the base. As he drove us around I made sure to ask that I could take pictures, I didn't want to do anything wrong and end up in a military prison! It was fascinating to see this little bit of America inside Italy complete with a grocery store full of American favorites and a food court complete with Taco Bell. 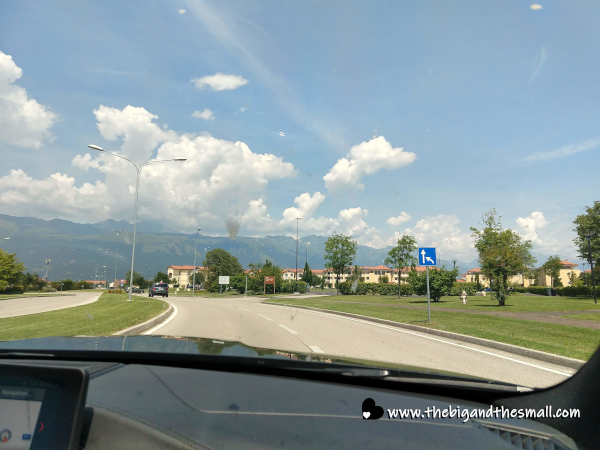 We went home for a bit so I could get a blog post done, then Sef took us around to some of his favorite natural scenes in the area. This first pool of water hides an underwater cave which has been explored off and on over the decades. There was a map nearby that shows exactly how much of the cave structure has been explored and a question mark at the end where exploration stopped. Eventually, the area was shut down for exploration as too many people lost their lives. If you look closely in the picture below you can see a statue that still rests at the bottom of the pond, though no one knows the story or origin of it. It's rather ghostly and haunting, especially when you consider the story of the caves. Also note, I did not edit this photo at all for color - the blue was really that vibrant! 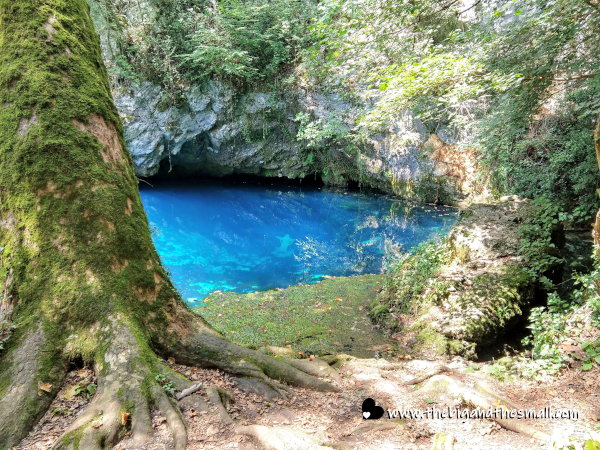 We drove a few miles to another pond, this one close to Sef's home. He would normally walk here but I was saving my walking feet for Venice the next day and didn't want to risk getting any blisters. (Bonus - driving the car meant we could go a little further and also stopped for gelato!) This side of the water had a little waterfall and the sound of the water so was so peaceful. 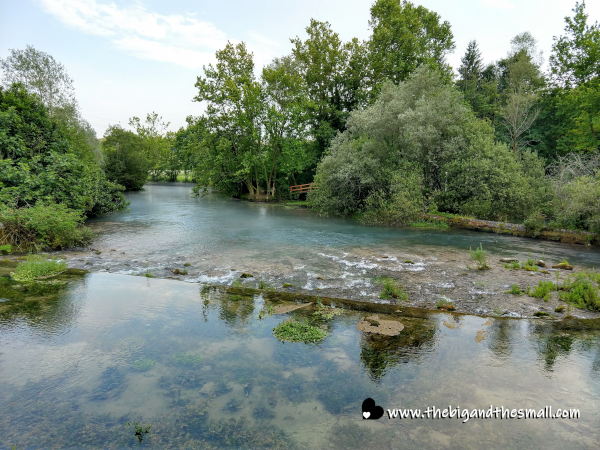 We walked all around the water and across a bridge (if you look closely at the picture above you can see it in the distance) then through the woods on a trail that stayed along the edge. At one point we looked at the water and all of a sudden it was very foggy and misty. It was rather spooky and I loved it! The water itself was incredibly clear and very cold. I reached down to dip my hands in at one point and it did a great job of cooling me off in the summer heat. The water is cold because most of it is runoff from the snow melting in the mountains. 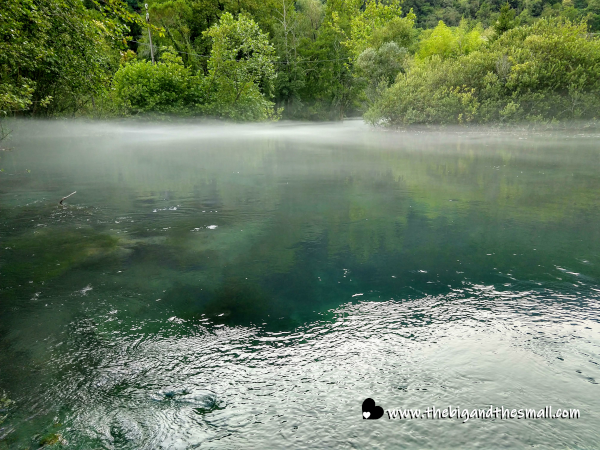 Before darkness fell we made our way back to Sef's for leftovers for dinner and we began watching Chernobyl, an HBO 5 part mini-series that covers the Chernobyl disaster from 1986. I highly recommend watching it if you can! All in all a fantastic day in Italy with a good friend, delicious pizza, yummy gelato and beautiful sights. I could get used to this.