The day we landed in Italy we were too tired to do much more than sleep, eat dinner in our hotel room, and go back to sleep. Thankfully our room was dark, the bed comfy, and we woke up refreshed and ready to take on a new country! Our plan for the day was to explore the area around the hotel while waiting for our friend Yusef to come to pick us up. He was taking his wife to the airport at some point that day, then he would come to get us and we planned to spend the rest of our time in Italy with him! 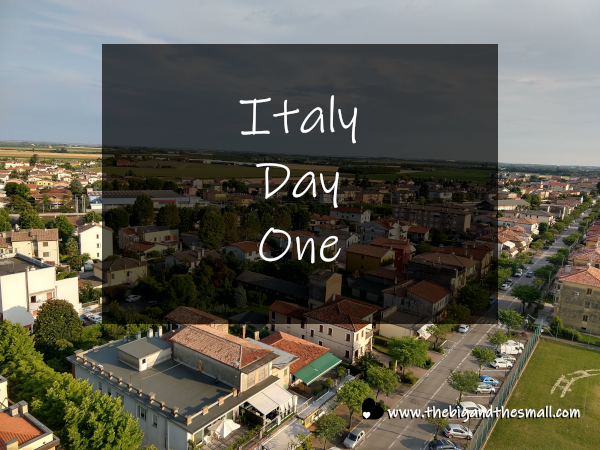 We started the day with breakfast at our hotel - the Best Western in Quarto D'Altino (just outside of Venice, near the Marco Polo airport.) When we checked in the day before we had the option to get breakfast for only €4 each. That sounded like a good deal so we went for it, and I am so glad we did! The breakfast on offer was much more than a typical hotel breakfast; not only did we have breakfast foods likes sausage, bacon, eggs, potatoes, etc, there were some Italian delights like salami and hard rolls, plenty of butter, and a whole table of desserts! I'm usually not one to eat sweets at breakfast but I couldn't resist. There was also an amazing cappuccino machine that had like 15 different options. I had two and was subsequently wound up for the rest of the day in the best way possible. 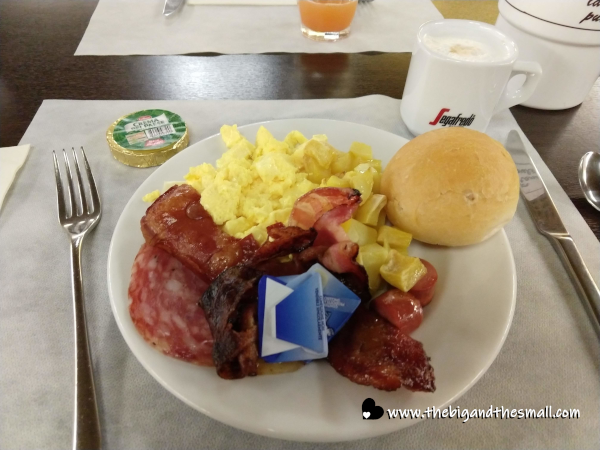 After breakfast we hung out in our room until the exact moment we had to check out at 11 AM. The front desk ladies then kindly let us stash our luggage in a storeroom so we could explore the town without lugging everything around with us. We thought it would only be for a few hours...but it turned out to be a lot longer, whoops!

We set out from the hotel and walked towards the cute little town nearby. After passing the grocery store we had gone to the day before there were plenty of shops, a sweet little park, and more gelato shops than you would think a town of this size could support. We managed to walk to the end of the town before finally succumbing and getting some gelato. There were so many flavors to choose from we didn't know how to choose, so we asked the gals working what their favorite flavor was. It took some Google Translate to get the question across but I am so glad we struggled through the language barrier because they recommended Pistachio - a flavor I never would have chosen on my own. And it turned out to be the best gelato I have ever had in my life! I plan to do a full post on all the gelato we ate in Italy but of all the ones we tried nothing topped this first flavor at this first shop. 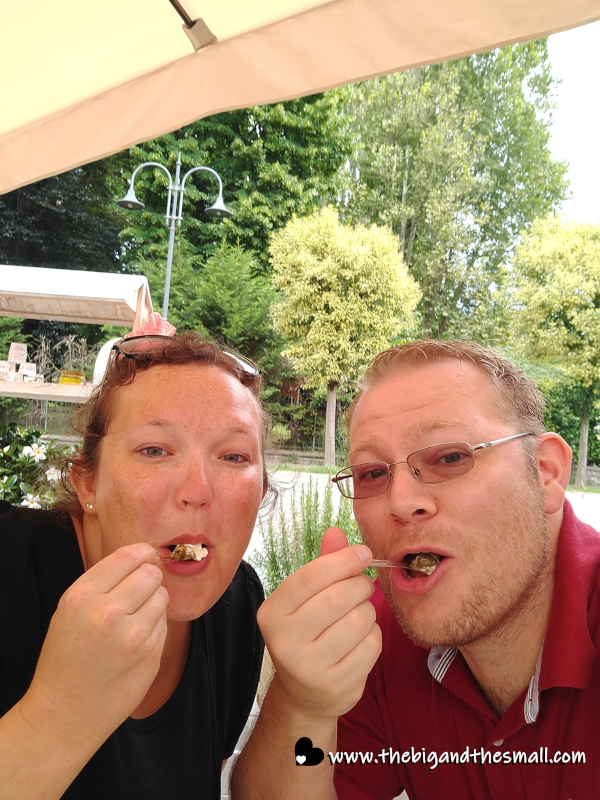 As we ate our gelato we reveled at the fact that we were in Italy, that I had just received approval for my dream job in the UK, and how far our lives have come since we met in 2012. Joel and I met online, and after emailing back and forth for weeks we finally agreed to meet up in person. For our first official meeting, we went to Chocolaterie Stam in Ames, Iowa and ate... gelato! At that time we never could have guessed that almost seven years later we'd be eating gelato in Italy after a year of traveling around the world with a year ahead of us as well!

After the gelato, we wandered further out of the town towards some cornfields that reminded us of Iowa. Google maps informed Joel there was a monument ahead which we were hoping to find. We finally did find this WWII monument in a bit of an odd, out of the way place. It was on the side of the road on a roundabout - hard to walk to yet basically impossible to see if you were driving by. It was strange, especially considering the park we had passed earlier had a huge easily accessible WWI monument. 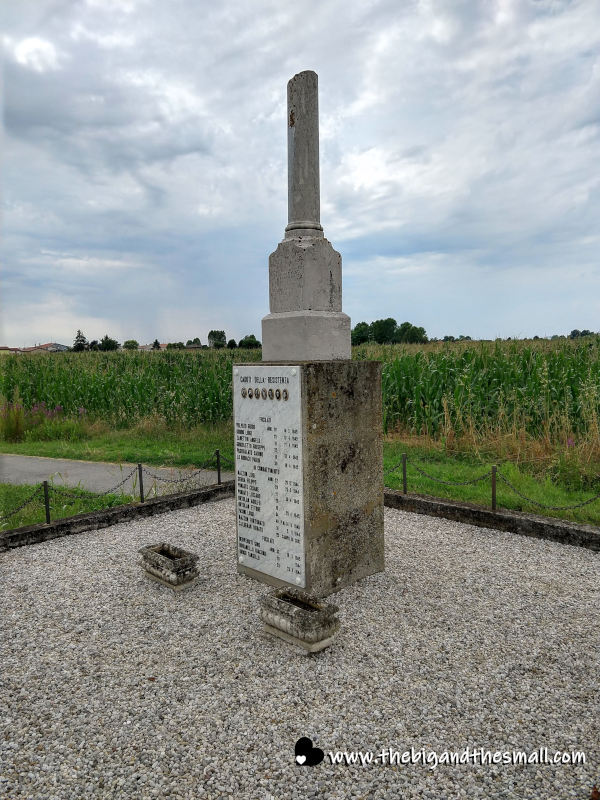 The time was nearing 1 PM and we though Sef might be picking us up soon, so we headed back to the hotel to enjoy some air conditioning and free wi-fi. Then Sef messaged that he would be later than he thought, so we went back out to wander around again. This pattern continued for most of the afternoon until Sef finally learned from his wife that her flight wasn't till much later than expected, and he shared that he wouldn't be able to pick us up till late in the evening. It was all good though, the hotel was incredibly gracious about letting us leave our stuff there until after 9 PM, we went back to the same gelato place to try another flavor (Paradiso, creamy, light, and lovely), and we ate a lovely dinner in the town park.

Sef's late pick up also meant we got to explore something we had seen earlier in the day but thought we wouldn't get to check out because it didn't open to the public until 6 PM. The local church had a bell tower next door, and on Thursday from 6-10 visitors can pay only €2 to climb to the very top! 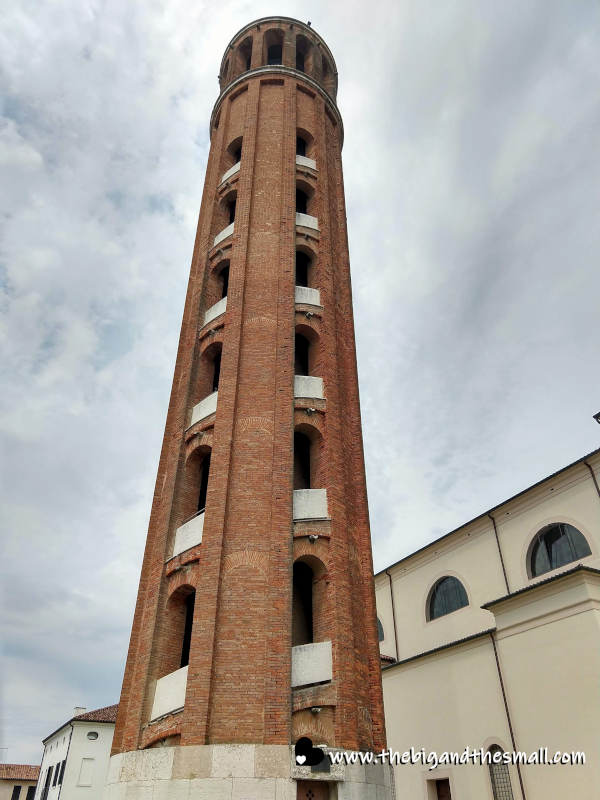 The climb to the top wasn't as strenuous as I expected, in part because instead of stairs it was just one continuous ramp to the top. I almost got a bit dizzy as it went round and round and round. Finally, we reached the top and the giant bells hung over our heads. I'm so glad we timed it so that they didn't ring while we were up there - that could lead to quite the headache I think! 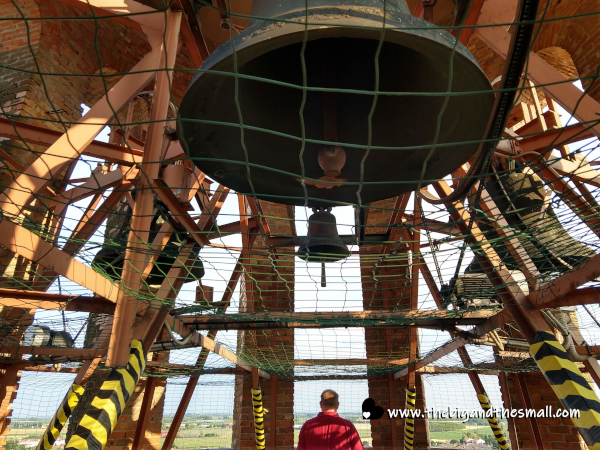 The view from the top of the tower was incredible. I know from one of the windows we could see Venice proper in the extreme distance, but it was much too far to show up well in the photographs. Ah well, the town of Quarto D'Altino was pretty quaint and adorable as well! 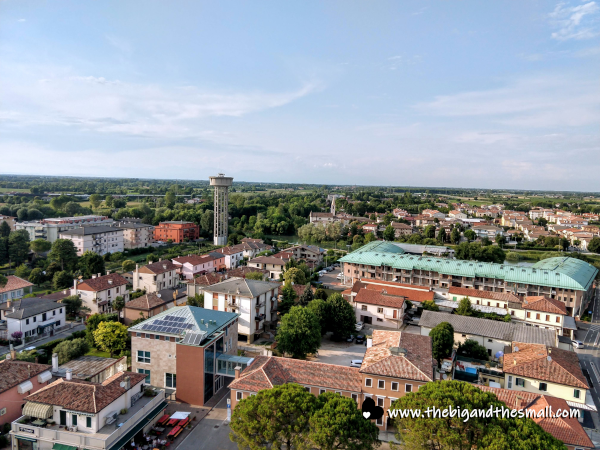 After winding our way back down to earth, we headed back to the gelato place for the third time; by this time the ladies at the store recognized Joel and started laughing when he came in. For our third scoop of the day, we went with lemon which turned out to be our least favorite. Nothing beat that Pistachio from the morning. We hung out there till they closed at 7 PM, then went back to the hotel and sat in the lobby until Sef was able to come to pick us up! After a long day and lots of walking, we were grateful for a comfortable bed in his roomy guest room to crash in, even if it did mean hauling our luggage up to the third floor.

We went to sleep excited about what the next day in Italy would bring! Hopefully, more gelato!