Our time in London went all too fast, and before we knew my interviews were done and it was time to head to Italy! And I mean, like, right away. I got back to the flat from the interviews on Monday around 2 PM. We left the flat to venture to our flight to Italy 12 hours later... yes I mean at 2 AM. And yes, navigating London public transit at two o'clock in the morning was quite the adventure! 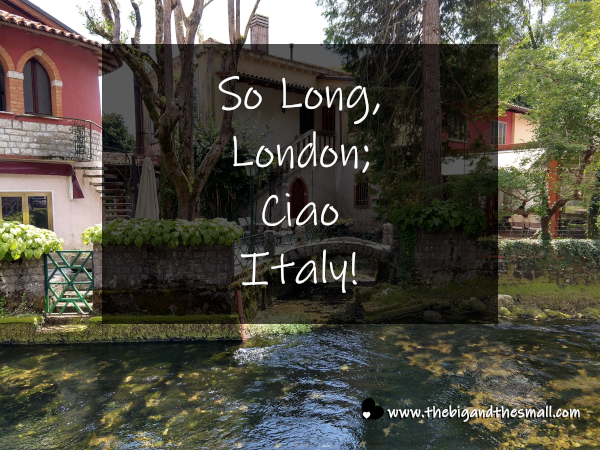 So, Steve was super awesome and did all the research for us on how we needed to get from our flat to the Southend Airport (which, as its name implies, is very south of London.) He sent us the exact directions we needed to follow so we set out with a great amount of confidence about our ability to get to the airport easily. But it turns out it was a lot of steps.

First, we had to walk a few blocks to the first bus stop. Remember that at this point we are hauling all of our luggage - one giant rolly bag, one small rolly bag, one giant backpack, a laptop case with 2 laptops, and a shoulder bag. That might not sound like much, and it is one full rolly bag less than last year, but when you are wandering around the city at 2 am it feels like A LOT of stuff. Then we had to wait for about 20 minutes for the next bus to show up. I decided we should take a middle of the night selfie, so here's that for ya. 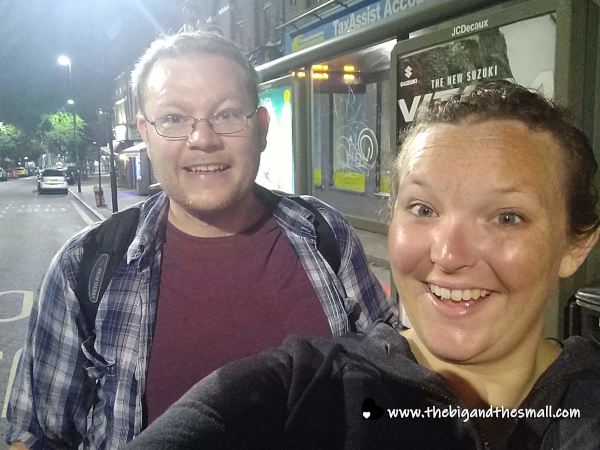 As we were waiting for the bus, something really exciting happened - we saw city foxes! Steve had told us about these wild foxes who run around the city (we had seen evidence of there, um, waste, before) but we hadn't quite believed him about their existence. But then we heard some weird noises and I looked across the street and saw several of them running around! They were super fast so it was darn near impossible to get a picture of them, but you can see the brown, furry blur in the one below - that's a city fox! 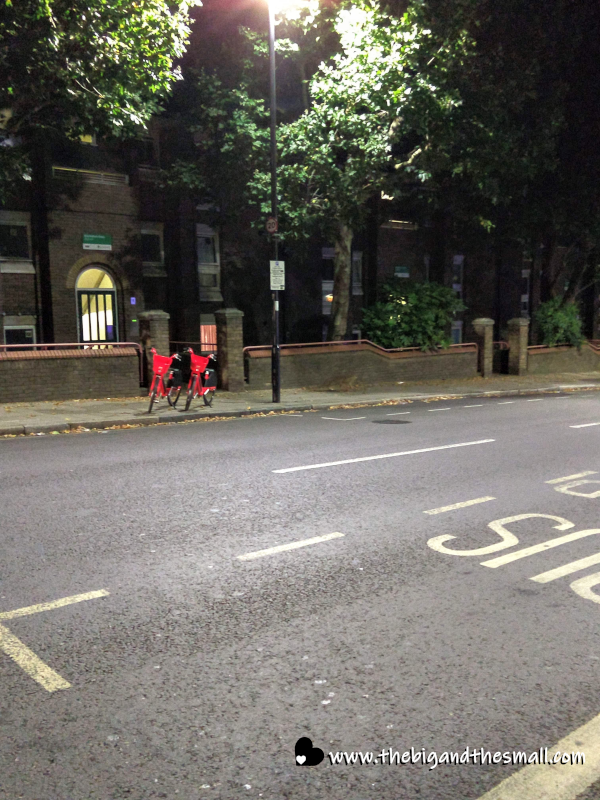 Our first bus finally came and we rode for about 25 minutes to our next stop. There we got off, crossed the street, waited about 5 minutes for the next bus, then rode that one for another 25 minutes to a main station in town. Here, we were supposed to get on a train at 4:45 that would take us straight to the airport. Simple, right? Haha, don't you know how travel goes for us yet? Something always goes wrong! And here's where it started. As we got off the bus, a guy sitting nearby asked what we were there for (I guess he could tell we were foreigners.) When we said we wanted to catch a train to the airport, he told us the train station doesn't open till 5 AM. It was 3:30 AM at this point. We thanked him for the information then walked over to some benches outside the station to sit and wait.

And y'all, if we had just stayed there and trusted Steve's directions all would have been well. But we had to make it harder for ourselves. Joel went to ask a guy at the information booth what time the train station opened because the reported 5 AM from the random guy contradicted our 4:45 AM train departure time. The information guy said that the train station did not open till 5, but we could walk a short way to one that should be open already. So we tried that. We walked across a plaza, took a lift up, walked across a bridge and found a shopping mall of sorts.

There, we asked some workers where this station might be, and they directed us down another lift and to "turn left." Following those directions, we found a coach station that had coaches coming to take people to Stanstead Airport (but remember, we were going to Southend.) Joel asked another random guy who was carrying a suitcase, and he told us to keep walking "that direction" and we'd get to the train station that should be open. We walked a bit, then decided that leaving what seemed like the central station didn't seem like a good idea, so we turned back and went to rest in the shopping mall area.

At this point, we decided that I would sit with all of our luggage while Joel ran around unencumbered trying to get better directions/information from someone. I think it was around 4 AM at this point. Every single person he talked to (maybe half a dozen?) confirmed that the train station would not open until 5 AM, which meant we had no way of getting on the 4:45 train and would have to wait for the 5:45. Joel came back to sit with me, and we struggled to stay awake in the pre-dawn darkness. Around 4:30 I suggested we go downstairs and wait by the train station just in case it opened early, but we decided to rest longer instead. We also strongly debated ordering an Uber and calling it a day, but it was way too expensive.

Finally at about 5 till 5 AM we trekked back to the original train station to find it open and up and running. We asked a guy at the gate what time it opened and he said 4:30 AM. Remember, every single person we had talked to up until that point had said 5 AM, including the guy working in the information booth about 100 feet away. WHAT THE HECK!? Why did nobody have the correct information! We could have saved ourselves a lot of trouble and just waited in one spot but oh well.

We managed to return Joel's city pass card (called an Oyster card) but couldn't get a refund on mine because it was over £10 (note to self: do that online today) which was frustrating. Then we purchased train tickets and made it to our platform to wait for the 5:45 train. This still got us to the airport in plenty of time for our 7:30 flight, in part because it was a tiny airport so check-in and security took almost no time at all. By the time we finally boarded the plane I had been up for almost 48 hours straight, with just an hour or two of sleep here or there (remember I barely slept at my interview retreat because I was so nervous!) I crashed hard during the whole flight and before I knew it, we were landing in Italy!

For our first night in Italy, we booked a room at a hotel because our friend Yusef would be picking us up the next day and letting us stay with him. We splurged a bit on a Best Western solely because it had a shuttle from the airport and we did not want to deal with any more public transportation with all of our luggage! We had a bit of a hiccup when we learned that while the shuttle was free, we were supposed to book ahead online to get picked up. Joel found a worker who was willing to call the hotel for us, and after about a 30 minutes wait we were finally picked up and on our way to the hotel! 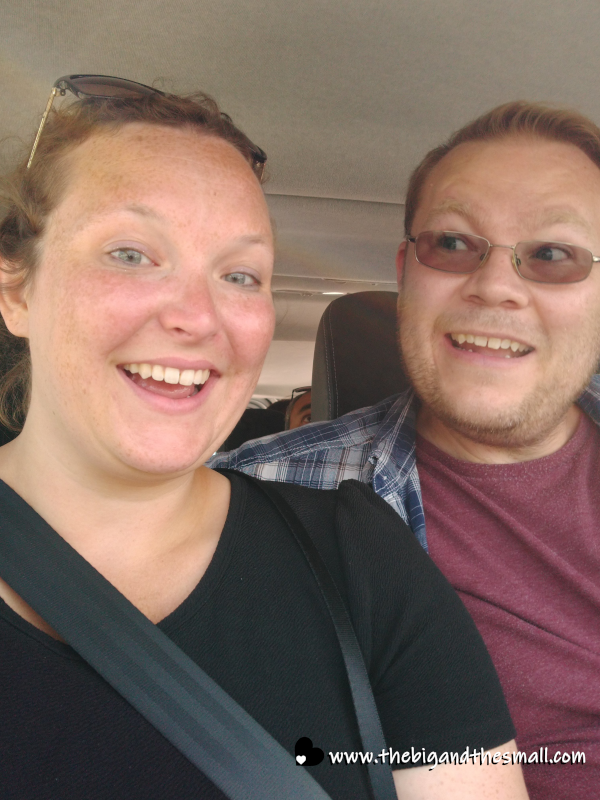 Check-in was easy and we finally made it to our room around 1 PM and promptly collapsed until about 6 PM. We were hungry when we woke up, so we walked to the grocery store one block away and purchased some salami, a baguette, and olive oil. That paired with the cheddar cheese and some spices we had with us made for an amazing dinner. I called my mom for a chat and then it was back to bed to keep catching up on sleep!

We were too tired to really enjoy this first day in Italy, but don't worry, we made up for it later!