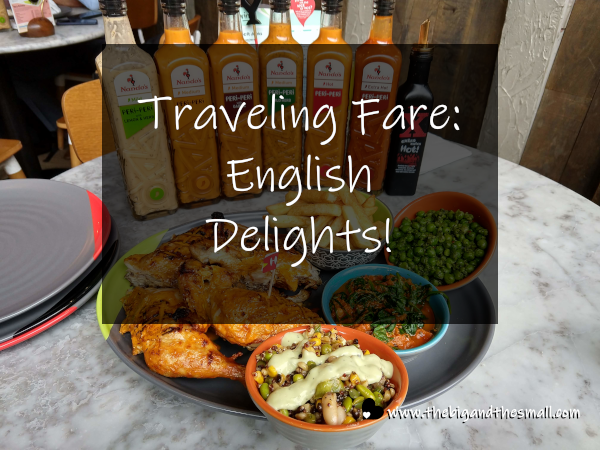 Last fall we went out with Steve one night in Swansea and we had a heck of a time finding a place to eat. This is when he first told us about Nando's, a fast service restaurant known for "peri-peri chicken." Peri-peri is a type of pepper also known as the African Bird's Eye Chili and it's what the restaurant uses for their famous chicken and a whole host of sauces you can add to the chicken. We never did eat at Nando's in Swansea, or on our road trip through the UK, or any other time that we hung out with Steve. So when I was looking on the map to see where my first job interview was, and I saw that a Nando's was right around the corner, I declared that we were eating there for lunch when I finished my interview!

I was too nervous to eat anything more than half a banana before my interview, so by the time it was done at noon and I got the accompanying rush of relief, I was starving! Thankfully it was just a 2 minute walk from the Methodist Building to Nando's, where Joel and Steve were waiting for me. We ordered a whole chicken to share, which came with four side dishes. While we waited for our food, Steve and I collected one of every sauce they had available and lined them up on our table, all ready to test! 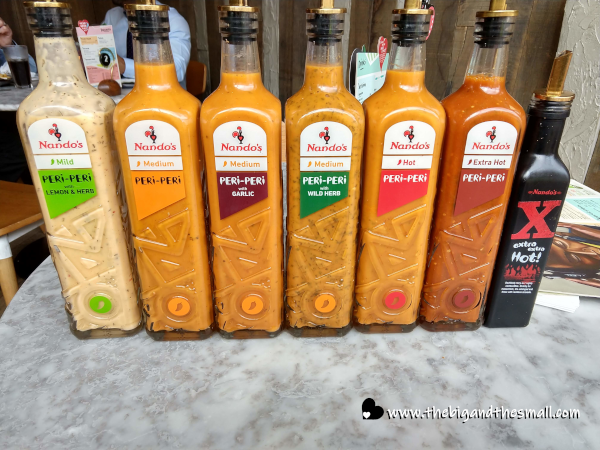 It's the style of restaurant where you order food at the counter, then they bring it to you at your table, and I was delighted by how fast it was. We ordered half of our chicken "regular" and half of it "hot," though I tasted both and I couldn't really tell the difference. For me, the star of the show was the sauces so in the future I think I'd just order the chicken regular and spice it up with the sauce. They were all delicious but my two favorites were the Lemon & Herb and the Peri-Peri with Garlic. When I mixed the two together and dipped my perfectly cooked chicken in the mixed sauce it was particularly delightful. 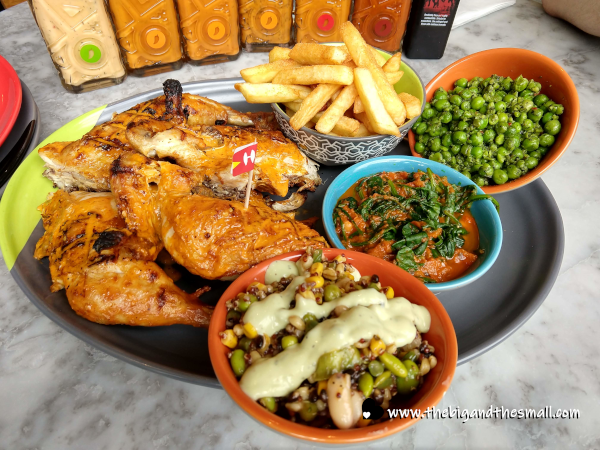 I was impressed with the options for side dishes because there were so many healthy options! We ended up choosing the Peri-Salted Chips (per Steve's recommendation), something called Greens 'N Grains (a mix of grains, beans, peas, and corn with an avocado and buttermilk dressing), Saucy Spinach (spinach cooked in a tomato and coconut sauce with chickpeas), and Macho Peas (whole peas drenched in pea mash, parsley, mint, and chili). They were all delicious, though my favorite by far was the spinach. I can definitely see myself eating at Nando's when we live in the UK, and I am definitely excited about the fact that you can buy their sauces to take home! I would love to cook chicken on my own and just add these amazing sauces for an extra kick.

A few days later Steve introduced us to another English food he had been talking about for months but never taken us to eat - a doner kebab! Restaurants that serve these, known as "kebabis," are on practically every corner in London. On Friday night we picked one near a park and then went to eat our doner kebabs on a park bench! If I had to describe this meal I would call it a Middle Eastern burrito. Wrapped in the tortilla was lamb, chicken, fresh and marinated vegetables, then it was all smothered in a garlic sauce and a chili sauce. It was delicious. I can't wait to eat these more often when we live in the UK! 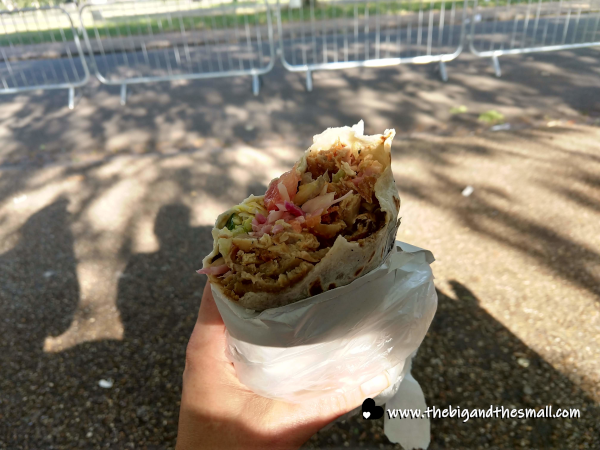 When we were leaving the Imperial War Museum on Saturday we encountered an ice cream truck, so Steve bought us something called a "99." So named because it used to cost only 99 pence, the price has risen since then and in central London this treat cost a cool £2.50. Joel and I were going to splilt one but I had one taste and demanded that he get his own as I wanted a whole one to myself. It was simple - a vanilla ice cream with a choclate "flake" (like a milk chocolate stick) in a sugar cone. Something about the ice cream was extra special though, it was incredibly creamy and had a very rich vanilla flavor - I loved it! And one more time with the common refrain - I will eat this again when we live in the UK! 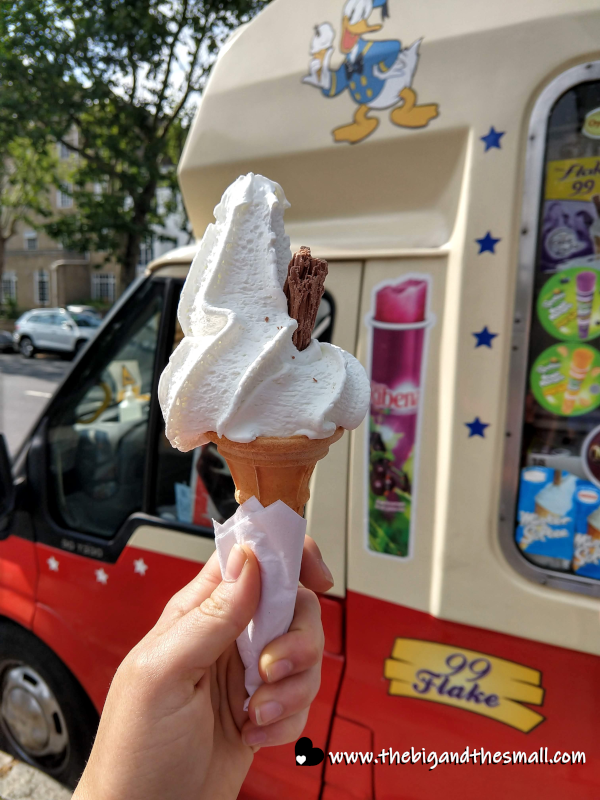 The final English delight I'm going to talk about is something we've had many times before, but I insisted on getting one this time because I love it so much - the classic English Breakfast! After church on Sunday Steve and I found a cafe near the flat that had a variety of English Breakfasts to choose from. I went for the classic which included 2 pieces of bacon, 1 sausage, 1 egg, 1 piece of fry bread, chips, mushrooms, and beans. Oh, and a cup of tea, of course. In other places in the UK we have found a Full English for as cheap as £3.50, but even here in London it only cost £6 which is still a great price for everything you get! 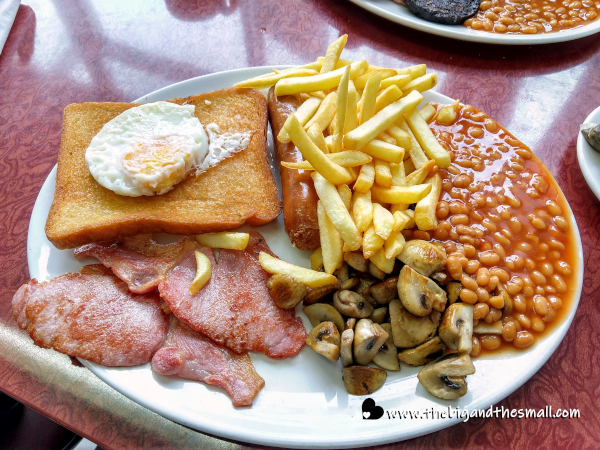 Steve went for a bit of a twist on the Full English, getting one that had an extra egg, an extra piece off sausage, traded the chips for "bubble & squeak" (kind of a fried mashed potatoes with some veggies in it), and traded the mushrooms for two pieces of black pudding. We both struggled to finish our plates as it was so. much. food! I barely ate anything the rest of the day. 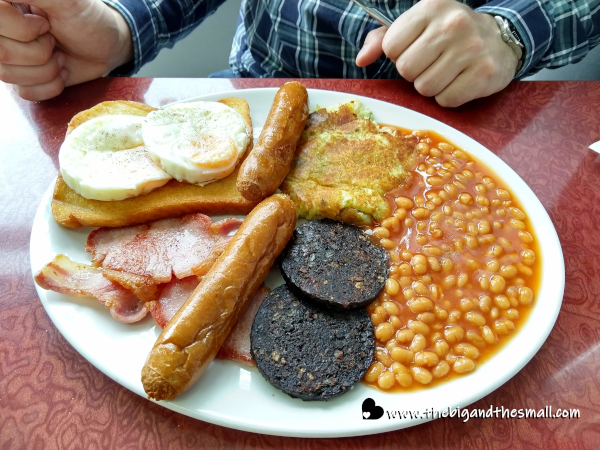 I've often heard that English food is "bland" or "boring" and to those people I say "you are eating the wrong things!" The food we've found in England is some of my favorite in all of Europe, including what we find in restaurants like in this post, and what we can get for great prices at the grocery store (like amazing vintage cheddar cheese for a steal!) I am looking forward to living in the UK for a lot of reasons (the people, the culture, the coast, the ease of travel to mainland Europe) but the food is definitely near the top of the list!

Which of these goodies would you most like to try? If you've traveled to England, what was your favorite food you ate there? Dish below!