Will and Nate Celebrate!

Back in April when Joel and I were discussing all of the reasons to come home for the summer, one of the items at the top of my list was the wedding of my cousin Nate! I love weddings and knew that this one would serve as a family reunion for my dad's side of the family, so when it worked out in our timeline to attend I was so excited! 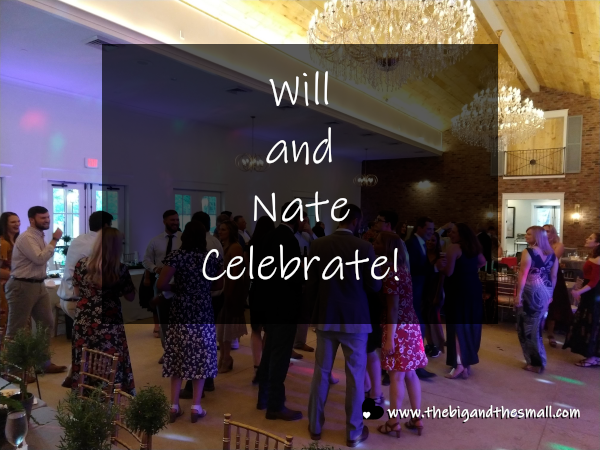 [For the record, three of my cousins on my mom's side of the family - a set of brothers - got married last year shortly after we left. They all married in quick succession of each other - one in September, one in November, and one in December. I hated missing those weddings, but there is no way we could have attended all of them!]

This one that we were able to attend was that of my cousin Nate to his partner of five years (and best friend of many years), Will. The wedding took place in Louisville, Kentucky, which meant a nice long road trip for us coming all the way from Des Moines, IA. We arrived around dinner time on Friday evening, and after checking in at the hip hotel everyone was staying at, went out for some good Kentucky barbecue! On Saturday mom, Joel and I ate at a fabulous local restaurant with some real southern treats like cornbread and fried green tomatoes.

After a nice nap on Saturday afternoon, it was time to head to the wedding venue! They got married in a barn that was newly renovated to be an event venue - like so newly that there were still some unfinished bits that we could see. But overall the place was so gorgeous that no one cared about the small details - I mean, just look at this gorgeous outside area! 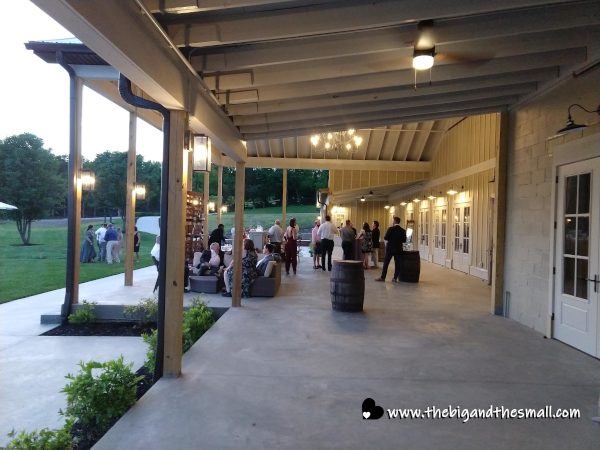 Before the ceremony, we managed to gather all (I think?) of dad's side of the family that was in attendance so we could take a family picture together. I'm pretty sure they only people we are missing are Nate, his parents, and brother, but they had a pretty good excuse for not being there since it was taken approximately 7 minutes before the start of the ceremony. 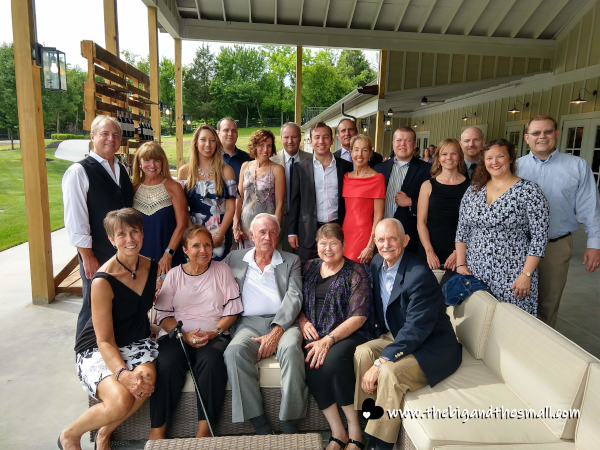 The ceremony was held inside, in front of this gorgeous flower backdrop. I didn't take any pictures during the ceremony so I could be fully present, so you'll have to just enjoy this flower backdrop and use your imagination. The ceremony itself was beautiful, heartwarming, and at times, hilarious. The officiant was a long time friend of both grooms, and though it was her first time doing a wedding she did a great job! There was one slip at the end where she started to introduce the new Mr. and Mrs....but she corrected herself quickly and it really fit in with the humor that had been sprinkled throughout the ceremony. Nate and Will wrote their own vows which were personal, heartfelt, and perfect for their personalities and each other. 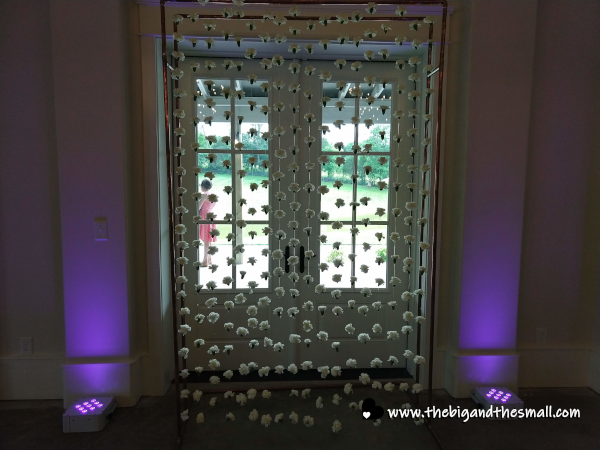 There was one piece of the ceremony that was new to me - they put a twist on the "unity symbol" that has become a trend in weddings recently. Some couples will do a unity candle, I've seen unity sand pouring, and even unity tree planting. Nate and Will, however, did a unity bourbon pour! They had a cask that was stamped with their names and wedding date, then two full bottles of two different types of bourbon - one from the county where Nate grew up, and one from the country where Will grew up. At the appointed time, they poured both bottles into the cask, where the bourbons will mix, blend, and spend years aging. The plan is to drink some of the bourbon each year on their anniversary. How cool is that? 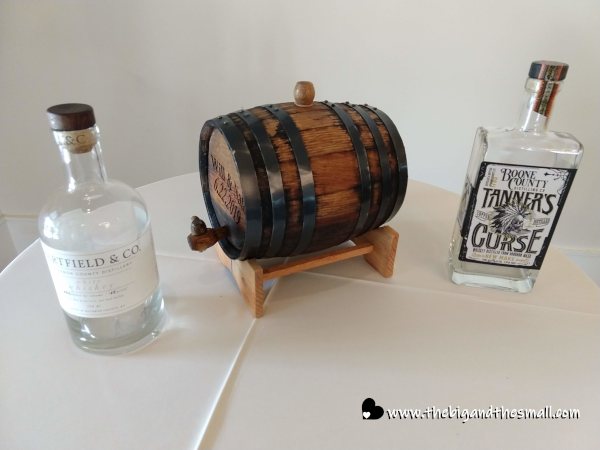 Speaking of bourbon, there is an old southern tradition which is supposed to help you get the weather you want on your wedding day. On a day that has the weather you want, you should go to the site of your wedding, and bury a bottle of bourbon. On your wedding day, dig up the bottle, and you should get the weather you want! Nate and Will did this...and did indeed get great weather after a rainy start...but the bottle was never found! They looked for a long time, then tasked Nate's younger brother and his friends with looking with a promise of getting to drink some if they found it. A huge area was dug up on the grounds but the bottle was never found. I'm guessing someone found it early and thought it was their lucky day! Regardless, it makes for a great story and a fun memory.

The reception was held right next door from the ceremony, where a large room was filled with tables set up with gorgeous flower arrangements and candles. The food was absolutely delicious - garlic mashed potatoes, green beans, some to die for tender brisket, and chicken stuffed with cheese, spinach and tomatoes (yes please!) For dessert they skipped the traditional cake and served five different kinds of tarts - lemon, chocolate, blueberry cheesecake, raspberry and pecan. I inhaled all the food before I took any pictures but trust me, it was yummy. 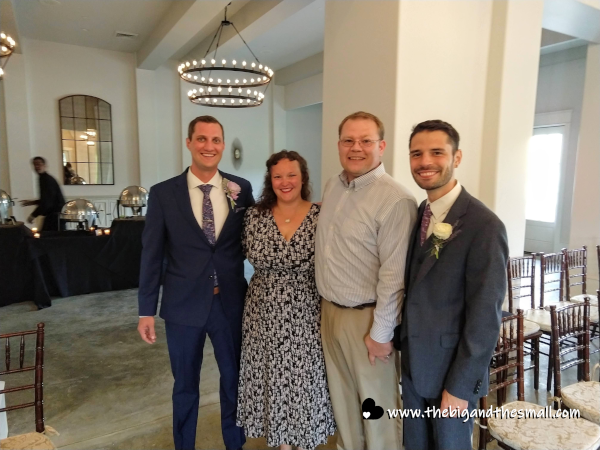 The DJ did a great job of facilitating the reception, and in particular, I loved how he did the anniversary dance. I have always seen where they start with the newlywed couple, then gradually pull up couples who have been married, five, ten, fifteen, etc. years until most people are on the dance floor. This time, however, they reversed that! We started with all married couples on the floor, then sat down by year until the only ones left standing were the newlyweds and the longest married couple. My Aunt Elsie & Uncle Tom (Nate's Great Aunt & Great Uncle, but more like grandparents) have been married over 60 years so when they were the last ones standing, the DJ had them give advice to Nate and Will. Elsie said to love each other every day as much as you do right now, and you'll be fine! It was such a sweet moment. 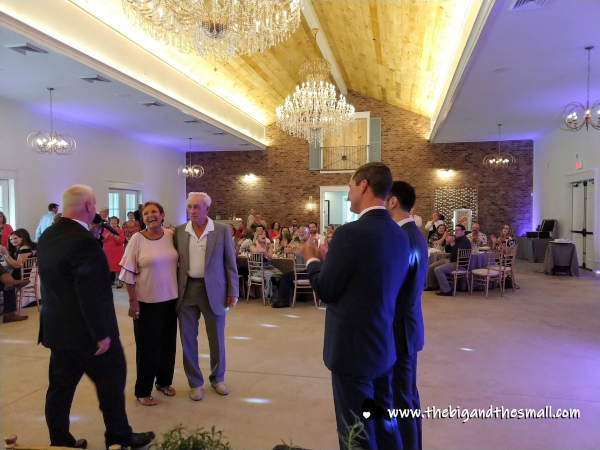 The night was filled with good food, dancing, family, and friends, and it was everything a wedding should be, and more. I am so glad we were able to attend and see family that we might not see for a long time to come! 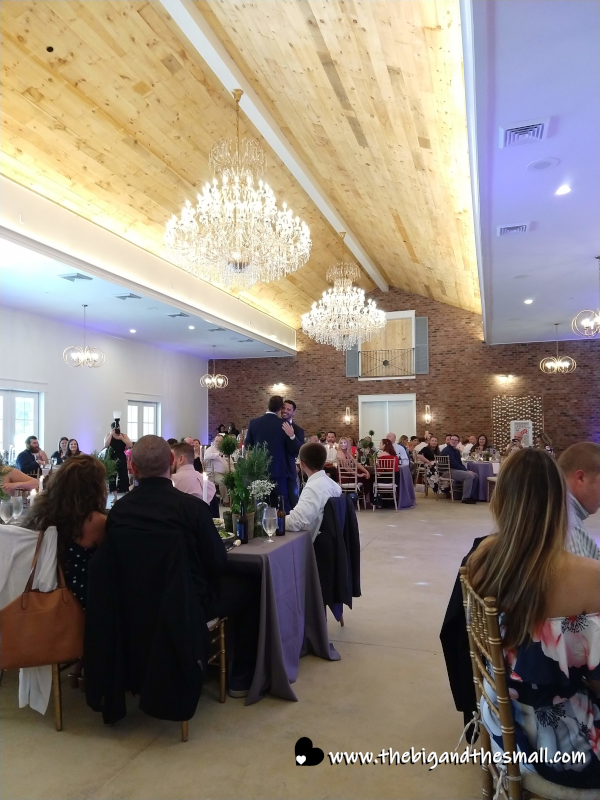 Will and Nate, I am so excited for you two, and I wish you a lifetime of happiness together. I hope every day is as filled with love and laughter as your wedding day was. I love you both!