Our time back in Iowa is passing quickly, and we are doing so many fun things every day it's hard to keep up with it all in real life, let alone on the blog! So for a while, my posts will be a bit out of date as I fill you in on all the fun things to do around these here parts. Today's post takes us back to last Monday of last week, which was Memorial Day. While it is a solemn day of remembrance, it is also a time most families take to have some fun together, and we were no exception! 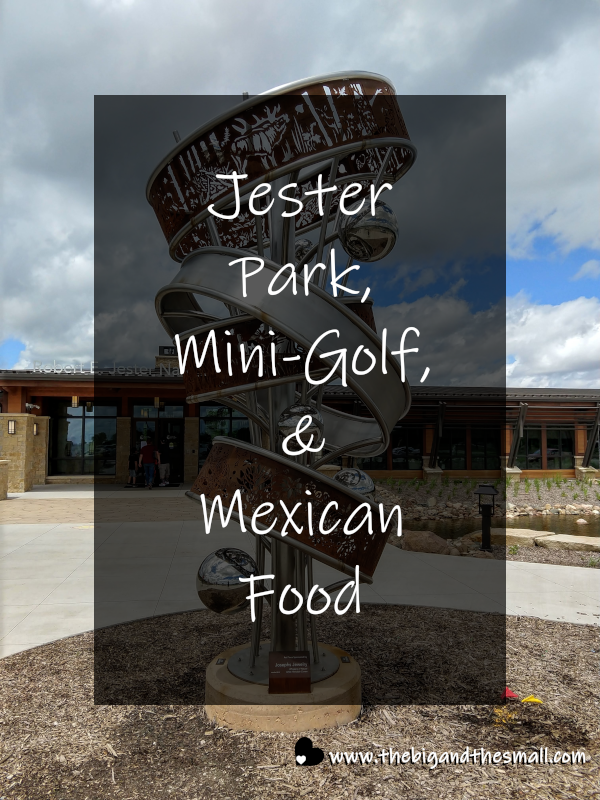 We started the day out at Jester Park, specifically at the Robert E. Jester Nature Center. This building was built just in the last year, in fact, when we walked in it still had that "new building smell" - you know what I'm talking about right? It's fresh and clean with just a hint of paint and sawdust. The building was quite impressive, boasting great views of what will be wetlands area when it grows in as expected (right now it's just kind of dirt/mud so I didn't take a picture of that.) In the basement are lots of interactive exhibits to teach children about natural habitats and wildlife in the area. 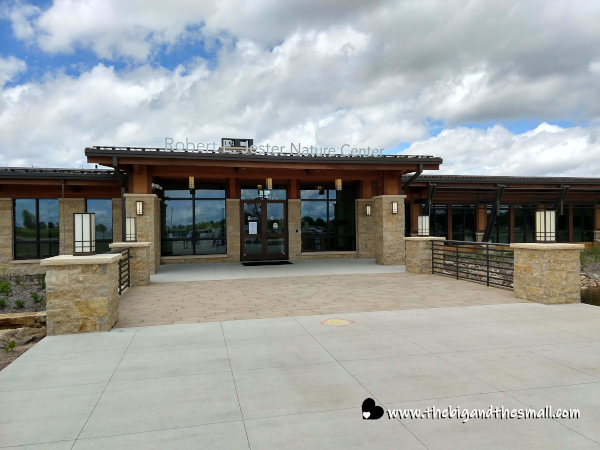 If you follow the trail that starts at the back of the nature center you get to take a lovely walk through some nature! (Shocking, right?) From the start of the trail, through the woods, around the lake and back to where you started is a little less than a mile, so it makes for an easy walk. As the sun came out it was nice that a majority of the walk was in the shade as well. 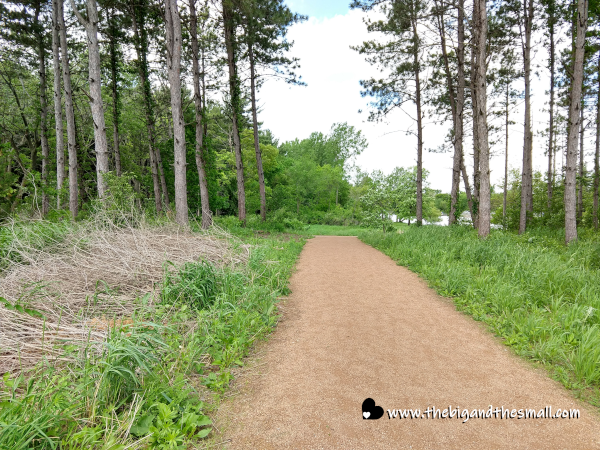 In front of the nature center was a neat statue, depicting various plants and animals found in the area. What I was most intrigued by was a neat little stand that was built to help people take selfies! The sign encouraged you to place your phone on the ledge then run back to the sign so you could take a hands-free selfie. What a neat idea! 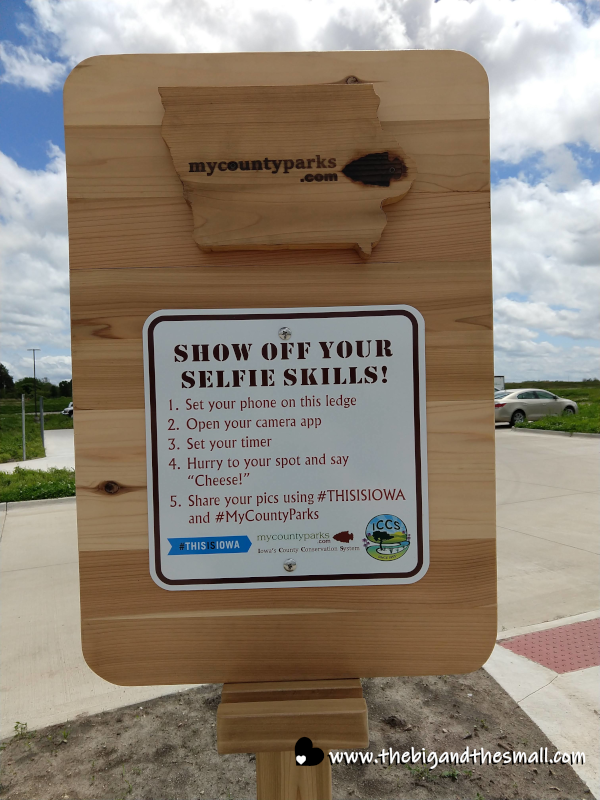 Here is the result of our selfie with Joel's camera. I will say that I think the stand is a bit too far away from the statue - as you can see from our picture the people end up so far away it's almost hard to tell who they are. But still, a neat concept that would be fun to have replicated at other touristy spots. (Although, I suppose it needs to be in a low crime/high trust area as you are stepping a bit away from your phone and someone could potentially walk off with it. Not in Iowa though...) 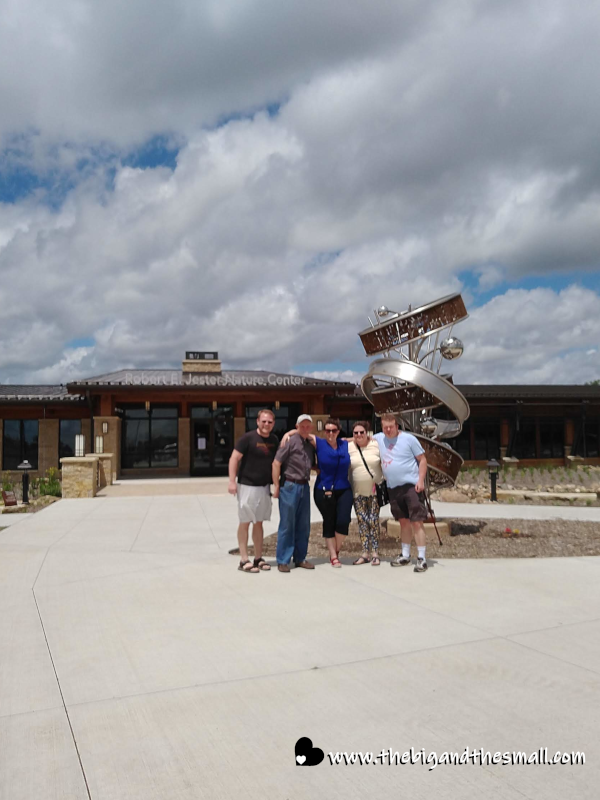 After our time at the nature center, we headed off to mini-golf, which is also a part of Jester Park as a whole. You know Joel and I love a good game of mini-golf, and a lot of that for me stems back to playing with my family every summer while growing up. So it was fun to be back out on a course with my whole family! The price was a bit steep at $10 a person, though if you have the stamina for two games in one day a second round will only set you back $3. 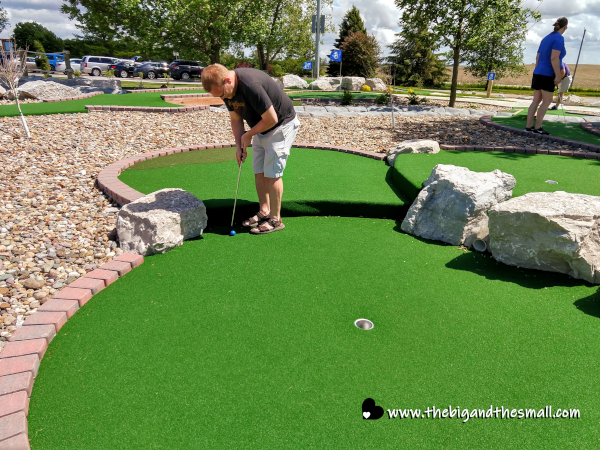 At first, I was a bit underwhelmed by the course - I mean, there weren't any dinosaurs! It was so plain! But some of the courses were tricky and pretty fun. My favorite was this one where you had to launch the ball off the ramp and over the water to the rest of the green. Except they didn't have the water up and running yet so it was more like launching it over a dry river bed. Still fun. 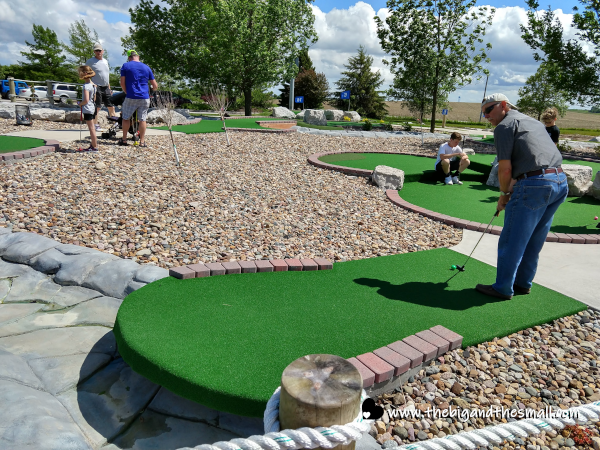 Mini-golf makes me hungry so after Joel kicked all of our butts we headed out towards Saylorville Lake, hoping to eat at a restaurant on the water called Latitude 41. We drove across the mile-long bridge to get there which afforded us great views of the lake. I was surprised at how few people were out boating on a holiday, but it was rather windy so not the best of conditions. We arrived to find the restaurant was closed so it was back to the drawing board to figure out dinner. 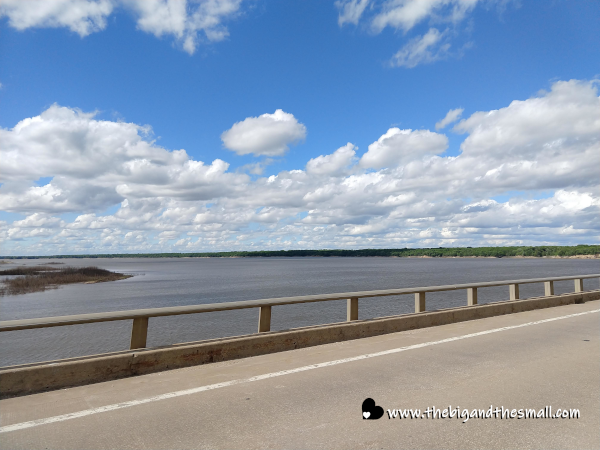 One of the foods I missed the most while abroad was Mexican food, so that was my choice for the night! I let my parents pick the exact restaurant since I'm not in the know about the best places around here. We ended up at El Barco, a local place with great food and even better prices. We started off with homemade guacamole and some of the best cheese dip with chorizo I've ever had. My family doesn't quite get the "must take a picture of all my food" aspect of being a blogger yet so they were digging in already by the time I was able to snap a pic. 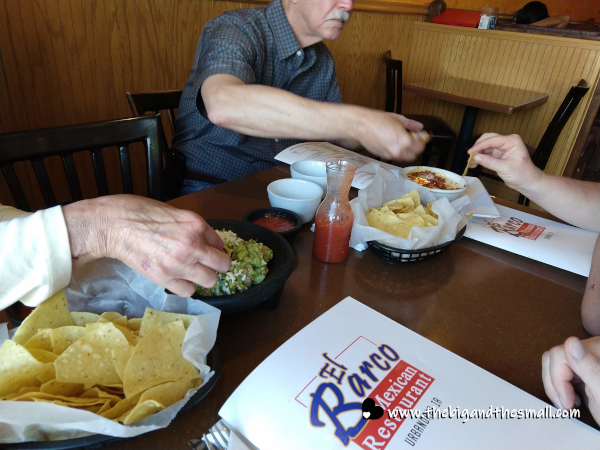 Joel and I shared a meal of chori-pollo which was chicken and chorizo smothered in more of the aforementioned cheese dip and served with rice, lettuce, more guacamole, and tortillas. I'm glad we split a meal because the portions were huge (I can tell we are back in the States!) Joel also finished off some of my mom's meal (a shrimp dish) and my dad's. 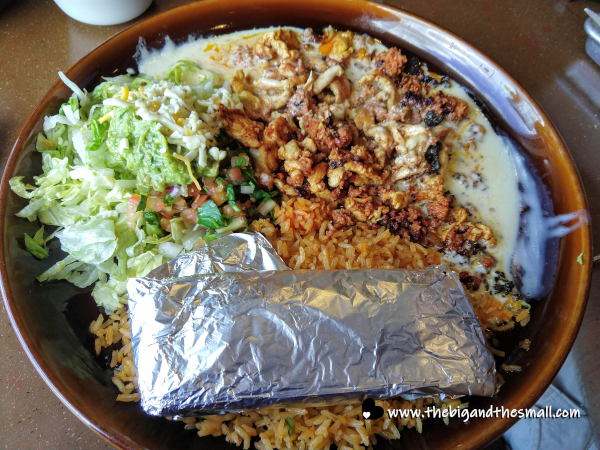 Fully stuffed with Mexican food and tired from a day in the sun we headed home for a relaxing evening to end the day. I definitely want to get more Mexican food in my face while we are back - it's all just as good as I remember!