From riding in the countryside in France to now riding old familiar trails back in Iowa, 2019 has been the year of getting back on the bicycle for me. Ironically, I ride more now than I did back when I was living my normal life and actually owned my own bike. I don't own one anymore, but homeowners/friends/family seem to always have one I can use! 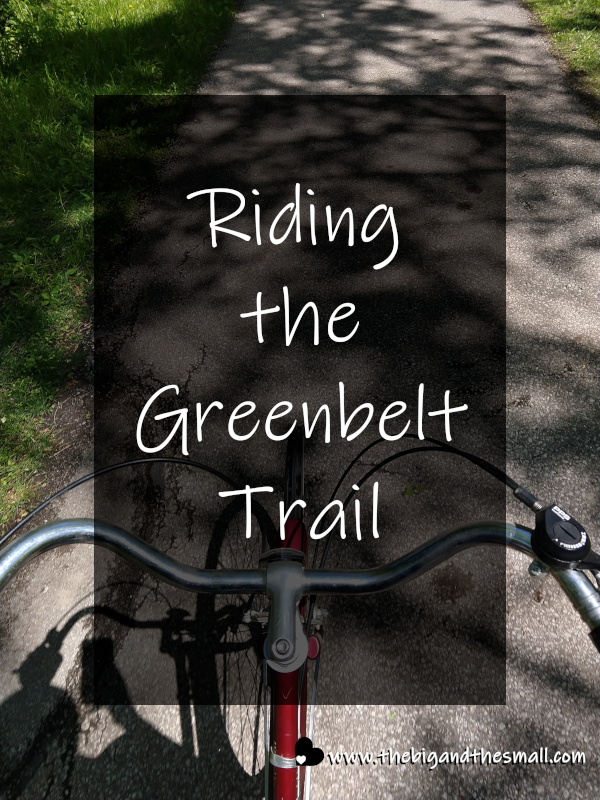 Last week we had one gorgeous day of weather (surrounded by rain on all sides) so my brother and I took advantage of it and headed out on the Greenbelt Trail. This trail covers a large portion of Iowa and we are extremely blessed that a portion of it starts right in my parent's neighborhood. We spent a lot of time on this trail growing up, so it was fun to ride as it both brought back memories, and showed me how much it has changed! We set out on my parents bikes, which are both about as old as I am, but are still in excellent shape. 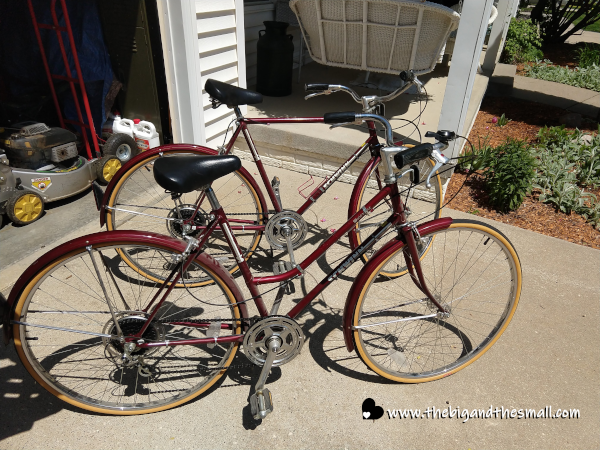 At the start of our trip I made Matthew (my brother) pose for a picture with me. I swear he was more excited than he looks, although I did wake him up from a nap for this adventure. 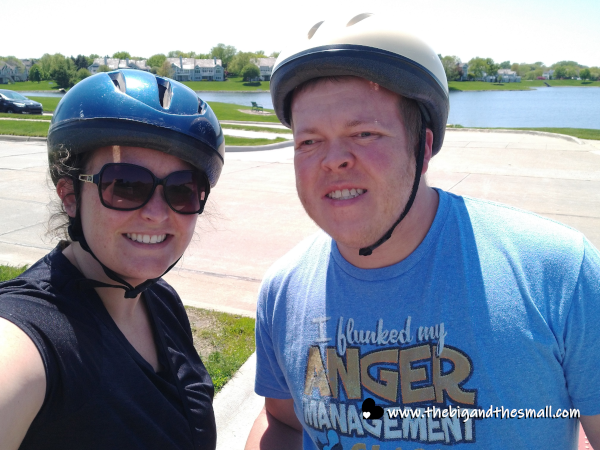 To get to the trail we have to ride about half a mile through the neighborhood to the lake at the center. It was a rough winter here in Iowa which really affects the roads, so I had to get good at swerving around some fairly massive potholes. When we arrived at the start of the trail I was already surprised by some fun changes - not only was there a sign I hadn't seen before, there was art! Art has actually been placed at a lot of places along the trail now, but this first piece was my favorite. 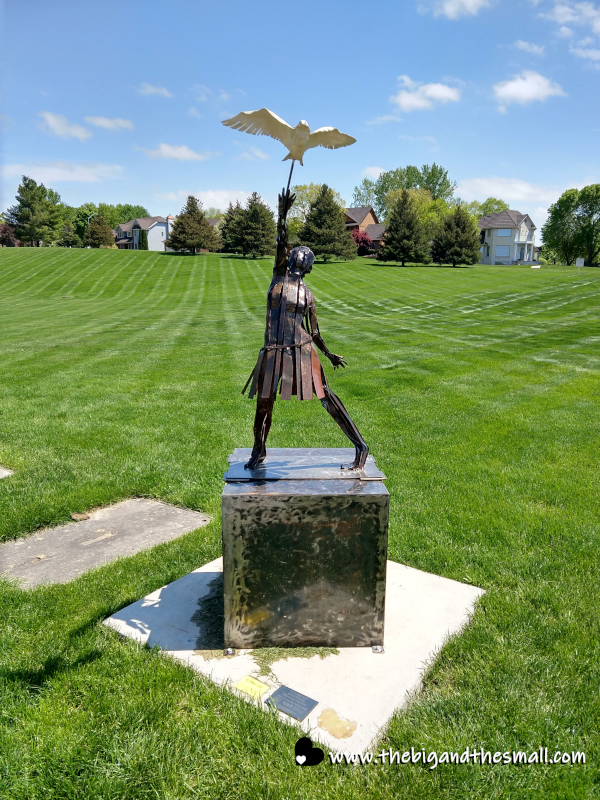 The sign informed us that our goal for the ride - the Clive Aquatic Center - was 2.1 miles away. I worked as a lifeguard at the aquatic center for four summers, and would often ride my bike to work, but I never actually knew how far away it was! I remember it being an easy ride, and even though I had a car I liked biking because it saved me money on gas. I was hoping that these 15 years later it would still feel like an easy ride. 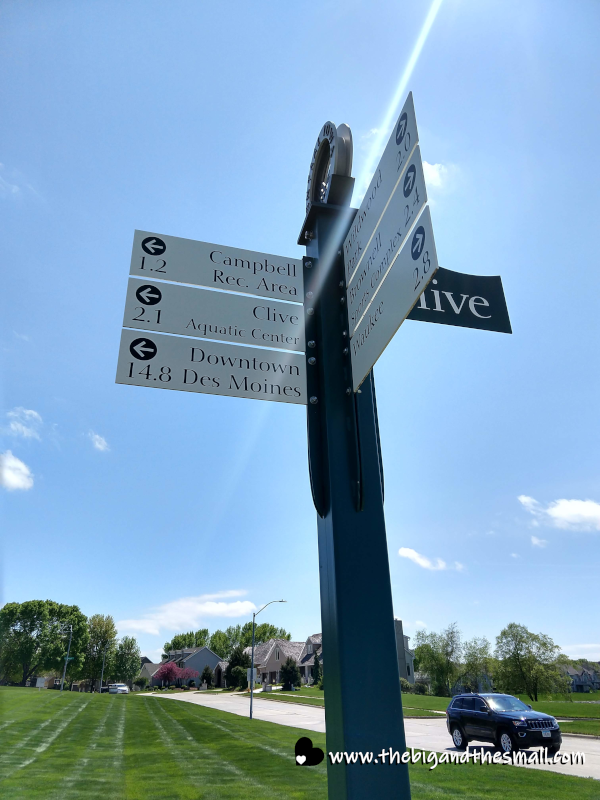 Turns out it was still an easy ride! I'm not sure I could have said that at this time last year, but I can definitely feel that I have been getting in better shape since we left for our travels. The weather was absolutely perfect - warm enough to be comfortable but not enough to be hot. The trail is mostly shaded so the sun is never beating down on you which I very much appreciate.

When I used to ride my bike to my job as a lifeguard the trail didn't quite go all the way there. In order to get to the aquatic center I had to get off the trail and ride the last quarter mile or so on the main road or the sidewalk. That has since changed! A bridge has been built from the trail, over a small creek, directly to the parking lot of the aquatic center. I actually kind of discovered this by accident (I forgot to take the old turn off at the library) but it was such a pleasant discovery! 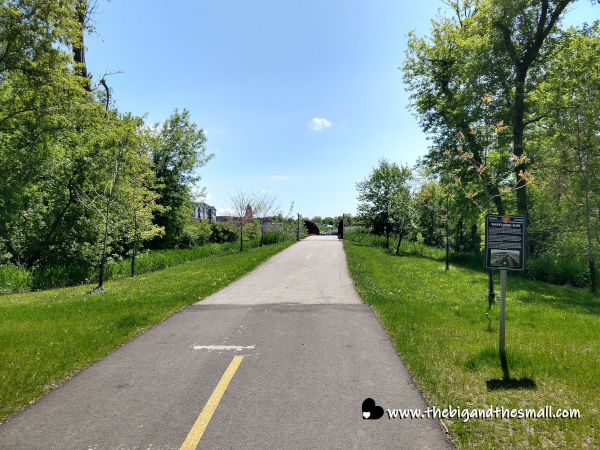 Besides all of the art along the trail, there were also several little free libraries! These are a really neat community building idea that have sprung up all over Iowa (and perhaps elsewhere, though I don't think I've seen them outside of Iowa). The idea of the little free library is that people can leave a book to read, and take a book to read. They are usually placed near a bench so you could sit and read right away if you want. This one was particularly adorable because it was built to look like a tiny old-fashioned general store! 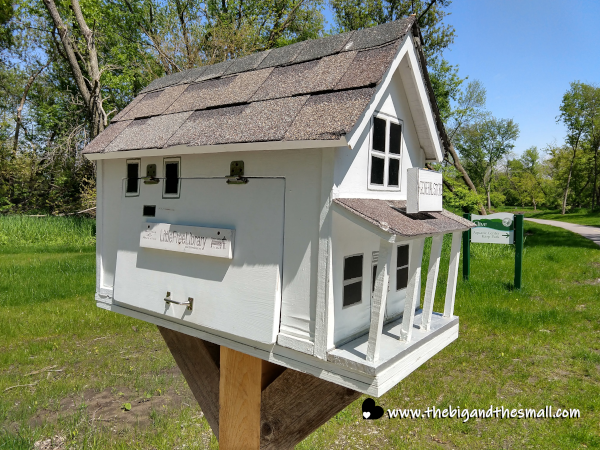 Our whole ride from my parents house to the aquatic center and back took about 45 minutes, and that was with a nice stop to rest before we headed back. It was a perfectly pleasant way to spend an afternoon, and I'm hoping the weather cooperates to give us more nice days like this while we are here. There are tons of other bike trails in Iowa and we plan to check out at least a few!

Do you like to ride a bike? Does your state/home have good trails around? Have you ever been someone who bikes to work? What do you think when communities up public art or little free libraries? I think it makes places so much better!