We are officially back in the States right now, but let's hop back over the pond for a minute to the day we spent in London last week. We ended up with an entire day there due to having to leave France early thanks to an air traffic controller strike, but the extra expense of a night at a hotel we weren't planning on meant we didn't have any room in the budget to do anything too exciting. (Phew, that was quite the sentence!) 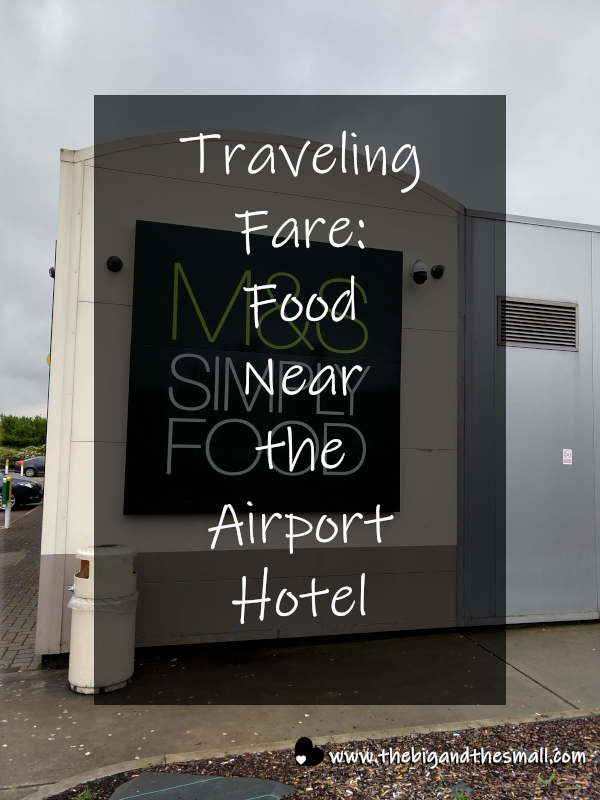 Our hotel was right by the airport, so the only places within walking distance were Starbucks, McDonald's (what are we in the US?!) and an M&S Simply Food at the BP petrol station. None of these are super unique options, but we decided to make the best of it!

The first night we landed at the hotel we were exhausted from the stress of last minute travel so we went with the easiest option - McDonald's. To be fair, we had actually planned on a kebab place, but it turns out that place only existed on Google maps and not in real life, so McDonald's it was. Even though we have eaten at McDonald's in the UK before, this time around they had some new options - including items you can't get in the States, even though they are inspired by/named after certain states. Crazy, right?

Our full order included the "The New York Stack in a Sesame Seed Bagel" and "The Alabama Chicken with a Smoky BBQ Mayo". They were currently out of sandwiches inspired by Mississippi, South Carolina, Kansas City and Nashville. Why the switch to cities? Why no Iowa? I guess we'll never know... We also got some fries and the nacho cheese thingies I have loved before to round out our meal. 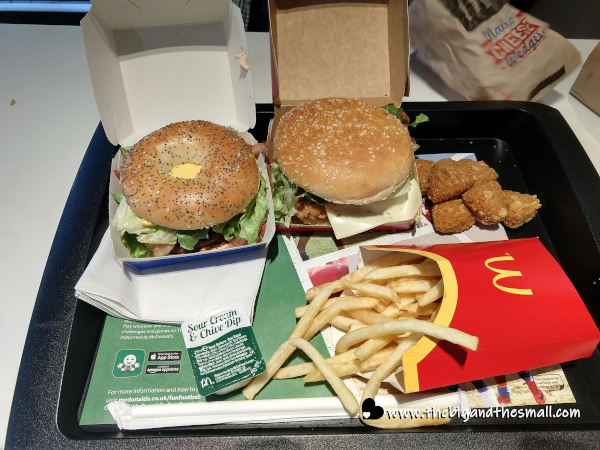 Joel was a fan of the New York sandwich, but I think I'm just not a fan of burgers on bagels. I like burgers, I like bagels, just not together. The Alabama sandwich, however, was quite delicious. The crispy chicken with the mayo was excellent! I was also super hungry so that might have colored my opinion. 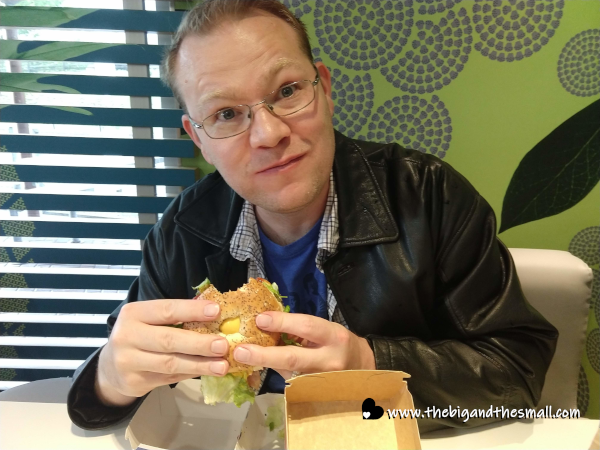 For a drink we just got a Diet Coke as I've learned to like the version available in Europe (it's different than the US!). It came with a paper straw which I haven't encountered before. I know these are better for the environment but I did not like the texture of it. I'd rather just drink without the straw altogether. Also, when we left Joel tried to get a refill on the Diet Coke and the guy at the counter just said, "Sorry mate, this isn't America." Whomp, whomp. 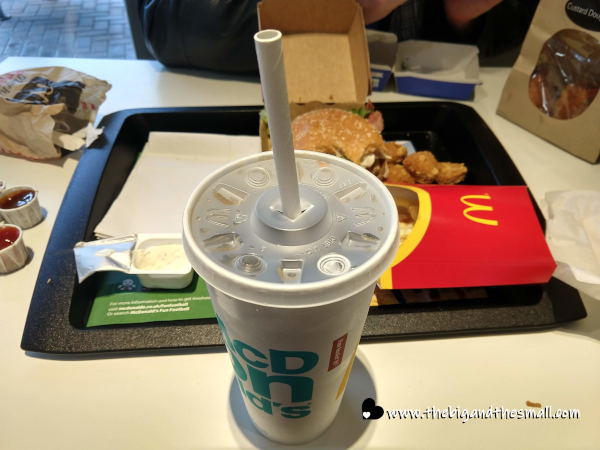 The next day we didn't want to have McDonald's a second time so we went to the M&S Simply Food at the gas station and decided to try the most British food we could find. Turns out there were a lot of options that fit that description. There were a whole bunch of premade sandwiches available, in all sorts of crazy flavors. From spicy chicken vindaloo to prawns there was almost anything you could imagine! We decided to go with a pack that had three flavor selections, as well as one that was chicken, mayo and sweetcorn. Look, we are from Iowa, arguably the sweet corn capital of the world, and I have never seen sweet corn on a sandwich before. What are these Brits up to? We also got two different salads, some crisps and a drink as part of a meal deal, and some lemon cakes for dessert. We might have gone a bit overboard. 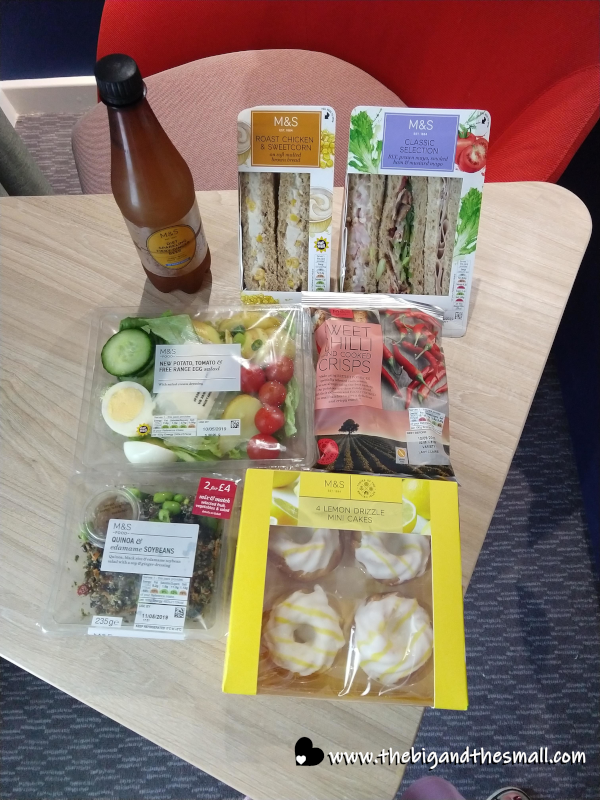 The three sandwich selection contained "classic selection" of a BLT, prawn mayo, and smoked ham & mustard mayo. The BLT used a sad rendition of American bacon and was just okay. The smoked ham and mustard mayo was meh. But Joel loved the prawn mayo. This was literally just shrimp and mayonnaise on bread. It looked revolting to me, and thankfully Joel didn't insist I try any. I don't like shrimp in the first place, and shrimp from a gas station with mayo? No thank you. 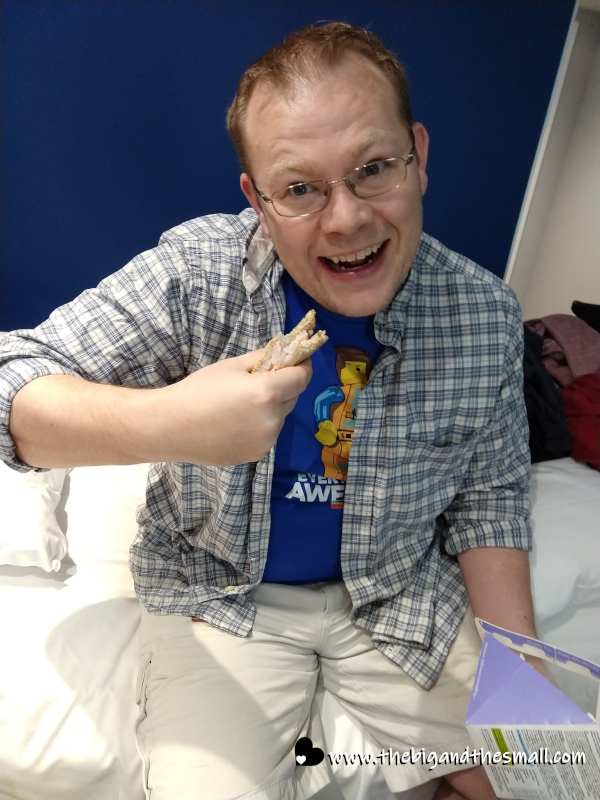 I did quite enjoy the roast chicken and sweet corn sandwich. I think the Brits might be on to something including corn in a sandwich! It kind of pops in your mouth and adds a great flavor. Perhaps I'll have to try some homemade ones here now that I'm back in the land of sweet corn for a while. 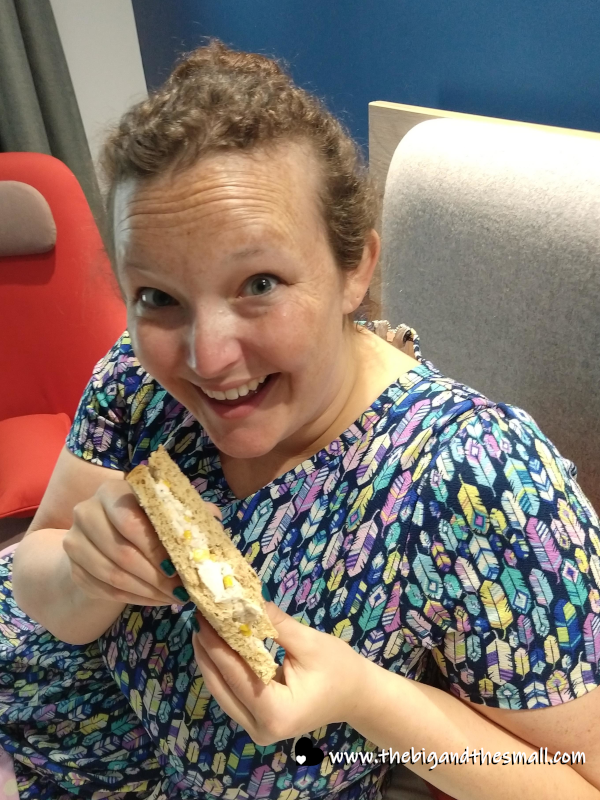 Joel also loved the drink we picked up and declared it his new favorite drink of all time. It was "Diet Sparkling Fiery Ginger Beer". (Blech) You can tell how much he loved it by how crazy his eyes are here. 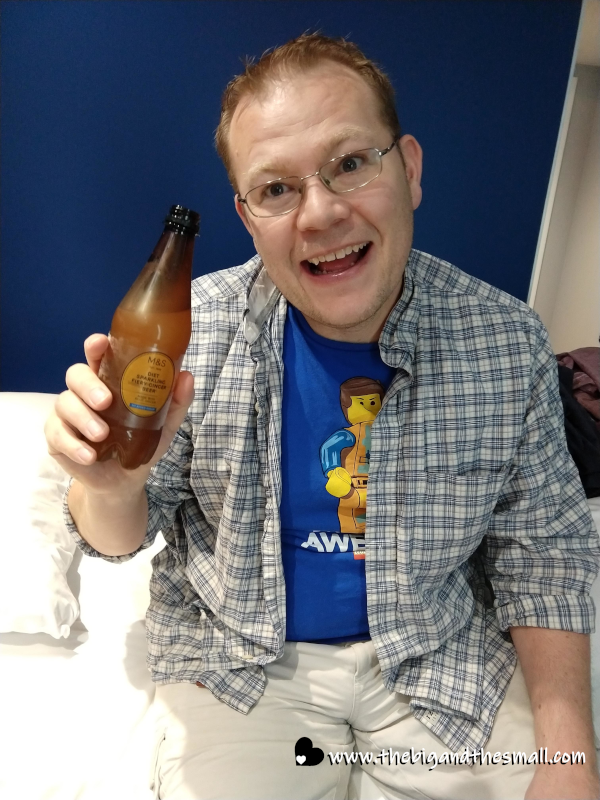 One of the salads we got was a quinoa/black bean/edamame mix which seemed way too healthy for gas station food and was quite delicious. It came with a vinaigrette dressing that added a ton of flavor. The second salad was fairly normal - lettuce, tomato hard boiled egg...but the odd part was the addition of slice baked potato pieces. We actually ended up saving that one and ate it on the plane on the way home the next day. I can't say I'll be adding potatoes to my salads anytime soon. The lemon cakes were amazing (full disclosure, we had bought some the night before with our cheese so we actually ate those two days in a row. Shhhhh.)

So what do you think? Are you dying to try any of those special State sandwiches? Any of those gas station sandwiches catching your eye? Would you be brave enough to try gas station shrimp? Joel is still here to tell the tale! Steve, if you're reading this, are these sandwiches weird or are we weird for thinking they are weird?