Hello, USA! (Or, Why We Will NEVER Fly Norwegian Air Again)

When last we left you, dear readers, we were in London for an unexpected day before our travels to the US started the next day. I had high hopes that our little adventure of having to leave France a day early would be the only bump in the road on this leg of our travels, but alas, I was wrong. 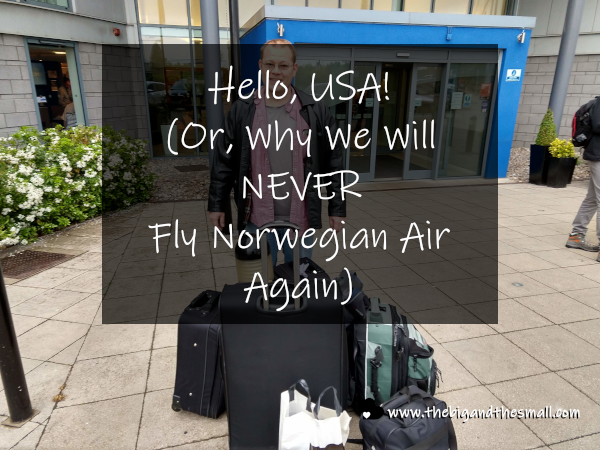 Friday morning started out very promising with a free delicious breakfast at the hotel. All of our stuff was still packed up and ready to go, so we were outside waiting for the shuttle to the airport with plenty of time to spare. Plus the hotel let us pay for the shuttle with a credit card so we didn't have to figure out how to get any pounds! (We spent our last £6 cash getting to the hotel from the airport on Wednesday). The shuttle came as scheduled, we boarded, and made it to the airport with no incident.

Then it started to look like things would go even better than usual for us! We were booked on an 8:15 bus from Stansted airport to Victoria Station, then an 11:20 bus from Victoria Station to Gatwick airport where our flight to Chicago was leaving from. So we took the 7:30 shuttle from the hotel to make sure we would be there in plenty of time. Turns out there was also a 7:45 leaving Stansted to Victoria Station and they let us get on that one with our 8:15 tickets! When we arrived in Victoria Station early, we also go to take an earlier bus, so we arrived at the airport a full 2 hours earlier than expected! 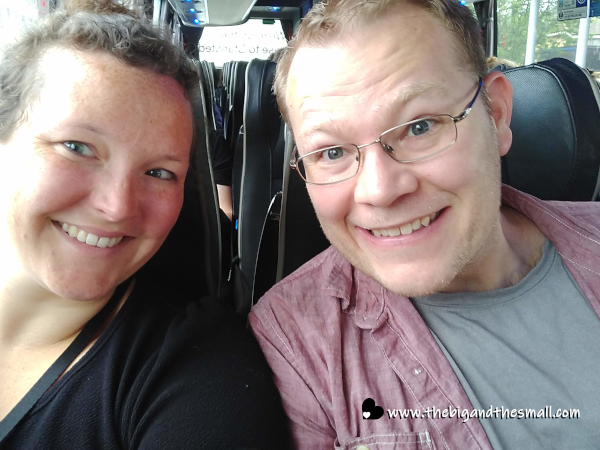 I would always rather sit and wait at the airport than risk running late so I loved that we got there so early. Our check-in process with Norwegian Air was easy, both of our checked bags were underweight, and everything was going so smoothly! After our easiest trip through security yet, we found a place to sit and chill until the gate would be announced for our flight. (Yes, we were so early there wasn't even a gate listed yet.)

A good three hours later, the gate was listed so we picked up all our stuff and headed there. Here's where things started to go sideways. In order to get into the gate waiting area, we had our passports checked (for like the 3rd time) and then we had to get in line for our carry-on luggage to be weighed. As soon as I saw that I knew our luck was about to run out.

You see, we've been flying for 10 months, and our carry-ons have never been weighed. We tend to put more items in our carry-on to make sure our checked luggage is at or below the correct weight, as that is usually where you can get dinged on the price. Norwegian Air, however, decided to price gouge people right at the gate!

If they had weighed our carry-ons at the same time as our checked bags, we could have adjusted our packing so that each bag was at the correct weight. I firmly believe we had the correct amount of weight total, we just packed it wrong. However, because they waited until long after our checked bags were out of our hands, we were in trouble.

Both of our bigger carry-on bags were overweight. They confiscated our passports and tickets and sent us over to the lady in charge who gave us three choices: 1. Pay £80 ($104) per bag, 2. Throw away items until our bags were at or under weight, 3. Don't get on the plane.

What. The. Heck. We tried to reason with her about our checked baggage being under the weight limit, she could not have cared less. They had a big trash can there for people to throw stuff away in, and I saw them change the bag in it at least once. We were not the only ones facing this dilemma. It was heartbreaking to watch people throw away perfectly good items just to avoid paying the exorbitant fee. 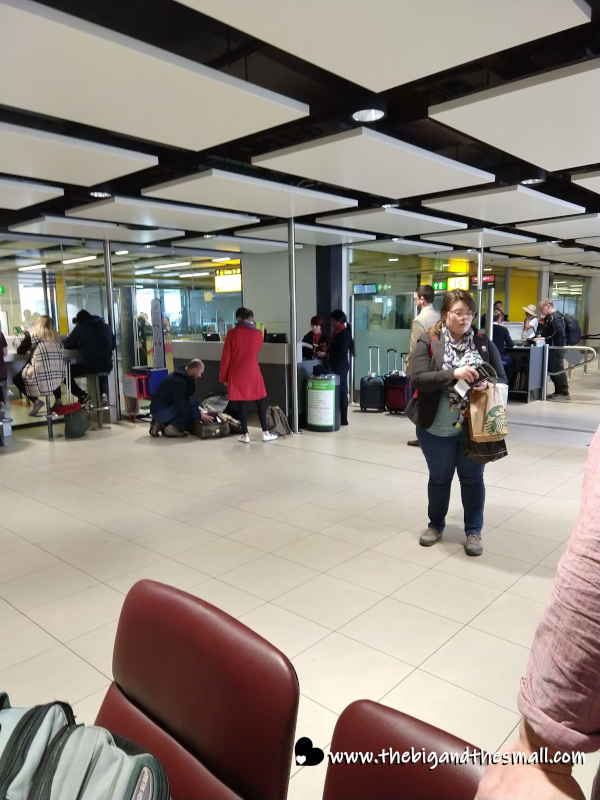 Also, Norwegian Air, if you are really going to be such jerks about this policy (that was hidden in the fine print when we bought the ticket) at least have a heart and DONATE the items you force people to get rid of. If we could have cleaned out our stuff and known that clothing and other things were going to a charity shop, I probably would have gone that route. But it felt much harder to simply put things in the garbage that were perfectly good. That's not good for the environment, not good for the customers, not good for anyone. The only thing this policy helps is Norwegian Air's bottom line.

In the end, Joel and I sucked it up and paid the $208 fee. I hated doing it, but I just couldn't bring myself to put perfectly good items in the trash. When you add that fee to our unexpected hotel costs, this trip back to the States has so far cost us $360 we weren't counting on - that's usually an entire month's budget for us. It hurts, so friends and family, expect us to be extra moochy this summer. 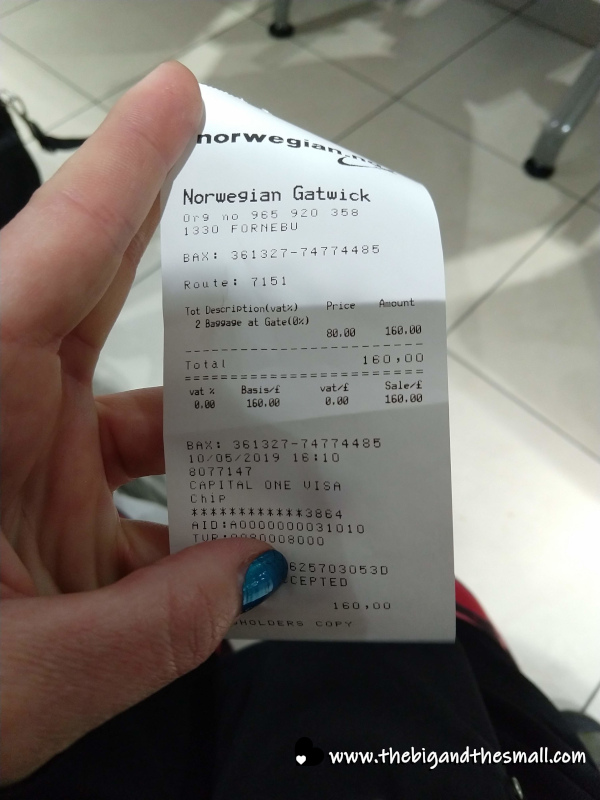 So as not to be completely negative, they did have decent food on the flight, that was included in our costs. All of our other budget flights (WOW Air, Ryanair) have not included food or drinks. However, I'd much rather have to pay $20 for some food/drinks on the flight, than shell out $200 to get my dang luggage on the flight and get free food. Even if the macarons were delicious. 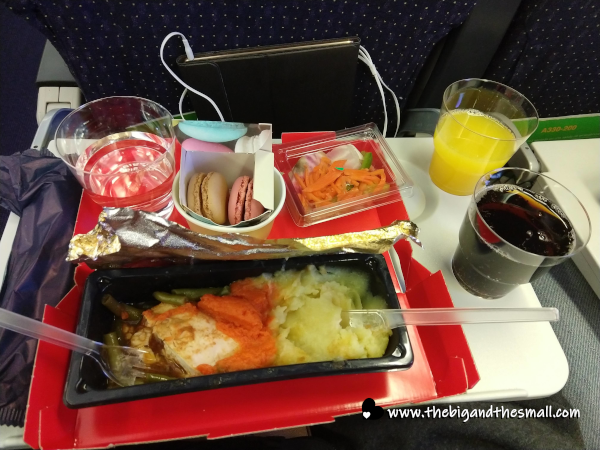 The flight itself passed rather quickly, we watched a movie we had downloaded on my tablet (The Spy Who Dumped Me, it was pretty bad) and I started and finished an entire novel. I stayed awake most of the time (except for about 20 minutes) which helped me not have any jet lag when we got back! When we landed in Chicago we had an easy time getting through passport control (it felt weird not to have to justify why we were here) and all of our luggage was present and accounted for! Joel's dad and stepmom picked us up, then it was off for some pizza and the 3.5-hour drive home.

Overall the travel was easy if you don't count Norweigan Air's stupid heartless luggage policy. Yes, there could have been bigger bumps in the road for us, but on a limited budget, an extra $208 really hurts. We've made it, and we've definitely learned our lesson about packing correctly. Part of our goal during this time back home is to purge our belongings yet again so we can pack a lot lighter when we head out again in July!

Have you ever had to pay extra for your luggage on a flight? Did you think it was fair or unfair? Any other airlines with crappy policies we should avoid? Let's chat!

So I will make a mental note - Norwegian Air is a train to Arhus (our term for unexpected and painful loss of a large quantity of money you can't avoid, I'm guessing yours may now be "Norwegian air carry-on bag").   I hope they see that their policy is being told and raged against.

Haha sounds like I'll have to hear your story about Arhus! We should definitely start using "Norwegian air carry-on bag" as a shorthand. Like seriously, that was an entire month's food budget just gone. UGH. I'm not sure our social media reach is enough to really impact them, but if I can save a few people the hassle it will be worth it!