Yesterday we ventured out to a few small towns close to us (30 minute drive = close in rural France) so we could do some exploring. Our main goal was to visit a 9th century Abbey located in the town of Moutier D'Ahun, but it turns out the one day a week that the place isn't open is, of course, the day we were there. Ah well, we had a great day anyway and made some plans to return before we leave. 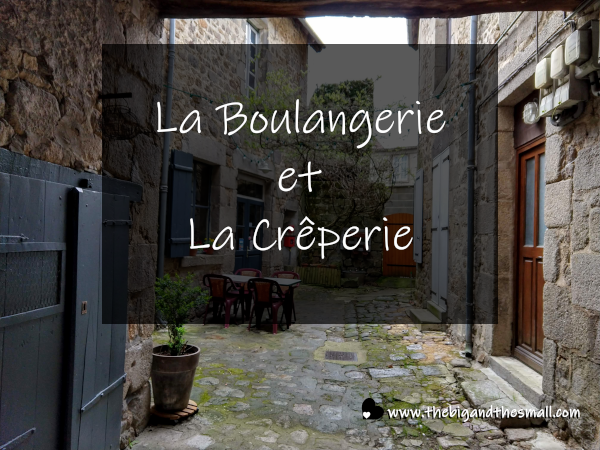 The first order of business of the day (before we discovered the Abbey was closed) was to get some food. We've only eaten out once so far in France (we are on a budget) and that time we got some pizza in Limoges. While it was delicious, France isn't exactly known for pizza, so this time we wanted to go for something a little more French. Enter "la boulangerie" (the bakery) and "la crêperie" (the, um, place that makes crepes.) We would have eaten at just the crêperie but the menu posted outside let us know it was a tad expensive, so we decided to whet our appetites at the bakery first. 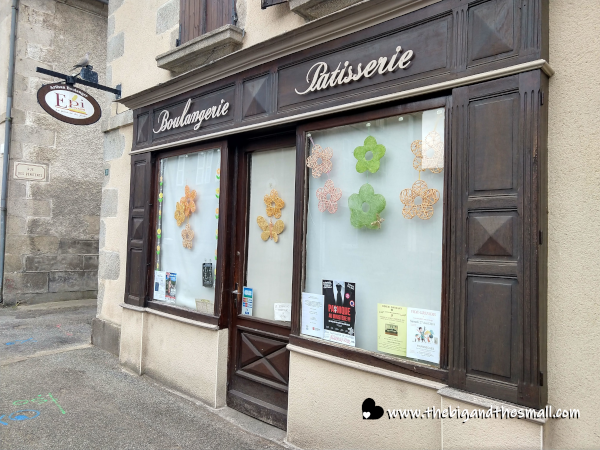 I took that picture as we were leaving later in the afternoon, which is why it is closed. Be assured, when we went by those windows were open and showing off a glorious display of baked goods both sweet and savory. There were so many appealing choices, and since we couldn't decide on just one thing, we got two. This worked well since it was our first food of the day, and while Joel is happy to eat sweets any time of day, I don't like to start my day with sugar, I need savory. Though I was tempted by these adorable chicken sweets (cookies on a stick, I think?) by the cash register. 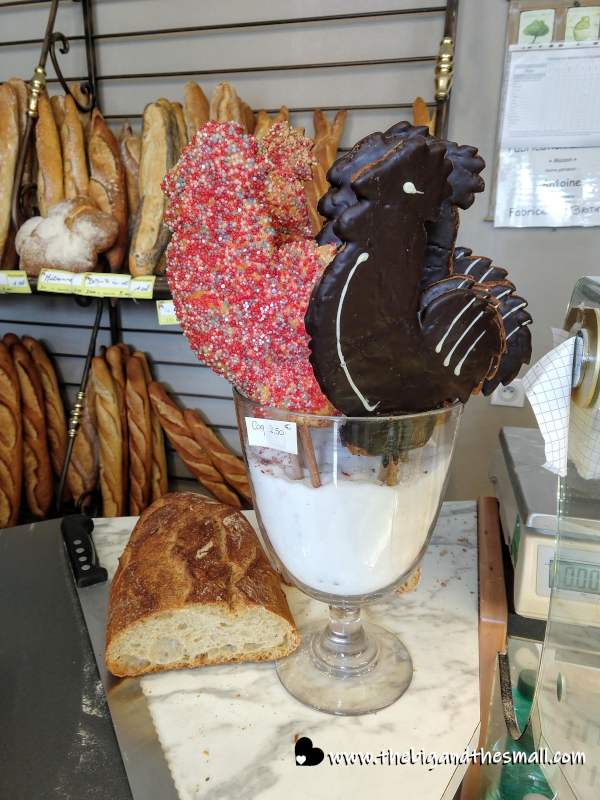 As soon as I spotted the ham and cheese croissant that looked like it was smothered with crusty baked cheese on top, I was sold. I knew I had to have it, and I am so glad I did. It was amazing. Not only did it have the crusty cheese on top, the inside was filled with a creamy, smooth cheese that was so flavorful; the ham was better than your average lunch meat ham, it was thick and salty, more like an Easter ham. Altogether with the flaky croissant the taste was so good I only let Joel have a single bite to try. I am craving one again now and wondering if it might be worth that 30 minute drive... 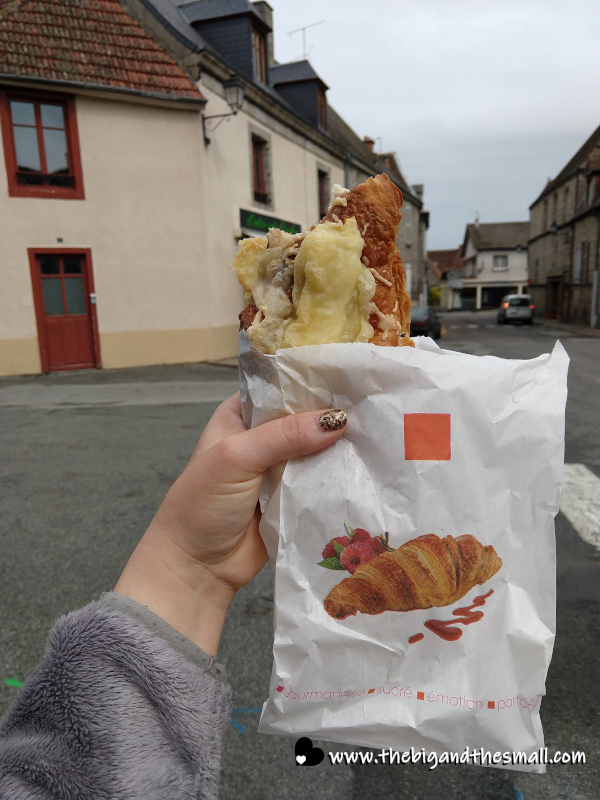 Joel decided to get a sweet, of course, and went for what looked like a small almond cake. I believe it was called an "almondine". The cake was dense and chewy, with a subtle yet distinct almond flavor. It wasn't exactly my style (could have used some chocolate in my opinion) but Joel loved it, as you can tell by this expression. 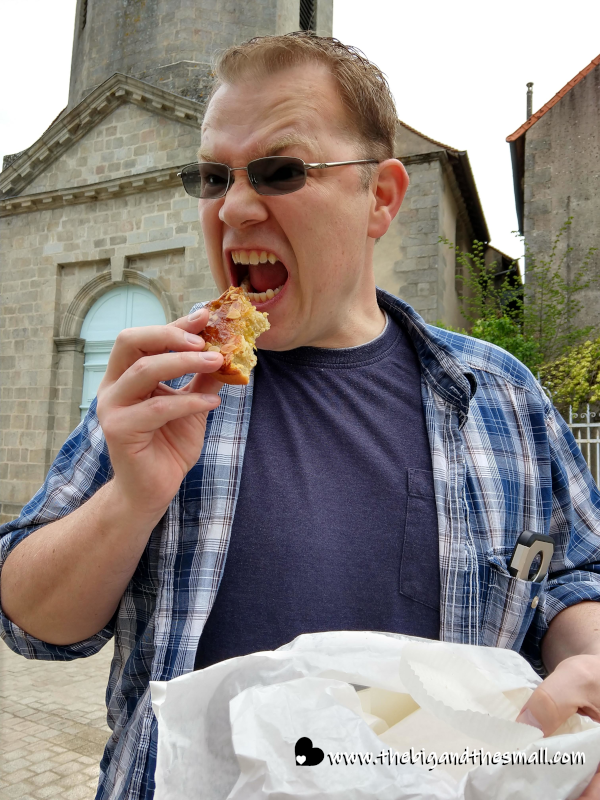 The crêperie looked adorable from the outside and I was quite excited to eat there. Good thing, too, since it was literally the only restaurant in town. (And the next town over also had one restaurant, which was closed on Tuesdays, go figure. We had tried there first). 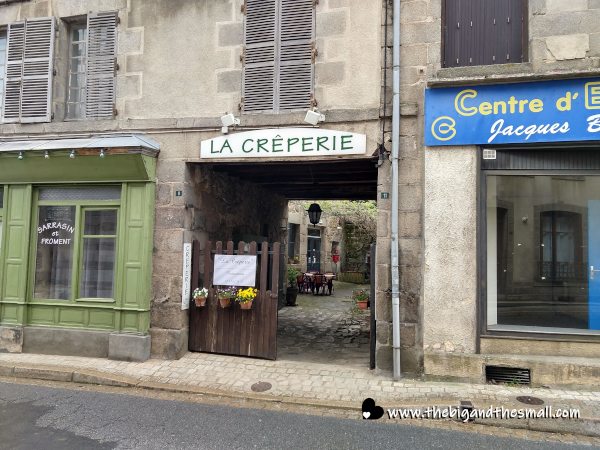 The inside was fancier than I expected - setting the scene more for a Friday night date than a random Tuesday lunch. Which might explain the prices, I suppose. The least expensive crêpe was €7, and the most expensive was €13. 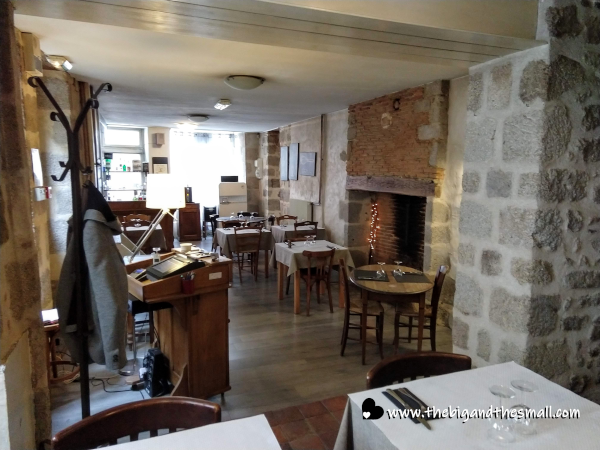 We ordered a ham, cheese, and egg crêpe and decided to just get one to split, then order a second if we were still hungry. The crêpe came quickly and looked very appetizing with the sunny side up egg smiling at us from the middle. It tasted as good as it looked! The crêpe part was crispy and buttery, which combined well with the salty ham, creamy cheese, and for me the best parts were the ones that got smothered in the runny egg yolk. 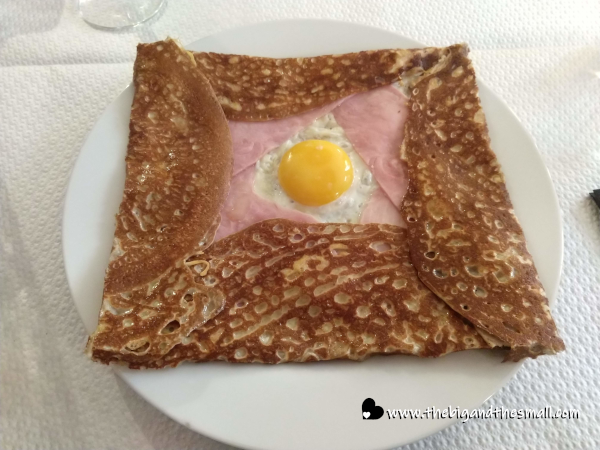 However, as delicious as it was, it was not worth €7. We decided not to try any of the more expensive ones from the menu, as appetizing as they sounded. Luckily our bakery treats had done a good job of filling us up! I think the lesson we learned is the crêperie is a great place to eat if you aren't on a strict budget, but if you want filling, delicious food, the bakery is where it's at! When we had back to see the Abbey I'm going to talk Joel into letting me get another one of those croissants...

Have you had crêpes before? Did you make your own or get them at a restaurant? Did you go for sweet or savory or both? I kind of wish we had tried a sweet crêpe as well but it just didn't seem worth the money.