The Troll House: Before & After

Here in France, we are housesitting for a British ex-pat named Bob. When Bob first purchased this property the main house was in good shape, but many of the outbuildings were not. One of the first projects he took on was a little 18th century stone cottage right next door. The place was in such bad shape it took almost two years to restore! Now I'm here to share the before pictures Bob took before starting his project, and the after pictures of how it looks today! 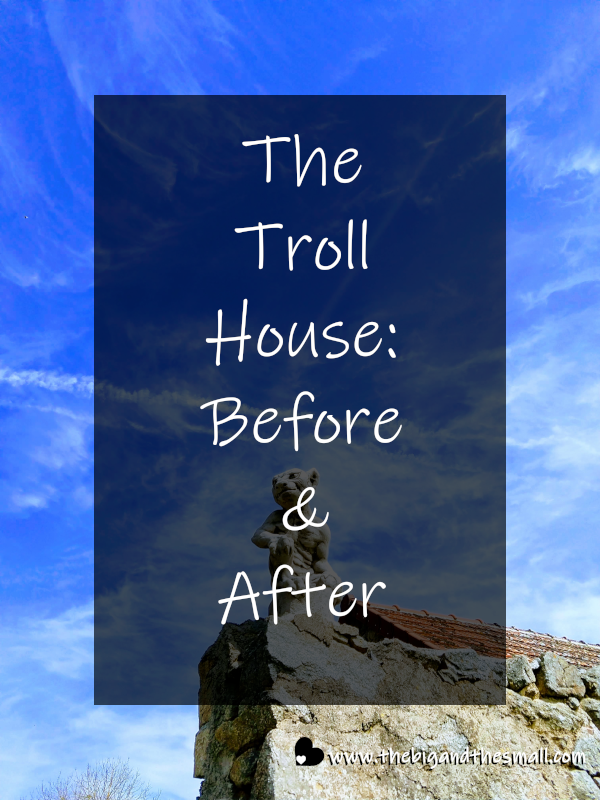 One of the first things that needed to be done was clearing the courtyard attached to the small building. It was full of tires, discarded metal, scrap wood, and other junk. 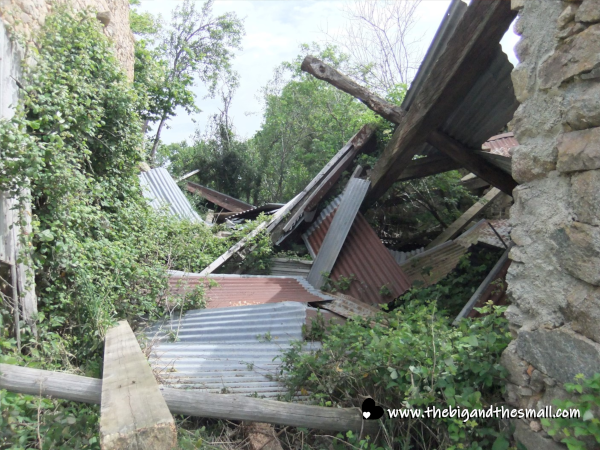 Now it's a big beautiful space that would be perfect for stringing up some cafe lights and hosting an al fresco party! 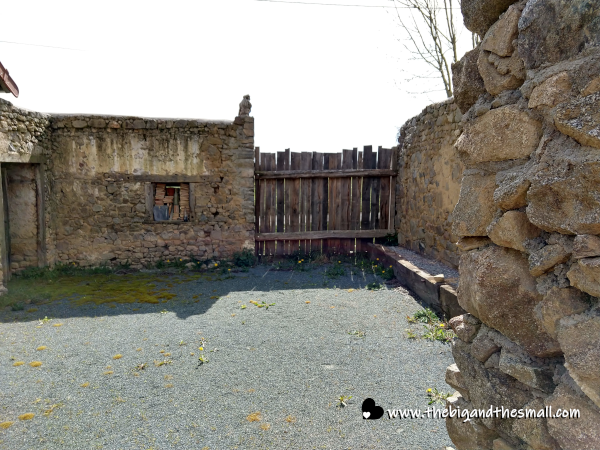 This next picture was taken standing in the junky courtyard and looking at a small window that looks into the troll house. It was blocked up with stone and other rubbish, so Bob had to clear it and then rebuild the window. 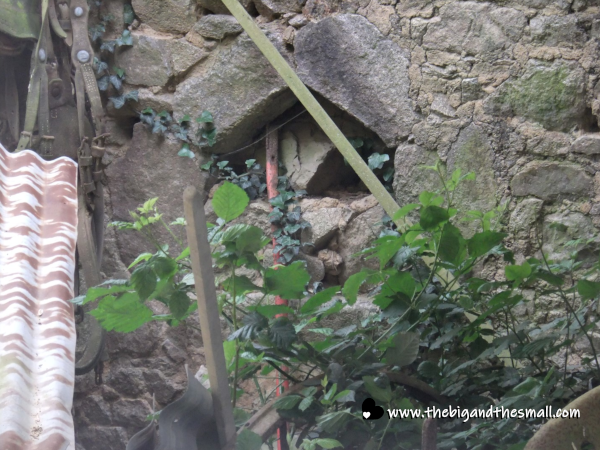 The glass was tough to fit since it is such an odd shape, but it turned out really neat in the end! 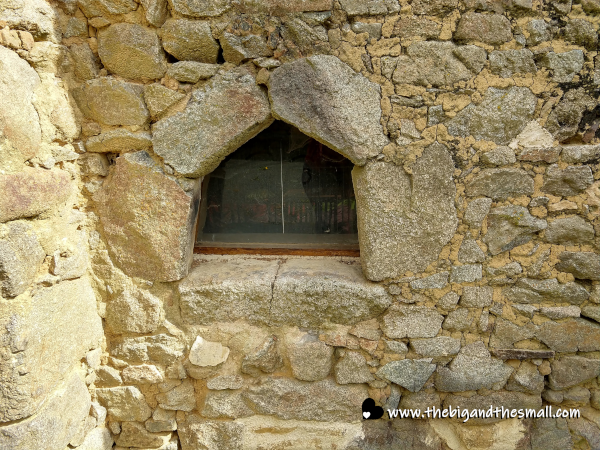 Not only was the courtyard a mess, but the building itself was also in pretty bad shape. You can see here that a large portion of this wall had completely fallen away! 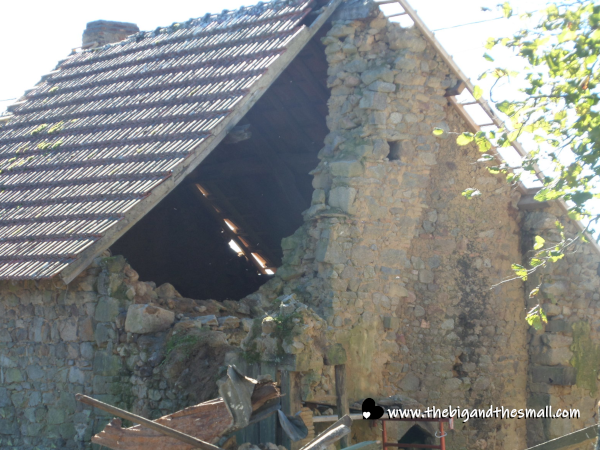 Bob and a friend worked to match the stone to the rest of the wall and even added in the wood framed window on the second floor. 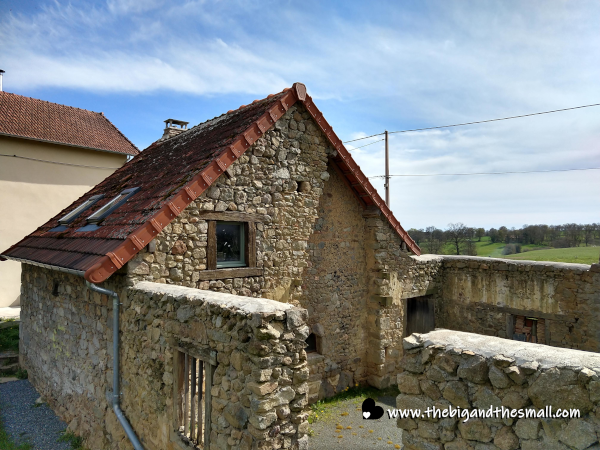 Here is another angle of that same broken wall, this one taken from standing in the courtyard. Apparently, there were even some trees in with all that junk! 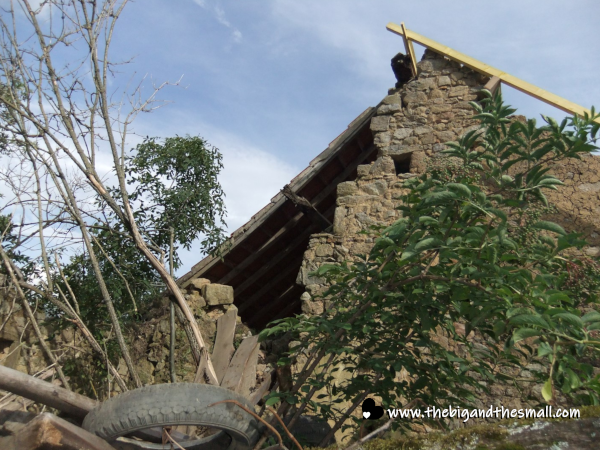 And here it is today, restored to its former glory. 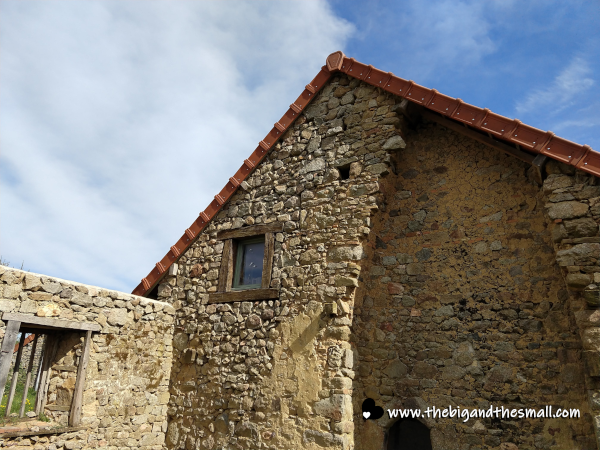 I only have one picture of what the inside of the house looked like before, but it's a doozy. It's a little hard to tell, but this is supposed to be a fireplace and you can see the large wood beam mantle piece above it. 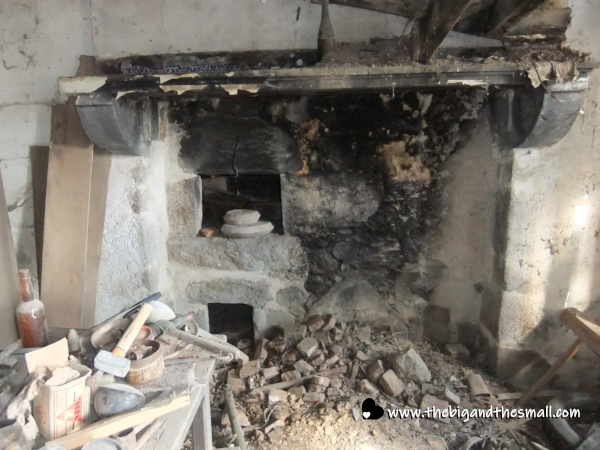 The after picture makes it a lot more clear what it was supposed to be! Isn't this gorgeous? I can just imagine curling up in here by a fire (which you would need because the house has no central heating.) 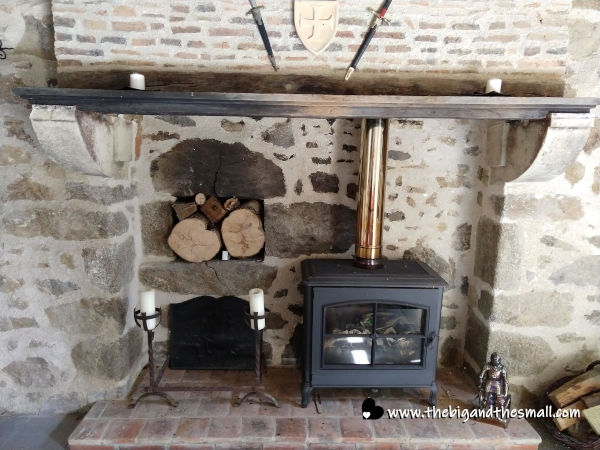 This next view is of the walkway between the troll house (left) and the main house (right). The before is so overgrown you can't see the path or hardly any of the main house. 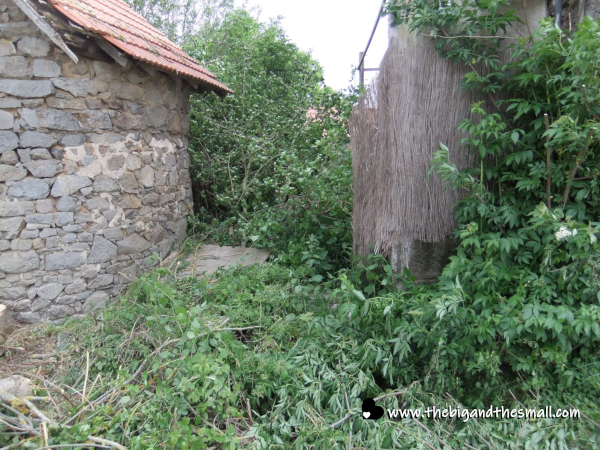 The after is rather dramatic - with a new walkway complete with stairs, and you can see the porch that Bob added on to the main house. (There used to be a large septic tank there, and there's a gross story about removing it that involved it breaking...I'll leave the rest to your imagination.) The beautiful iron fence on the right is an antique that Bob found (he used to deal in antiques) and adds a lot of character. 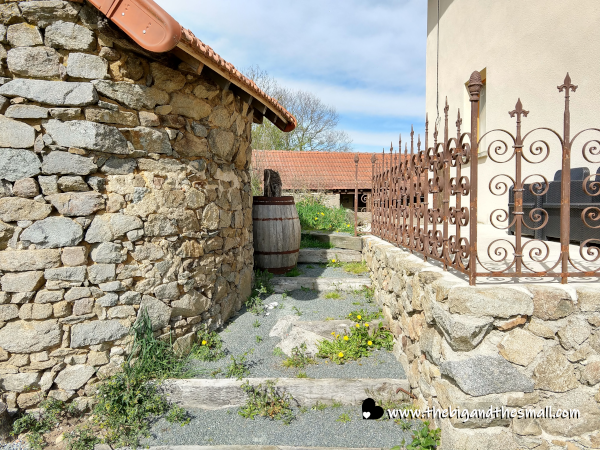 This next picture takes us to the front of the house and shows the portion of the roof that was missing. 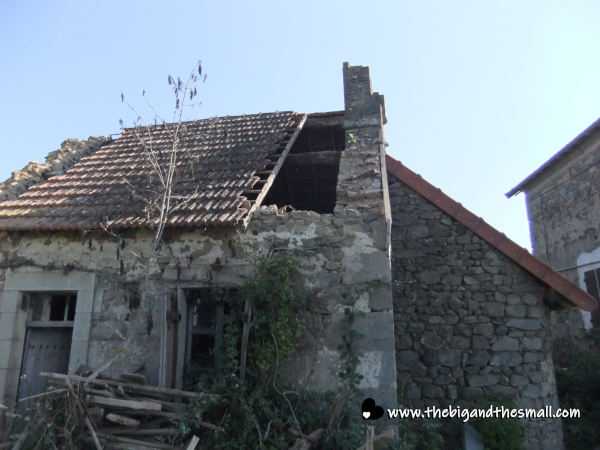 Bob found tiles that matched the original as closely as possible and now you can hardly tell that hole was ever there! 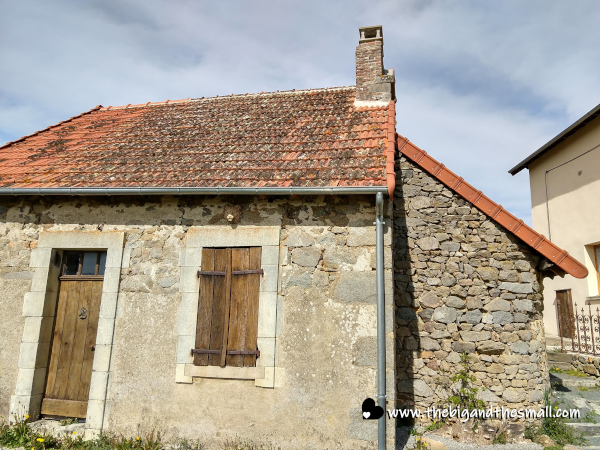 This next view of the front door shows again all the overgrowth and damage that was going on around the house. 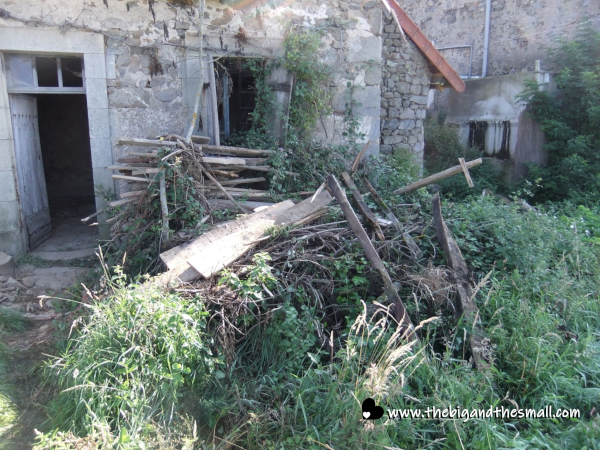 It also shows again how much the space between the troll house and the main house changed! 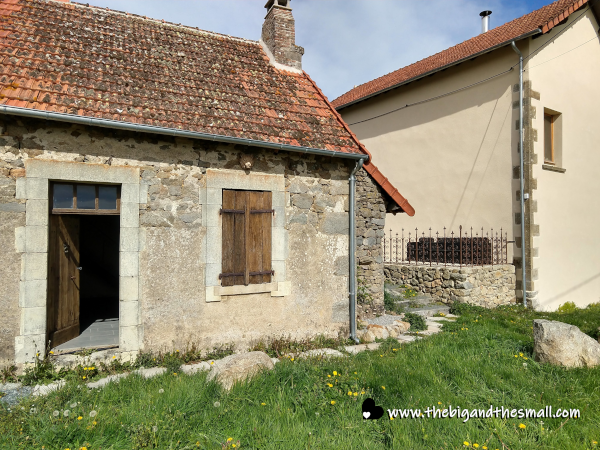 This last view of the front of the troll house shows the amazing amount of overgrowth that was there. )The door you see to the left is the door to the courtyard.) 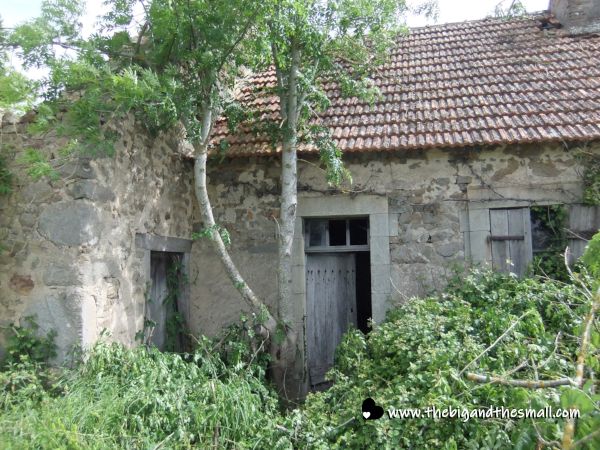 And the final after photo of this amazing little house! 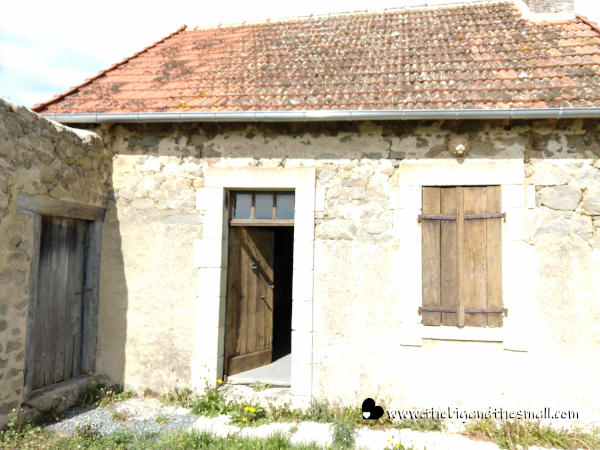 I just realized that almost all of these photos are of the outside, so I think I'll have to come back with another post that features the inside of this adorable little building. Bob has turned the upstairs into a movie viewing space complete with a large TV, surround sound, and even vintage theater seats!

So what do you think of this makeover? Pretty incredible, eh? Which transformation do you think is the most dramatic? Would you have the patience to spend two years fixing up something like this? I don't think I would, but I sure do love it.