A Care Package From the USA

What feels like long ago, back in the country of Wales, I wrote this post about the particular foods (and food like stuff, ha) that Joel and I miss from the USA. Shortly after writing that post several of the things we had been missing were found! Steve brought us a box of Lucky Charms (I don't even want to know how much that cost him) and a bottle of ranch dressing (It was Paul Newman not Hidden Valley, but beggars can't be choosers.) He even managed to scrounge up a can of pumpkin in time for Thanksgiving! 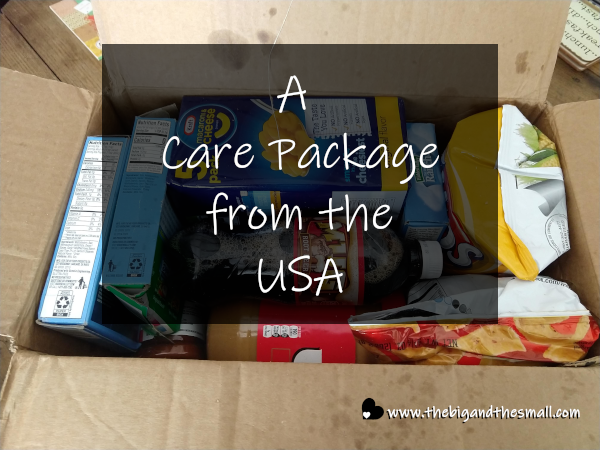 The more we settled into the UK the more we found foods that we loved there - inexpensive and delicious cheddar cheese, cereal varieties we don't have back home (honey nut cornflakes anyone?), Red Leicester cheese (pronounced "lester" for some unknown reason), a million varieties of bacon, mac and cheese pie, haggis, and have I said cheese, yet?

Then we moved to France. And despite my high hopes of delicious French cheese and bread, I've actually found myself culinarily disappointed here (I should say this is in part because we are too cheap to eat out very often, I'm sure the restaurants are great!) So now we miss food from the USA and food from the UK. It's rough this traveling the world business!

We posted a short lament on Facebook about not being able to find peanut butter here at all (we finally found a tiny jar in the 5th store we went to...) and a friend messaged me about wanting to send a care package that would include some good American peanut butter. Normally I would have tried to talk her out of it (shipping is expensive!) but we were really jonesing for some good stuff and she was really excited about it (she used to send things to her daughter when she was abroad and loved it) so I conspired with her to get some of our favorite American goodies over here.

The shipping took ages but this week the box finally arrived and I could not contain my excitement or the fact that I had known about it previously - Joel could tell as soon as he saw the look on my face after I signed for the package. At least I managed to keep it a secret up until that moment! I had sent Becky a list of things we missed so she could pick and choose what to send us, so what we got was a surprise for me, too. 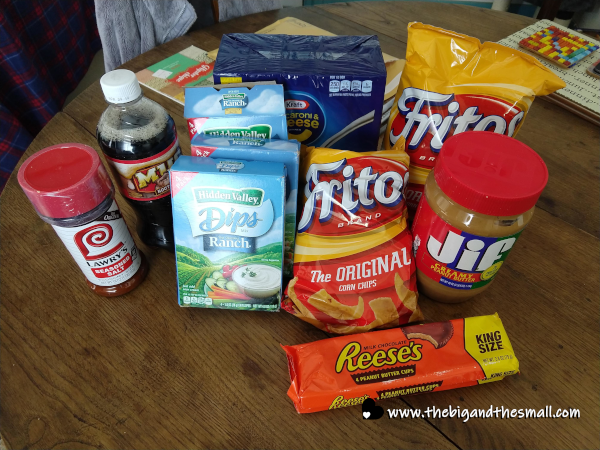 I cannot emphasize how much this package made our week - probably our month! There are so many benefits to traveling the world but sometimes you just need a taste of home to make things even better. I was most excited about the Kraft mac and cheese and Fritos. My mom would want me to emphasize that I was not raised on boxed mac and cheese, nope, I fell in love with this stuff as an adult. My love of Fritos, however, does stem from childhood. The only way to eat chili as far as I'm concerned is with sour cream, cheese, and Fritos! You better believe I've already made a big batch and have been chowing down this week. 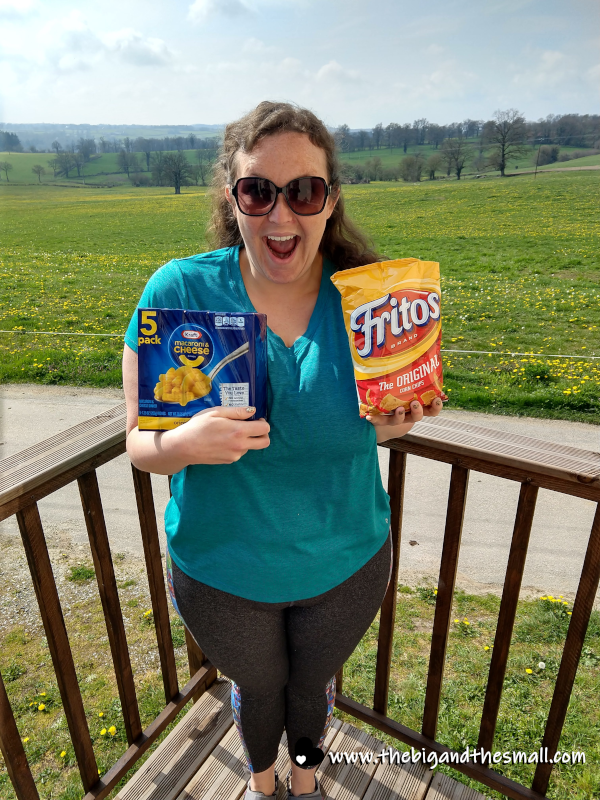 When I posted about our package on Instagram someone commented that she missed boxed mac and cheese when she was abroad as well. There's just something about that powdered cheese flavor you can't get any other way! However, she said something brilliant - she had a friend who would just send her the cheese packets, rather than the whole box! I mean, duh! The shipping cost would be so much cheaper for just the packets, then the sender can use the pasta for something else back home, and the recipient can just use regular macaroni. I'm filing this one away for future use. 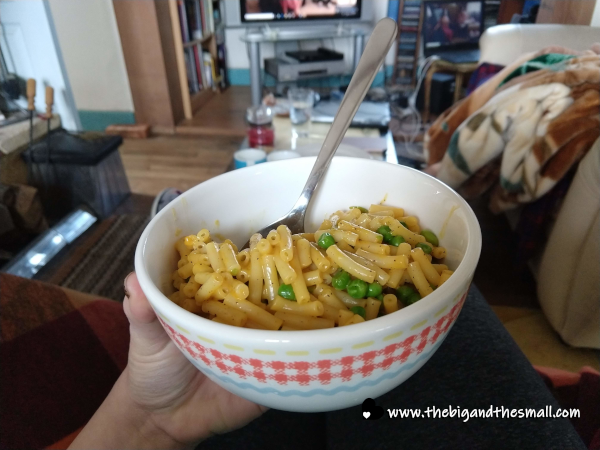 Joel was excited about everything else in the box - the ranch, Lawry's (I'm psyched for both of these as well), the Reese's, the root beer, and, of course, the peanut butter that started it all! 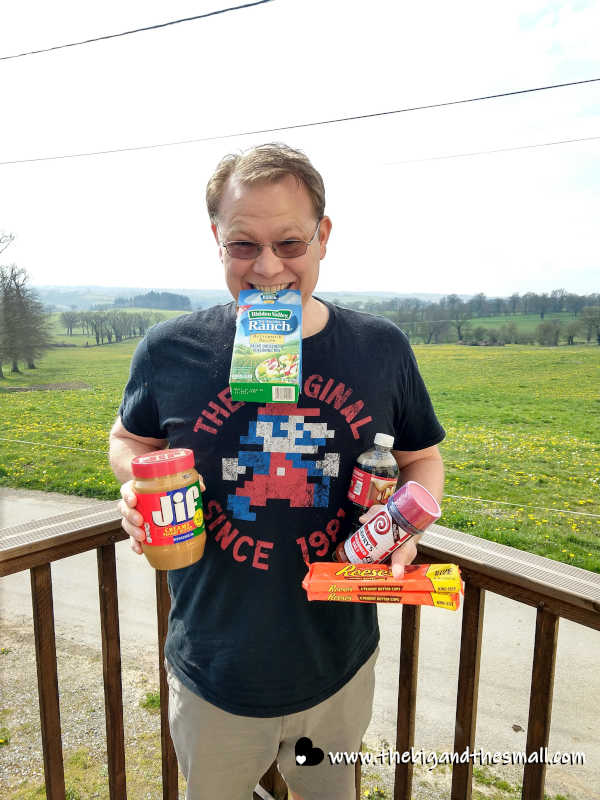 He tucked into the root beer right away and I think you can tell from the look on his face that he very much enjoyed it. All these extra treats mean that we need to up our exercise this week so we can keep on track with our weight loss. These particular American foods aren't exactly healthy. 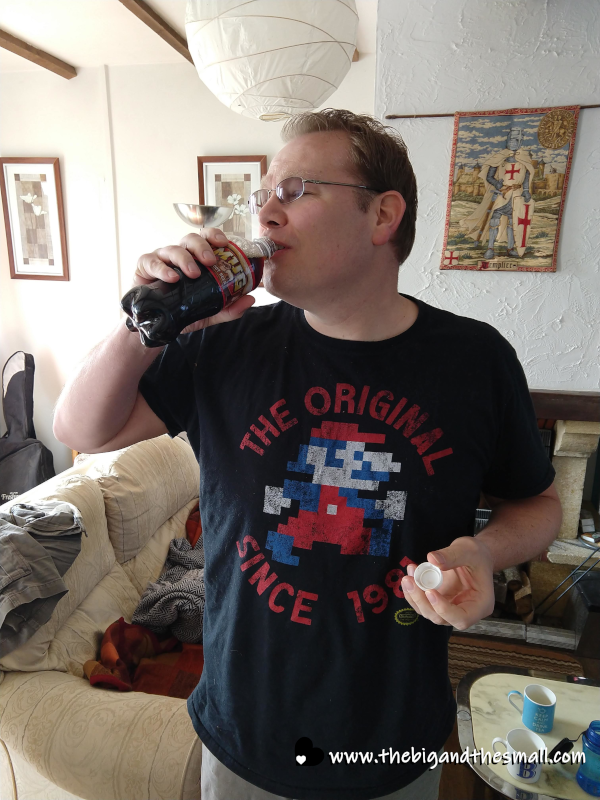 The Hidden Valley ranch packets we received have to be mixed with either sour cream (for the dip) or milk and mayonnaise (for the dressing.) While this would have been super easy in the UK, it's actually a little more difficult here in France. Almost all the mayonnaise they have is mixed with dijon mustard, and while I don't mind that on a sandwich, I think it would change ranch dressing too much. We did manage to (after a month) find some Hellman's yesterday at a random store, so we are set on that front now. When I was in the dairy aisle of the grocery store yesterday I did some Googling and found that "fromage blanc" is a pretty close to sour cream equivalent here France - supposedly it has the same texture just slightly less tang. I bought some and it worked in my chili, so I mixed some up with the ranch to make dip! 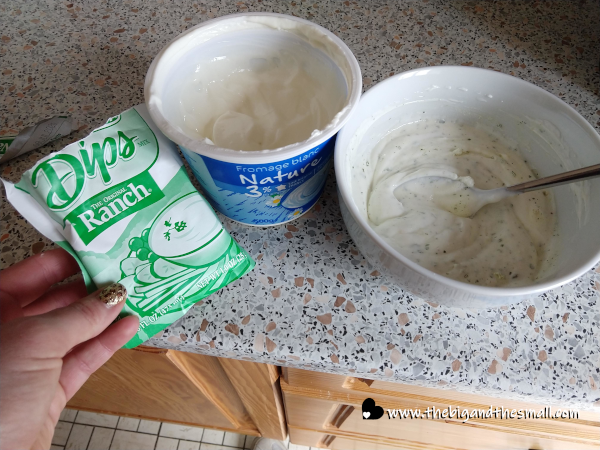 I'm about to go prep some carrots to eat with this ranch dip (gone are the days of baby carrots guys, I have to peel and cut real carrots abroad) so I'll have to let you know how it tastes! A quick taste test yesterday was promising, but these sorts of things usually get better after sitting for a day or two.

A huge shout out and thank you again to Becky for sending us all of these wonderful treats, you've made our time in France so much more awesome!

Have you ever lived abroad and missed particular foods from home? What did you miss? Did a saint send anything to you? If you haven't gone abroad what do you think you would miss if you did?