Last week I shared about the amazing pizza we had when we lunched in Limoges. Today I'm here to tell you about the rest of our day in the big city! 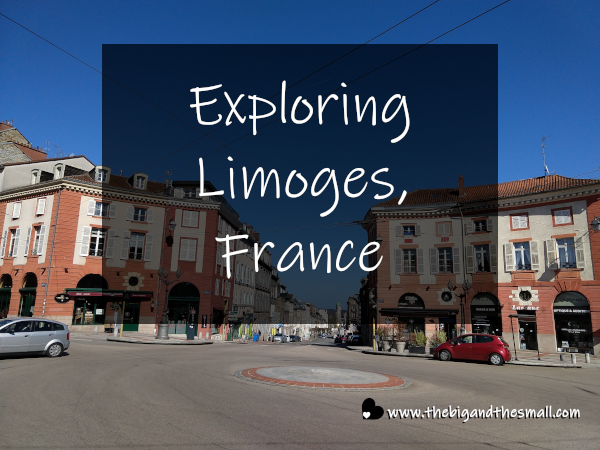 After stuffing ourselves full of the most incredible pizza, we decided to head out on foot to explore the city. The parking we had paid for was good until 3 pm, and it was just a little after noon, so we had plenty of time to wander around. I read just enough French for us to follow some signs guiding us to the city center, and thankfully it was a gorgeous, perfect weather kind of day. Everywhere we went there were city buses crisscrossing the city. They are different than any I have seen before as they run on these power lines that hang above the streets. We are pretty sure this means the buses are electric! What a great way to be more environmentally conscious. 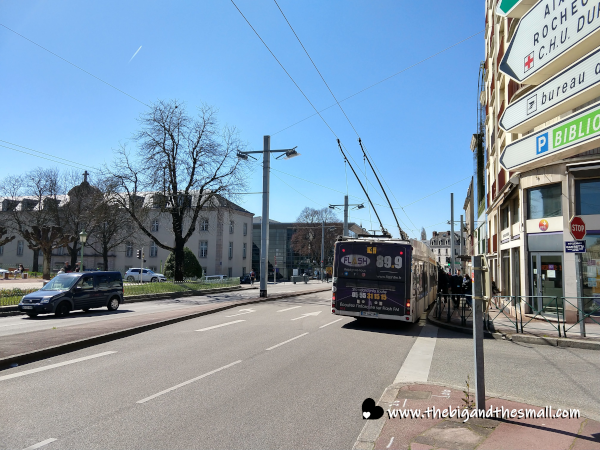 At the city center, we found the city hall for Limoges, which is one of the most beautiful city halls I have ever seen. The building could easily be mistaken for a castle with its turrets and intricate details. There was a whole courtyard in front of the building as well, full of topiaries, flower beds, and a fountain that didn't have the water turned on yet. This seemed to be a gathering place for many locals; there were benches strategically placed around the courtyard and so many people were there, from professionals eating a quick lunch to parents playing with small children. We grabbed a bench and sat for a good hour enjoying the weather and the people watching (okay and Joel played a game on his phone and I read a book on my Kindle.) 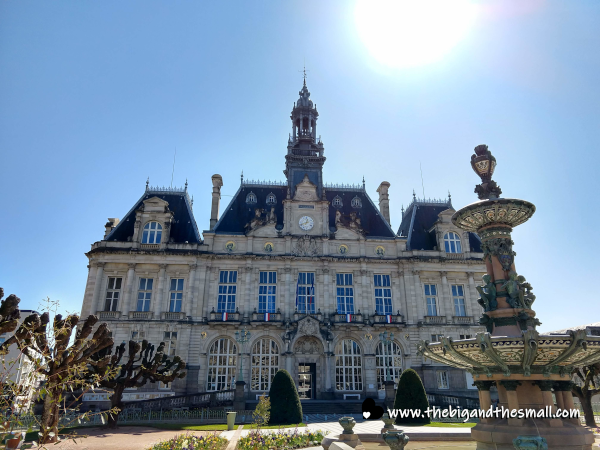 Right near the city hall was an aquarium, which we passed on going into for two reasons - it was over €9 a person, and I'm generally of the mind that if you've seen one aquarium you've seen them all. (I tend to feel the same way about zoos!) So instead we continued our wandering up and down the little side streets, stumbling across adorable little boutiques and cafes. This on in particular made me laugh as it uses the Facebook colors/font and is called "Facefood". 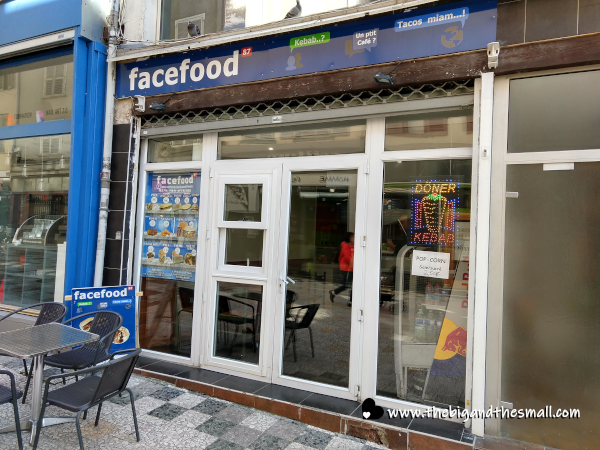 We were most excited when we found a game store! It was closed when we first found it (because everything closes between 12 and 2:30) so we had to circle back around to check it out. It was an adorable little store with games available up front and a section were you could play at the back. 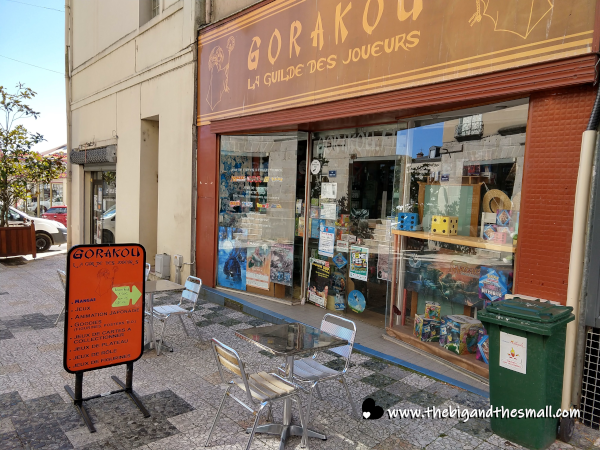 They had a great selection of board games...including my very favorite one of all time - Dominion! We have found a way to play it online, but of course I still miss the real deal. A new set has come out since we left the States, and I was half hoping this store would have a copy available. The new set is called Dominion: Renaissance - so how cool would it be to have a copy of that in French from France?! Alas, they did not have one. 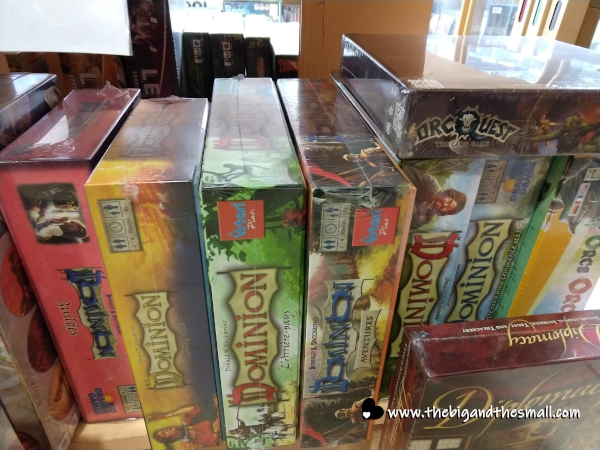 Eventually, we had walked off enough of our pizza that we were hungry for dessert. We found a cute little cafe open just down the way from the game shop, and treated ourselves to some pie. Normally we'd only get one slice and split it, but today we went for two slices - sharing both. Joel let me choose and while I wanted the lemon meringue pie and the chocolate cake, when the shopkeeper told us the apple pie was her favorite I switched the chocolate cake out for that. The apple pie was decent but the lemon meringue pie was amazing, and I wished I had gotten the chocolate cake after all. Oh well. 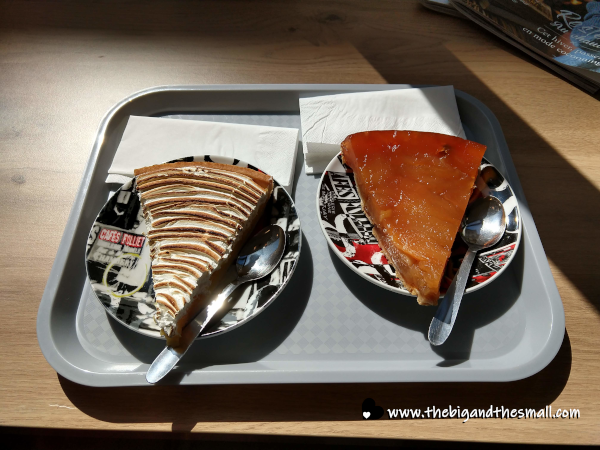 Not too long after that, it was time for what we really came to Limoges for... can you guess it? We were there to see Captain Marvel! That's right, we finally found a theater showing the VO ("version original") aka it would be in English (with French subtitles) and not dubbed over in French. We moved our car from one paid parking spot to another (oh cities) and then found the movie theater. 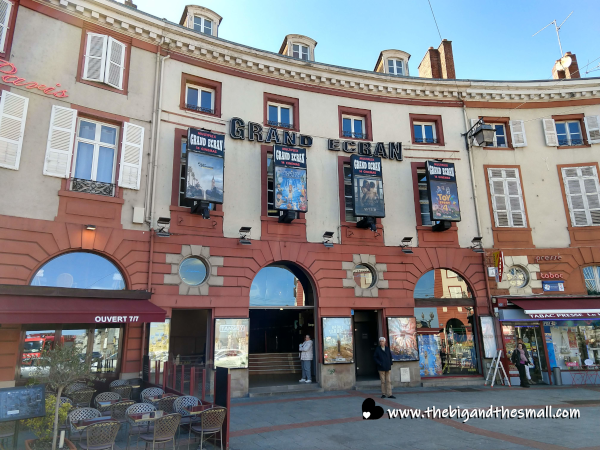 Getting our tickets turned out to be super easy, as they had one of those kiosks where you don't have to interact with people. Once we clicked we were going to the VO the rest of the process was even in English! It was pricey, at €10.50 a ticket .Considering we used to pay $10/month for unlimited movies in the States (RIP MoviePass) that hurt a little bit. But we decided it was worth it (and will be worth it again to see Avengers: Endgame later this month!) 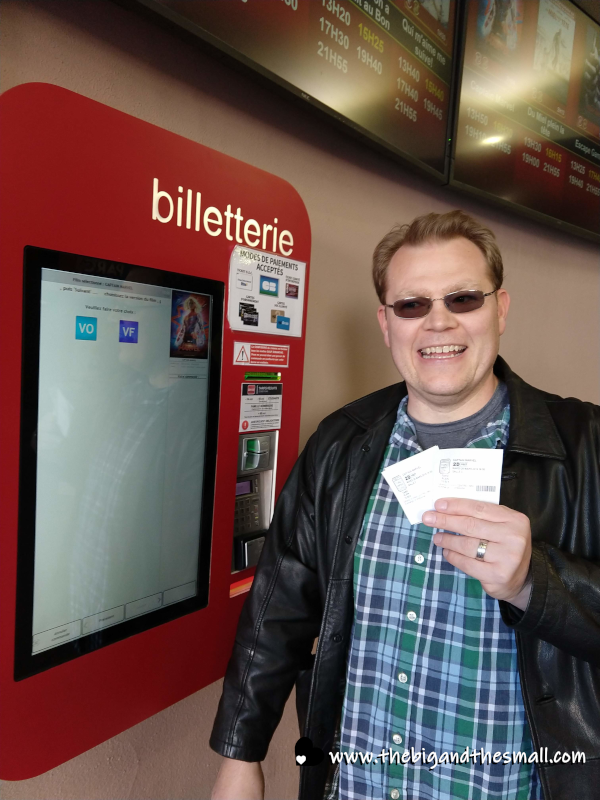 We still had time to kill before the movie so we did more wandering in a different area of the city, finding another game store (also no Dominion: Renaissance at this one, boo), some cute boutiques, and even a few secondhand shops! We also came across a shoe store with this odd bit of advertising in the window. 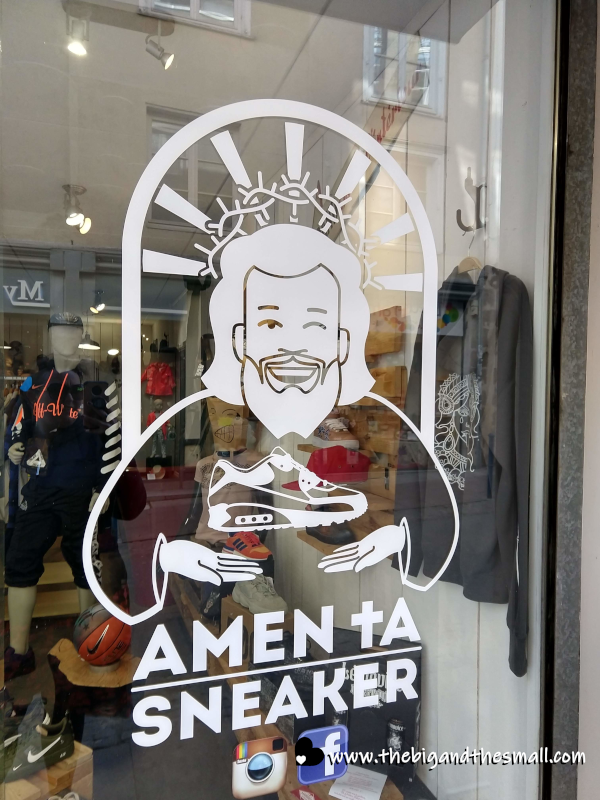 The movie started at 4:30 and I think we found why they don't do VO's very often - it was a huge theater and there were less than 10 people in the whole thing. Captain Marvel was excellent in my opinion (especially the music!) and it just made me even more excited for the next installment in the saga later this month. The whole Marvel Cinematic Universe is probably my favorite thing happening in movies right now.

On the way home, we had to stop for gas, and ran into the same problem we had the last time we filled up in France - the pump wouldn't take our card and there was no one manning the station! Luckily we again found a kind passerby who was willing to pay for our gas with their credit card while we gave them cash. Good thing, too, or we would not have made it home. Driving home at night was no picnic, but we made it safe and sound!