This week we decided to leave our humble little country abode and head over to the big city of Limoges, France. Limoges is about an hour and a half away by car, though I can tell you the drive feels a lot longer when you are driving an English car on French roads. 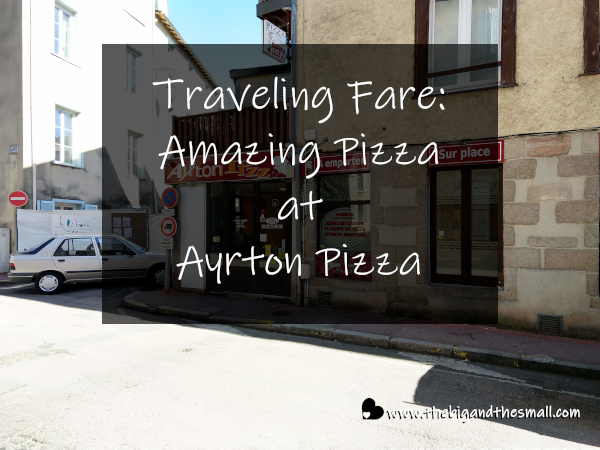 Once we were on the big highways the drive wasn't so bad, we loved making road trips and it's been quite a while since we've taken a long drive just the two of us. As we started getting closer to the city we were both getting hungry with a capital H, so Joel had me look up restaurants on Google maps. I love being able to just look ahead to our destination and see every restaurant available on the map - plus reviews! I checked almost everything listed in the area and we landed on pizza place for two reasons: 1. We've both been craving pizza lately, and 2. It had 4.9 stars on Google with almost 50 ratings. That's pretty darn high!

I'm so glad Google helped us find this place because we never would have stumbled onto it ourselves. It was a down a deserted looking side street and tucked into the side of a very non-descript building. I would say it's the definition of a "hole-in-the-wall" restaurant and we all know those are usually the best kind. 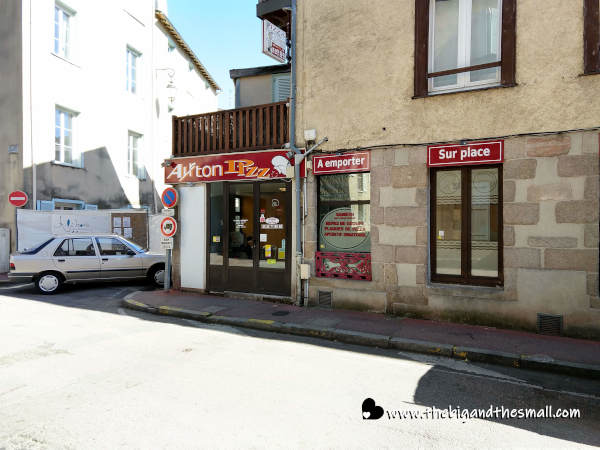 We ended up arriving a few minutes before the place opened at 11:30, which gave us just enough time to figure out how to pay the French parking meter. A kind young man who said he only spoke "a little English" helped us out when even Google translate didn't know how to give us the answers to all the acronyms on the machine (turns out "CB" means credit card). Of course, his definition of speaking "only a little English" and what I mean when I say I speak "only a little French" were vastly different - he was basically fluent as far as I could tell! 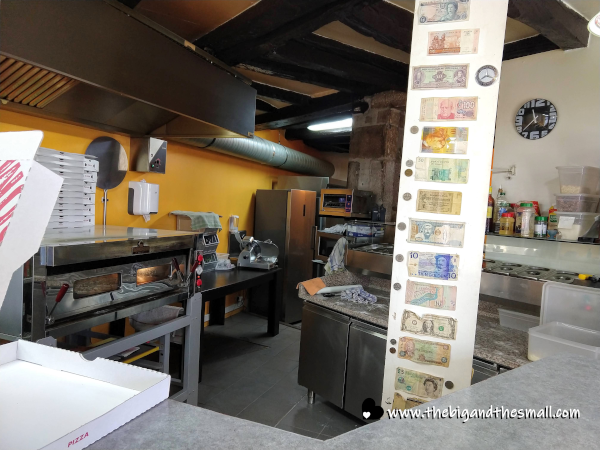 The second the restaurant opened (which happened as the one person working stepped outside to smoke a cigarette) we headed inside to figure out what we were going to order. I could actually read most of the menu and the ingredients listed so I was pretty impressed with myself. We tried to ask the guy which was their best pizza that we should order, but the only thing I really got across was "best pizza" and he thought we were just giving him a compliment. So we ended up just ordering a supreme pizza, and I did understand him when he said it would be a twenty-minute wait! We settled in at a cozy two-person table, that had a view of the delivery motorcycle sitting inside the restaurant. 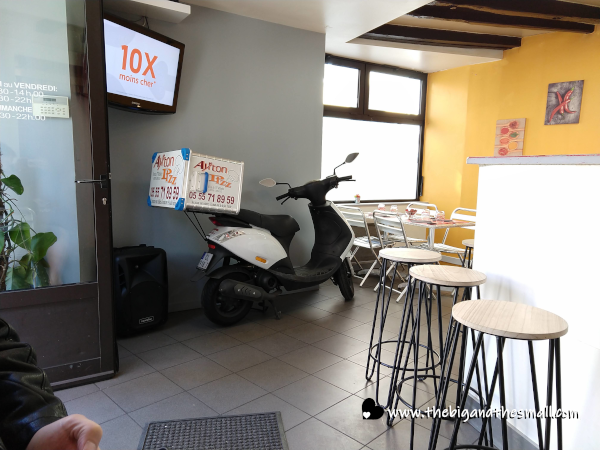 I was also able to ask where the bathroom was (winning!) and I stepped through a red curtain to discover a whole new seating area. The restaurant was bigger than I initially thought but still pretty small. I think if every table was filled about 25 people could eat here at the same time. 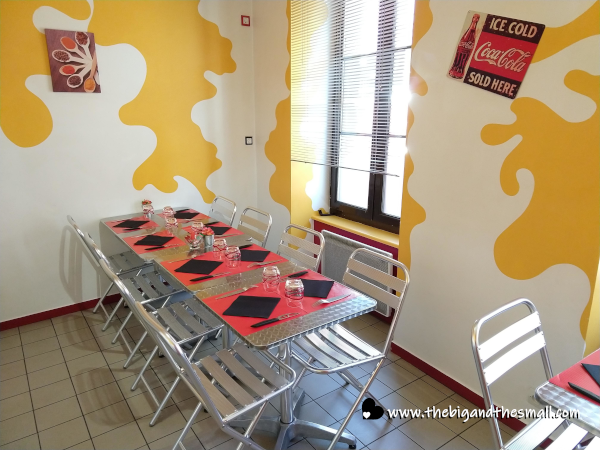 After what felt like a short wait (no small feat when we are hungry) our pizza arrived! The guy went ahead and split the pizza in two, giving us each half on our own huge plates. It looked so delicious I couldn't wait to dig in and burned the roof of my mouth a little bit (worth it). Maybe it's been a long time since I've had real pizza (aka not frozen) but this pizza was so, so good. The crust was my favorite kind - paper thin and super crispy, almost like a cracker. At first, I wasn't sure about the whole olives on top, thinking I would have preferred them to be sliced. But it turned out I liked the "pop" of a whole olive in my mouth when I took a bite, it was really something! 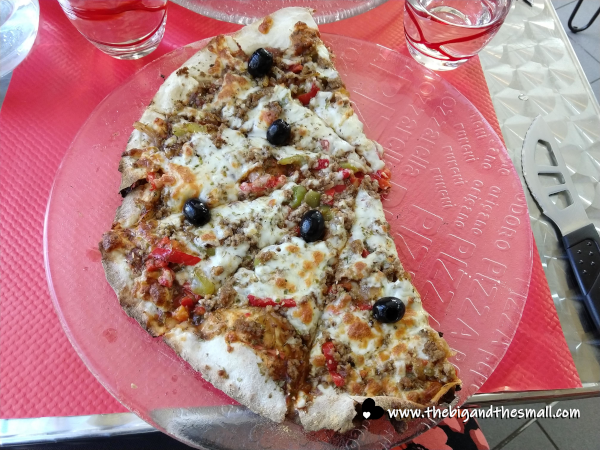 On every table was a small glass dish containing something called "sauce pimentee pour pizza" so of course, we had to give a try. (We usually like parmesan cheese and red pepper on our pizza but we haven't found that available since leaving the States, even at a Pizza Hut!) I was surprised to find the sauce was more of an oil than an actual sauce like I expected, but I put a little on my first slice to give it a try. Then I took two more packets and covered my entire pizza because it was amazing! It added a subtle spice that continued to build, and a great mouthfeel (pardon my pretentious term there.) I kind of regret not stashing the rest of the packets in my purse to bring home as I think it would elevate any frozen pizza to halfway decent. 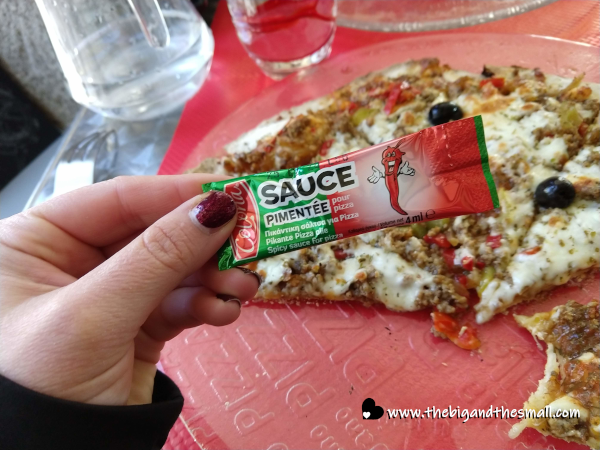 Even though we ordered a large pizza we both ended up eating our full half each before we left the restaurant. We could have taken leftovers and put them in the car for later, but the pizza was just that good, we didn't want to stop eating it! We almost ordered a dessert pizza to try (they had one with bananas on it) but decided we didn't have room for that after all. After a bit of trouble with the credit card machine (it seriously took like ten minutes to run our card) we had paid and were headed out the door. The total was €12.50 and considering that includes tax and tip it was a pretty good deal!

So what about you? Have you ever come across this "pizza sauce" before? Would you have gone for a pizza place or something more French? I do want to try something super French (snails perhaps?) at some point before we move to a new country!