On our day in Aubusson visiting Suzanne last week, after going to the market in the next town over, and getting a tour of her amazing home that dates back to 1780, we spent the rest of our time exploring the town. Her house is perfectly located on the water and about a two-minute walk from a whole host of shops, cafes, and restaurants! 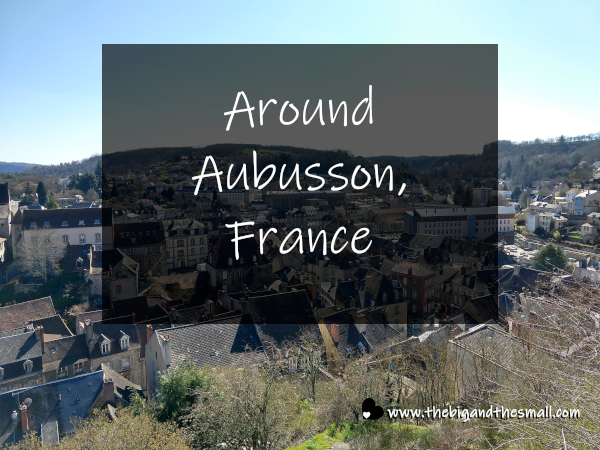 Suzanne has lived here for about five years and often hosts family and friends, so she is used to showing visitors around her adopted home. Our countryside housesit, while gorgeous and peaceful, has sometimes felt like it could be anywhere in the world - in fact, it reminds us a lot of back home (Iowa in the US.) So we really enjoyed coming to Aubusson which made us finally feel like, yes, we are in France! I'm sure part of that had to do with this adorable little bakery we found. 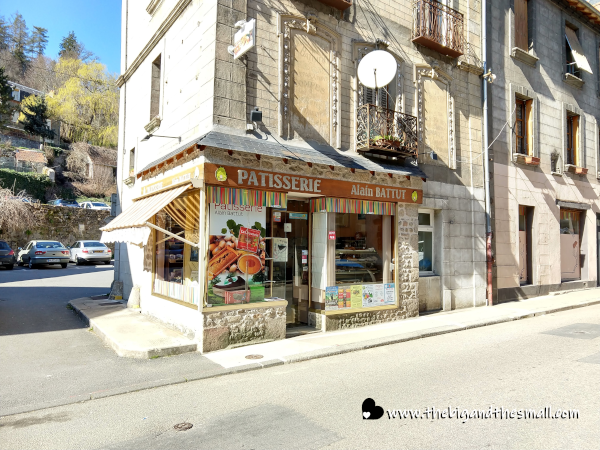 At the end, I'll share what delicious treat we picked up from here, but for now, you can just drool a little bit at all of these options... 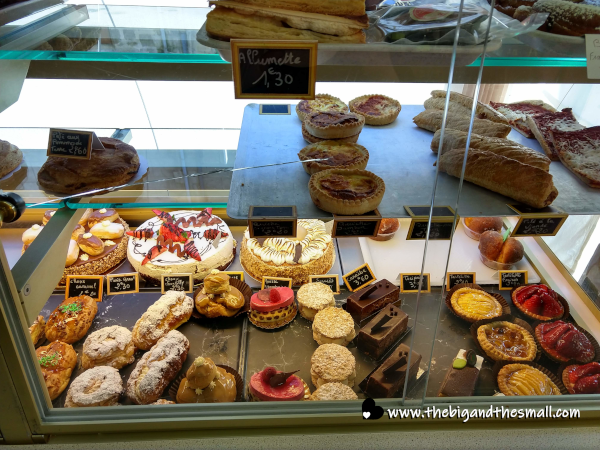 As we were walking Joel spotted a clocktower up on a hill and convinced us to walk all the way up to see it. I figured if I was going to eat a pastry I better get some exercise so we went along with him. The clocktower itself was nothing to write home about, but this view was incredible! The whole town of Aubusson was laid out at our feet. 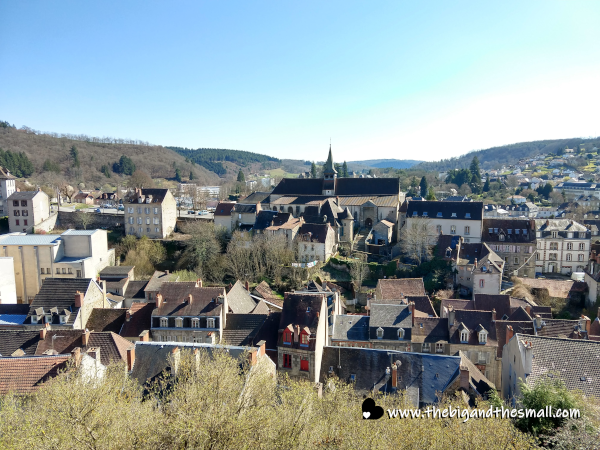 From there we walked along some paths that Suzanne said she had never been along before. This whole area was public and Joel and I were impressed at how beautiful and well-kept it was. With the lantern style street lights along the way, I can only imagine how beautiful it would be at night. 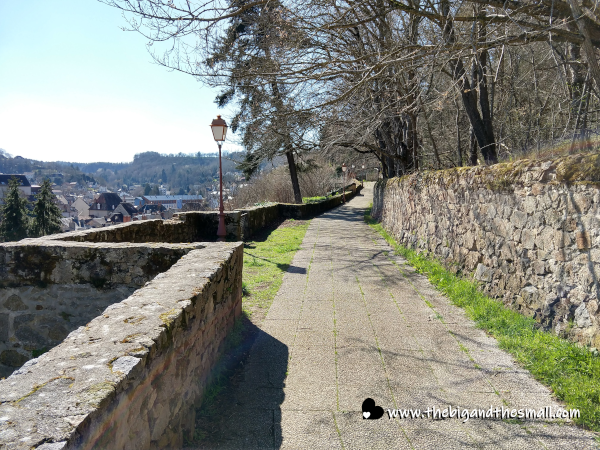 At one point we stumbled across a mini garden, that had a tiny labyrinth laid out in the hedges. I don't think it's ever intended to get bigger than it is right now, and it is so adorable. If you look closely in the next picture you can spot the little black and white cat who seems to have made his home among the hedges. 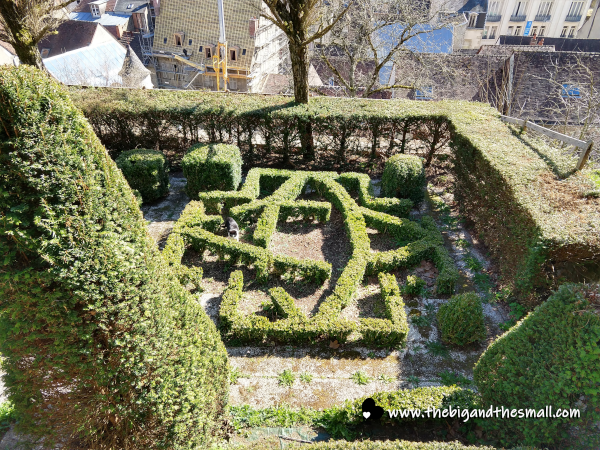 Suzanne shared some history of the town as we walked around, and again it sounded similar to some of the stories of small towns back home. As soon as youth are old enough they tend to move away to bigger towns or cities to find work. It is rare that someone comes back home to Aubusson. When there is no more family to take over a residence, it just gets abandoned, left to crumble, even in the middle of town. Suzanne said it's pretty much only the "crazy Brits" (her words) who move here and try to restore some of the homes. We passed so many places in various states of disrepair. This one no longer had a window so you could see right inside to all the damage. I wish I had the money to fix up places like this - how fun would that be! 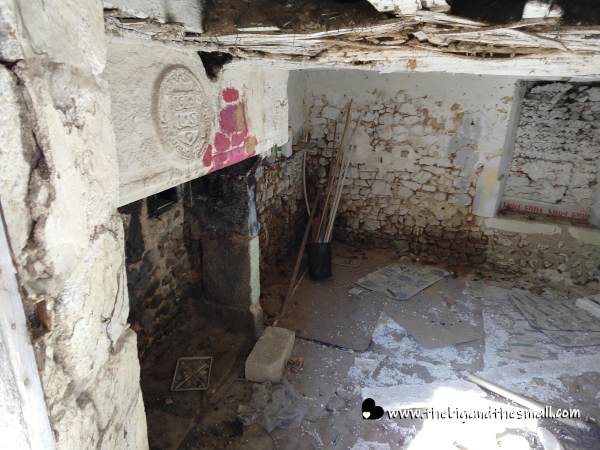 After walking down one large hill we walked up another and came across the local Catholic church. It is absolutely gigantic (especially for a town whose max population at one point was 7,000 and now sits around 3,500). The doors were open for anyone to walk inside, so we explored the sanctuary for a little while. 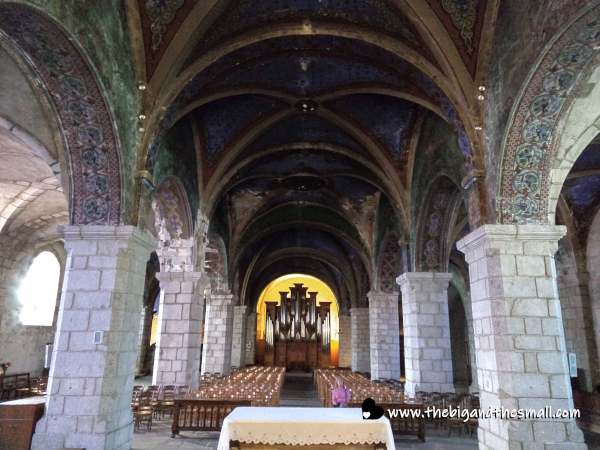 The day was getting long so gradually we made our way from the church back to Suzanne's home. With, of course, a stop at the local cinema after Joel spotted that one existed. They had several movies showing that we would like to see (including Captain Marvel!) but alas, none in the "Version Originale" - which means they would all be dubbed in French. Merde. When we got back to Suzanne's it was finally time to dig into the treat we purchased at the bakery. I almost didn't want to open it the packaging was so pretty! 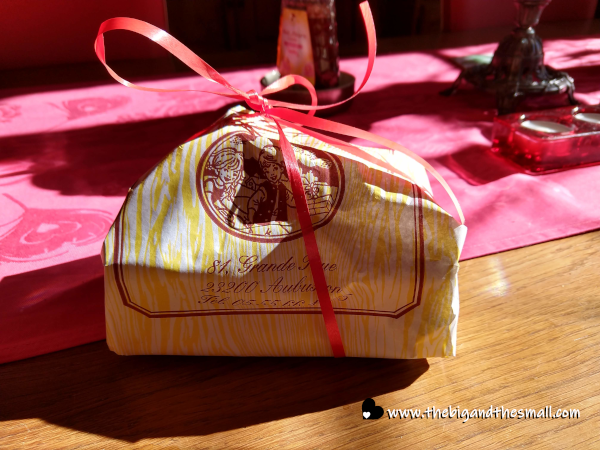 But I'm glad I did because this is what we bought. 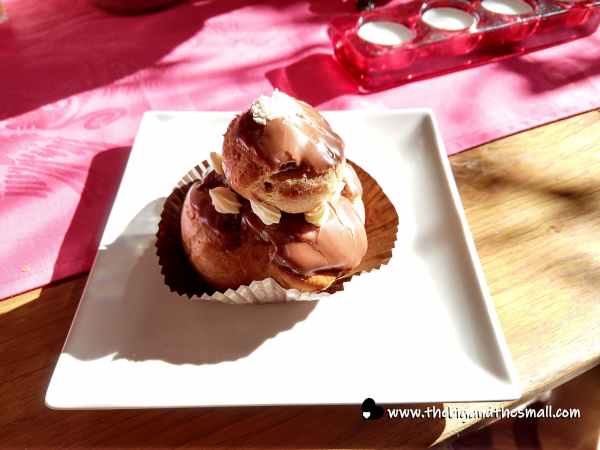 It was so delicious. Suzanne was making us dinner (quiche, salad, and chips (aka fries)) but I couldn't wait so we had dessert first. My grandmother used to always eat dessert first ("Just in case I die before dinner!" she would say) so I always think of her when I do this. The pastry was filled with the most amazing chocolate cream, it was all so light and airy and perfectly sweet without being sickeningly so. Be jealous. 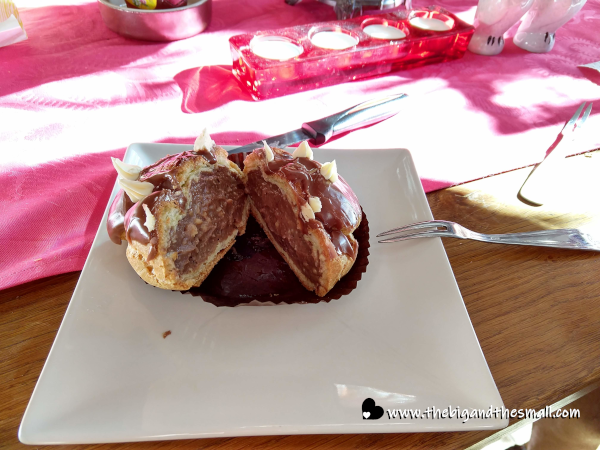 The rest of the evening passed in a wonderful blur of food, friendship, and political discussions. We discussed a lot of the differences between the US, the UK, and France when it comes to things like healthcare and gun control, it was really interesting. We definitely plan to go back to Aubusson sometime soon both to see Suzanne and to see what Aubusson is famous for - tapestries! There is a whole museum with some Lord of the Rings themed ones right now that we do not want to miss. Stay tuned!

So what do you think? If you had the money would you want to restore centuries-old homes in a small town in France? Or is there somewhere else you would rather be? Do you think those pastry options might push you over the edge? They almost have me ready to move here!