The Felletin Market in France

On Friday last week, we ventured out of our countryside hideaway to go visit our friend Suzanne in the town of Aubusson, about 40 minutes away from our housesit. We packed a lot of fun into one day so I'm going to share all about it piece by piece! The first thing we did after we arrived was hop in Suzanne's car to go to the next town over for the weekly market. 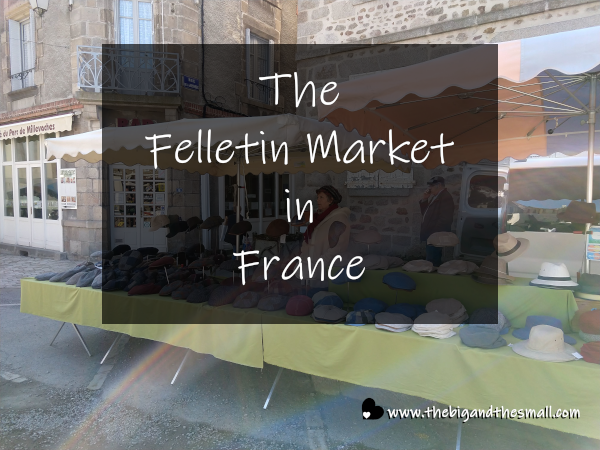 The day was absolutely perfect for wandering around outside, checking out all the stalls and vendors. The sun was shining and it was a perfect 65 degrees with a slight breeze. We've had a lot of cold and super windy days around here so this was a nice change. The market started out rather similar to one you might find anywhere across the US - the first stall we came to was all vegetables! We've been surprised at the high cost of produce here in France (compared to other places we've been like England and Cyprus), and the market was not cheaper than the grocery stores. We didn't get anything but Sue stocked up on potatoes, carrots, leeks, and turnips! 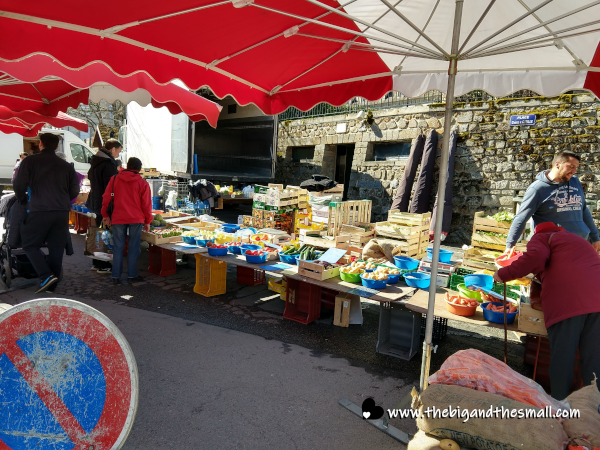 Right next to the veggies was something I've never personally seen at the market before - they had chickens for sale! I'm not talking the rotisserie kind (though that was just a few stalls down) I'm talking live, squawking chickens that you could pick up for about €12. (Ironically, the rotisserie chicken cost €14.50!) I suppose if you wanted to get a chicken so you could have eggs, or just wanted something fresh for dinner, here was the place to get it! 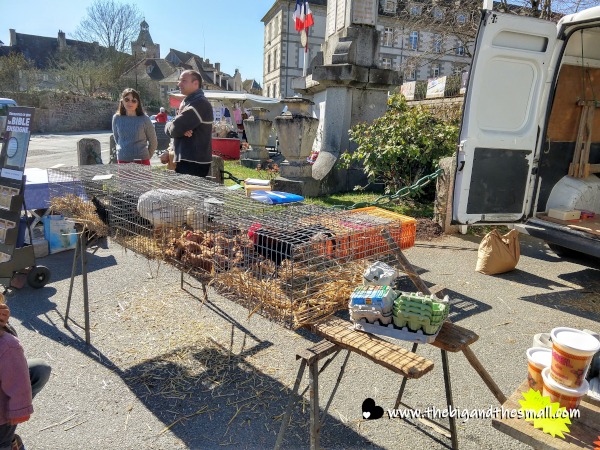 Some of the stands that were set up were quite impressive. There were multiples butchers with fresh cut meat, several bakers with some amazing looking bread, and then this one that had the most impressive array of olives I have ever seen. He had a few other things available but the majority of this display was olives in different marinades. 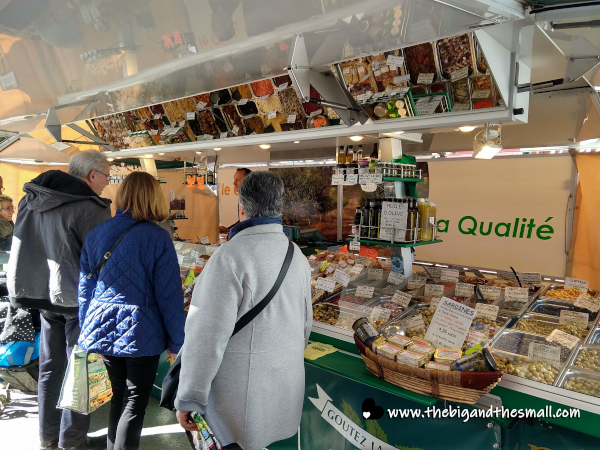 After all the food selections came the vendors with clothes and fabric for sale. I found it interesting that there were far more fabric vendors than ready-made clothes vendors. I wonder if that means that people in this area tend to make their own clothes? I'm not sure, but there sure were some cute fabrics available. 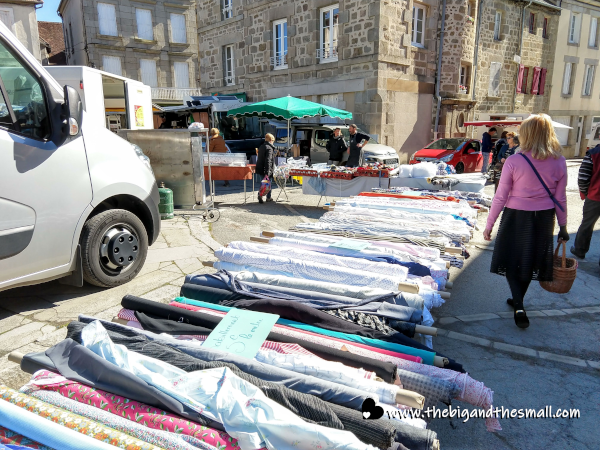 Besides the market, Sue had one place in town she really wanted to check out - a place called the Ressourcerie. I had been disappointed that there weren't charity shops in France (I fell in love with them in England) but it turns out they do exist, they just go by a different name! (Go figure - I should have been able to guess that one, lol.) 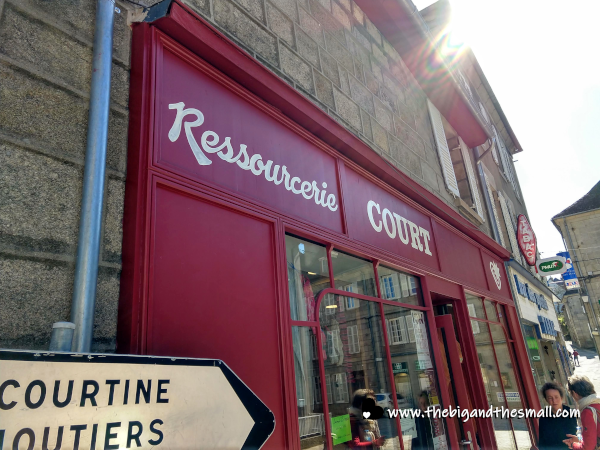 Sue was looking for one specific thing - some glasses tall enough that she could grow her avocado pits in them. She found plenty of those (for €.25 each!) and lots of other things - a rug, some cute little dolls, a book of stamps, and eventually I lost track of everything she was getting. Her home is a beautiful showcase of many treasures she has picked up over the years (don't worry I'll share pictures soon!) and it was fun to watch her collect more. While she shopped Joel and I wandered around the store as well. I was hoping to find an item of clothing I liked (so far I've picked up something in almost every country we've been to) but most of the clothes available were for children, men, or much smaller women than I. I did find this book on modern dance that made me flash back to my college years when I studied both Isadora Duncan and Twyla Tharp. 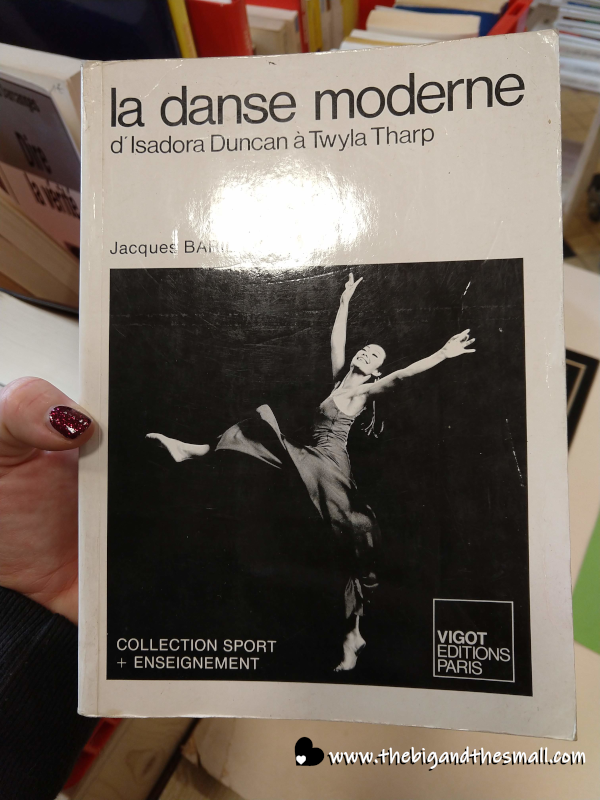 By the time we had finished our shopping and dropped off all of Sue's loot back at the car, we were all starving! There were so many food vendors around it was hard to choose which one to patronize. We decided to check out the one making savory Belgian waffles - they were topped with ham, cheese, and tomato. However, we had some communication issues, and by the time Sue got hers ordered (it was a bit extra complicated because she's vegetarian) the guy told us that was the last one he was making for the day.

It was all good, however, as earlier I had spotted a stand selling samosas that I really wanted to try. The market was starting to close up for the lunch hour (like everything does around here!) but we caught the lady just as she was loading the last of her stand into her van. She spoke just enough English for Joel to ask her if she had any remaining that she would sell us and luckily for us, she was willing to oblige. She opened the box with samosas, and Joel handed her a €10 and asked her to give us a mix of as many as we could get for that amount. As we were finishing up another couple came up behind us and also bought some, so we scored her some extra business!

I'm glad things turned out the way they did because those samosas were delicious. We had two that were a four cheese mix, one beef, one vegetarian, and my personal favorite, one that was spinach and ricotta. We split all of them together while we stood in the shade waiting for Sue as her waffle was still getting made. 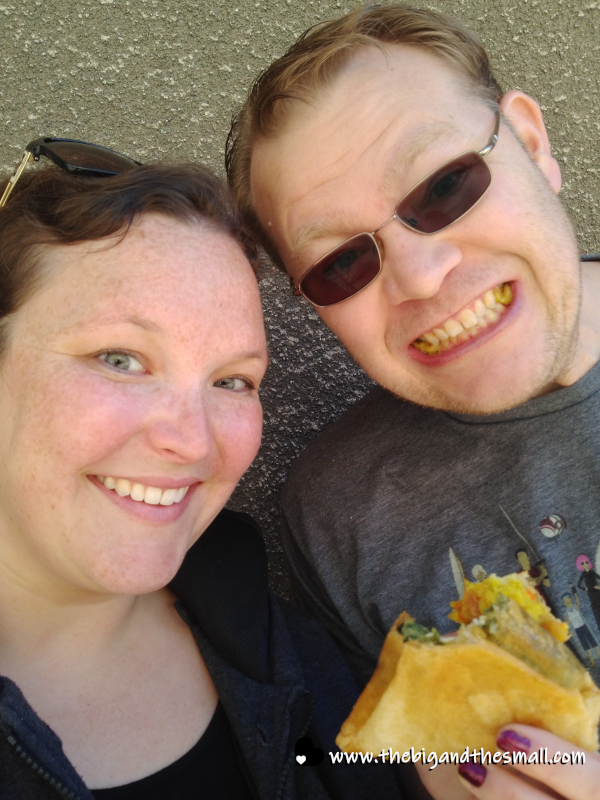 When we were done eating we spotted a place to sit down at one of the cafes so we grabbed it, then Sue joined us and ordered a beer and sparkling water. (I tried it, turns out I still don't like sparkling water.) We enjoyed chatting and resting for a while but we were in straight sunlight and even at only 65 degrees out at high noon that got hot. So shortly we were headed back to Sue's car and back to Aubusson to check out her home (which she also rents out as an Air BnB) and the town! I'll share more about that this week!

The market sounds really fun! Live chickens at the market really makes the picture of french countryside life look like the opening of "Little Town" that Belle sings in Beauty and the Beast.

I think Isadora Duncan was the first museum subject I researched for the CRMA as an intern, it was an exhibit of photography of her and her school that I was writing the blurbs and collecting information for. I'm pretty sure she would be on the list of 'modern dance 101 essential people.'  It's fun finding familiar within the new :)

Beauty and the Beast

I had not made the connection to Beauty and the Beast before but now that you mention it, I love it! I think the live action version is on Netflix, maybe we should watch it again soon.

How fun that you got to research and put together a display on Isadora Duncan! She is definitely essential, and it was really fun to spot that connection in the midst of all the unfamiliar.