For the first time since we moved to the UK last fall, being in France has me feeling like we are grocery shopping in a truly foreign country again. Cyprus definitely had us adjusting to a lot of differences, plus it was our first stop outside the US. Our next stop was Germany for only two weeks, and we pretty much lived on frozen pizza, cereal, tomatoes from our host's garden, and eggs from the chickens we were watching. The next almost six months we spent in the UK, which while different from the US, also has a lot of similarities. The only time we felt we were really missing out on food was when shopping for Thanksgiving dinner, and of course when we were craving some specific favorites from back home. 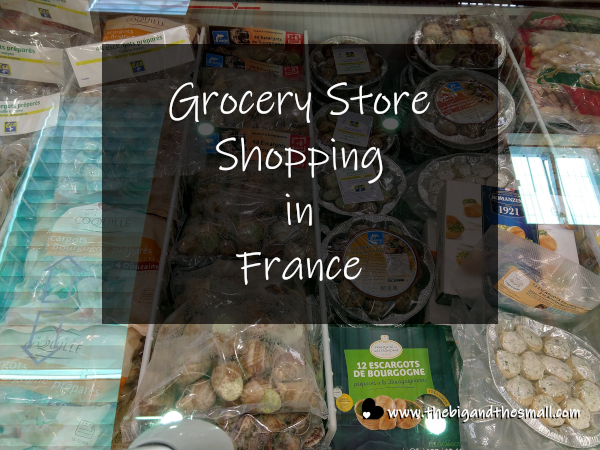 For the most part though, the UK felt like an extension of home, with some super awesome bonuses like macaroni pie, pasties, and haggis. France, however, definitely feels like a foreign country. Joel was super depressed after our first grocery trip because we couldn't find any peanut butter, and I am feeling lost because cheddar cheese does not exist here! Okay, to be fair, we did find some in one store (we've been to 4 different ones so far) but it was super expensive. After enjoying inexpensive yet delicious cheddar in England I just can't bring myself to pay these prices. And yes, I know France is supposed to be known for good cheese (believe me I was excited about it before we got here!) it turns out it's mostly variations of Brie and Camembert, which, while I enjoy them, aren't my favorite everyday cheeses.

So, settle in for a rant about some things that are very different about grocery shopping in France! I'll try not to sound too much like a spoiled American.

- Store times. You guys, this is a weird one (for us anyway). I mentioned in this post about Mountluçon that all of the little boutiques and shops close from 12:30-2:30 every day. While I find it adorable in a shopping district, I find it really annoying that the large grocery stores do it as well! We were on our way to Val's house yesterday and were supposed to bring dessert, but we walked into the grocery store right at 12:30 and got yelled at to leave because we had totally forgotten about this. It's so darn inconvenient! It would definitely take some getting used to if we lived here (how do you get anything done on your lunch break from work? Even the post office is closed for a chunk in the middle of the day!)

- Produce & meat are more expensive. We are always trying to improve our health through diet and exercise, and I have finally shifted us from a diet with a lot of pasta/carbs/processed foods to one focusing on lean meats/fruits/vegetables. Cyprus and the UK were really conducive to this kind of diet, and Germany probably would have been too but I got lazy for those two weeks (and the kitchen was hard to cook in). In France, I'm finding produce to be more expensive than anywhere we have been, and the same with our meat staples of chicken breast and ground beef! We are living on a budget so we've had to shift a bit in what we eat, and it's causing me to get more creative in the kitchen which I suppose is a good thing. At least eggs are still a cheap source of protein, and as for vegetables I'm learning to buy whatever is on sale and then figure out how to use it.

- Mayonnaise. It's probably a bit weird to have this as a whole category on its own, but Joel loves mayonnaise and it is weird here! There are a TON of options for mayonnaise. I mean, look at this section in one of the stores. 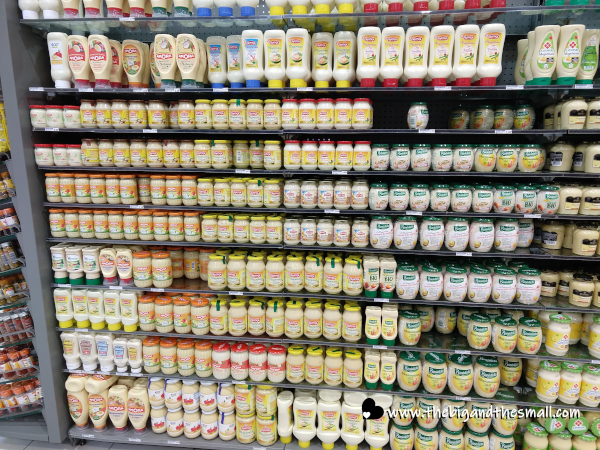 However, what's weird about it is that almost every single choice is not just plain mayonnaise, but a mix of mayo and dijon mustard. Literally, in that whole shelf, there was only one kind that wasn't a mix of mayo and mustard, and it was the Heinz brand marketed as American style mayo. I actually don't mind this French style of mixing mayo and mustard, but Joel is not a huge fan of dijon so it kind of ruins the whole thing for him.

- Snails, snails, everywhere. One thing I do love about shopping in new countries is learning what the locals like, and clearly the French like their snails. I have literally never seen them in a grocery store before, but here they are everywhere! Flavored ones, unflavored ones, pre-cooked, raw, you'll find them all. I do plan to try snails at some point during our time here, but I think I want my first encounter to be at a restaurant where I know they are cooked properly, rather than my own attempt from a grocery store. 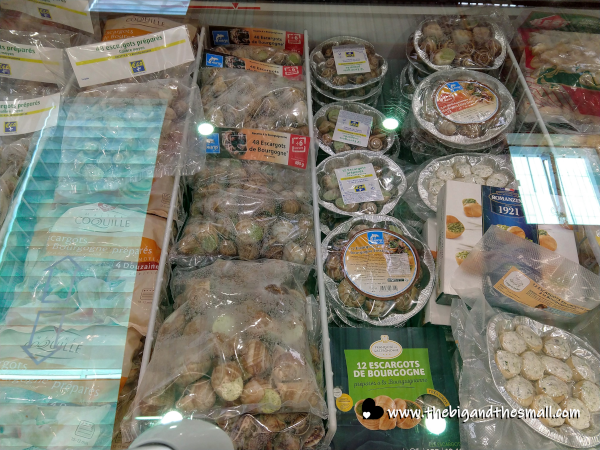 - There are things we like/love. Giant pros so far of grocery shopping in France? Croissants, duh. They are super cheap and super tasty, and we love pairing them with our giant bottle of Nutella we bought thinking it would work as a substitute for peanut butter. (It doesn't but is delicious in its own right.) Chicken cordon bleu - everywhere has it pre-prepared, it's less expensive than regular chicken breasts (go figure!) and it's so good! Not the healthiest option in the world since it adds ham, cheese, and breading to chicken, but I'm not mad at it. Crepes - another cheap frozen food option is ham and cheese crepes - I swear to buy the ingredients to make these would be cost prohibitive but you can pick up a box of 20 frozen ones for almost nothing!

Moving from the UK to France has definitely been an adjustment in a lot of ways, and nowhere brings it into sharper relief than the grocery store. We followed our own tips for shopping in a new country and still spent the first couple of trips feeling really discombobulated. We are starting to get in the groove and finding the things that work for us in France, but I think we can safely say it's not our favorite.

What do you think about grocery shopping in France? Would you be brave enough to try snails on your own? Have you ever been somewhere and tried something super out of your comfort zone? Dish below!