Fixing Up Our French Bikes

When we first chatted with Bob about coming to do this housesit, we were excited when he mentioned that he had two bikes that we could use. He told us they hadn't been used for a long time so we might have to fix them up, but we were welcome to it if we wanted to do the work. 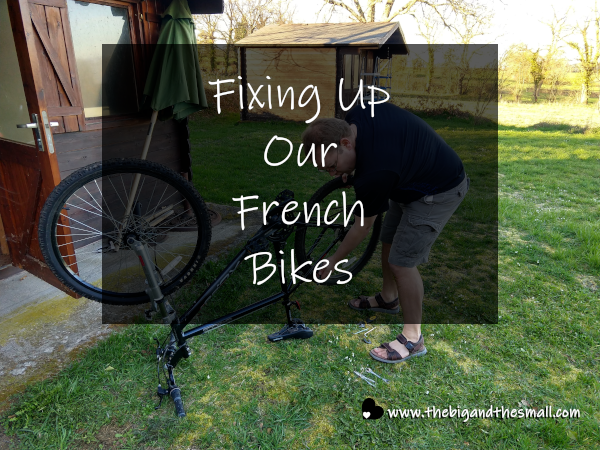 Turns out that before we arrived Bob decided to try and fix them up for us, which was really sweet. He even ended up buying two bike pumps because the first one broke after pumping up only two tires. But then....when he was pumping up the last tire, he said it got a hole in it so he wasn't able to get that done. 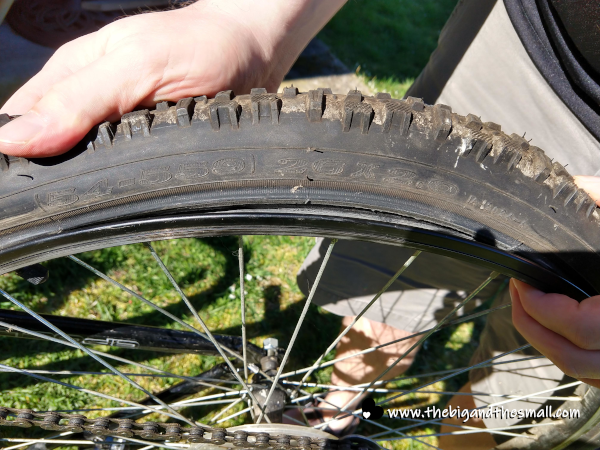 So now it was indeed up to us to get the bike fixed if we wanted to use it. Having another mode of transportation out here (one that makes us exercise, to boot!) was a no brainer for us, so we decided to tackle the challenge. We debated back and forth on whether or not we would try to go to a French bike shop or fix it ourselves. Each presented its own challenges, but in the end, we decided to go the do it yourself route. We found the innertube we needed at the local grocery store for only €3.60 for two of them! Then it was time to figure out just what the heck we needed to do. 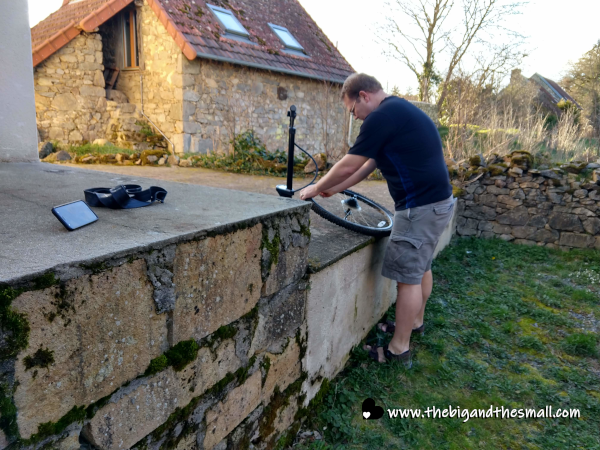 Time for YouTube to the rescue! Seriously, you can learn how to do pretty much anything on YouTube. Joel found a video that walked us through how to take everything apart and then get it all back together and working again. We didn't have all the right tools so we had to improvise a little bit with some tools we found lying around the barn. [Sidenote: I say "we" but let's be honest, Joel was doing all the work.] 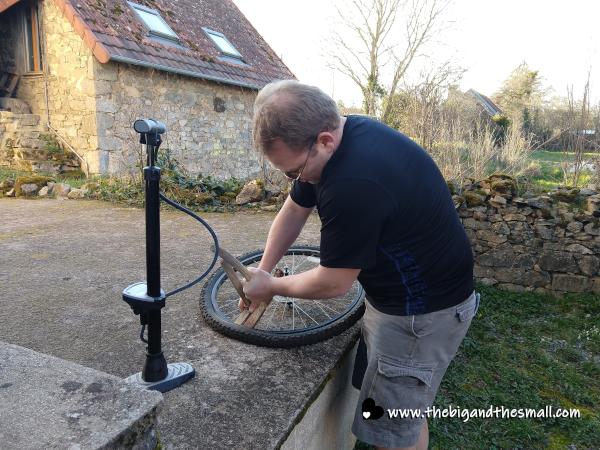 Luckily those worked just well enough to get the tire separated from the inner tube and the rim. The tube didn't just have a hole in it as Bob thought - it was completely burst! Our best guess is that he got a little too enthusiastic when pumping it with air. We were very careful pumping up the new one, we didn't want to make the same mistake. 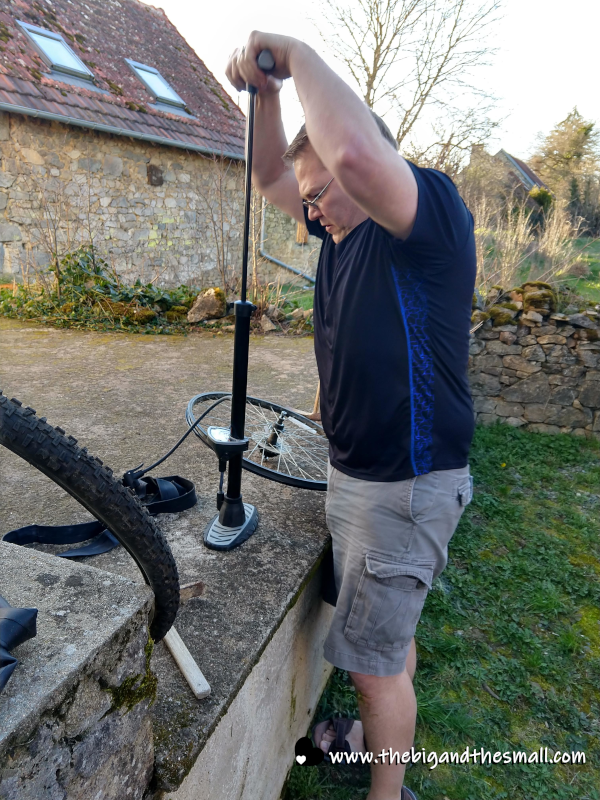 Then it was time to fit the tube back inside the tire! Am I the only one that didn't know this is how bike tires worked? I definitely thought tires were just tires, I didn't realize the inner tubes were separate. 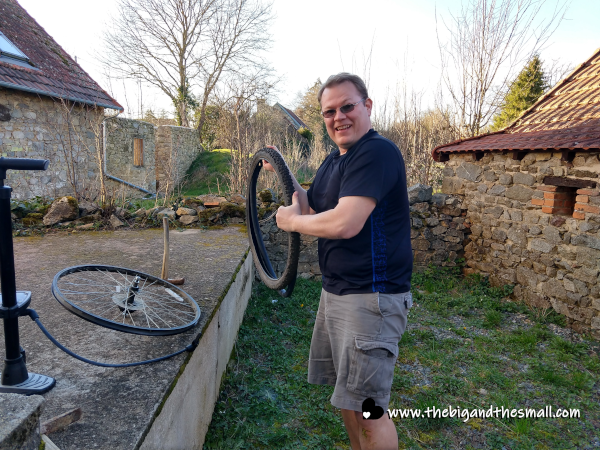 All that was really pretty easy, the real trick was getting it all put back on the bike. The video didn't walk us through that part, so Joel had to remember exactly how he took it apart and put it back together reversing the steps. I played assistant, holding various items and handing tools over when necessary, like a nurse while the doctor performs surgery. 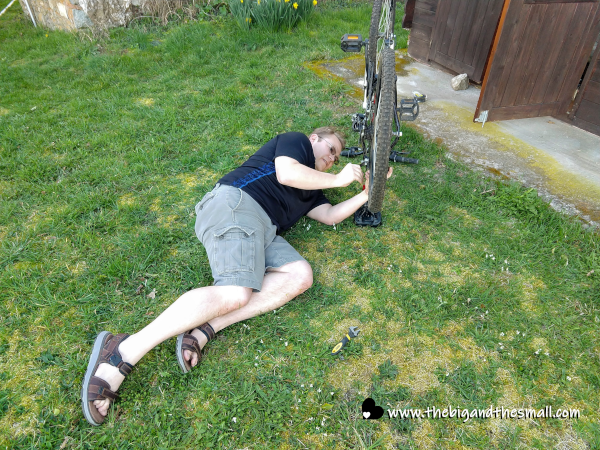 After about a total of 2 hours of work (including driving to the store and back), the bike was all set and ready to go! Even though the sun was about to set we decided to head out for a quick spin, anyway. We rode about a mile away - we were aiming for a church in a small town that we can see from our deck, but the road came to a dead end before we got there. Ah well, we'll try again another day! 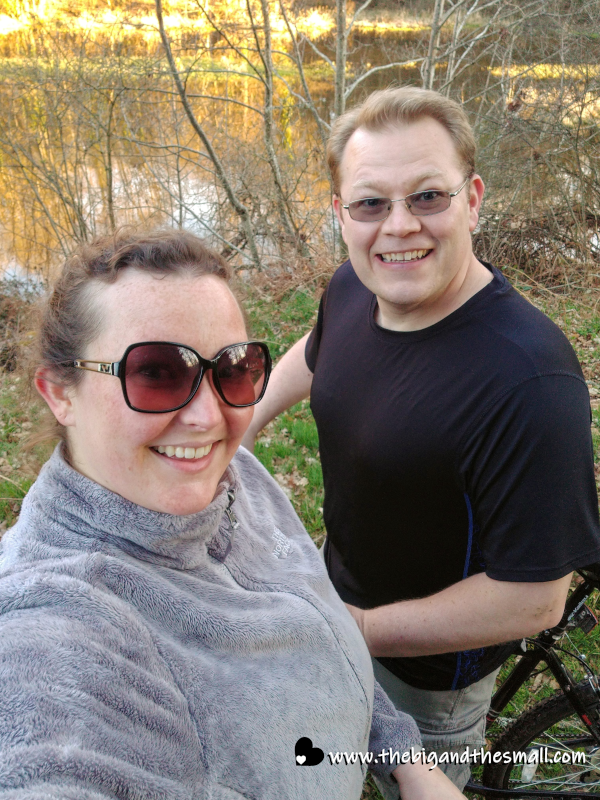 The weather hasn't been really great for bike rides since we got them fixed up, so we haven't ventured too far out yet. The temperature isn't too bad - it's hovering in the low 50's right now - but the wind has been really extreme! I'm looking forward to spring really arriving so we can get out and about on the bikes even more.