Girls Day Out in France

Last Friday I was invited to spend the day out with Val - going to a coffee morning, having lunch at a local restaurant, and doing some shopping. Getting out of the house sounded lovely (we are quite rural around here) so I enthusiastically said yes! 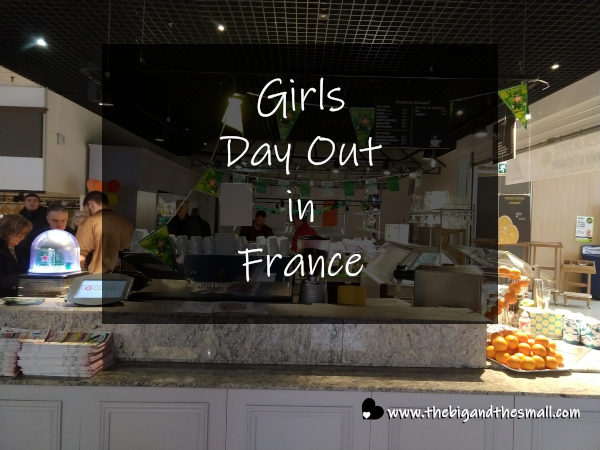 The morning started by Joel driving me about 9km to the nearest bigger town to meet up with Val. We were nervous about doing this since it required Joel to then drive home by himself, but we decided to give it a shot. Our rule in England was that Joel was not allowed to drive by himself, because he needed constant reminders to stay on the left side of the road. Here in France, they drive on the right side of the road, but we are driving an English car so it's still a bit confusing! I was very relieved when Joel texted to let me know he had made it home okay.

By that time Val, her friend Linda, and I had made it to the coffee morning in another small French town about a half an hour away. We were meeting up with a group of British ex-pats who meet weekly in various small towns around the area. There were both men and women at this event, though we made sure to sit at separate tables like a junior high dance. I got flustered when it was time to order so I just said I would have the same as Val and Linda, thankfully Val caught that and ordered milk for me, since they were getting their coffees black. Each coffee came with one sugar packet and Val and Linda gave me theirs which just about made the coffee drinkable for me. I always say I don't really like coffee, I like milk and sugar with just a hint of coffee (which is why I try not to drink it too often!) 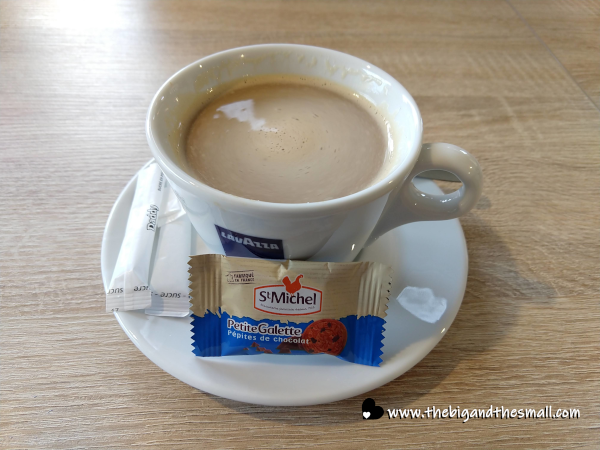 The coffee shop we were meeting in was attached to a small convenience store, and honestly, it could have felt like any similar establishment back in the States except for one thing. There was a bird! Like, just off to the side was a giant birdcage, and the door was kept open so the bird could come and go as he pleased. The regulars at the coffee morning seemed to know the bird well, and at one point he came over and sat on Val's arm for a bit. 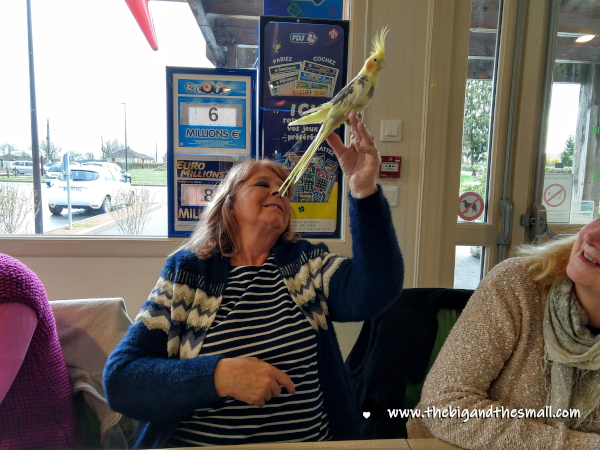 It was kind of awesome, but definitely something I don't think I'd ever see back home. Too many health code violations with that one. The conversation at the coffee morning was lovely, ranging from the movie we had seen the night before, to politics (Brexit and Trump, of course), to discussing the local area - what there is to do and why so many Brits moved here (cheap property prices, mostly).

Around 11:30 the crowd started winding down so Val, Linda, and I headed out for lunch. We went to Guéret, and actually ended up at a restaurant right next to the McDonald's we ate at when we first arrived. The place was called Crescendo, and is one of those buffet style places where you pay by the plate. We all decided to choose from the salad bar, and for only €3.95 I was able to fill up this plate with all sorts of goodies! From the top left going clockwise was a cauliflower salad, couscous with veggies and raisins, a type of pasta salad with ham and cheese, and a cucumber/tomato/feta salad, then the hard-boiled egg in the middle. It was all quite delicious, especially towards the end when I just mixed it all together into one super salad. 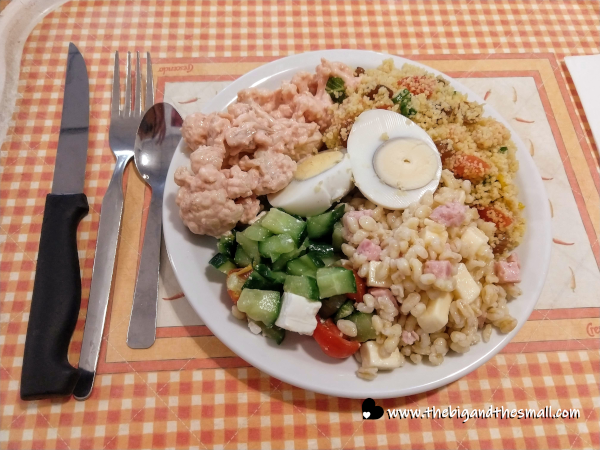 When we were all sufficiently full we headed out for some shopping! Linda and Val had some specific errands to run, and I was more than happy to tag along. The first place we stopped was a place called Noz - it kind of reminded me of a TJ Maxx or a Tuesday Morning. It's one of those places that gets the "overflow" or leftovers from other places - so you can find everything at a discount, but you are never quite sure what you are going to find. 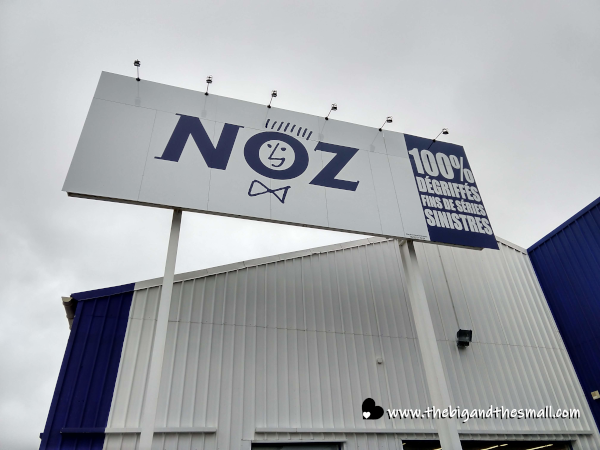 I wandered around the store trying to find the weirdest things that I could. There were some interesting outfits, some really strange shoes, and random bits of holiday decorations. The thing that made me laugh the most was this Christmas tree. I'm not really sure what kind of decoration it is supposed to be - what are you supposed to hang on the hooks? Why does it say both "God" and "Let it Snow" - is it some kind of prayer. All around just one of those things that makes you wonder... 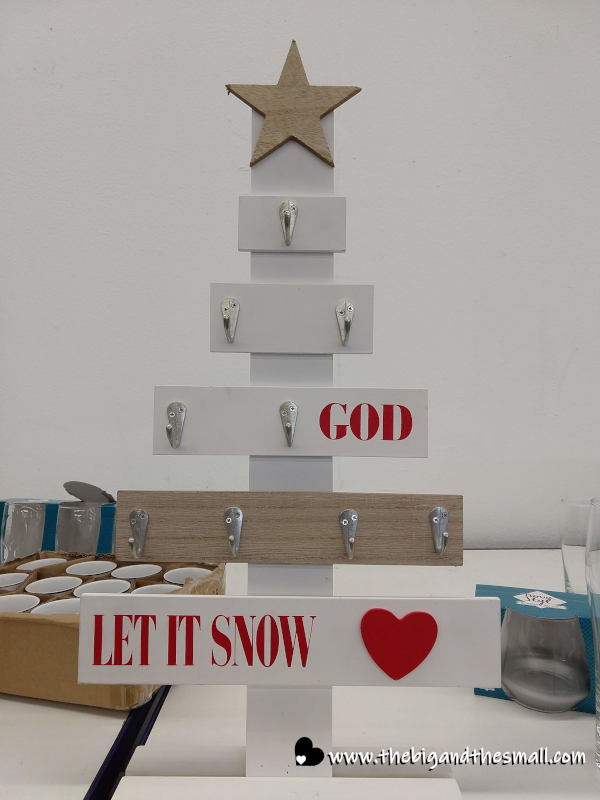 There was a whole food section as well with frozen foods and lots of packaged foods. They even had oreo thins! I was most intrigued by this devilish chocolate... 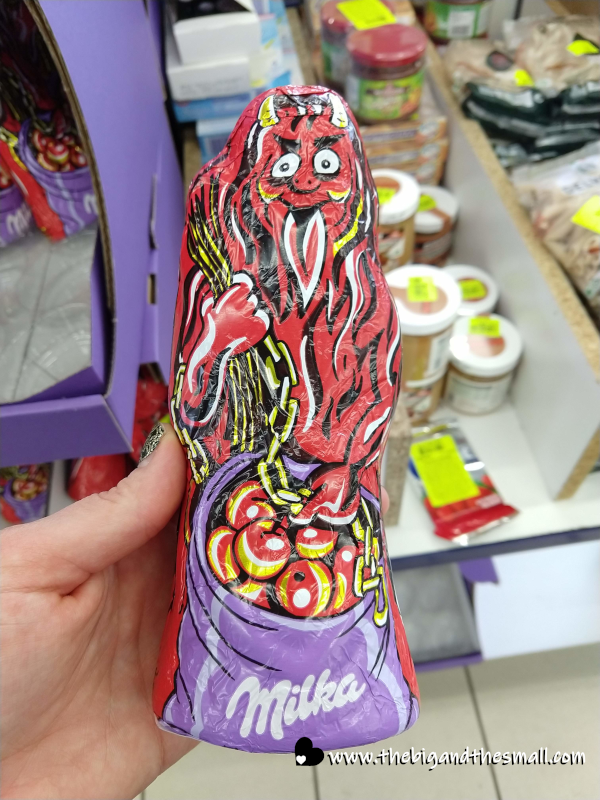 I didn't end up buying anything at this store, though I'm kind of regretting passing up the fuzzy slippers that were only €2. They sure would come in handy around this drafty farmhouse! We went to about 3 other stores as well, most of them variations of this one containing all sorts of random things. I ended up buying a dish drying rack and a peeler, as the ones provided in our current kitchen were not quite up to scratch. It all cost less than €3 and has already made things easier, so well worth it.

It was a fun day out, even if it was rather gloomy weather-wise. I enjoyed spending time with the ladies and doing random shopping that I never get to do with Joel. We have plans to spend more time with Val again - she loves movies almost as much as we do - so you'll be hearing more about her soon, I'm sure.

When Iowa City got its first Tuesday Morning, my mom and I decided to call it "Captain Random" instead, and so everytime I hear about someone going to a Tuesday Morning, I think, oh, you're going to visit Captain Random. I always enjoy those types of stores but rarely buy much of anything, but since you never know what you are going to find, it is always fun to look. I really enjoyed pondering that "God... Let it snow" hook display with you... is it an ornament display? Is it for mittens? Is it a prayer? lol. So funny. Glad you got to have some girl time, it sounds fun. Side thought: a Cafe au lait is always a solid (and usually inexpensive) coffee selection in France for the less inclined to drink it black crowd.

That is the best name for those kinds of stores ever, I love it! And that hook tree, right? So strange, so fun to ponder.

Good to know about cafe au lait, I will keep that in my back pocket for the next time we go out!