Our French Kitchen: Before & After

One of the toughest things, for me, about housesitting has been cooking in other people's kitchens. Now don't get me wrong, we have stayed in some great places with some very nice kitchens. However, if you have ever cooked in someone else's kitchen you know how annoying it can be - you don't know where anything is, once you find things they aren't arranged how you would arrange them, maybe the knives aren't as sharp as you would like or they don't have as many baking dishes as you need. When it's a one-off here and there it's not so bad; when it's a lifestyle, well, it takes some getting used to. 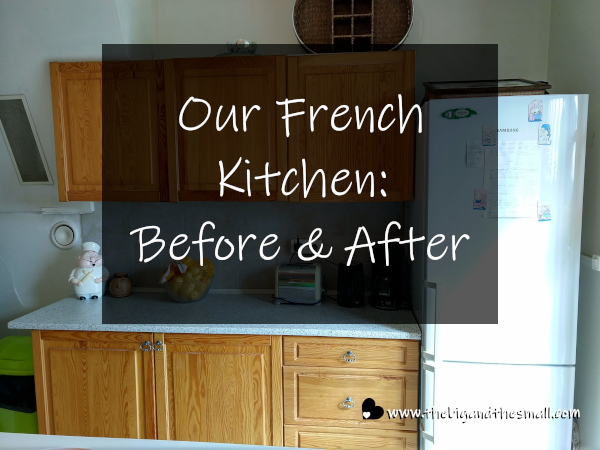 I have made it work at all of our other housesits, trying to rearrange as little as possible, and when I have moved things around making sure to return things to exactly where they were before our hosts return. But I was over the moon excited when our host here, Bob, said that we could rearrange the kitchen if we wanted to. If I want to? Heck yes, that's what I'm going to do! I have been itching to KonMari something all year (ever since her Netflix show came out and reminded me yet again how much I love her) and while I knew I couldn't give Bob's kitchen the whole treatment (we can't actually get rid of anything), it is better than nothing.

The kitchen started as a pretty classic example of a kitchen owned by a bachelor who doesn't really cook. It was serviceable enough to make a good cup of tea or some porridge, but not set up for any actual cooking. When we looked through the cupboards we couldn't find any real organizational pattern - pantry foods were scattered in three different places, almost every cupboard had stemware in it, and it was all just a jumbled mess. Plus the cupboards were so full that the counters were stocked with bigger devices like a crockpot and a George Foreman grill.

The first thing we did to tackle all of this was to take absolutely everything out of the cupboards, wipe down the cupboards, and then figure out a game plan about how to organize everything. Bob also told us to go ahead and eat through any food he has on hand in the pantry and the freezer, so I'm going to get creative about how to use up some ingredients I wouldn't normally have on hand. (If you have any recipe suggestions for chickpeas or canned rhubarb you let me know!) 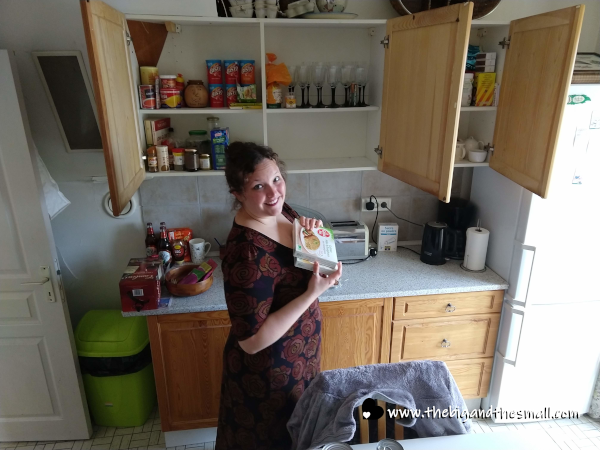 I thought I had taken a decent amount of "before" pictures but when I went to create this post I found myself wishing I had more. Ah well, you'll get what you get I suppose! Here is a before of Joel tackling the cupboards on one side of the kitchen. You can see all the stuff on the counter behind him, a set of wine glasses right next to pantry staples, and all the egg cartons on top (those are saved to use as fire starters). 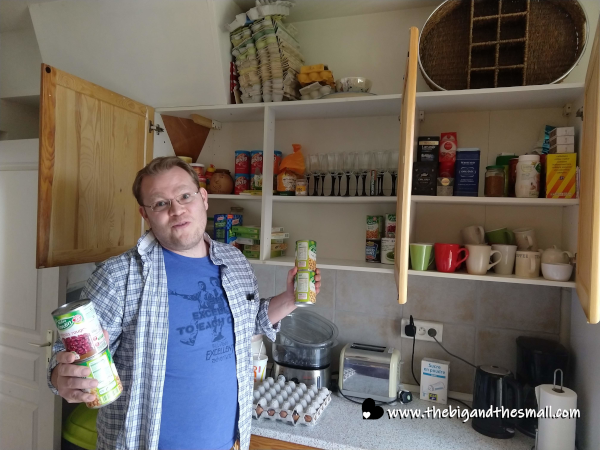 And now the after! You can see that we cleared the counters of everything except stuff we'll use often, got all the food put into one place with no dishes or stemware around, and even cleared off the top. I was especially excited when I found a pretty bowl to hold the potatoes. 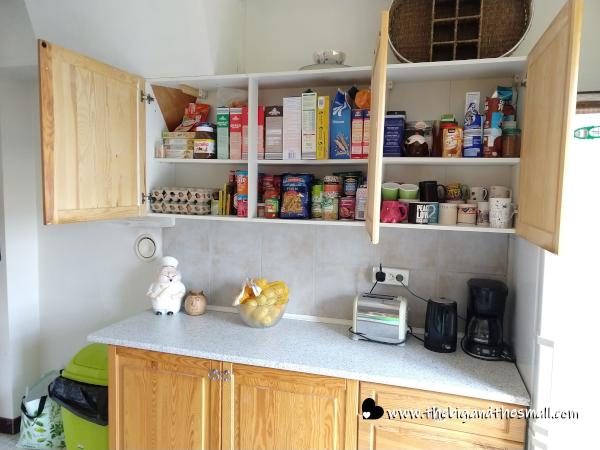 Here is a "before" of the other side of the kitchen - and I swear this was before we started doing anything - there really was that much stuff on the counter when we started. 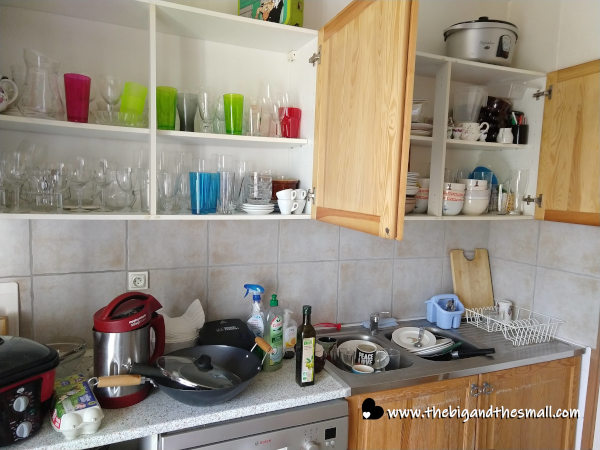 And now the after! The cupboards are much neater, and rather than a random hodgepodge of kitchen stuff all we have on the counter are cutting boards, a trivet (that I found stashed in a cupboard with a leg missing so we repaired it) and a crock with cooking utensils. I even created a spice area in the cupboard right next to the stove for ease in cooking. 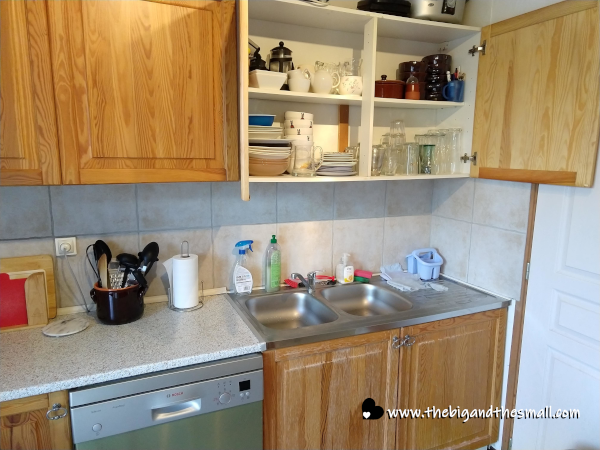 One of my favorite things we did was put two bowls for holding fruit and veggies in the center of the kitchen table. Now, whenever we are feeling snacky and we walk in there the first options we see are healthy things, which will hopefully encourage us to eat them more! (I actually stole this idea from Bob, he was already using one of them to hold pears before he left). 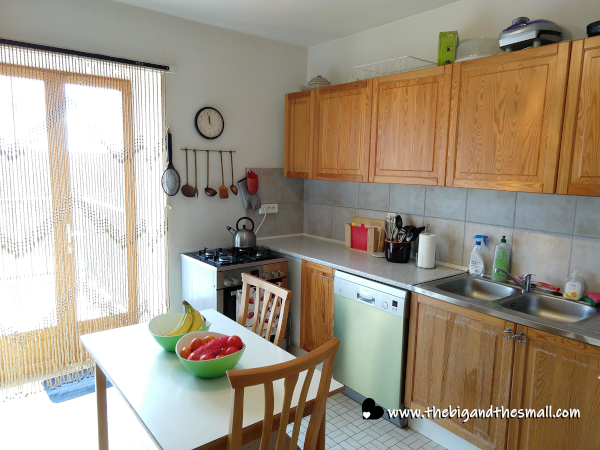 I love, love, love cooking in this kitchen now. It feels so good to have things in the right place, where they are convenient to use and to have things grouped with like items. Bob mentioned that the last housesitters he had (who were Australian) also rearranged the kitchen, but that all this time later he still hasn't found some of the things they put away for him! I'm planning to give Bob a tour of the kitchen when he gets back so he knows exactly where everything is. Hopefully, he will like what we've done with the place, I know I sure do!

What do you think? Have you spent time cooking in kitchens that don't belong to you? Do you love it or hate it? If you had the chance to rearrange someone's kitchen would you do so or forgo all the work? Let's hear it!