The day after we arrived in France was a Sunday, and while normally that means I would be looking for a church to attend, I decided to ease into that here. Plus, our host, Bob, had already made some plans for us with a friend of his, Val. He had actually invited her over to lunch at his place to introduce us (she'll be a good in-country contact for us if we need help with anything) but since Val knew that Bob doesn't cook, she offered to have us over for lunch instead. 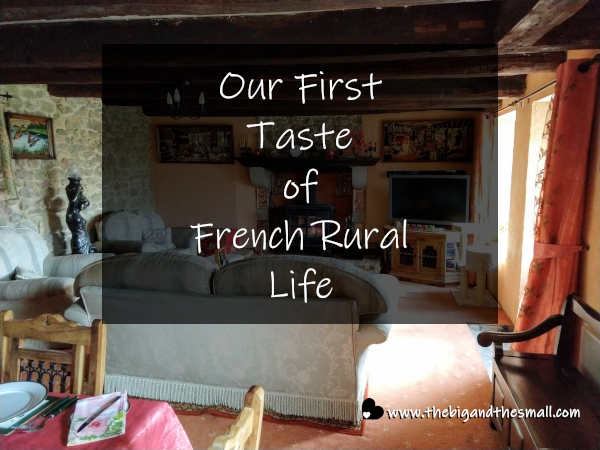 Smart lady. And generous! Since Bob's car had unexpectedly broken down she ended up cooking for us, driving to pick us up at Bob's, feeding us and entertaining us for hours, then driving us back home to Bob's! She picked us up around 11:30, and we arrived at her place around noon. As soon as we walked in the door the smell of the food was incredible, I felt like I had just walked into a nice restaurant! Her kitchen was large and open and really felt like an old fashioned French kitchen. I suppose I don't really know what that is, but let's just say this place felt right. 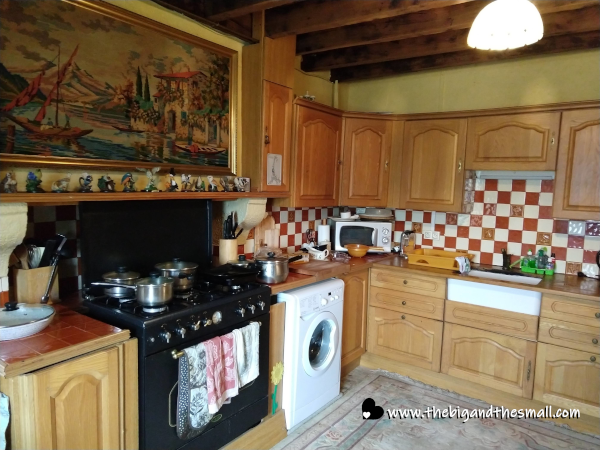 Turning to the right from the kitchen meant entering Val's large open room that is divided into a dining room and a living room. Bob kept teasing Val about being "posh" (upscale in British) and she would deny it, but I'm pretty sure this table setting qualifies as posh! At least in my book. 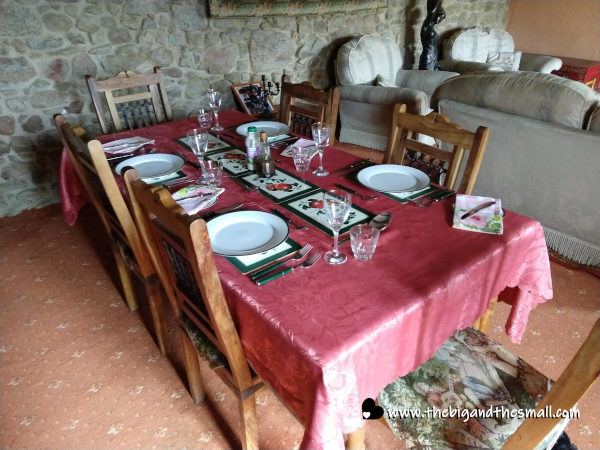 Val had some things to finish up in the kitchen and despite my multiple offers to help she insisted that we sit and relax in the living room. Before I knew it a glass of sparkling wine was in my hand and I was curled up all cozy by the fire. I was not going to argue with that. Joel, Bob and I all sat together and enjoyed some conversation while the smells from the kitchen kept getting more and more tantalizing. Joel and I hadn't eaten yet for the day so we were quite hungry, but it turned out to be a good thing because we were about to get served so. much. food! 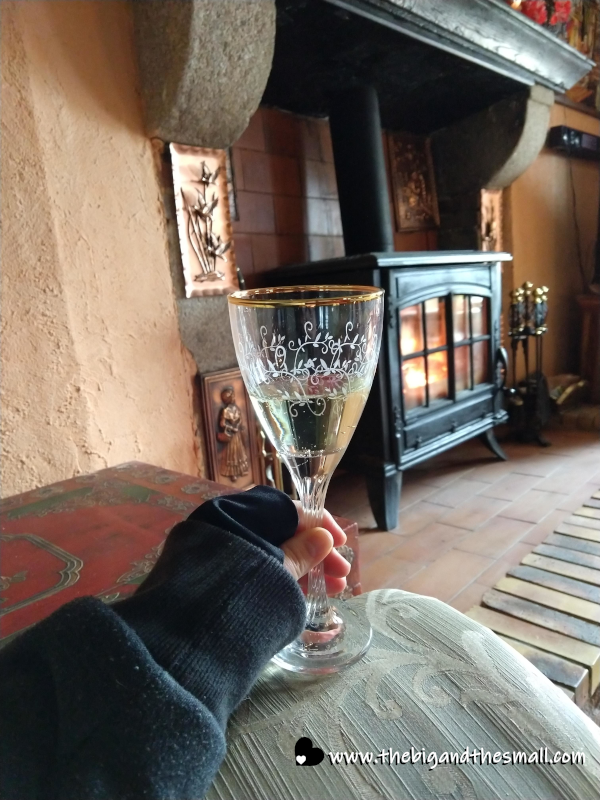 Finally, everything was deemed ready and we were called to sit at the table where more wine was poured and the food was served! First up was a "starter" which consisted of a salad with tomatoes and balsamic, as well as a puff pastry with ham and cheese for me, seafood for the guys. (Everyone we have stayed with so far has asked for dietary preferences before we arrive, so I am able to share my aversion to fish/seafood. Other than that I'm not very picky!) 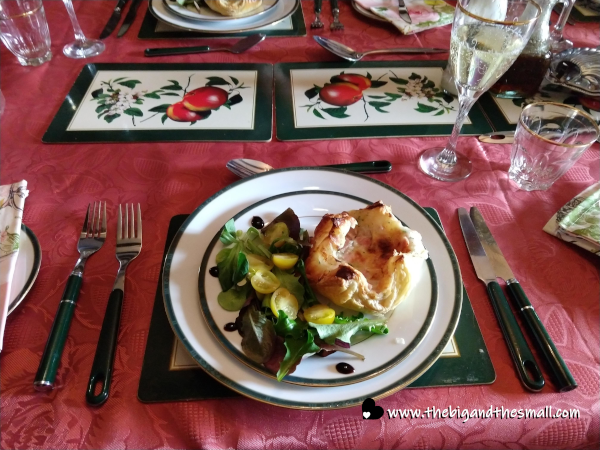 As soon as we were done with the starter Val whisked our plates away and started bringing out the main meal. The meat dish was a slow roasted lamb that was so incredibly tender it almost melted in my mouth. She said she had to go to three different stores to find this lamb, and then slow cooked it for over seven hours! We also had dauphinoise potatoes, cauliflower baked in cheese sauce (hands down my favorite thing on the table), roasted parsnips, carrots, green beans, and gravy. Technically this meal is more British than French, but we ate it French style - slow and lingering with plenty of conversation and laughter. 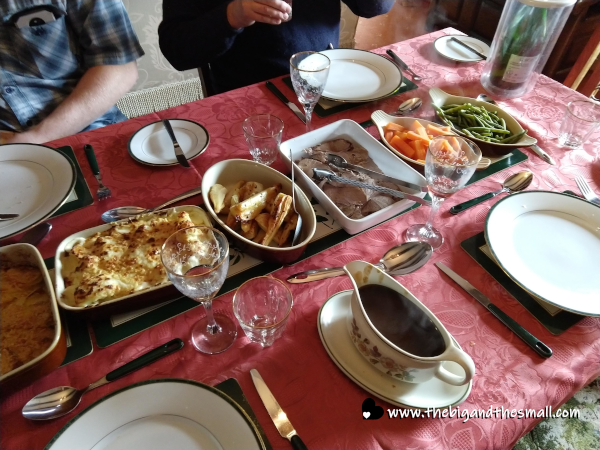 Just when I thought I couldn't eat another bite, Val announced that there was dessert! And not just one dessert, no we had a sweet dessert - cheesecake and then a very French dessert - a cheese plate with baguette and homemade (by Val) wheat bread. You better believe I dug down deep and made some room for that cheese and bread. (Side note: I'm so glad I'm eating carbs again) 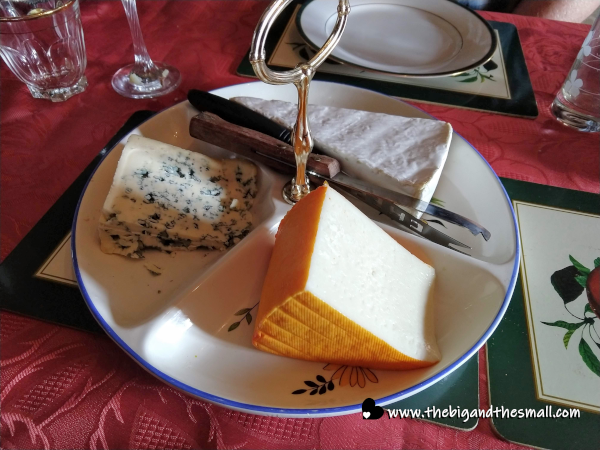 I also made room for the tiniest sliver of cheesecake and fresh strawberries. The crust was delicious (even though Val apologized that she had to use "rubbish French cookies" instead of what she would normally use) and the filling was light, creamy, and the perfect amount of sweet. I really wish I could have eaten more but I was so beyond full. 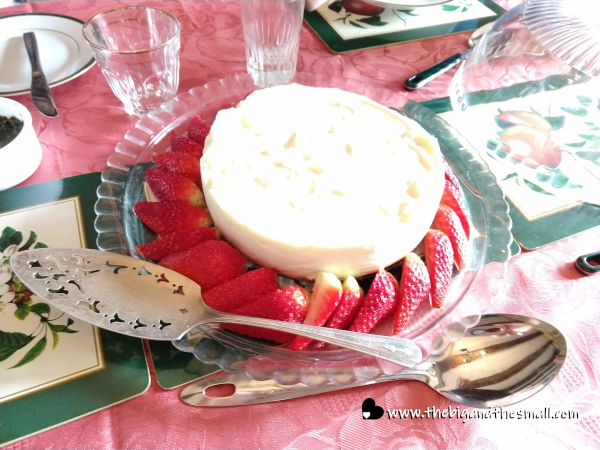 We made sure to tell Bob he wasn't going to have to feed us again that day - I was barely hungry again by breakfast the next day! During our meal, we chatted a lot about standard getting to know you topics, politics (people always ask us about Trump!) and what life is like in the French countryside and why Bob and Val chose to move here. Their main motivation is that the cost of living is cheaper here than most of the UK - especially property prices.

Val's place is actually quite interesting. It is a "barn conversion" which means she took an old barn and turned it into a house. It is quite lovely as you can see from the pictures, and I wish I had grabbed some pictures of her garden and the outdoors because it was even more stunning. But it does have a few downsides - for example, the bathroom. Her toilet is a composting toilet, which I think is really just a fancier porta-potty. When we got a tour of the house she showed us how to use and it was kind of complicated - several different levers to push in the right order to make sure things went down correctly. I decided I just wouldn't use the bathroom at all, a choice I regretted later after all that food and two glasses of wine. (I did survive till we got home, though!)

Bob shared with us a bit about the area we are in - the Creuse area of France. It is commonly known to be the least populated area not just in France, but all of Europe! He and Val (and Sue from the other day) all bought property and moved here about 10-12 years ago, and unfortunately, since then property prices have dropped even more. Often now when a building becomes unoccupied because someone passed away and the family doesn't live nearby, people won't even try to sell, they just let the place sit empty until it falls down. It makes me sad to think about these neat old places going into such disrepair! But Bob said from his experience with his own place he can see why people do it - getting construction work done is very hard (not many people to work) and expensive, and in the end, the property just isn't worth it.

On the drive home, armed with this new information, I noticed more of what Bob was talking about, spotting some crumbling buildings I hadn't seen before. Strangely they don't really mar the landscape as much as I would have thought, instead it feels like they are simply returning to nature as vines and branches and other growing greenery slowly take them over. I'll have to see if I can grab a picture of the next one I see.

The pace of life is definitely slower here, and I think it's something I will appreciate (for a few months at least). We were so grateful to Val for such an incredible welcome meal, and I'm kind of hoping that before we leave I'll be able to invite her over here and return the favor. Probably with nothing quite so elaborate though, I don't think I've ever made a three-course meal in my life!