McDonald's Around the World: Guéret, France

When we landed in France our British host (Bob) picked us up, and on the way to his house, offered to stop somewhere for dinner. He, very sweetly, has been trying to cater to us as Americans (he pulled out an old coffee maker and cleaned for us! [too bad we are some of the few Americans who don't live on coffee]) so he suggested we stop at the only McDonald's in the area. Normally we might have passed for trying something more local but we figured, hey, why not? At least we can write about it for the blog! 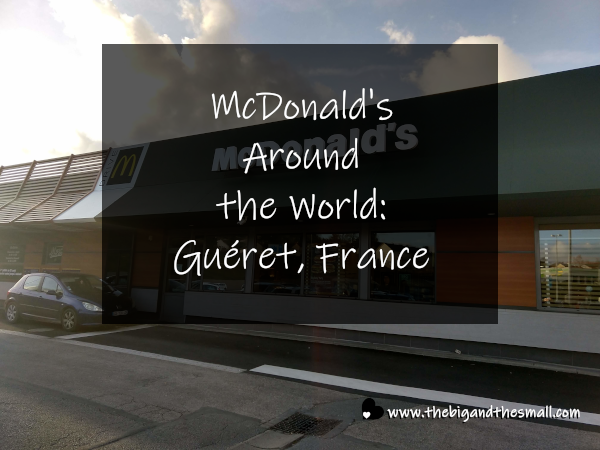 Thus how we ended up eating at McDonald's in fairly small town France (Guéret as a population of about 13,000). The last time we ate at McDonald's in France was in Paris, so we figured this one might be a bit different. One big difference right away was that this McDonald's had an outdoor space - complete with child play place! It looked like a neat play area, similar to one you might find in the States, although in our experience those are usually indoors. 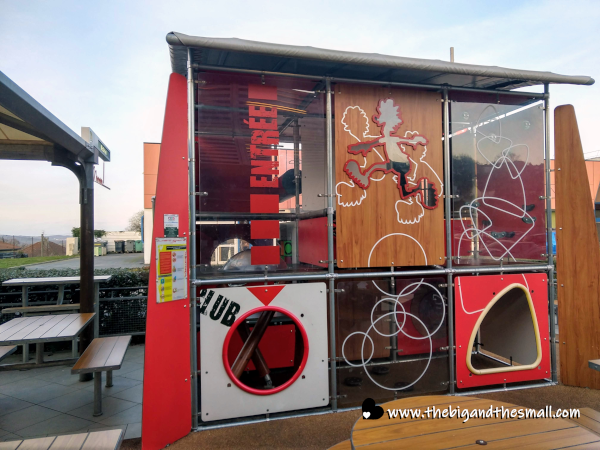 The interior of the restaurant actually looked pretty familiar - I think you could plop this one down pretty much anywhere in America as one of the newer and more modern McDonald's they build these days and it would fit right in. Seating options were mixed between barstools, tables, and booths.

Like every McDonald's we have been to in Europe so far, ordering took place at a kiosk. Especially in a foreign country this makes eating here so easy as you don't have any language barrier at all. In fact, we never had to communicate with anyone if we didn't want to! I suppose this could be a negative, too, if you are trying to learn or practice a language, but when you are tired and hungry it's nice not to have to put forth too much effort. 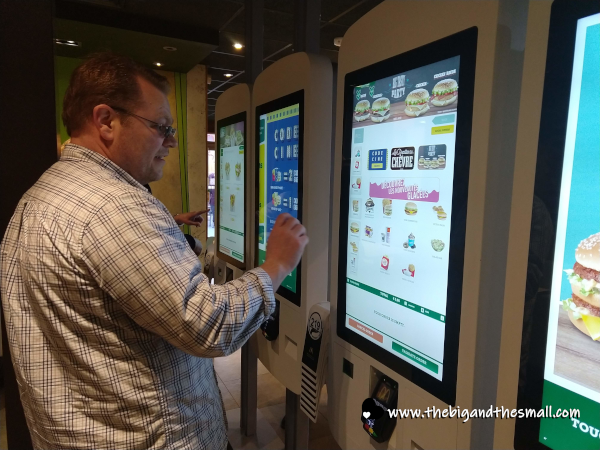 We took our time with the menu trying to find things that we have not tried before. (Though it was a bit of a fail as Sue, who was with us ordered something really unique, and later I spotted a sign for a burger with blue cheese on it!) Here we did encounter a true first for us - there was beer among the drink options! That is something I have definitely never seen at a McDonald's before. Bob said that "of course, the French would have to have their alcohol!" Personally, I would have been even more impressed if there was a wine option. Neither of us drink beer so we did not order it to try. 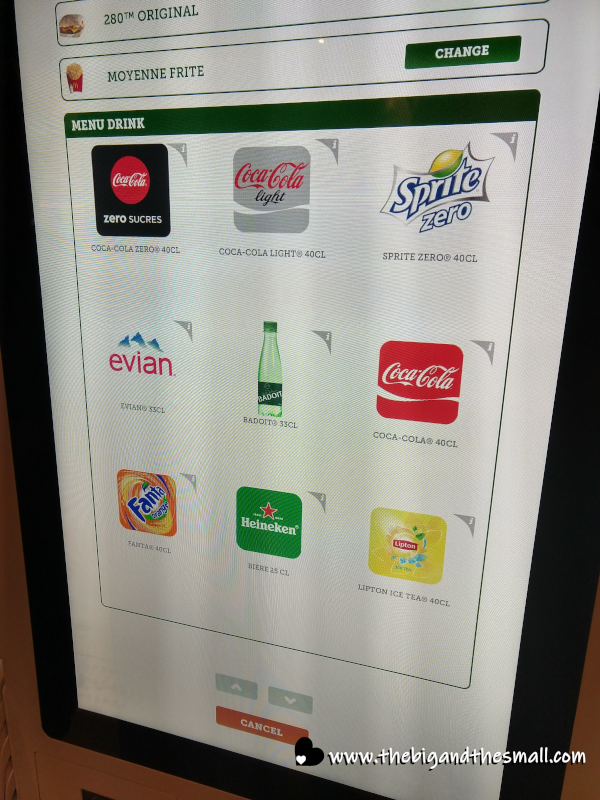 Bob and Sue had finished ordering before us so their food came before us. Sue is vegetarian so she got a salad (with real spinach and romaine lettuce, no crappy iceberg to be seen!) and a wrap that had tomato, lettuce, and fried goat cheese in it! I was super bummed we hadn't spotted that on the menu as I would have loved to try it. She said it was good. Ah well, we did have plenty of choices when it came to our food!

From top left moving clockwise, we had a cheeseburger of some sort (Joel was impressed with the bun since it had more than just sesame seeds), fries, something called a 235 burger, pomme frites sauce, a croque monsieur, and a cheeseburger on a bagel instead of a bun. The two burger options were just okay in my opinion, and while I like bagels, and I like burgers, this taught me that I do not like those two things put together. The fries were typical McDonald's fries but I really enjoy them with the pomme frites sauce! It's a mayonnaise-y type sauce with some herbs and flavorings, it's really great. 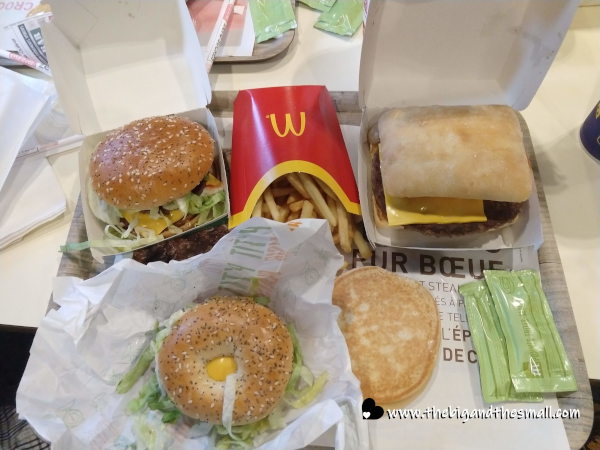 My favorite thing we ordered was the croque monsieur, which is basically French for "ham and cheese sandwich". A real croque monsieur would be much fancier with really good bread, higher quality cheese, and ham, but this McDonald's facsimile of the real things was still pretty tasty. The bread looked and tasted like a McDonald's pancake, but the ham was nice and salty and the cheese was super melty. I would have eaten the whole thing but I did have to share with Joel. 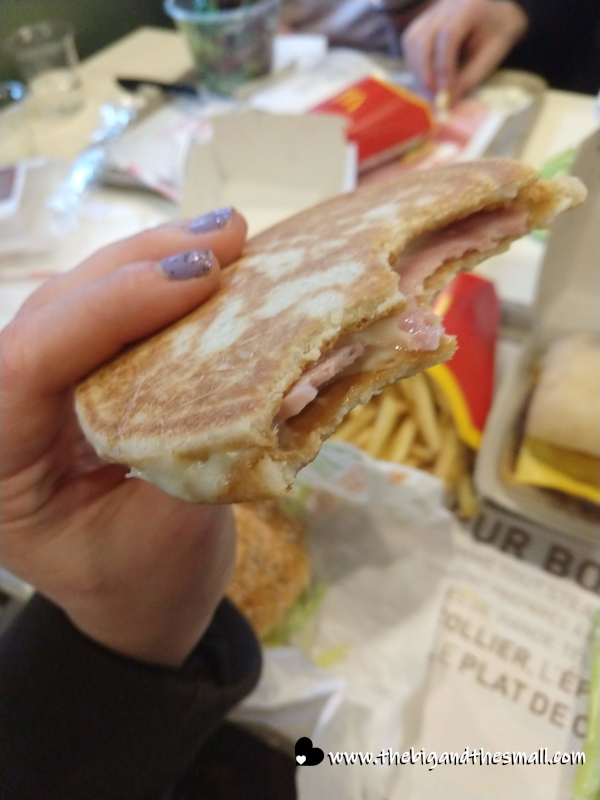 One thing that stayed consistent here to our other McDonald's Around the World experiences is that it was pricey. I'd say that abroad you might eat at McDonald's for the convenience or the familiarity, but not necessarily to save money. We've found local places with better food for much cheaper!

All in all, it was a nice stop on our way to our new housesit, though we certainly won't go out of our way to eat there again. From now on I'll be all about French cheese, bread, and wine! Bon Appetit!

I'm really disappointed to hear that the burger on the bagel wasn't everything. I was so excited when I began that paragraph and so sad by the end. Also I'm glad that you've checked it off the list and can move on to local places.... I mean... it's France... you've got a lot to work with. Kudos for sticking to the series!

You would think a bagel burger would be good, but I have saved you from having to try it out for yourself, you would only be disappointed. Some things are worse than the sum of their parts!