So far on this housesitting around the world journey, we've had some pretty bad luck when it comes to our actual travel between housesits. When we first left the states it took us three days to get to our first destination of Cyprus. Now, to be fair, that one was mostly bad planning on our part, but still, it sucked. You can read about the whole saga starting here if you want to catch up. When we left Cyprus to go to Germany we made our flight alright but by the time we got to the train station, we had missed the last train of the night to our destination - which is how we ended up spending the night in a Berlin McDonald's. When it was time to leave Germany for Wales, things went slightly better, but we had a delay getting through passport control, which led to one of our pieces of luggage walking away with someone else (and it was an entire month before we got it back!) 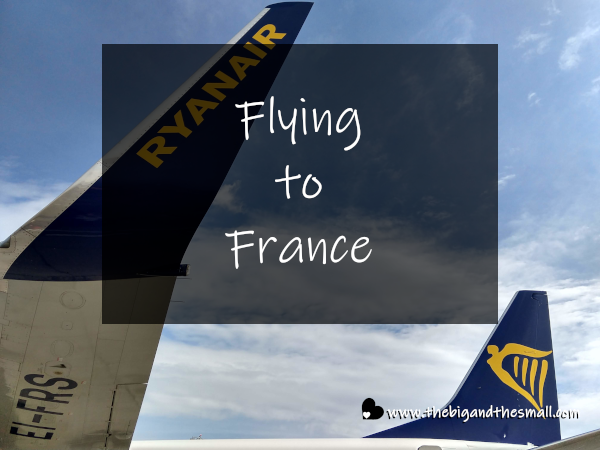 After all of our previous travel drama, I had a good feeling about our trip to France - that this was the transition that would finally be easy! My mom joked with me that it wouldn't give me very much to write about for the blog. Well, all in all, it was a pretty easy trip, but here I am writing about it anyway!

The day started simply with our English hosts giving us a ride to the airport. We learned our lesson in Germany about cutting things close to we left extra extra early, and since the car ride turned out to be completely uneventful we arrived at the airport at 9:30, when we couldn't even check in to our flight until 10:50. Still, I'd much rather be super early than even a second late in most circumstances, especially travel, so I was just fine sitting in the airport lobby until we could check in. Joel was less enthusiastic about it, but mostly he's just not good at smiling on demand. 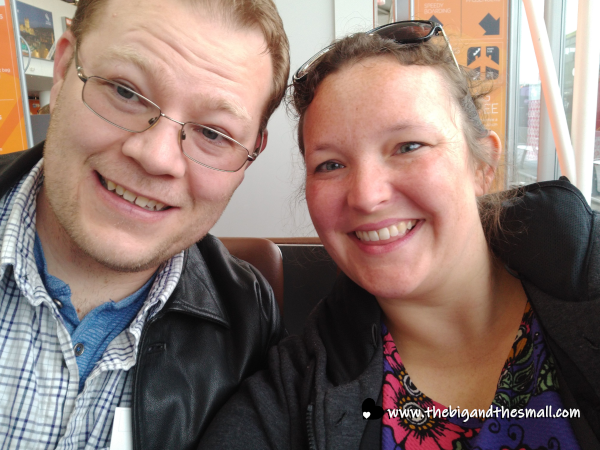 When it came time to check in they wouldn't let us use the automated system because we had US passports. So even though we were the first to arrive we ended up waiting in line a bit so we could get printed out boarding passes. When our luggage got weighed I held my breath because while one of our bags was 2 kilos underweight, the other bag was 4 kilos overweight! Airline policy says they can charge you $20 per kilo you go over, so that mistake could have cost us $80. Thankfully the lady decided to be nice (or wasn't paying attention? I'm not sure) and she didn't even mention it, let alone charge us. Phew.

With our two big bags checked it was time to make our way through security! We were at Bristol airport and I have to say this is the most efficient and amazing security checkpoint I have ever been through. They have enough staff helping people through the process that it goes really quickly, and there were all rather kind and friendly which isn't usually my experience with airport security. Joel's bags did get flagged for an extra look so all of his stuff got rifled through, but since we had plenty of time before our flight it wasn't nearly as stressful as when this has happened in the past.

We were so early we even had time to eat at the airport! Normally the prices would have scared us away, but we had just received a gift of some English pounds. Our host gave us an envelope before he dropped us off and told us not to open it till we were on the plane. I didn't listen (sorry Neville, if you're reading this!) and opened it while we were waiting to find a lovely thank you note and £40! Since the pounds won't do us any good in France we decided we could splurge on some airport food - £10 got us a burrito, tortilla chips, and a drink, while another £5 got Joel a sandwich. The food was nothing to write home about but I was glad not to be getting on the plane hungry.

Our timing was just about perfect because just when we finished eating our gate was finally announced and we made our way there. It was a long winding journey through the airport, down several flights of stairs, and then out on to the tarmac to actually board the flight. I said to Joel at one point "they know people board planes with luggage, right?" because it was not fun hauling my bags down and then up so many stairs. Ah well, that's partly what you get with budget airlines I guess. 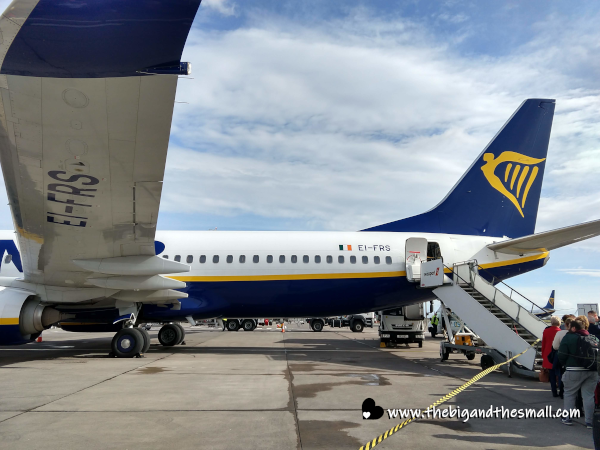 The plane ride itself was a little bumpy due to the wind, but the flight went quickly. I made some small talk with my seatmate as we were settling in, planning to read my book after that. However, it turns out she was quite the chatty Kathy and we ended up talking the entire flight. Early on when I mentioned we were housesitters the guy in front of her perked up and turned around to chat. It turns out he is looking for housesitters in France in a few months so we connected on Facebook, and that might be where we go in May! We are still working out the details so I'll keep you posted.

My favorite part of the flight was when we flew over the English channel and spotted something familiar down in the water. You can't really see it in the photo below but I promise it's there - windmills! Hundreds of the huge white ones that also dot the Iowan countryside back home! It was truly amazing to see. 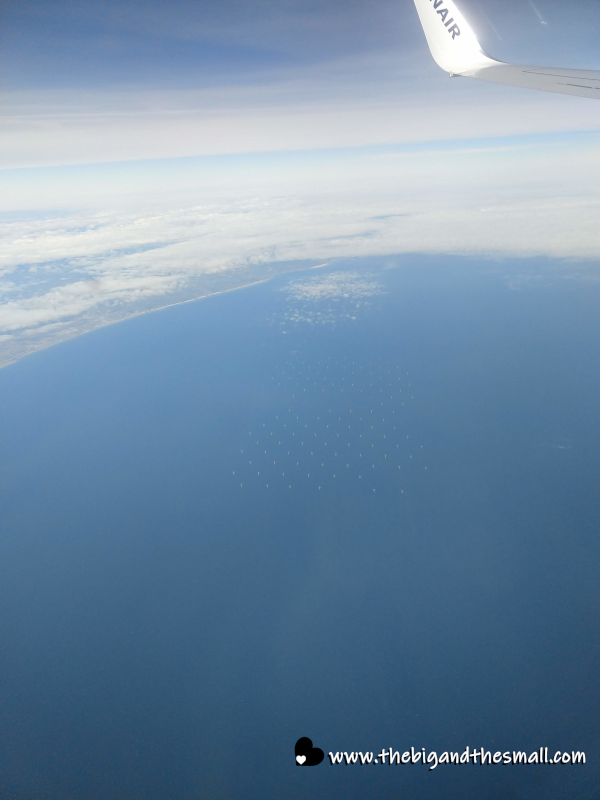 When the flight landed in Limoges and we made our way into the airport I was shocked at how small it was. Passport control was right next to the luggage carousel, and from there it wasn't far to get out the door. Thankfully this time we had no trouble at all getting through Passport Control - they barely glanced at our passports and didn't ask us a single question! We didn't even have to fill out any paperwork! Both of our bags showed up right on time and then we headed through the double doors to greet our new host.

Now it turns out that all of our good luck in this travel journey so far meant that our host, Bob, was having some bad travel luck. His car has broken down, so he asked a friend to bring him to pick us up. Additionally, some protestors were blocking the road leaving the airport so we had to take a longer way home than usual. On the way, we stopped for dinner and to pick up some groceries, so it was dark by the time we finally made it to our new home. 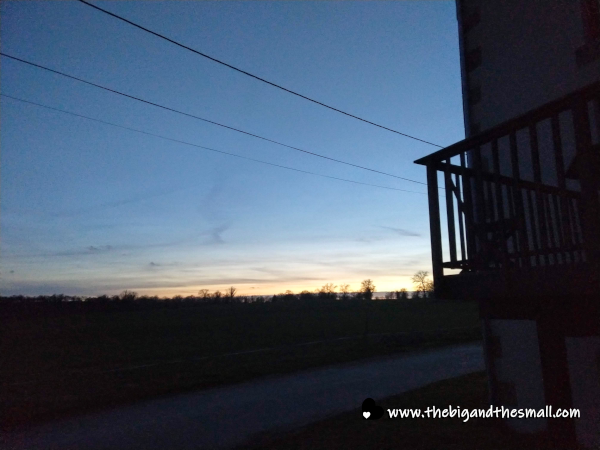 Our new place is very rural, but gorgeous, and I can't wait to share all about it - especially the four cute cats we get to take care of! Stay tuned!

Sounds like your expertise is paying off. You were able to recognize and avoid pitfalls that might have tripped you up this trip in new ways :) Glad this was easier and that your luggage made it safely. Could you write/ share a condensed version of your international travel tips and tricks or those frequently searched travel questions like (how much time to leave between stops, how early do I arrive at the airport, ect) for optimally smooth travel?

Moving on to perfection...

Didja get my little Wesley joke there? ;)

We are building up some expertise that helps - though I think the biggest help this time was having a ride to the airport and getting picked up directly at the airport - no waiting or trying to catch buses or trains!

That's an excellent idea for a blog post - I'll put it on Joel's radar as he's the one that does all of our travel planning!