The Wonders of Wookey Hole: The Caves!

Over the weekend we ventured out to a local attraction that brings people from around the world to its doorstep - Wookey Hole Caves and Attractions! The price was a wee bit high for our budget (a little over $20 a person), but when we saw how much there is to do at this place, we decided it was worth splurging since who knows if we'll ever be around here again. 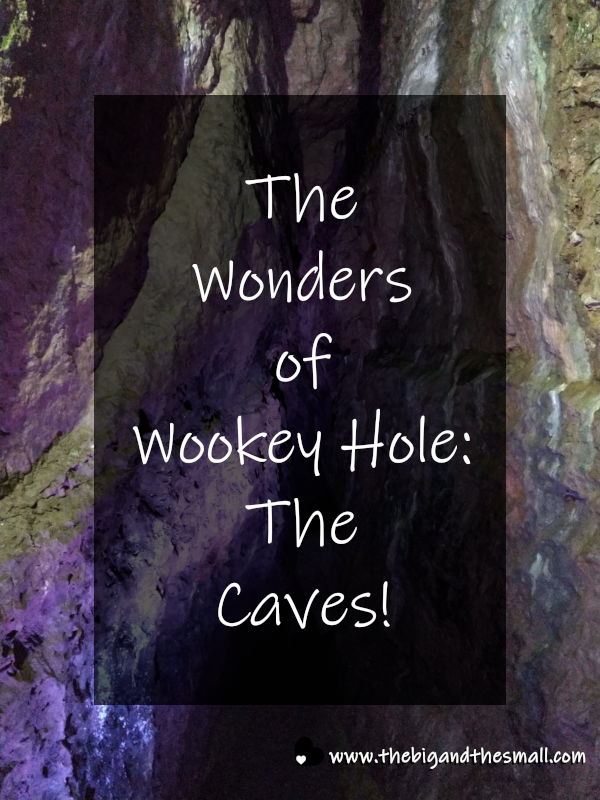 Wookey Hole is actually the name of the town in England where the caves and other attractions are located. It is less than 10 miles from our housesit, but with the curvy English lanes we had to take to get there it was almost a thirty-minute drive. We only drove through a small portion of the town, but it was adorable. The caves and attractions are actually located right inside the town - in fact, a regular town road drives right through the middle of it! When you pay to enter you get a sticker showing that you paid since otherwise, anyone could wander in off the street. There are so many things to do at this place it will take two blog posts to cover it all, so today I will focus on the caves, and tomorrow I will share about the mini-golf, dinosaurs, 4D cinema, and more!

We ended up doing the cave tour about halfway through our time there. We lucked out on the timing, arriving at the entrance about five minutes before the next tour was to start. We also lucked out on our tour guide - he was an older gentleman with a wealth of knowledge about the caves, and quite the sense of humor! When the gathered crowd was ready at the appointed time, a cage-like door was opened and we entered the caves. Our guide was sure to note that the cage doors were not to keep us in but to let the bats out. Immediately upon entering we descended down some steps further into the cave. 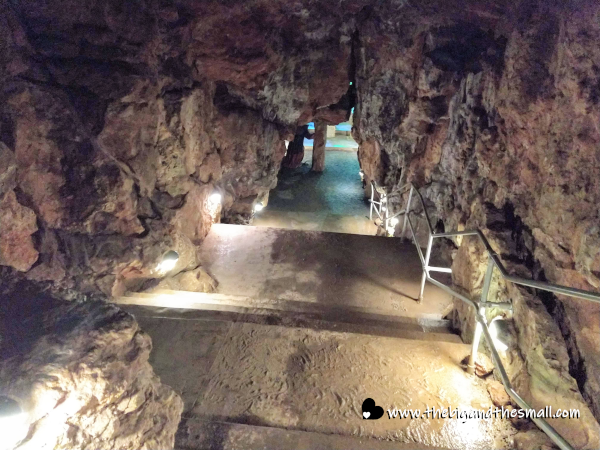 Our guide shared stories about the 6,000 years of human history found in these caves. A museum in the nearby city of Wells has a lot of artifacts and skeletons that have been found in the cave, showing that humans occupied this area for a long time. However, the cave was only rediscovered in 1912. Some of the rooms we explored were excavated as little as three years ago.  In this first area of the cave, one section was staged to show what it was like when skeletons were found (that have since been removed for further study). 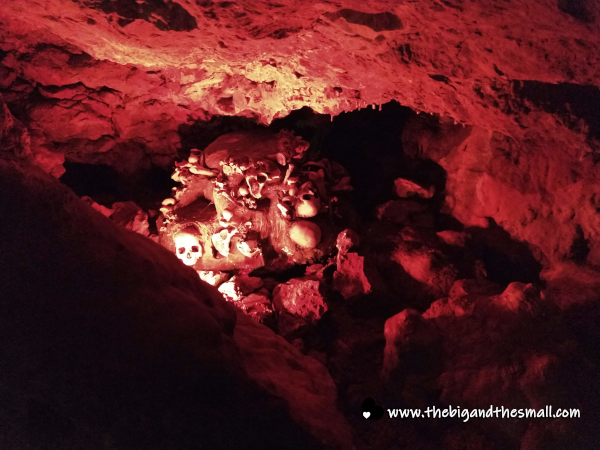 It was kind of spooky and I loved it. There are many spooky tales surrounding Wookey Caves, as for a long time the locals believed a witch lived in the cave! Supposedly she cast curses on the townspeople, causing cows not to give milk, or sheep to run away when it was time to be fleeced. The people were so scared of the witch they implored the Bishop in Wells to do something about her - so he sent a monk to confront the witch. The story goes that he entered the caves with just a chalice, a Bible, and a single candle, and he confronted the witch. He drew water from one of the pools in the cave, blessed it to make it holy, then threw it over the witch - and turned her into stone! This is a terrible picture but the guide is pointing at the rock that is supposed to be the frozen form of the witch. 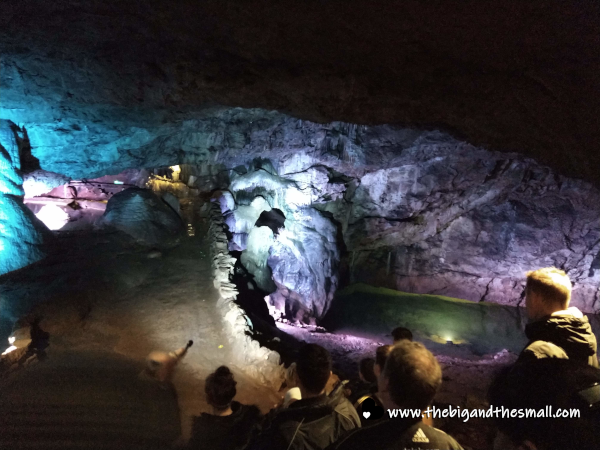 Nowadays the Witch of Wookey Hole is a fun gimmick about the place, I never caught a picture of her but there was a woman dressed up as a Witch wandering around all day talking to guests and posing for pictures. (What a fun job!) As we continued through the caves we came across many of the pools located inside, some of which are as much at 50 feet. Our guide informed us that these caves are actually where cave diving was invented! Also, two of the people who regularly cave dive in Wookey Hole went to help rescue the soccer team that was trapped in Thailand last year. 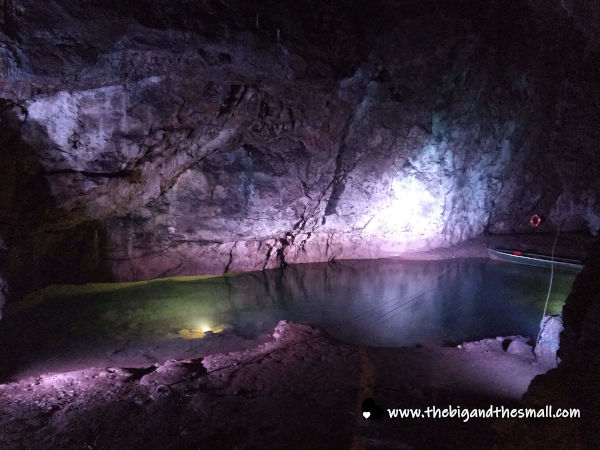 One of the portions of the cave we entered is referred to as the grand hall - it rises up over 70 feet high! Many portions of the cave are actually available for rent to use for events or weddings. I have thus decided that one of my life's goals is to officiate a wedding inside a cave - I mean, how awesome would that be. 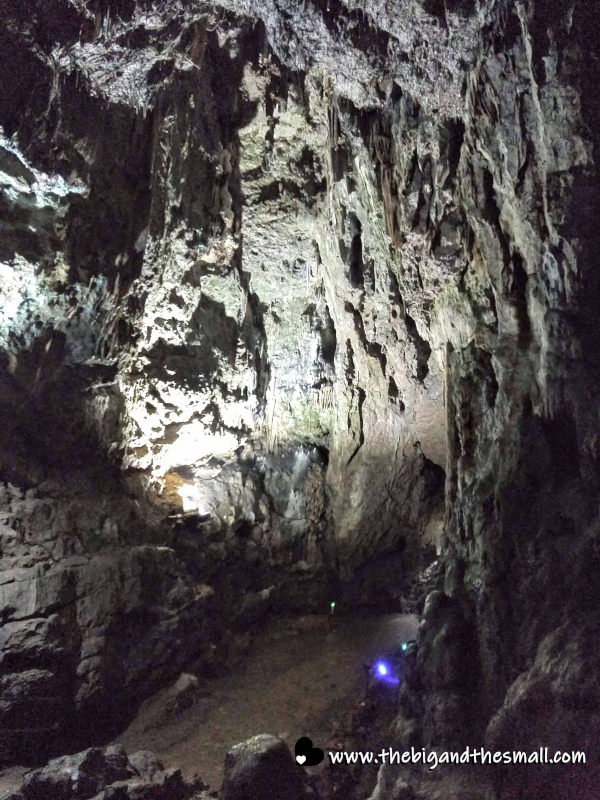 As we moved through the cave, there were many places where we had to duck in order to move to the next section. I took a picture of this one looking back on the way we had come. It's hard to tell in the picture but I had to bend over with my back almost paralell to the ground to make it through that portion. Our guide called these sections the "quack! quack!" sections... get it? Because you have to duck? (It made me laugh anyway) 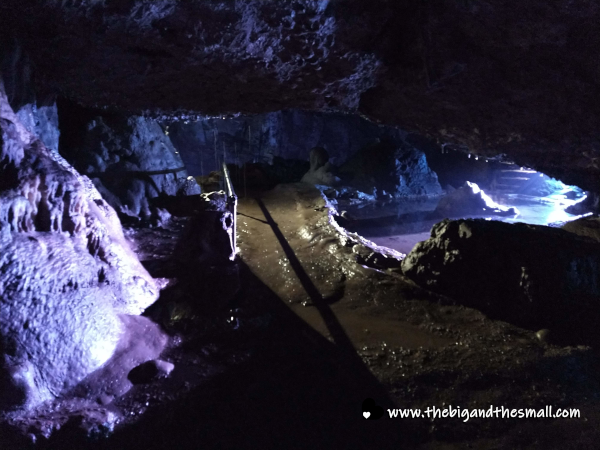 About halfway through our exploration of the caves we came across the place where cheese is stored. Because the conditions in the cave remain constant at 52 degrees and a certain percentage of humidity (I can't remember what exactly) it is a perfect place to store cheese as it ages. The guide said that right now the oldest wheel of cheese in this section is about 7 months old. A single wheel can sell for almost £500 pounds, and cave-aged cheese from Wookey can be bought here in the gift shop or in some of the fanciest stores in London. (Surprisingly for our cheese-loving selves, we did not buy any!) 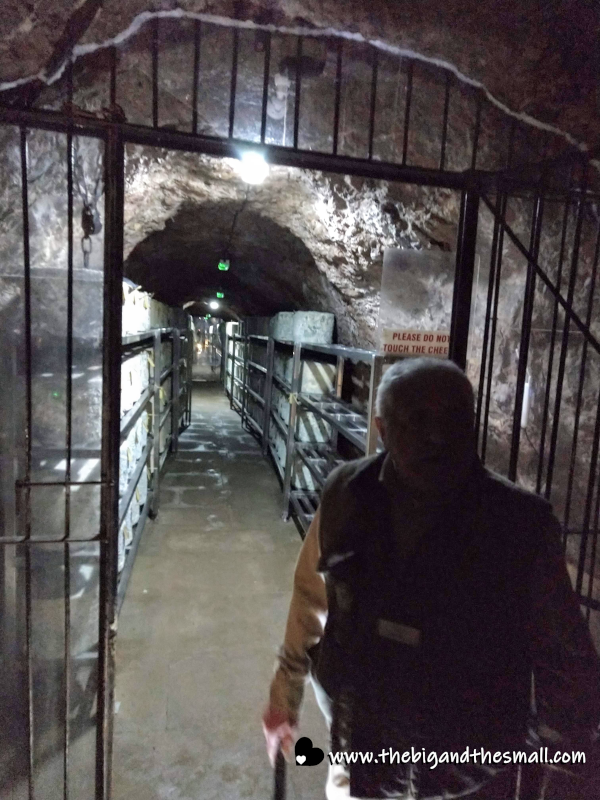 The final room on our journey through the caves is the most recently excavated one, and they found a natural phenomenon that is only found two other places in the entire world. In the other two places, this rock formation is outside, which means it is exposed to the elements and subject to erosion over time. Since this one is located in the cave, it is likely to be preserved for a very long time. The guide referred to it as "Merlin's Beard" and it's the striations in the rock you can see in this picture. He also shared that at this point we were about 300 feet underground with about 70,000 tons of rock above our heads. 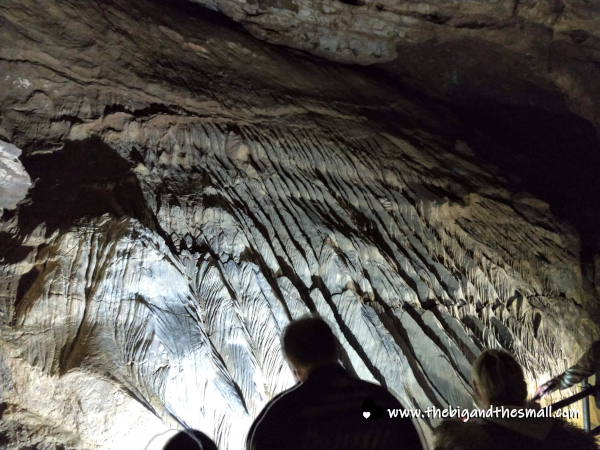 The whole tour of the caves took about 40 minutes and was really interesting the entire time. You definitely want to come prepared for plenty of walking, and wear shoes that will be good in the damp and on the sometimes slippery rocks. As my mom would say "this is not a fashion show!" - you want to be practical. If you have any interest in caves or human history this is definitely a place worth checking out! We skipped the cave when we went to Cheddar Gorge (it was the same price as here for an unguided tour!) and I think we definitely made the right choice as these caves are more extensive and you get a guide to give you the history as you go through.

So what do you think? Would you go through the caves of Wookey Hole? Would the stories of the Witch spook you or make it more fun? I love anything that gives a place a year-round Halloween vibe!

Yes, I'd love to adventure into the caves! I think the witch story makes it more fun, particularly since no one died in the banishment of the witch (except for the possibility of there being a soul trapped in the rockface, but that takes some imagination). It sounds much less terrorizing than the usual "purge the witch" type tales where they celebrate killing "mouthy" women for their strongly held convictions.

Ooh you're right, I hadn't thought of the witch story like that. It's definitely milder when you consider other stories. All the witch stories gave the whole place a real Halloween vibe which you know I love! I'd love to visit sometime in October when they actually do Halloween stuff - I'm sure they go all out.