Eurovision - What Is It and Why Should I Care?

I mentioned way back in a post about our UK road trip that our friend Steve got us hooked on something called Eurovision. As Americans, Joel and I had never even heard of Eurovision before Steve mentioned it as one of his hobbies. Once he explained to us what it is - we were hooked! 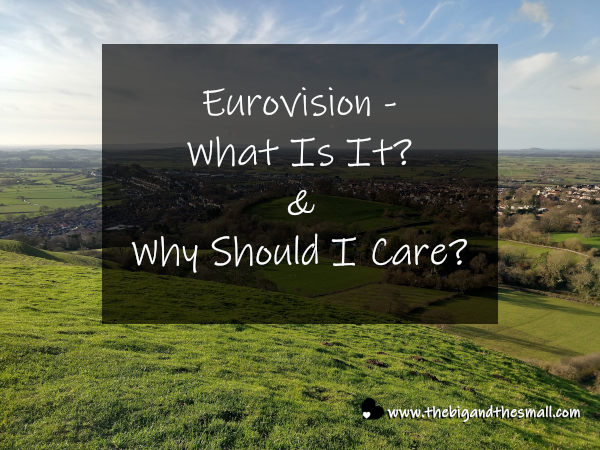 So I'm curious, fellow Americans, have any of you heard of Eurovision? (At least before I mentioned it last December?) Do you know what it is? Do you follow it? I'm so curious to know if we were the only ones out of the loop or if it really just isn't a thing in the States.

Ok, so, in case you are out of the loop like we were, let's get to the two big questions of this blog post.

The full name is the Eurovision Song Contest and it is an international song competition held among countries that are a part of the European Broadcasting Union. Other countries sometimes get invited to participate, like Australia. Basically, it is the Olympics of music, with a smaller amount of countries allowed to compete. Eurovision began in 1956 as a way to bring the countries of Europe together with friendly competition. Whoever wins the contest hosts the contest the following year.

BECAUSE IT IS AWESOME. When Steve first got us hooked we spent several nights in a row watching old Eurovision finals from the 70s, the 90s and catching up on 2015-2018. If you like music, dance, performance at all you will love Eurovision.

There is also a fun political side to it - often countries will send songs with a particular message, and there is a lot of strategy in how the scoring is done. Each country gives two sets of points to their 10 favorite songs - 12 points, 10 points, then 8-1 points. One set of points comes from a professional jury, and the other set comes from the popular vote (usually done online or via phone). No one in any country can vote for their own country. Sometimes it's clear the professional voting was done based on political relationships rather than quality of music,  but it keeps it interesting!

Don't believe me yet about how awesome Eurovision is? Well, let me share with you some of my favorite songs!

This is the winning song from 2018, submitted by Israel, which means the 2019 Eurovision is being held in Tel Aviv.

Toy, by Netta (Click the link to go to the YouTube video of the official music video)

I love that one, but this is another one of my favorites from 2018, submitted by the Czech Republic.

Lie to Me, by Mikolas Josef (Click the link to go to the YouTube video of the official music video)

This next one did not win in 2017, but it's what I would have voted for if I had known about Eurovision then. This one is from Romania and includes yodeling! That sounds crazy but it's really fabulous. Check it out!

Yodel It! by Ilinca & Alex Florea (Click the link to go to the YouTube video of the live performance in 2017)

Sometimes countries submit joke entries, either because they want to troll another country they are having a conflict with, or because they deliberately do not want to win. There is a lot of expense involved in hosting Eurovision (which you do the following year if you win), so sometimes countries ensure that they will lose by sending something ridiculous. This next one is my favorite joke entry that was sent by Ukraine to troll Russia in 2007 (it actually got second place in the final!) If you have seen the movie "Spy" with Melissa McCarthy this act makes a cameo!

Not only do you get amazing acts as part of the competition, but there is also some amazing stuff that gets performed during the final while they are waiting for votes to be finalized. Are you familiar with Riverdance? That actually started as a Eurovision filler act during the 1994 final held in Ireland (and Ireland won again that year!)

My personal favorite, however, is from 2016. This year the hosts parodied Eurovision itself and a bunch of past songs with a performance titled "Love, Love, Peace, Peace" and it is hilarious and wonderful even if you aren't familiar with all of the acts they reference. Every single thing they reference is a real Eurovision entry so it gives you a good overview of how diverse the competition can get!

So this is probably a good start to get you going down the Eurovision rabbit hole...but wait, there's more!

The final is held in May every year (May 14-18 this year), but leading up to that each country has to choose what song they are sending! Everyone does it a little bit differently, but in general, it means a smaller in-country version of a song contest. Last weekend we watched the country finals for both the UK and Australia.

The UK pre-chose 3 songs and 6 artists for their country final. Then each artist got assigned to one of the songs and could choose to perform/interpret it how they wanted to. For the final, we were treated to each song done twice in a row, by first one artist/group then the second, then a panel of judges chose which of the two went to the final. Then we heard each song one more time, by the winning artist/group, then a vote was taken by phone/online to determine which of those three was the winner. This was a strange way of doing it because you could tell that the artists were not really connected to their songs because they didn't have a hand in creating them. The winner was clear, but even still, I would love to see this artist get his hands on a better song.

Of course, politically, the UK has no chance of winning given all that is happening with Brexit (how awkward would that be?) so a lot of people around here don't really care about Eurovision right now.

Bigger Than Us, by Michael Rice, 2019 UK Entry (Click the link to go to the YouTub video of the live performance)

Australia was much more straightforward with 10 songs to choose from, all originals by or collaborated on with the artist/s who performed them. All 10 were performed live and then the voting was open to everyone in Australia via phone/online.

This is the act that won (I'll admit, the staging of it is incredible):

Zero Gravity, by Kate Miller-Heidke, 2019 Australia Entry (Click the link to go to the YouTube video of the live performance)

This is the act I wanted to win:

2000 and Whatever, by Electric Fields, 2019 Australia Runner-Up  (Click the link to go to the YouTube video of the music video)

Steve is also keeping us updated on every song chosen as other countries go through their finals, but I won't take the time to list them all here. I think I gave you enough links for today! I know it will take a long time to click through and watch all of them, but I promise IT WILL BE WORTH IT. Unless you don't like music and then, well, you probably should have just skipped this post.

Okay, so did you watch any? Which was your favorite? Are you hooked on Eurovision now like I am? Had you ever heard of it before? Talk to me about this so I don't have to drive just Joel and Steve crazy with it!