The New Room, Bristol - The Oldest Methodist Church in the World

A few weeks ago when we attended an ecumenical church service in Glastonbury, I met someone who informed me that the oldest Methodist church in existence is in Bristol, England. Since Bristol is only an hour away from our current housesit, Steve and I set out yesterday to find the New Room, Bristol, which also houses a museum, and check out some Methodist history! I have to say I ended up learning some things I never learned in seminary (or perhaps I just forgot). 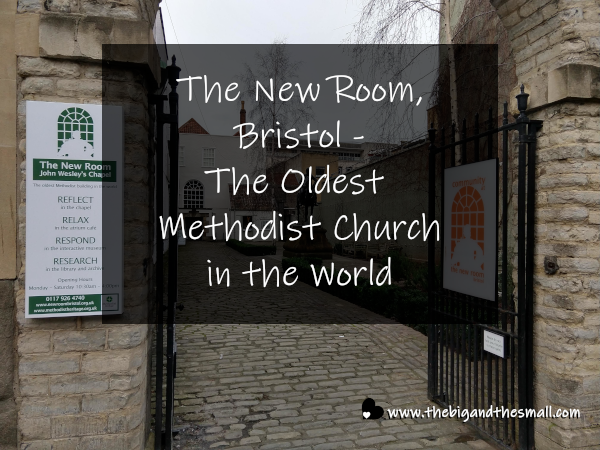 The courtyard for the chapel is right off a busy street in Bristol. We went from modern-day streets and contemporary shops to the quiet courtyard, and it felt almost like stepping back in time. This statue of John Wesley (the founder of Methodism) on his horse greeted us stoically. Historians estimate that over the course of his lifetime Wesley rode about 250,000 miles on his horse - the equivalent of circling the world 10 times! 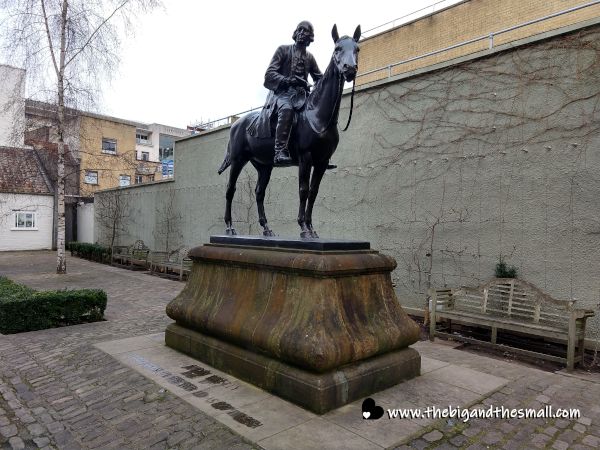 After passing through the courtyard (where horses would have been kept back in Wesley's day) we stepped into the chapel. The current building that stands was built in 1748. The original building, from 1739, turned out to be too small for their needs and too hastily built, so it was redone into was is still there today. The pews in the middle only date back to the early 1930s, the original building would have had simple wooden benches or left it open to fit more crowds in as standing room only. This building was built as a "new room" where two Methodist class societies could meet, and quickly evolved into a hub of activity that included not only worship services and study, but offered community services such as food and clothing for the poor, education for children, medicine for those in need, and arranging visits to the local prison. 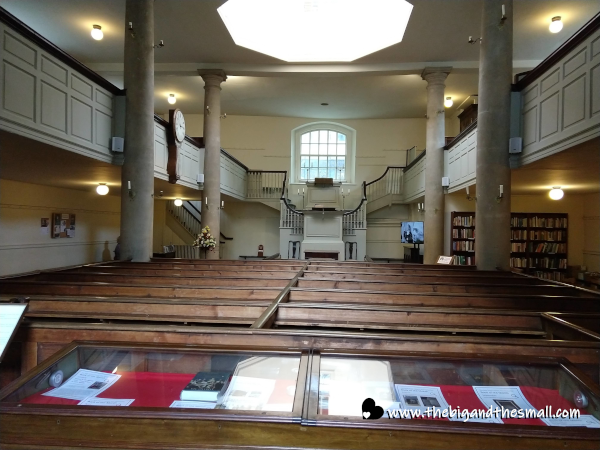 The chapel has a few distinctive features because of the time in which it was built. The Methodist movement started as a revival within the Church of England - John Wesley never intended to start his own denomination. In fact, when he allowed this building to be built, he intended it only as a meeting house and hoped people would still attend their local parish. Instead, they began to worship here and he had to register it as a chapel. Social upheaval at the time meant that often the Methodist would come under mob attack (some people thought there were secretly Catholic and part of the Jacobite revolution), therefore the lack of windows on the first floor was seen as a safety measure from such attacks. Additionally, the pulpit was built to not have easy access from the first floor. One must first ascend the steps on the left side of the room, then descend the steps into the pulpit. This meant in case of attack the preacher had an easier escape route, as they were often the target of such an attack. 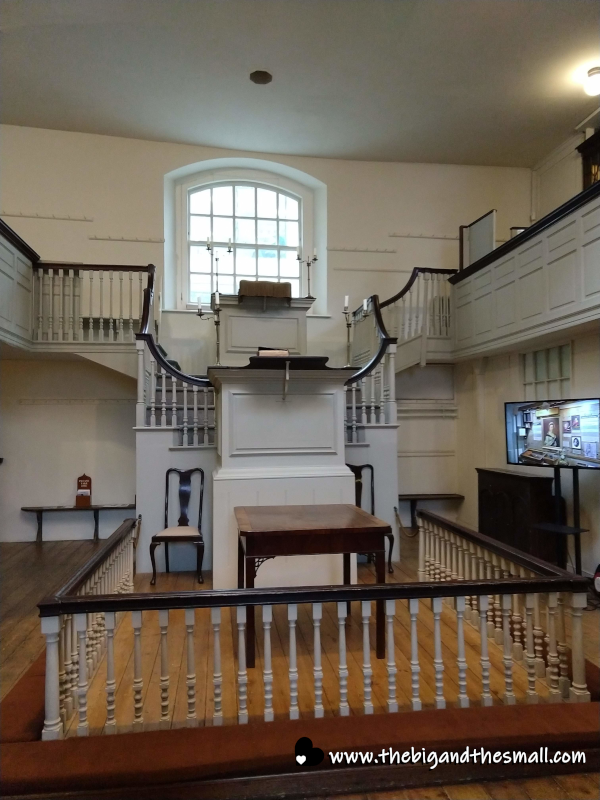 Once we passed through the chapel, we entered an inner courtyard that had only recently (within the last 18 months) been covered and built in. A cafe and a bookstore have been added to the space, and I could see it being a lovely place to get a break from the city if one lived in or traveled to Bristol often. 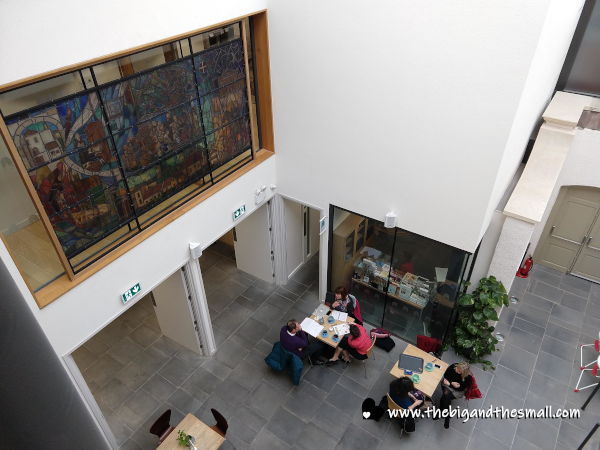 From there we took the stairs up two flights to enter the Methodist museum. The museum is in part of the original building from 1748, taking up space that would have been a meeting room, and sleeping rooms for the various traveling preachers and lay ministers who would pass through Bristol. We even got to see the room where John Wesley himself stayed whenever he was in town! The room contained an original bed, as well as several original chairs from Wesley's time there. 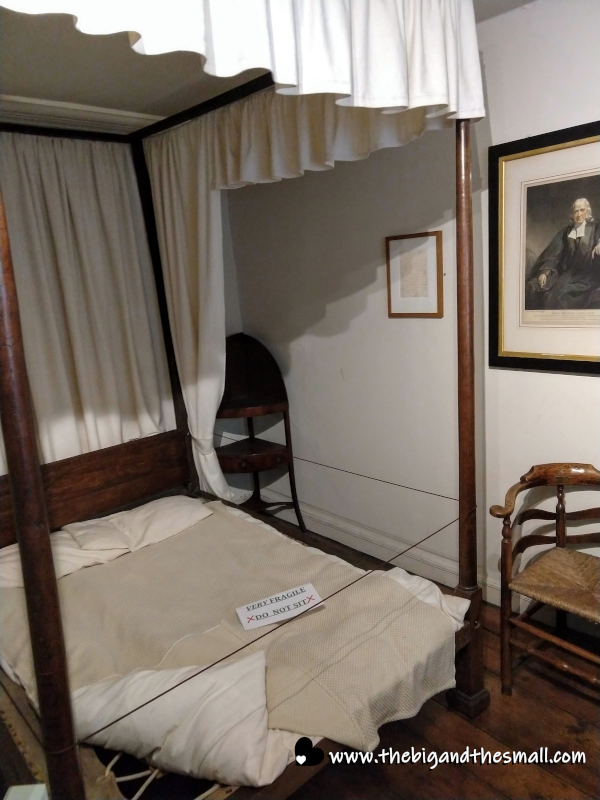 In the bedroom, a special windowsill was built to Wesley's specifications. He spent a lot of time reading and writing (as one can tell from his prolific works) but he did not think people were meant to be idle. So he had the window sill built to be a standing desk of sorts, and he would often stand to do his work. I love it that only in recent years have standing desks become a trend in modern times - yet Wesley showed us how to do it three hundred years ago! If I  ever work in a church again and have a desk, I'll be able to argue for getting a standing desk using John Wesley as my example - who could argue with that? 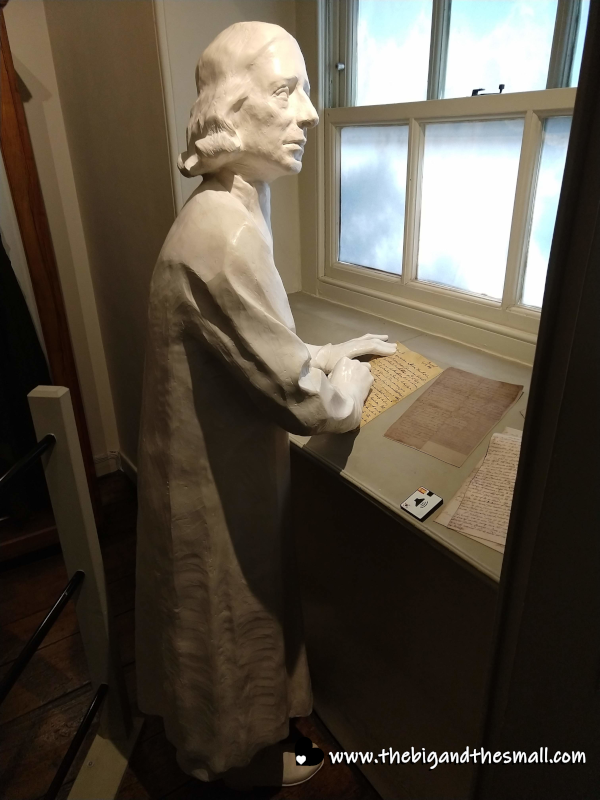 The museum walked through Methodist history from Wesley's Holy Club at Oxford to its spread through the colonies, and all of his preaching throughout the UK. There was a particular emphasis on the social issues that Wesley was passionate about, which is one of the reasons that I am a Methodist today. This particular piece at the end really struck me, as it names almost all of my values and political beliefs today, yet these were Wesley's principles in the 18th century. 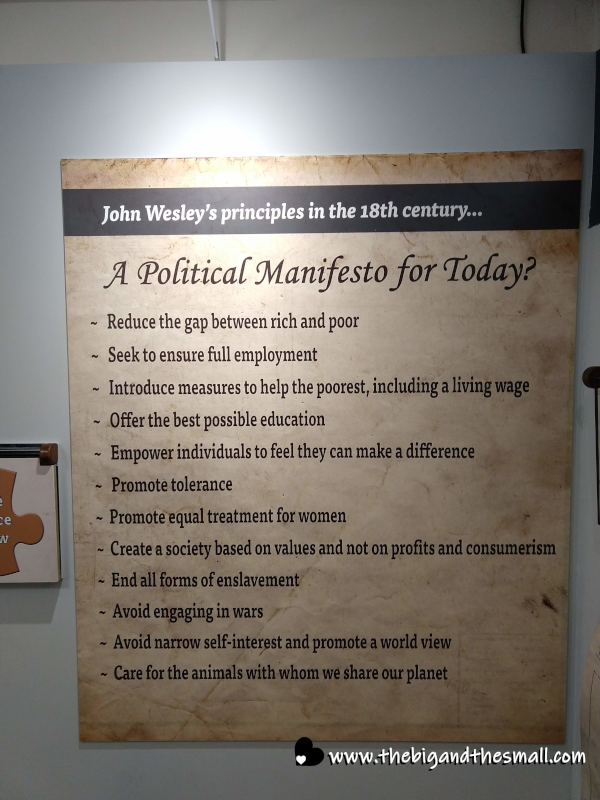 I was also struck by a sign sharing Wesley's advice on how to preach; I was curious to see if I follow all of this advice when I preach. Ironically enough the display admitted that Wesley regularly broke four of the points himself.
1. Always suit your subject to your audience
2. Do not preach more than twice a day during the week or three times on Sunday.
3. Choose the plainest texts from the Bible to preach on.
4. Take care not to ramble from your text but to keep close to it.
5. Be sure to begin and end at the time appointed...People imagine the longer a sermon is the more good it will do. This is a grand mistake...the Methodist rule is to conclude the service within an hour. [Note: this one cracked me up because it is still so very true about most Methodists today. As a pastor, you'll hear about it if you let the service go long!]
6. Speak justly, readily, clearly...Clearness, in particular, is necessary...because we are to instruct people of the lowest understanding...Constantly use the most common, little, easy words (so they are pure and proper) which our language affords.
7. Beware of clownishness...Avoid all lightness, jesting, and foolish talking.
8. Never scream. Never speak above the natural pitch of your voice.
9. Take care to avoid anything awkward or affected either in your gesture or pronunciation.
10. Don't just say 'I read only the Bible' in order to preach, read the most useful books, and that regularly and constantly...at least five hours in twenty four...or return to your trade.
11. There is no need to throw away old sermons just because they are old - the best can be reused.
12. Never preach without doors when you can with any conveniency preach within. 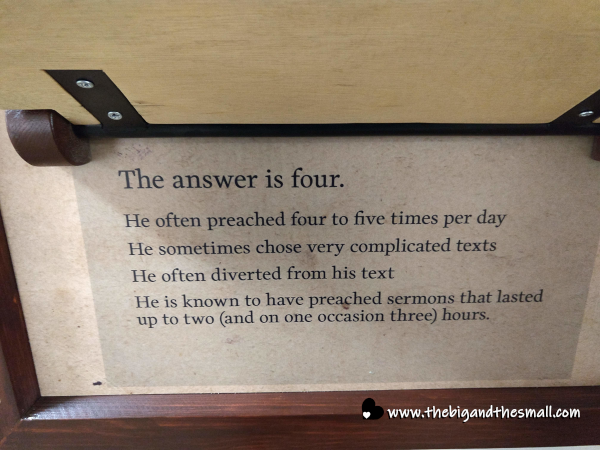 There was so much more information in this museum and I wish I could share it all with you, but I will stop here for today. If you are interested in more or have any particular questions you want to be answered let me know and I will do my best to answer!

I bet that Wesley never had to worry about #7, he doesn't come across as someone who would be mistake for clowning around. Did you get in the pulpit?

Ha, right? I love Wesley's theology but he always strikes me as a bit of a dud (all work and no play.) I did not get in the pulpit! And for the life of me now I don't know why! I totally should have, it wasn't blocked off or anything. That would have been an awesome picture.