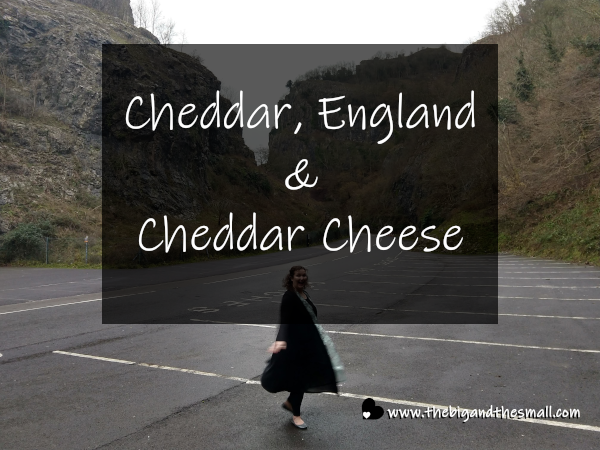 Now that our friend Steve has joined us for the week we headed off to Cheddar, England this morning to check it out. Yes, it's only 8 miles away, but on English roads that takes 30 minutes and we much prefer letting Steve drive that far. Plus, Steve loves cheese, too! (In this pic Joel is holding up our blue Aldi bag because it says "Say Cheese!" on it, but that part didn't turn out in the photo.) 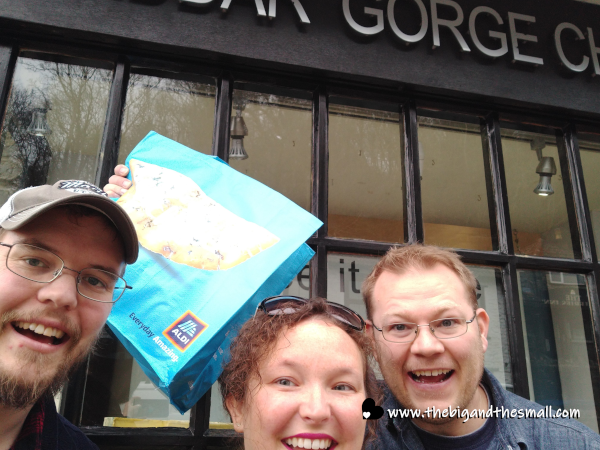 As soon as we got to town our first stop was the Cheddar Cheese company - the only place that actually still makes cheese in Cheddar. Unlike champagne, which can technically only be called that if it comes from Champagne, France, cheddar cheese can be made anywhere. Still, we were quite excited to get some of the real stuff from the real place! 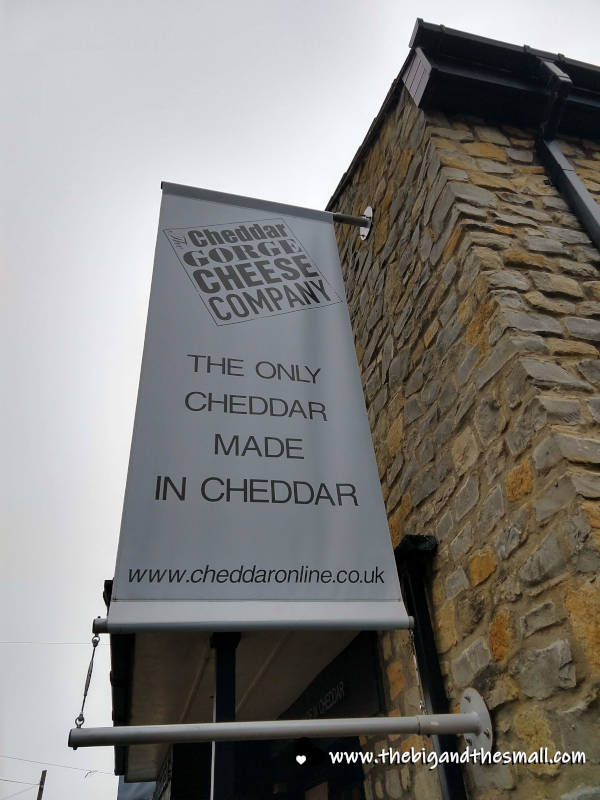 Once inside there is a huge array of cheddars to choose from. The varieties have two types - ones that vary just by how long they have been aged, and ones that vary by what flavors have been added to the cheese. If I could only have one type of cheese for the rest of my life I would choose cheddar - so I was in heaven! 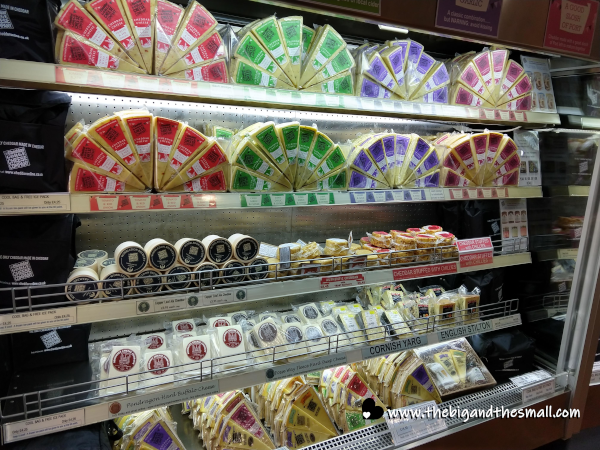 Not only do they have all these different cheddars to choose from, first they let you taste ALL OF THEM! We learned our lesson the hard way about not trying cheese before we buy, so we set out to try every single variety they had available. I was so busy eating cheese I didn't get a picture of the whole array, but here's a shot of a few of the kinds that were available at the end. 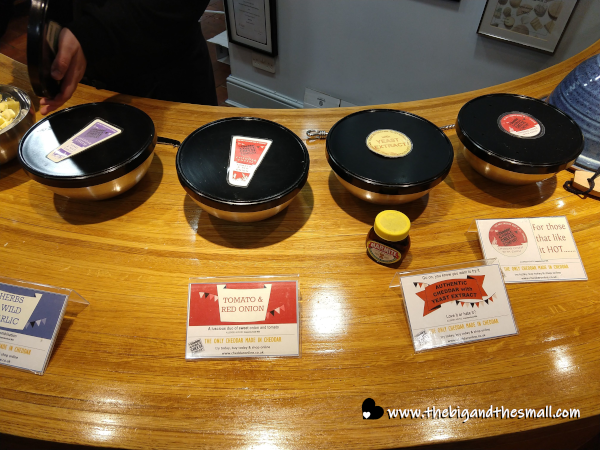 The samples started on the left by going through the different ages of cheese, from mellow, to mature, to vintage. Vintage is by far my preferred age. Then there was a cheddar that also had some blue cheese flavor to it - it naturally grows the same kind of mold found in blue cheese. That sounds so gross when I say it out loud, but I do love blue cheese! The combo of the two was weird but good - the first bite would taste like a regular cheddar, and then all of a sudden it would taste like blue cheese. The second half of the samples had all of the flavors - port (wine), ale, two kinds of garlic flavored ones, tomato & onion, and Marmite were just some of the options available.  We ended up buying a chunk of herbs and garlic, hot chili, and oak-smoked, while Steve grabbed a chunk of the port. Guess what we are having for dinner tonight?! 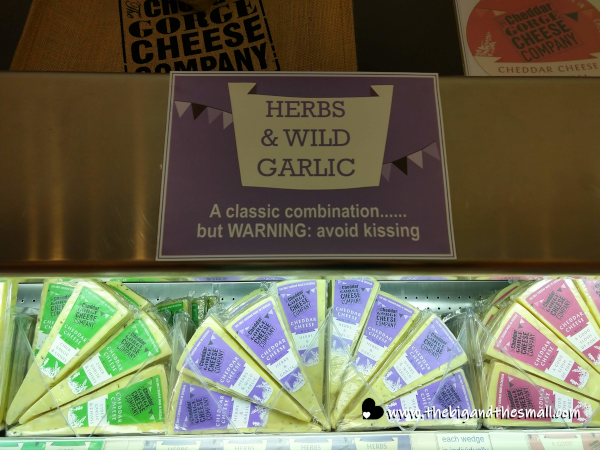 Not only do they sell the cheese here, but they also make it here! So we took a step back behind the curtain to see how the magic is done. A sign informed us that our cheesemaker of the day was Sam, so here is Sam hard at work. He was in the middle of what is called the "wheying out" process. The curds and whey are put into the large vat, where the way starts to drain out at the bottom. The whey is then fed to pigs, while the curds get shoveled out (literally with a shovel) into a cooling table. 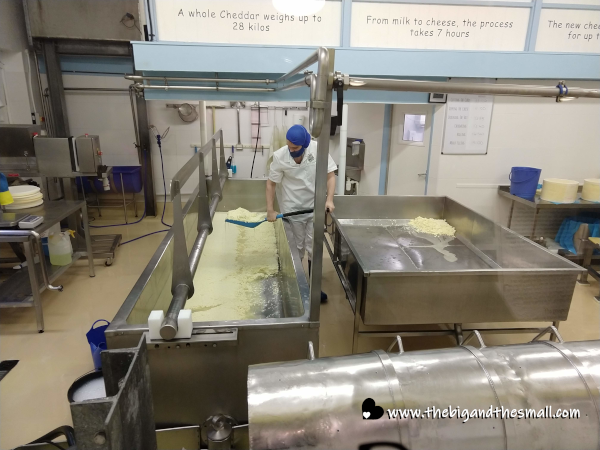 The next step (which we didn't stay to see) is the "cheddaring" part of the process that is unique to cheddar cheese. One all the curds are moved from one place to the other, a channel is cut through the curds to allow even more whey to come out. Then the curds continue to be squeezed and pressed until they form a solid piece and almost no whey remains. The term cheddaring is derived from the unique sequence of cutting, turning, and stacking the blocks of curd to prepare them for milling. It is still done by hand here, but most places have automated the process.

Next, the curds are milled which helps to cool them and release more whey, as well as evenly mix in the salt which is added at this point. Then the cheese is poured into molds and pressed for 18 hours, then 36 hours. The cheese gets pressed a third time before being removed from the mold, wrapped, and tagged, then put into storage. The blocks of cheese are then aged for certain amounts of time, depending on what flavor you want. Mellow cheddar is aged for 7 months, mature cheddar for 10 months, and vintage cheddar for at least 12 months. Here is a photo of some giant cheese blocks just chilling out in storage. 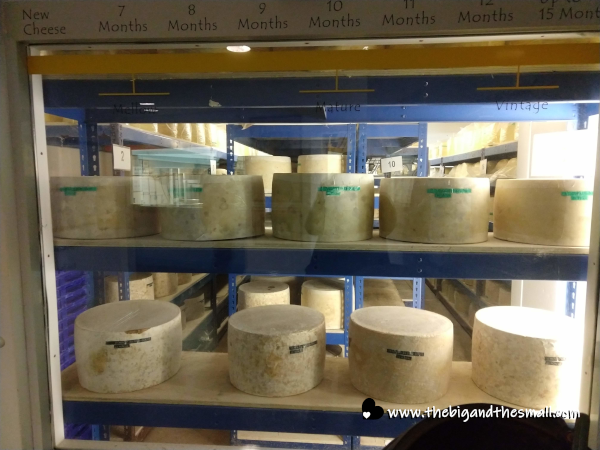 I enjoyed seeing how the cheese was made, and it really made me appreciate it more. I never knew how much work went into it! It also made me wonder though... who first figured out this process? How and why? What possessed them to take this stuff, separate it, smush it down, then leave it alone for a long time and assume it would still be edible? I mean, I'm super glad they figured it out, I just really would love to know the thought process.

There was a timeline of cheddar cheese that was really fascinating, here are just a few of the highlights: In 1170 Henry II declared Cheddar to be the best in Britain, and 10,240 pounds of it was recorded in the King's accounts. By 1625 the demand for cheddar cheese was so high in the court that the cheese was sold before it was made, and for a long time cheddar was only available to the royals. In 1840 when Queen Victoria married Prince Albert the town of Cheddar gave her a whole Cheddar cheese weighing 1230 pounds.

Can you imagine living in a time when cheddar cheese was so expensive and rare you could only have it if you were a part of the royal court? Boy am I glad that is not the case today.

So, did you know that cheddar cheese actually comes from a place named Cheddar? What is your favorite kind of cheese? Let's chat all things cheese!

I'm trying to be dairy free for Addie, who seems to have trouble digesting milk proteins right now, so your post made me hungry and SO envious!! I love cheddar, so I'm glad that it has become a cheese for the commoners as well as royals. What was your favorite variety? What was the type of difference in the taste between mature and vintage? I might applying torture to myself but can you describe the difference?

Poor Addie, I hope milk becomes easier for her at some point - for her sake and yours! Definitely glad cheddar is for the commoners now, lol.

My favorite from this place is the herbs and wild garlic.

My absolute favorite overall is almost any vintage cheddar. They give them numbers to identify "strength" here, up to 6 I believe, and 6 is my favorite. We get a vintage cheddar strength 6 from Aldi for very cheap and I love it, even more than some of the stuff we got at this fancy place. The taste difference between mature and vintage is really about the amount of flavor you get, the flavor is the same it's just stronger in the vintage if that makes sense. There is also a texture difference, the older it gets the more it gets crumbly and has some crunchy bits, while the younger it is it tends to be more creamy. I would say a vintage is best for slicing and eating straight (with crackers, etc.) while a younger cheddar is better for shredding and melting.

I hope that helps and doesn't make you miss cheese too much!