Choosing Your Own Adventure

When I was growing up the “Choose Your Own Adventure” books were popular. In these series, each book was based on the idea that you, the reader, could choose what happened next. At the end of the page there would be a choice - do you turn left or right? Based on your choice you would flip to a certain page in the book and read what happens next. Eventually, you would get to one of many endings available in the book, and there you had it - you chose your adventure! 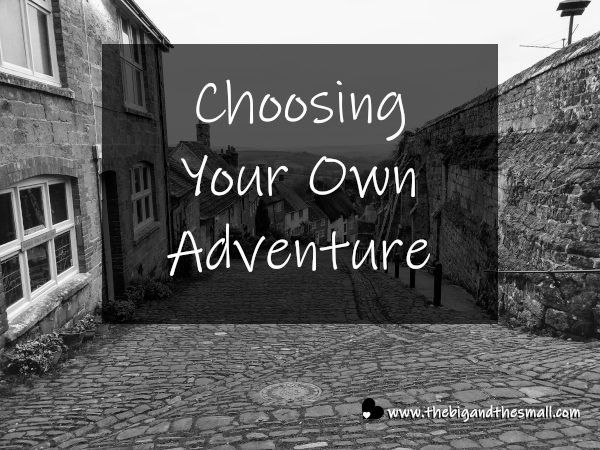 I hated those books.

I know, most people loved them. But for me, they were filled with anxiety and decision paralysis. I was also filled with a drive to know all of the different endings. I had to know all of the possible outcomes, usually, so I could pick the best one and then pretend that’s what I had chosen all along. At one point I ended up reading one of these books page by page from one to whatever even though it didn’t really make sense that way - just so I could be sure that I had seen all the possible endings.

I hated those books.

About two years ago I woke up early one morning with a start - faced with a realization I had come to in a dream - life is basically a choose your own adventure book.

I’m faced with the same need to make decisions that affect the outcome, I struggle with anxiety and decision paralysis - but I don’t even get to read through all the different endings to pick the best one. I just have to make each decision with the information I have at the time and hope for the best.

What a silly system. I want to know all the endings! I want to pick the best one! I want to go back and make different decisions and see how much it affects where I am now!

Think about some of those monumental life decisions we make. You are graduating from High School - what do you do? A. Go to college B. Travel C. Get a job. Ok, I picked A. Go to college. But then there was another choice - which college do you choose? A. An all-girls school in Missouri B. A State School in Iowa C. Something Further Away. I chose A, and then later, before graduation, transferred to B.

That sort of decision making goes on and on in our lives - whether or not I to go to grad school and then where to go, boys I dated and who I ended up marrying, careers chosen, jobs worked and jobs left. All of those big decisions are life-altering - they affect what we learn, who we meet, what relationships we form, and in turn, all of those things affect our lives in major and minor ways.

Just one different decision along the way and I could be in a totally different place than I am right now.

Not that I want to be. I like my life. The way it affects me right now is that I don’t know what I want to do going forward. Now that I have realized that every choice means that I am not choosing something else, I get a little sad and wistful for what might be.

Let me tell you a story that I think will explain what I mean. When we were in Glasgow, Scotland we came across a game store that reminded us of one Joel used to run back home, except it also contained a cafe! I had been brainstorming ideas for a cafe in Europe (it would be called True American and serve quintessential American foods like mac and cheese, biscuits and gravy, etc.) so this seemed like a perfect business opportunity for us. Joel could get inventory from the store he still partly owns, I could run the cafe side, Steve would help us get a space and start a business in Wales and we could all run this game store/cafe and live happily ever after.

It seemed like an awesome idea for about half an hour. Then I started thinking about everything that doing this meant giving up. Running your own business gives you a lot of freedom in that you don’t have a boss holding you to a time card, and yet a lot of constraint in that if you aren’t running the business you aren’t making money. Travel would be hard, going home to see family for extended periods of time would be impossible. The work would likely be fun and enjoyable, but it would take over our lives.

We decided to let that brief dream go, but I put it to Joel like this: “If I had ten full lives to live, I would want to spend one of them running a game store and cafe with you in Wales. But I only have one life so that’s not the right choice.”

I think what it comes down to, for me, is that I wish I had multiple lives to live. Part of me wishes I had stuck with my dance major in college and seen what it would be like to be a professional dancer - what a life that would have been. When I was choosing to go to graduate school I debated between seminary and getting a master’s in library science - what if I could go back and choose to become a librarian instead? I’d love to see where that life would lead me. I could go on and on with the choices I’ve made in the past, and the ones I have to make in the future.

Whether or not to have children is another one of those huge monumental life-changing decisions, which Joel and I are often on the fence about.

Part of why we have held off on having kids is that it is such a permanent decision. When you have a child, you have chosen a path in the choose your own adventure book that you cannot turn back from. You can’t say “whoopsie don’t like this choice after all!” and go back to do something different (as you can with a college major, a career choice, a move, a marriage, or just about anything else.)

We look ahead to a future without kids and it seems pretty great - we have a lot more choices about what we do, where we live, and what we spend our time and money on. But we miss out on a lot, as well - the joy of having children, giving our parents grandchildren, having grandchildren of our own someday, and, of course, who will take care of us when we are old?

We look ahead to a future with kids and at first, it seems pretty tough - friends are always complaining about the amount of poop, puke, and pee they have to deal with, and the incredible lack of sleep. But there’s a lot of joy and love, as well - isn’t it worth some sleepless nights years, to get all that joy and love?

So I end up paralyzed with indecision, wishing I could fast forward to see the two different endings - with kids vs without kids - and pick which one I like better. But I can’t. And if I wait too long to make my own decision, well, mother nature will make that one for me.

I’m not really sure where I’m going with this post anymore except to share my thoughts on choose your own adventure books (hate them) and my revelation that life is basically just a choose your own adventure book where you don’t get to see all the endings. Though don’t worry, I don’t hate life, just the can’t-fast-forward-to-see-the-end-and-then-go-back-and-make-different-decisions-if-I-want-to aspect of it.

Does anyone else struggle with this? Am I completely alone and crazy? It’s okay if I am, just let me know. But if you struggle with this sort of decision making as well I’d love to chat, even if it’s just to commiserate.