The Top 5 Reasons You Should Visit Wales!

I have to say that when we started this European adventure, Wales wasn't really on the top of my list of places we wanted to go. We ended up there because a housesit lined up well with our schedule, and I am so grateful we went there because so far it is my favorite place we've been! So just in case Wales isn't really on your radar of places to visit, today I'm sharing with you my top five reasons for why it should be! 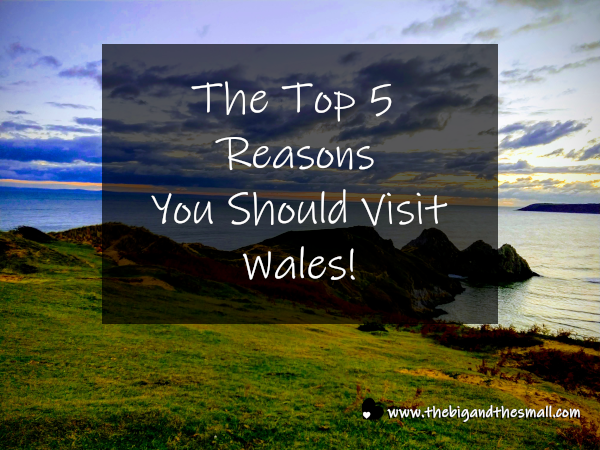 Did you know that Wales has more castles per square mile than any other country in Europe? It's true! We were able to make it to some awesome castles during our time in Wales, and every single one was unique in its own way.

First was the small castle that was within walking distance of us - Oystermouth Castle in Mumbles. It wasn't even open the day we went and it was still worth the trip. Next, we went to Kidwelly Castle with our Australian friend we met on Instagram. Perhaps my favorite one of all was Caerphilly Castle - mostly because they had a Halloween event going on that day. (Plus it was our first real trip with Steve!) And then there was the day we accidentally found a castle when we were out on a hike. We went looking for views of the bay, and while we found them we also stumbled upon the ruins of Pennard Castle.

I'm telling you, the castle game in Wales is strong. No matter where you go in the country you are likely to be near a castle, and you'll definitely want to check it out.

#2. The Coastline & The Gower Peninsula

There are beautiful coastlines everywhere around the world, but after spending 10 weeks in Wales, and specifically 10 weeks on the Gower peninsula, I have to say I have a soft spot for the ones to be found here. I will admit, rather sheepishly, that I used to always associate the beach with hot places - a product, I assume, of visiting my grandparents in Florida every summer when I was growing up.

If you are going to visit Wales, might I suggest that you specifically make it out to the Gower peninsula. Rhosilli Point is the furthest end of the peninsula, and it is filled with gorgeous views, a stunning coastline, and an island you can walk to when the tide is low enough. However, northern Wales is pretty awesome, too, filled with random waterfalls and other coastlines to explore. Basically, wherever you go in Wales, you aren't far from a gorgeous view of the water.

This sounds like small point, but for us, it was a big one. If you keep your eyes open there are tons of public paths you can take that often will give you a shortcut from one place to another - like this one that saved us twenty minutes every time we walked to the grocery store. We often enjoyed just wandering around to see what we could come across when it came to hidden paths. If something was marked with the sign saying it was public, we took it! We learned later from Steve that technically all land is open to the public in the UK, but boy does that go against our American sensibilities. We still don't feel right crossing fences to walk in different areas.

Perhaps my favorite thing we ever discovered on one of our walks was this rope swing in the middle of the woods. It just goes to show you never know what you're gonna find when you get out and explore!

#4. The People & Their Accents

We were able to get to know more people in Wales for several reasons including that we were here the longest and there was no language barrier. (Well, not much of one at least!) In general, though, I think the Welsh people are just incredibly friendly. Every time we were out on a walk people would say hello (or more likely, Hiya!) and even ones we had never come across before would stop to chat for a few. The local church was very welcoming in more ways than I can count, and we even ended up with a good crowd of friends to call our own by the time we celebrated American Thanksgiving.

Also, I love the Welsh accent. It is very lyrical and sing-songy and makes everyone sound very upbeat all the time. I could listen to someone with a Welsh accent read the phonebook! If you are looking for somewhere to visit and you want to make connections and new friends, I cannot recommend Wales enough.

This category is kind of a catch-all, but seriously, Wales is just awesome. Their flag is the coolest flag of all the flags in all the world. It has a dragon on it! The Welsh language is pretty darn cool, too. Check out this post to learn the word for Jellyfish (spoiler alert: it's so much fun to say.) Everywhere you go in Wales, signs and anything with the written language will have it in both Welsh and English. If the English is before the Welsh you know you are in a predominately English speaking area, and if the Welsh is before the English you know it's a predominantly Welsh speaking area.

It's fun to see the Welsh on the signs and try to pronounce it. I'm sure we only got it right about 1% of the time, but it's fun to try. On our road trip, we went to the Welsh town with the longest name in Europe - this one they named such just so it would be a tourist trap. Worked on us!

So there you have it, our top five reasons to visit the fabulous country of Wales! Have any of them convinced you to add Wales to your bucket list? Shout out below!