We are currently living in Street, England, but just a few miles over is the town of Glastonbury. Yesterday we set out to explore the town without much of an agenda in mind, and we ended up learning some fascinating history! 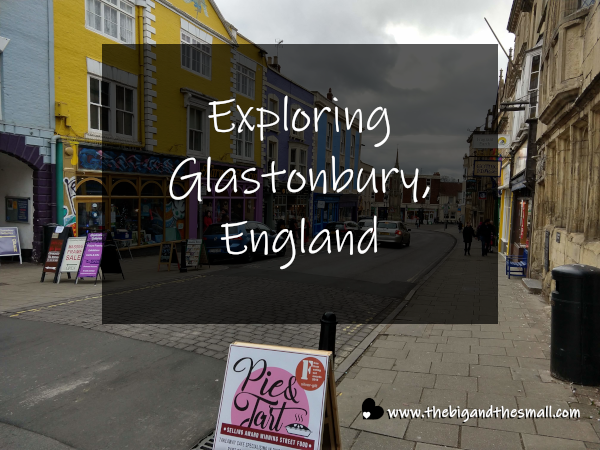 We drove to Glastonbury to fulfill our promise to our hosts to use their car at least once a week, though we could have walked there if we wished, it's less than two miles away. In the States, I don't think Street and Glastonbury would really feel like distinct towns, but here they do! Most places in England have a "greenbelt" law in place around them, which keeps a town from sprawling out past a certain distance. This means that there is almost always open land surrounding a town, which helps to keep everything from running together into one giant place like many places do back home.

The first place we found parking in town happened to be across from the visitor's center so we decided to check it out - and I am so glad we did! The lovely staff person inside gave us tons of fascinating information about the town - I had no idea how much spiritual and religious history was here. It turns out people actually come to Glastonbury to complete a pilgrimage - both Christian and Pagan. We were given this map that shows all the places you can visit. 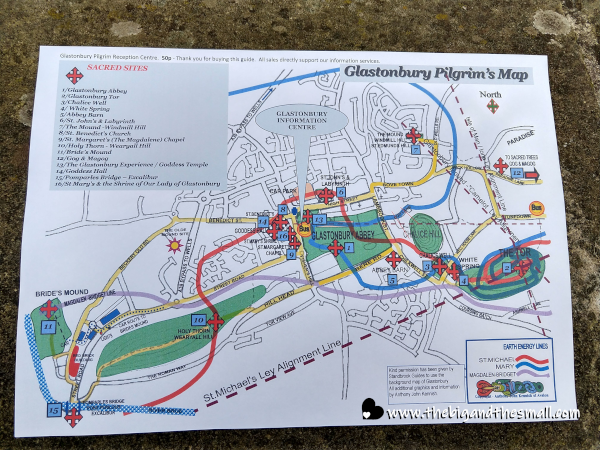 Speaking of maps, one of the pieces the volunteer was most excited about was a copy of an ancient map they recently received. This map was created in the 7th century, also known as a super long time ago. Jerusalem is presented as the center of the map, and most of the world had not been discovered yet. But Glastonbury is on the map! It's hard to see but it's way down in the bottom left corner. I apologize for the light glares on the picture, I couldn't figure out how to get one without those. 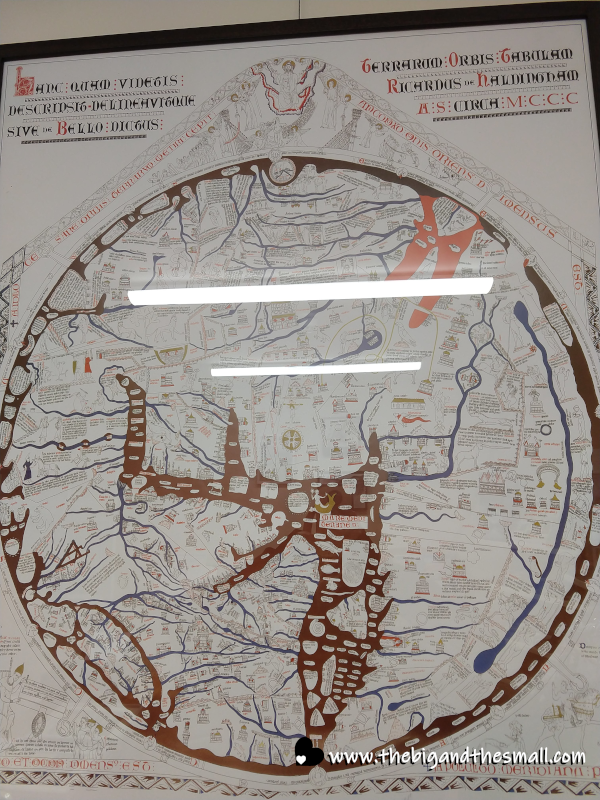 She also spent time showing and explaining the mural that is in the visitor center. It was completed in 2017 and shows the highlights of history in Glastonbury. The far left of the mural depicts the time when most of the surrounding area was underwater; because of this, there were seven sacred islands rather than one big piece of land. The building in the middle of this section is the Glastonbury Abbey, of which the ruins are still here today. So much legend surrounds this place. It is believed that Joseph of Arimathea (from the Bible!) came here after the death of Jesus and began the first Christian church in Britain. Later on, the same site is where the Abbey was built. Then, it is believed that King Arthur and Guinevere were buried here! At the far left of this section is the Glastonbury Tor - the remains of an old tower that sit on the top of the highest land in the area. 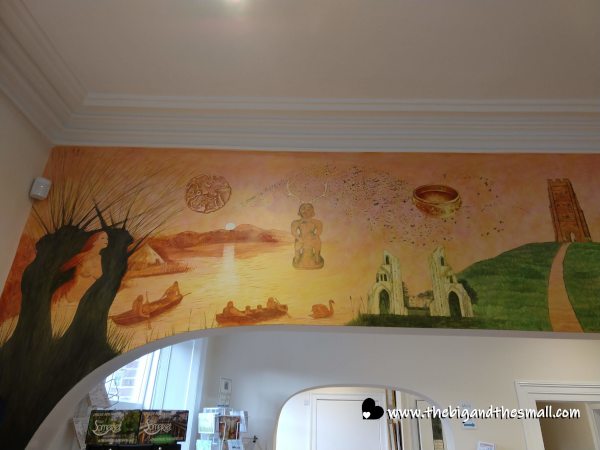 Here in the second half of the mural you again see the tor, and the building at the bottom was the storehouses for the Bishop when the Abbey was in full swing. The building is large which shows how much wealth was contained in this area. The circular symbol floating above is from the chalice well, a sacred site near the Tor, and the cross is the one believed to have been over King Arthur's grave (it says, creatively, Here Lies King Arthur.) The man depicted is Joseph of Arimathea, and the tree on the far right is a sacred thorn tree that is believed to have grown out of Joseph's staff when he planted it in the ground. Unfortunately, the tree was cut down in 2010 by an irate man - though no one knows the real story of just what he was so mad about. 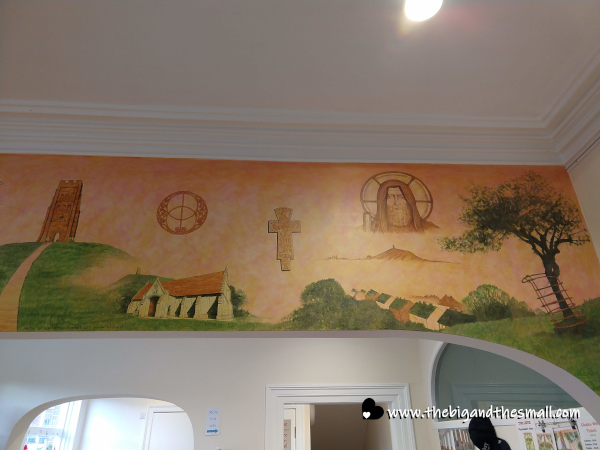 Alright, so, armed with all of that information about Glastonbury we were newly excited to explore the town! We wandered around the high street for a while, popping in and out of shops with awesome names like "Man, Myth, Magick" and "Imp's Toys". My personal favorite probably would have been this one that looked like it was a 24/7 Halloween shop but it was closed despite the very clear open sign. 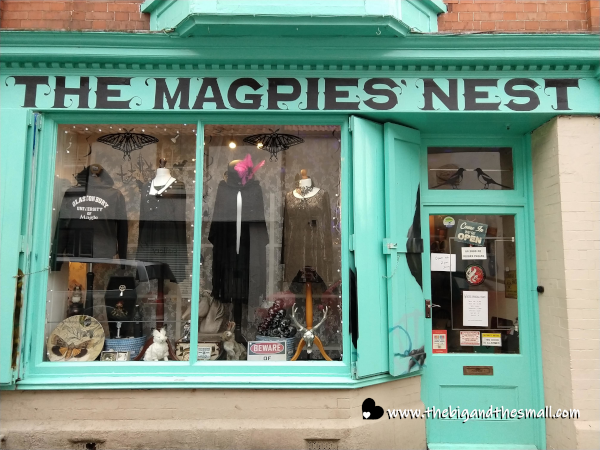 As we wandered we discovered that there were lots of little side alleys that took you into spaces with tons more stores! Our favorite was this one, called "The Gauntlet". There was a plaque on the wall that shared some history about this space. Buildings have been on this site since the 12th century, though it has all been built and rebuilt over the centuries. In 1540 some of it was built with stone that was stolen from the Abbey and some of those stones still stand! The space was turned into what we see today starting in 2003 and completed in 2007. As part of the renovations done then they discovered secret passageways between some of the buildings! 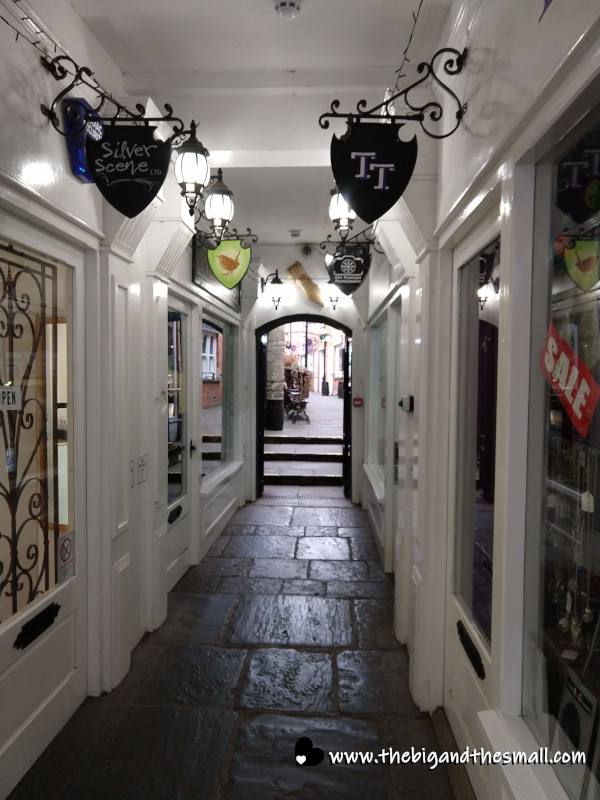 The next side area we found opened up into a square with a beautiful patio (how amazing would this be in summer?) surrounded by bookshops, incense shops, and magic shops. We seemed to have stumbled into an area steeped in the pagan history and spirituality. I will fully admit I do not understand much, if anything, about paganism, so I hope I don't say anything offensive. Despite my lack of knowledge I enjoyed the space and exploring the stores. There did seem to be calm energy about the place. 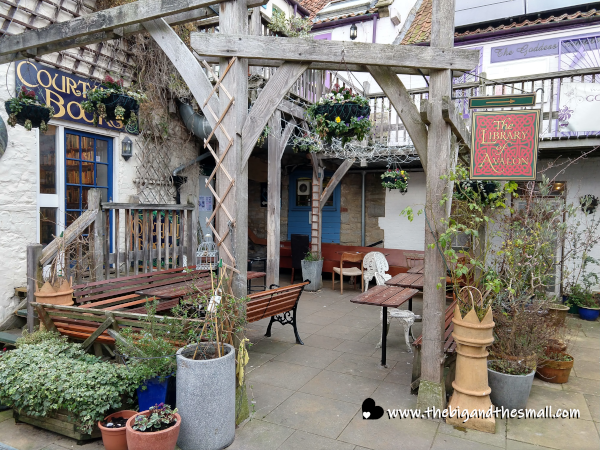 Outside one of the shops was this statue of "The Wise Woman of Wookey Hole" which was created in 1986 (the year I was born.) A quick Google search confirmed that this is the same woman known also as "the Witch of Wookey Hole." We plan to visit Wookey Hole at some point while we are here, so I am excited to learn more about this story! 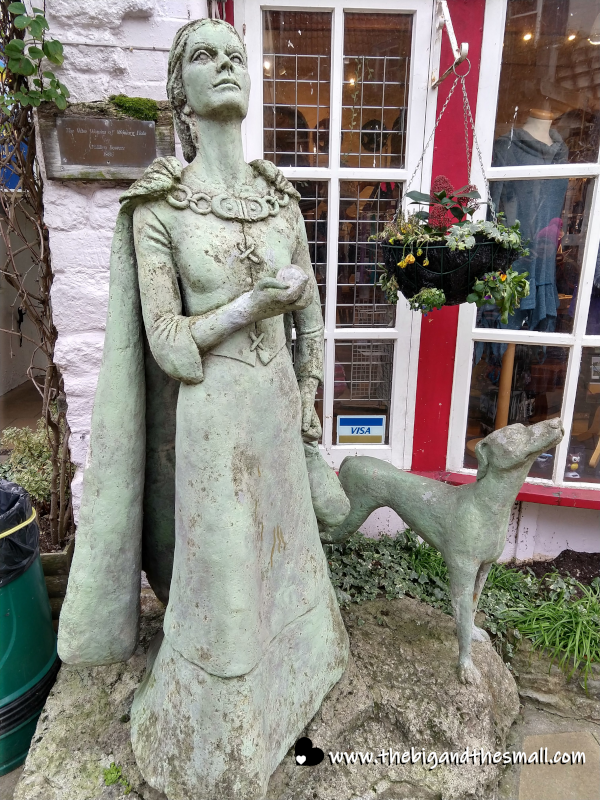 Overall I feel like we just started to learn about all that Glastonbury has to offer. We decided to be done for the day because we realized that with the freedom of the car, we can come back here whenever we want to! I am looking forward to learning more about the legends and lore of this incredible place, and you know I'll bring you all along for the ride.

What do you find the most interesting about Glastonbury so far? What do you want to learn more about? Shout out below and I'll do my best to find us some answers!

Do they also have a map for the Pagan spirituality sites explained like the Christian ones? I want to know more about the other side of the history here. It sounds like it could be an interesting place if these two cultures have been side-by-side (in peace or strife) for history.

On the map pictured the colored lines indicate "energy lines" that are big in the pagan spirituality. I agree that it would be interesting to look into how these two cultures have interacted with each other over the centuries - it is peaceful now but maybe it wasn't always? I'll see what I can find out!