A Walk Through Time at the Shoe Museum

I love shoes. Way back in 2009 I used to have a bit of problem with hoarding shoes - I had well over 100 pairs. That was the year my mom challenged me to go an entire year without buying a single pair of shoes. I managed to complete the challenge and it successfully broke me of my shoe buying habit. Even though I don't really collect shoes anymore (except for my beloved Tieks!) I am still fascinated by them. So I was all over it when I learned there is a shoe museum in town! 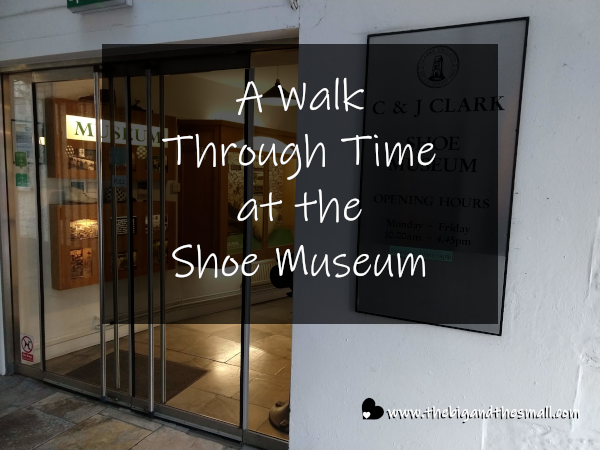 The town where we are currently housesitting is Street, England. It is famous for being the original home of Clark's shoes! Clark's are famous today for being stylish, yet comfortable, sturdy, and affordable shoes. They sell all over the world now and the story started right here in little old Street. The museum tells the story of Clark's shoes, which is in big part the story of the town, while showcasing how styles of shoes have changed over the years. 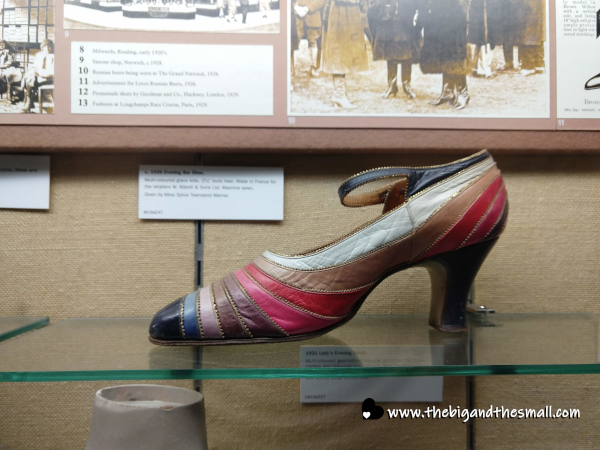 In the first room you enter as part of the museum is a fascinating bit of history about how they used to measure for shoes. In the 1930's through the 1960's many shoe shops used something called a "Pedoscope" which was an x-ray machine! They came with a caution to not have your feet measured more than 12 times a year as it exposed you to harmful x-rays. Can you imagine? An x-ray machine in a shoe store! As an alternative to this method Clark's came up with a "Footguage" that measured people's feet without the harmful technology and is more like what you would encounter in any shoe store today. 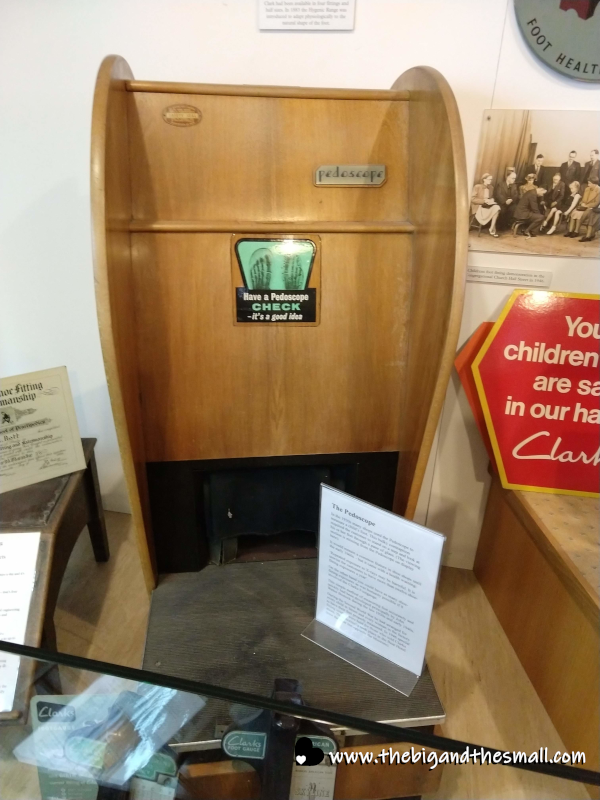 Once you walk upstairs to the rest of the museum, you can walk through displays of shoes that go decade by decade. I will just share with you some of my favorites from our walk through! In the late Victorian period from 1880-1890 we have these high heeled beauties. And when I say high heeled, I mean high! Just look at those! I don't think I wore any heels quite that high even back in my heel wearing days (which I also left somewhere back in 2009). That left shoe would have you practically standing on pointe! 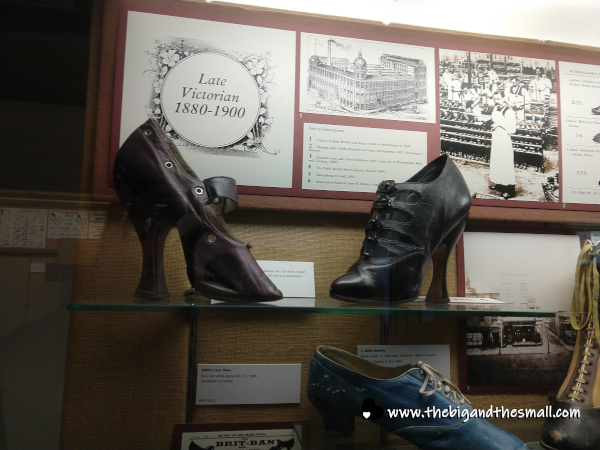 These decorative heels from the late 1920's are amazing. I've always loved the fashion of the 1920's (flappers and speakeasys and prohibition, oh my!) and this just cements that for me. Look at the incredible detail on each heel. I'm not sure what kind of shoe they would have been paired with - hopefully something simple so the heel would be the star! 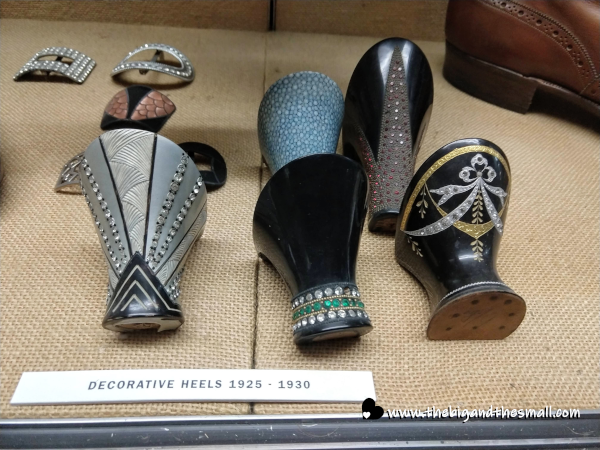 These teeny tiny baby shoes from the 1840's were so stinking cute. I put my thumb in the picture for scale - they were the smallest actual shoes in the whole museum! (There was a section of miniature shoes made for decorations so I couldn't say the smallest of all.) These were actually worn by one of the Clark's himself. 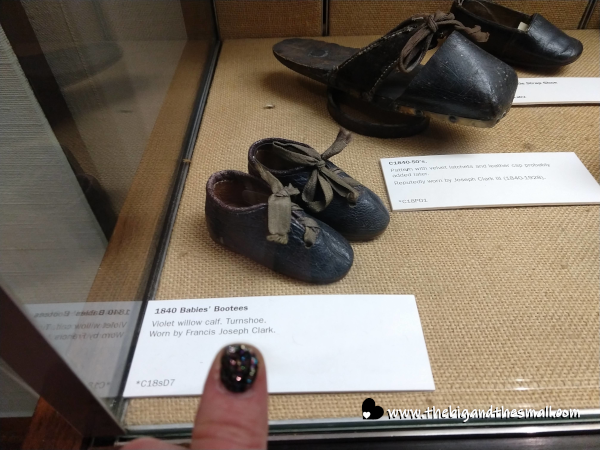 Throughout the whole museum Joel kept urging me to find the pair that looked the most like Tieks. We all know Tieks are a revelation unto themselves, but this is perhaps the closest cousin to them I could find. It has the elastic band, looks like they could fold in half, and is a flat, but not nearly as cute or stylish as our modern day Tieks. These hail from 1959. 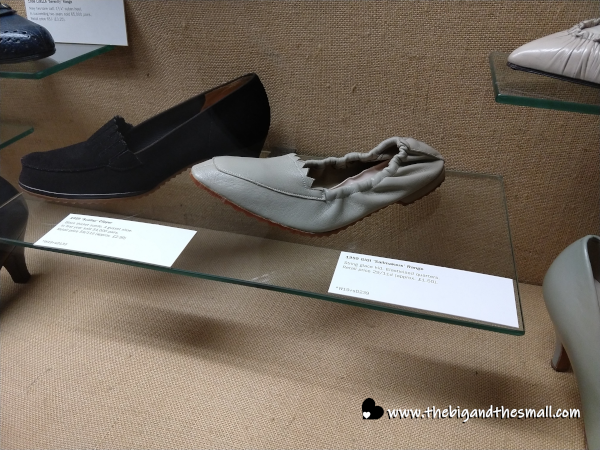 This next display held some of my favorite pairs. There weren't a lot in this museum I would actually want to wear, but several from this batch would make the list. And for good reason too - this display is all the Clark's shoes that were award winning. Starting in 1928 competitions were run by the National Trade Press in order to stimulate and encourage British shoe designers. Prizes were awarded in seven different categories: most original design, design most suited to production on a commercial scale, women's dress, promenade and sports shoes, children's shoes, and best student designer. Clark's designers won in a few categories nearly every year and in 1935 they won in every single category! 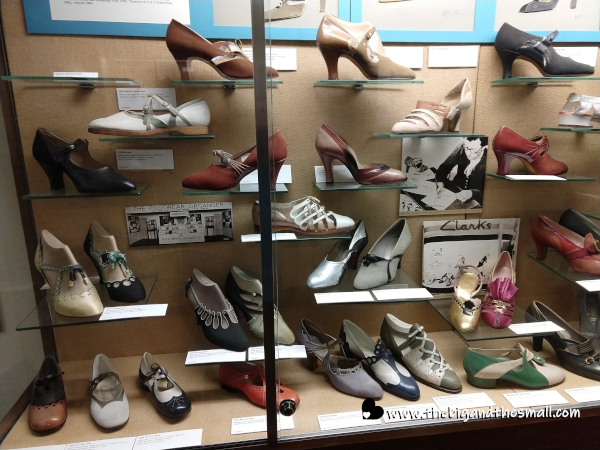 At the modern end of things at the very back of the museum was a display all about the Clark's desert boot that became a major fashion trend. Pictured here is one of my favorite musical artists, Florence Welch (of Florence and the Machine), wearing them at a music festival in Glastonbury in 2015. 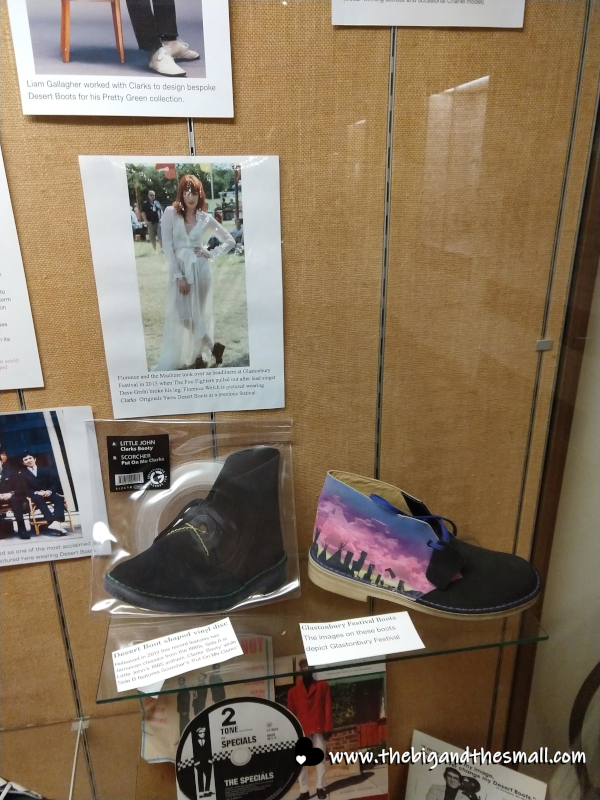 Perhaps my favorite bit in the museum was this pair of red shoes and the story that accompanied them. I had never heard of this Hans Christian Andersen fairy tale about a girl with red shoes that stayed on her feet and wouldn't stop dancing. If you are unfamiliar with the tale you can read a summary of the whole story here. I realize it's supposed to be sort of a warning against being vain about your shoes, but I gotta say, all it made me do was want a red pair of shoes! (And you bet I would wear them to church!) 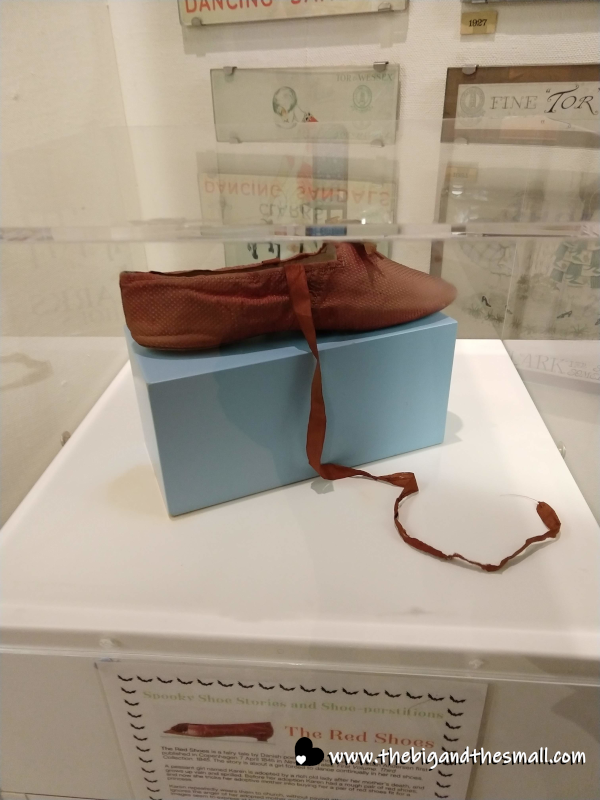 Overall the shoe museum was really fascinating and well worth a visit if you are even in the area. The best part - it's free! Plus there is an outlet mall nearby (with a Clark's store, of course) so if you get the urge to shop after browsing the museum you aren't far from getting your fix.

So what's your favorite shoe of the ones I shared? Any you would actually wear? Do you love shoes or could you not care less? Let's chat!

That made me think of this movie based on the story:

It was on Netflix at one point, and it still may be so you could check it out.

Ooh I'll have to check!

If it's still available we'll definitely have to watch!