Day 14 started off rough with cold and rainy weather that had me wanting to just stay home curled up on the couch with a good book. The guys convinced me to go with them anyway so off we went to Hadrian's Wall, another nearby historical site. 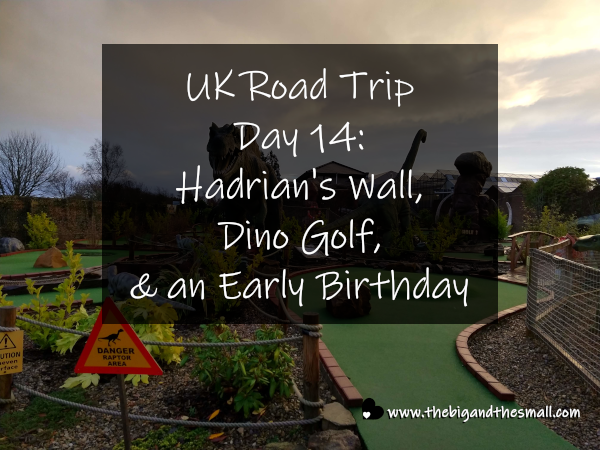 Hadrian's Wall marks the furthest north the Roman Empire made it in their quest to rule the world. The Scottish clans proved too difficult for them at this outpost of the empire, so the Romans put up a wall from coast to coast to separate themselves from the "barbarians." The wall was built starting in 122 CE and a significant portion of it still stands today. 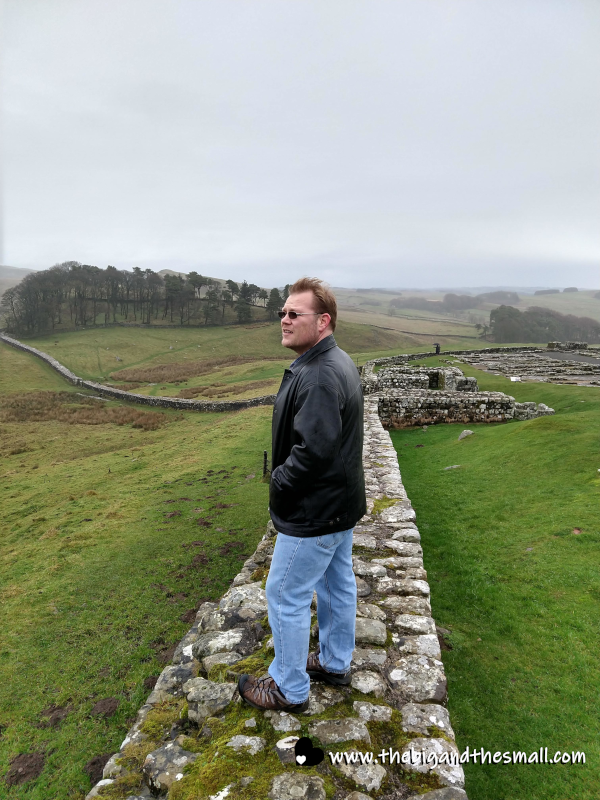 The part of the wall we visited also contains the ruins of what would have been a Roman fort of which the wall formed one side. These buildings would have housed Roman soldiers tasked with guarding this section of the wall and empire. The fort was built in using the template that was used all over the Roman empire, making forts basically the same everywhere. This meant legions of soliders could move in and out of the different forts with ease, knowing they would have the space and buildings they needed in every place. 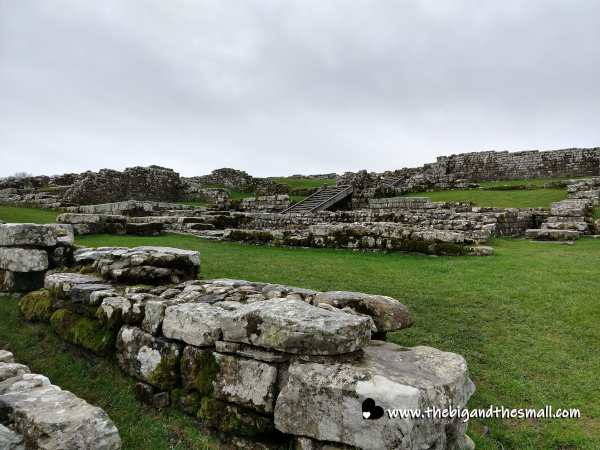 Despite the freezing rain we had fun exploring the ruins and checking out the wall. At one point Joel was taking a 360 picture so he told Steve and me to make funny poses. Steve took this opportunity to dive into a hole in one of the walls and for a moment we thought he was going to end up stuck there. 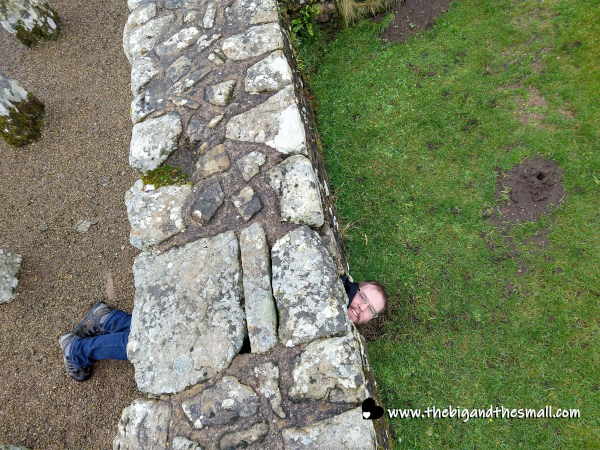 On the long walk back to the entrance to this historical site we passed through some fields containing free roaming sheep. The sheep wander around like this all over the UK and I've always wanted to pet one! Steve tried to do some sheep herding to make my wish come true, but he only succeeded in making the sheep run away from him. The sheep are pretty darn cute when they run so it was a good consolation prize. 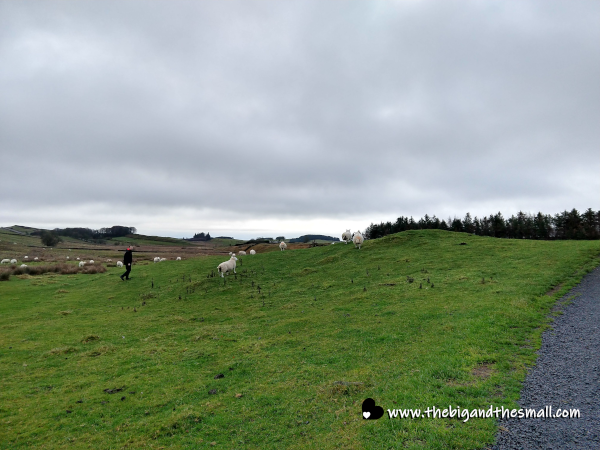 Back in the gift shop the boys couldn't resist trying on the kids helmets and toy swords for a mock fight. I'm sure the staff person was highly amused at their antics. Steve debated buying a recreation of a Roman helmet but we decided it probably wasn't worth £150+ at this time. 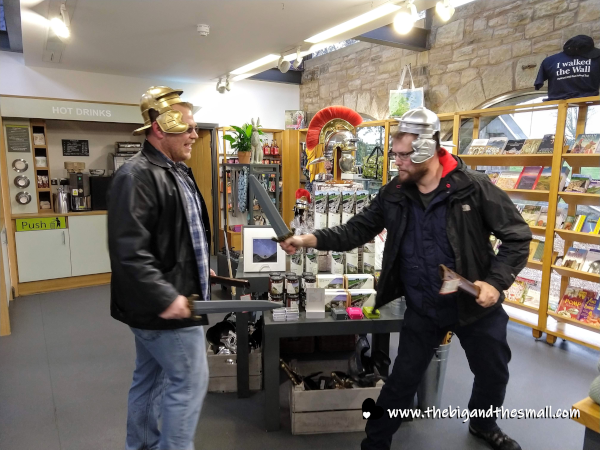 After the wall our plan was to go back to the Air BnB to warm up (and watch more Eurovision, of course) but on the way home we passed an attraction I had seen the other day, and this time Steve stopped! A local garden store called Dobbie's also contained a mini golf course called "Dinosaur Encounter Golf" - I mean, who wouldn't want to stop for that? 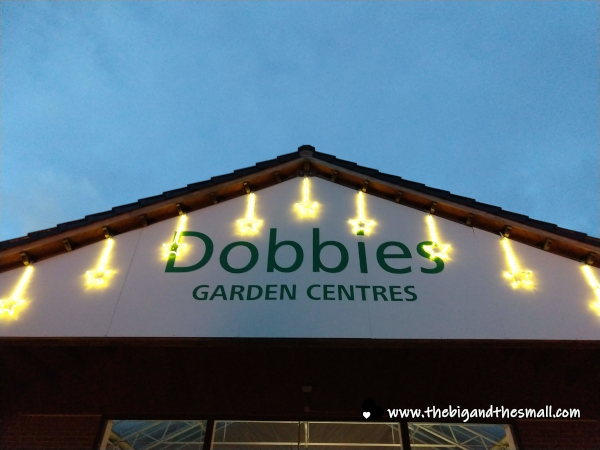 Since it was mid-week in late December we thought for sure the mini golf portion would not be open, and we were correct. However, Joel saw how much I wanted to play and decided to make my dream come true! He asked several employees if they would open it up for us before finding one with enough authority to say yes! I'm pretty sure they thought we were crazy Americans but I was so freaking excited that they were opening up the course just for us. 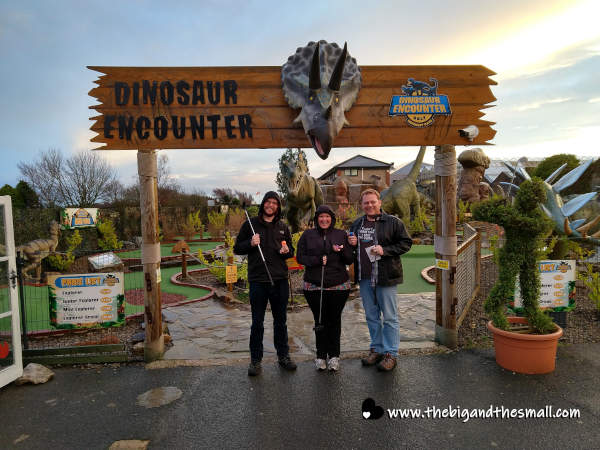 Not only did they open it up and give us clubs/balls so we could play, they turned on all the attractions. I was walking towards this dinosaur for a picture when all of it sudden it came to life and roared at me! I literally screamed I was so startled but it just made the whole experience that much better! 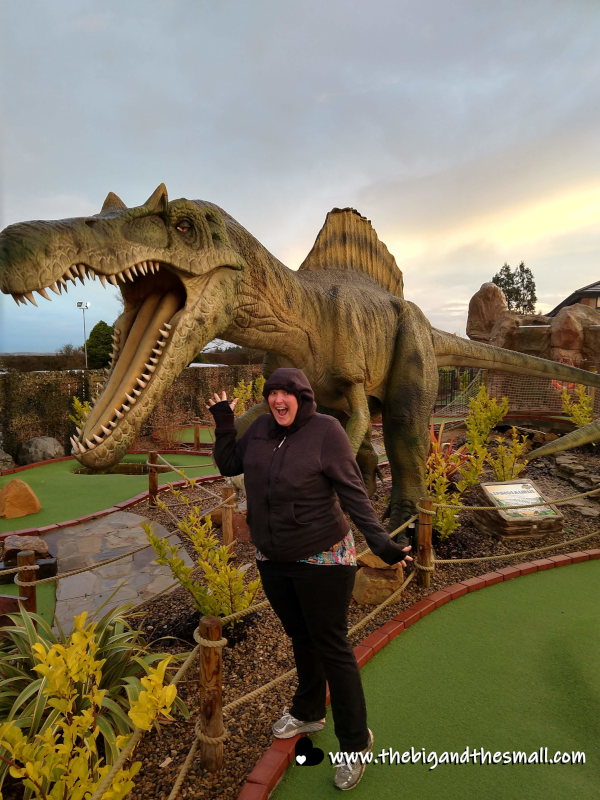 I didn't even care that it was 40 degrees outside, windy, and slightly rainy, this was some of the most fun mini-golf I've ever played. The courses were laid out well and the various dinosaurs placed throughout the park were so much fun. Even if some of them were in really weird poses. 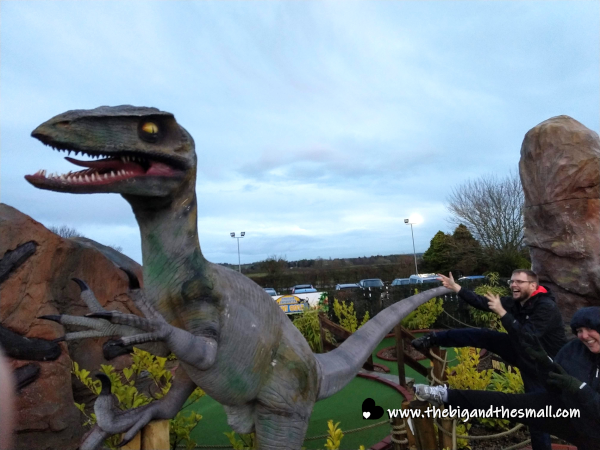 At one point Joel lost his ball in one of the ponds, and he and Steve spent 5 minutes trying to fish it out before I finally went back to the staff person, Paul, to ask for another ball. Paul was so good natured and just kept grinning at how stupidly excited we were to be playing this game. 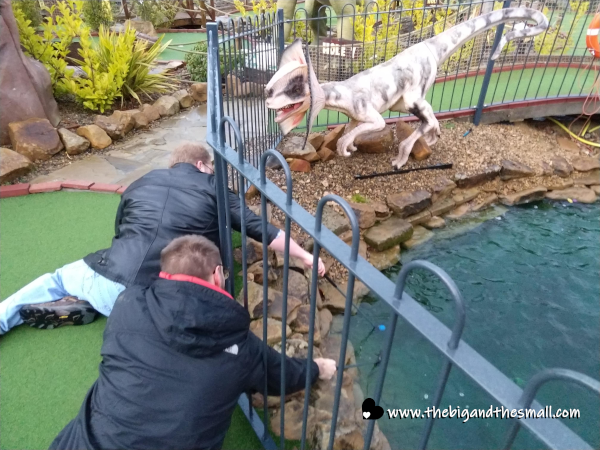 Towards the end it was getting dark and even colder so I have to say I am glad there were only 12 holes to play instead of the usual 18. (Also, for the record, Steve won). Cold and wet but extremely happy we headed back to the Air BnB to make a dinner out of all the food we still had left and celebrate Joel's birthday a little early! Our dinner was a "loaded fries" concoction containing french fries, chicken nuggets, chorizo, beans, and lots of cheese. It sounds weird but it was actually delicious. Just for my own memory I'm going to tell you that Steve and I named our creation "Seiben, Seiben, Einz Fries!" which makes no sense to you (or Joel, really) but makes us laugh to no end. 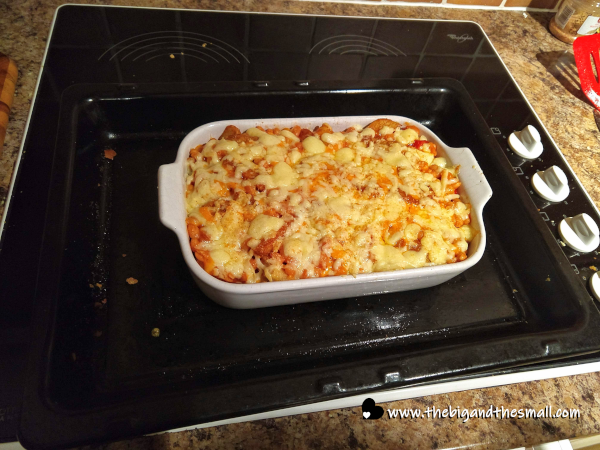 We had also picked up a "Curly the Caterpillar" cake on a Tesco run. This cake is often served at children's birthday parties in the UK so we thought it would be perfect for Joel. This Air BnB even happened to have birthday candles tucked away in a drawer! I did my best to arrange them into a "43". 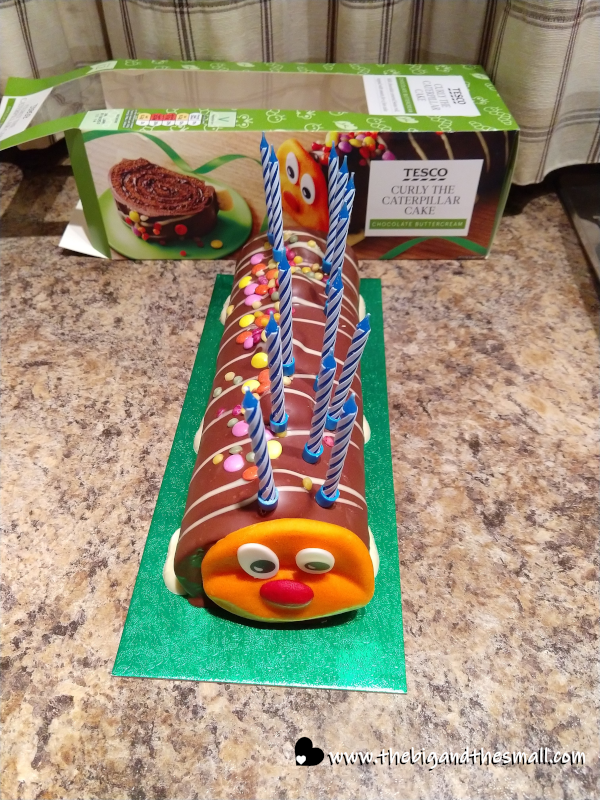 While I got the cake ready Steve wrapped up some presents for Joel and made a card. Our budget for gifts was low (read: non-existent) so we mostly wrapped up items we already had including a box of mini pies, two bars of soap, a small container of peanut butter, and a jar of jam we already had in the fridge. 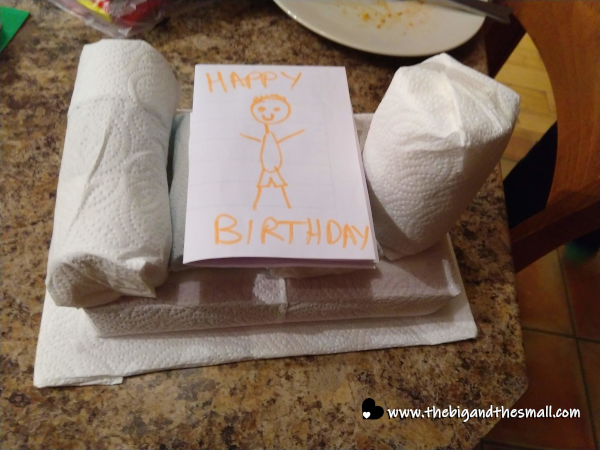 Perhaps the most hilarious present was the single tea bag Steve wrapped up all on its own. 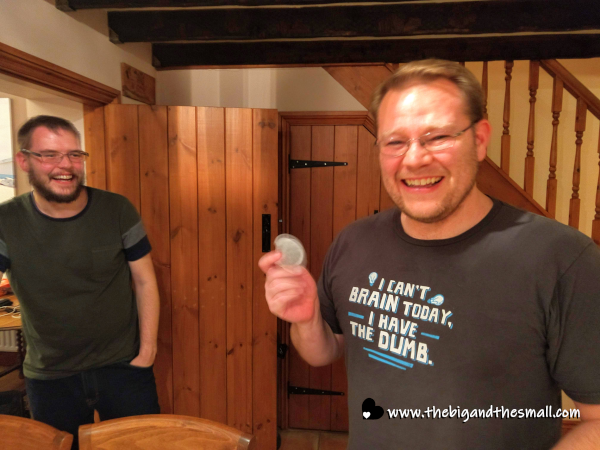 In spite of our terrible presents Joel was touched by our special meal and the birthday cake and candles. After eating we settled in to watch the movie Spy with Melissa McCarthy because it is both awesome and references a Eurovision song! (This one, if you want to watch it, which is also the reference for the name of our loaded fries creation).

Then it was time to pack up and get ready to head back to Wales in the morning! Wah!