Day 13 dawned with some actual sunshine (we hadn't seen any in a while) so it was the perfect day to drive about an hour to Newcastle and explore the city for the day. 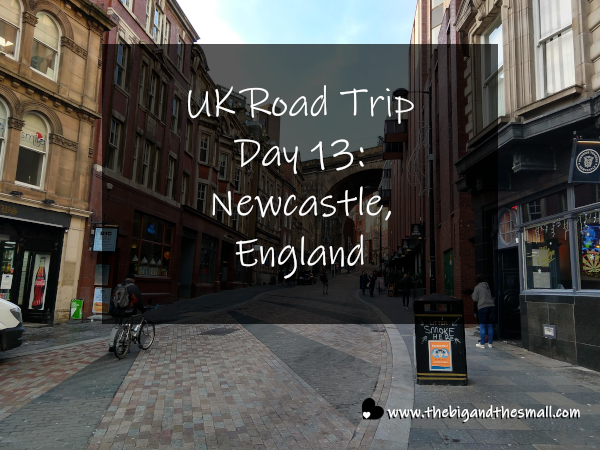 We started by checking out the library - a beautiful historic building filled with books both hundreds of years old and contemporary. I love the hush and sense of peace I feel every time I enter a library and this one was no different. If the guys hadn't been with me I would have been tempted to spend the whole day here, reading. My favorite part - and the part that made this library distinctly British - everyone sitting around reading also had a cup of tea. The library has a whole tea making set up and anyone can come in and have a "cuppa" for free. In the States I've never seen a library that lets you have drinks inside, let alone one that gives them to you! 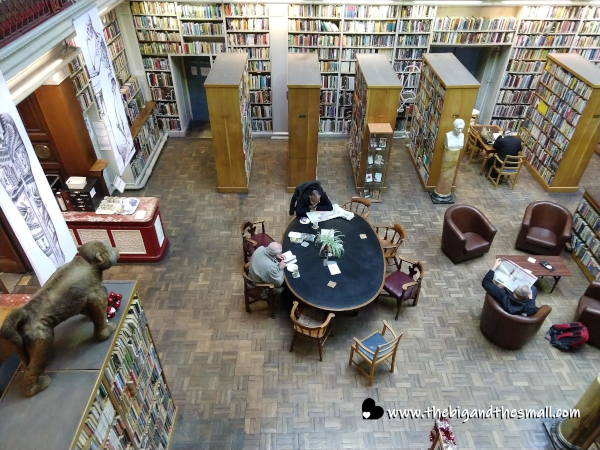 We walked up a spiral staircase to get a better view of the whole place and it reminded me of being back in the theology library in grad school. I found the section I could have gotten lost in for the day - religion and psychology, two of my favorite subjects! Some of these books dated back to the 1800's and some hadn't been checked out since the 1950's. 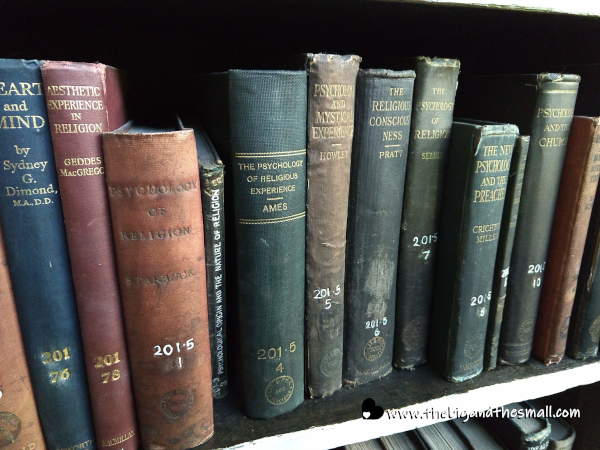 Eventually I let myself be dragged from the warm embrace of the library back to the busy city streets. I was rewarded for my compliance with a hilarious statue of a horse on roller skates. This was at a random pizza parlor and we have no idea if it held any significance other than being awesome. I must note that Newcastle had a ton of pizza places and is quite possibly the best smelling city I've ever been to - it always smelled of some delicious food or other rather than the usual less pleasant city smells. 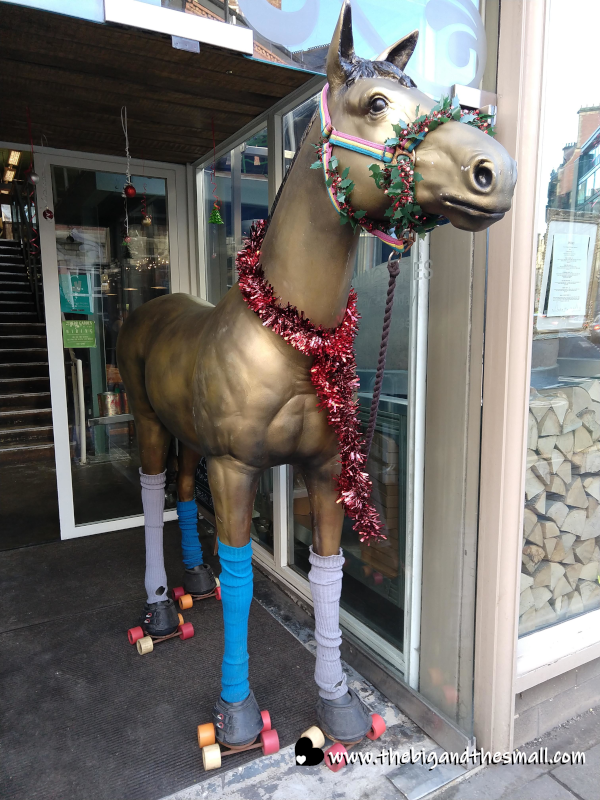 We made our way towards the castle for which the city is named - new meaning it was new sometime in the 12th century. The castle still technically stands, but in the Victorian age it was broken up in the name of progress. Rather than find another path through the city, the engineers built the train tracks straight through the middle of the castle! I suppose it says something that castles were so common around these parts that no one blinked twice at the idea of running a train through one of them. 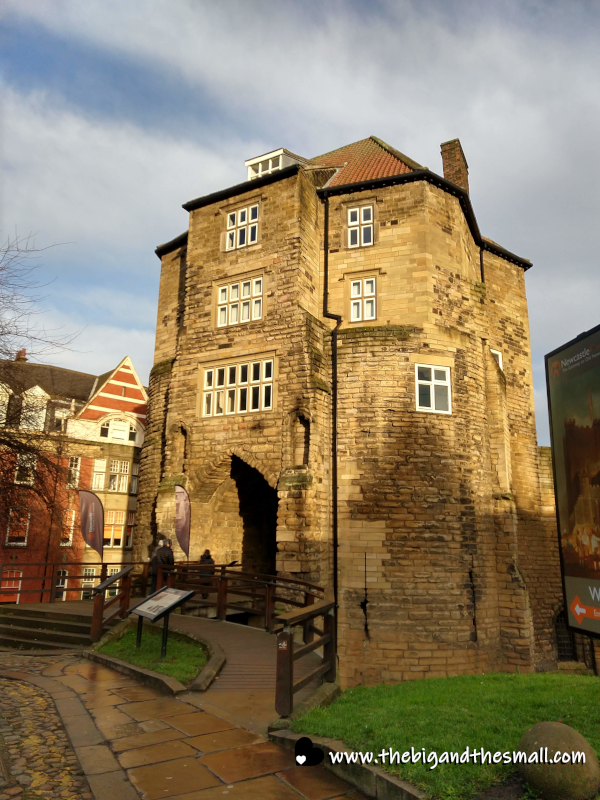 Our winding path then took us down towards the river. The city is often known as Newcastle upon Tyne as it is on the Tyne river. We found a spot that gave us a view of many of the bridges that span the river that divides the city. This one was my favorite. 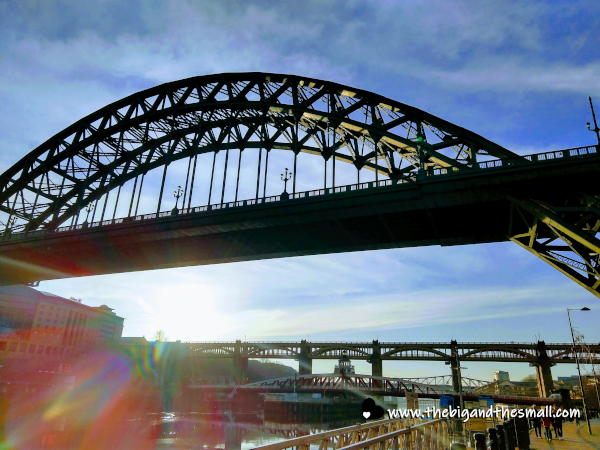 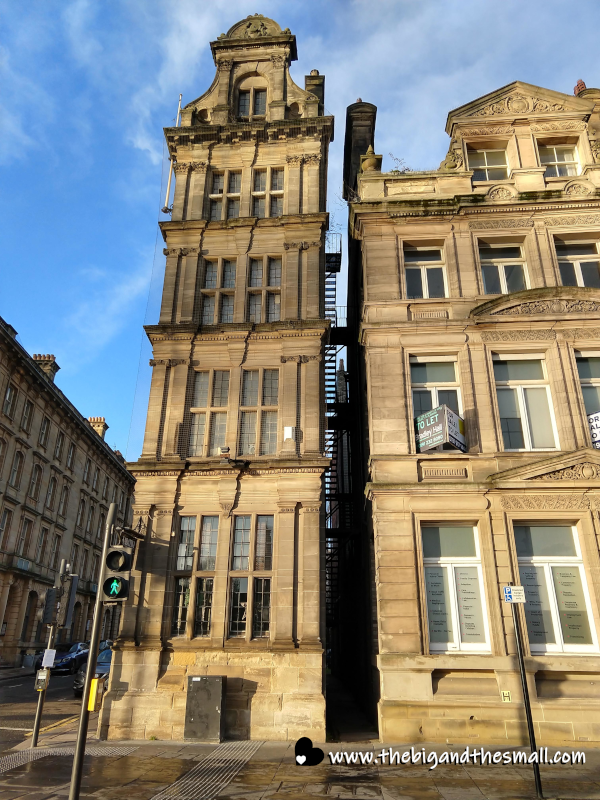 Of course we had to take this opportunity for some "parkour." Steve took the relaxed route. 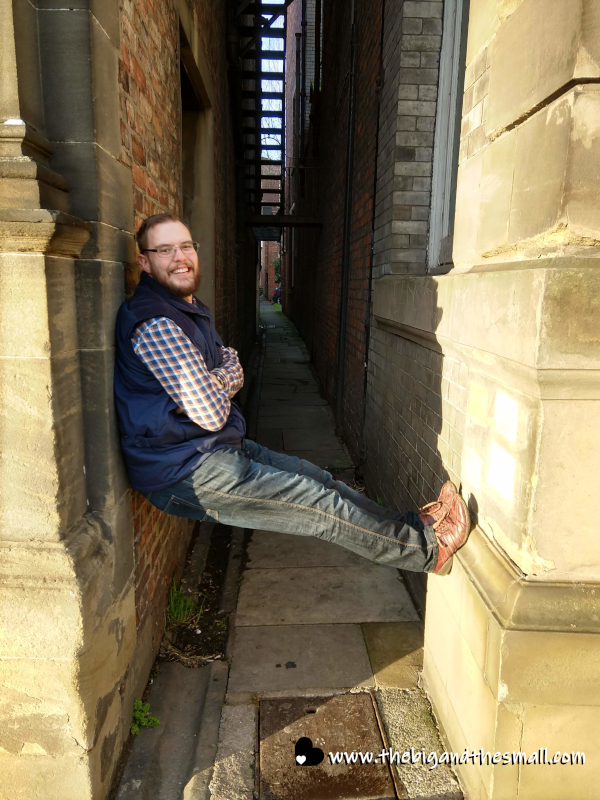 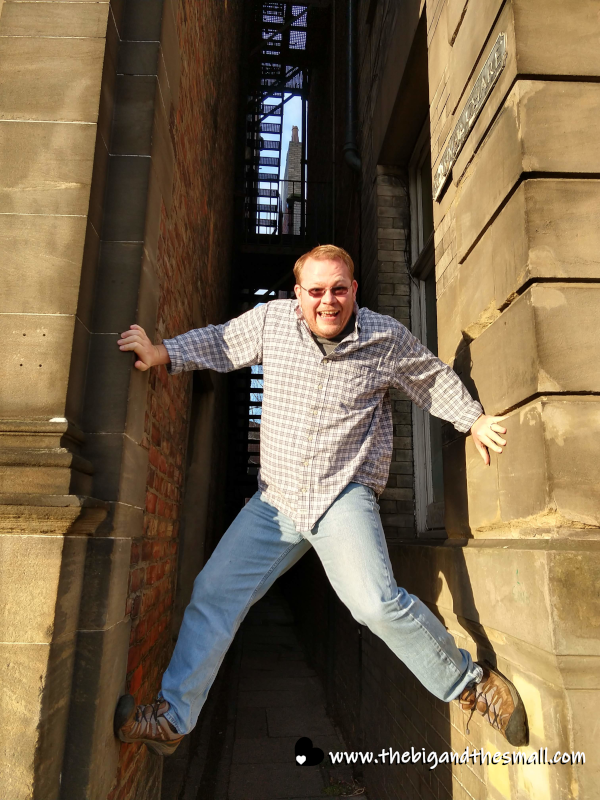 And I was apparently photo bombed by the paparazzi on my attempt. 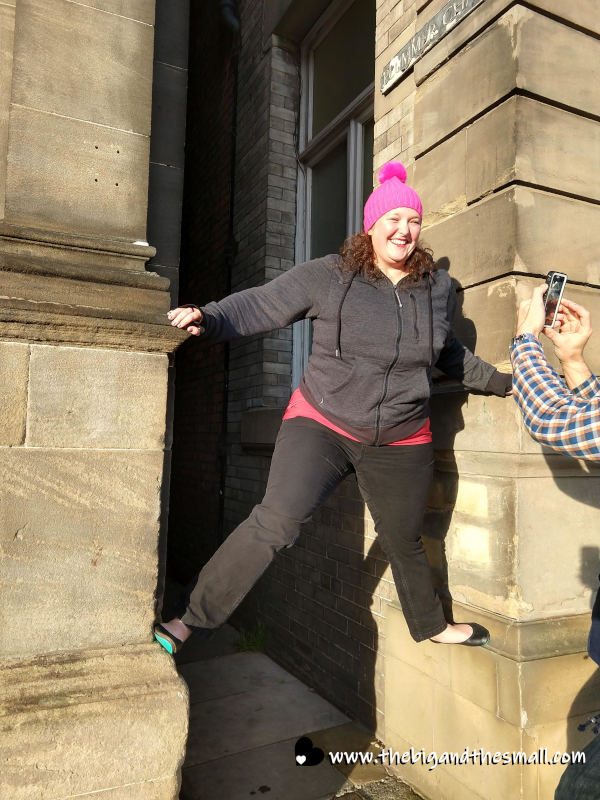 Once we had our fill of climbing the city walls it was time to meet up with Steve's friend Tony. We met at a pub for a chat (so British!) then wandered over to a really cool area known as "The Stacks". What used to be on this block was a movie theater from the 1930's, unfortunately it had been derelict for many years. Suddenly about 18 months ago the theater mysteriously "fell down" (Tony's words). Rather than let the spot sit destroyed or merely empty, the city authorized the building of the stacks - a developer took old shipping containers and turned them into this hub for food, music, and nightlife. In the tent you see at the back is a bonfire people can gather around for warmth. 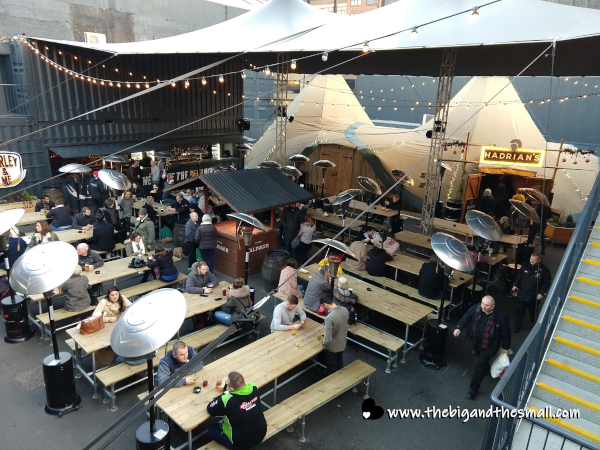 There are cheeky decorations all around the place, this one in particular made me chuckle. 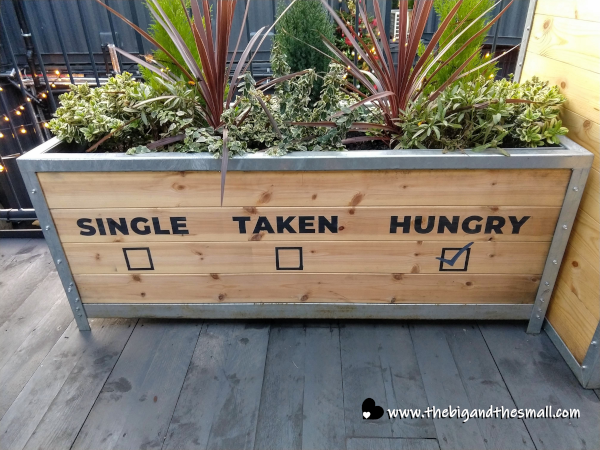 We grabbed some food from a couple different vendors (all delicious) then sat on the upper deck to enjoy each other's company and the live music. We passed a lot of time here and could have stayed all night! Joel declared Newcastle his favorite city and that is a big deal considering that, in general, he hates cities. 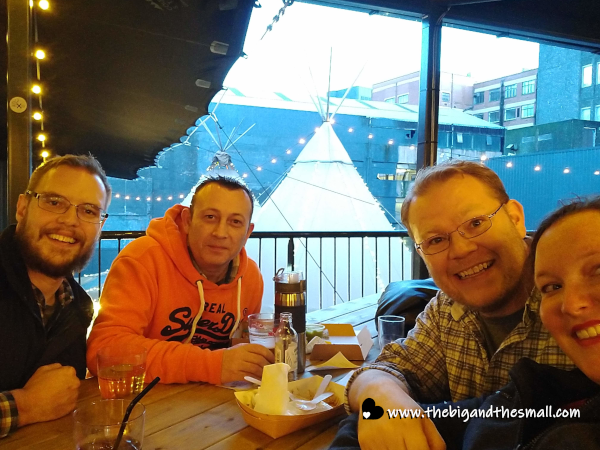 When it was time to move on we wandered through some of the shopping district. At a party store I found the confetti I need for New Year's Eve (just wait and see!) but not the headgear I've been looking for. In between popping in and out of shops we enjoyed some really festive Christmas windows. At one point we came across a street performer doing fire tricks and watched him for a while. This random entertainment and community is one of my favorite things about cities and it was worth standing in the cold to watch him do his thing. 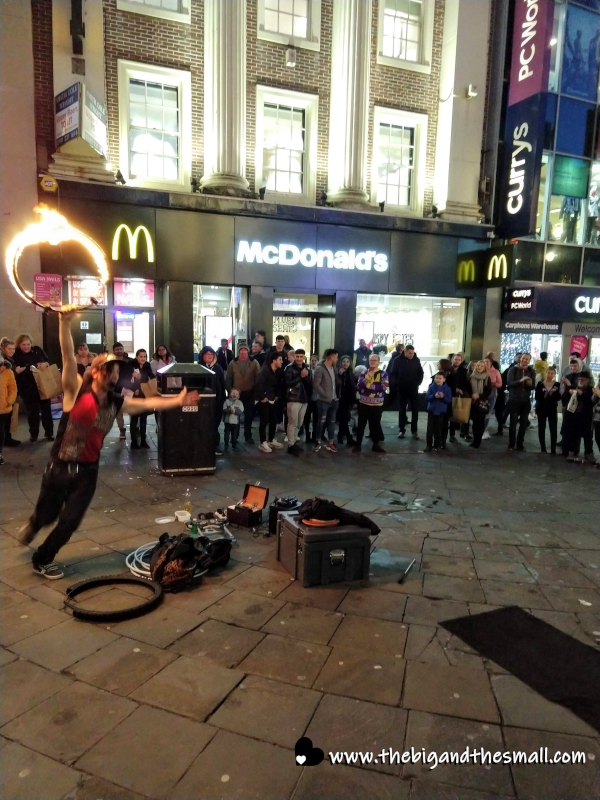 I love seeing where people live so when Tony offered to show us his flat in the city center I was all about that. He's right next to a new complex with a state of the art movie theater, restaurants, and tons of games just out and available for use, including what I'm inclined to say is the world's largest foosball table. I didn't take any pictures of his apartment but it was the top floor of a building and amazing (and we were shocked at how affordable!). 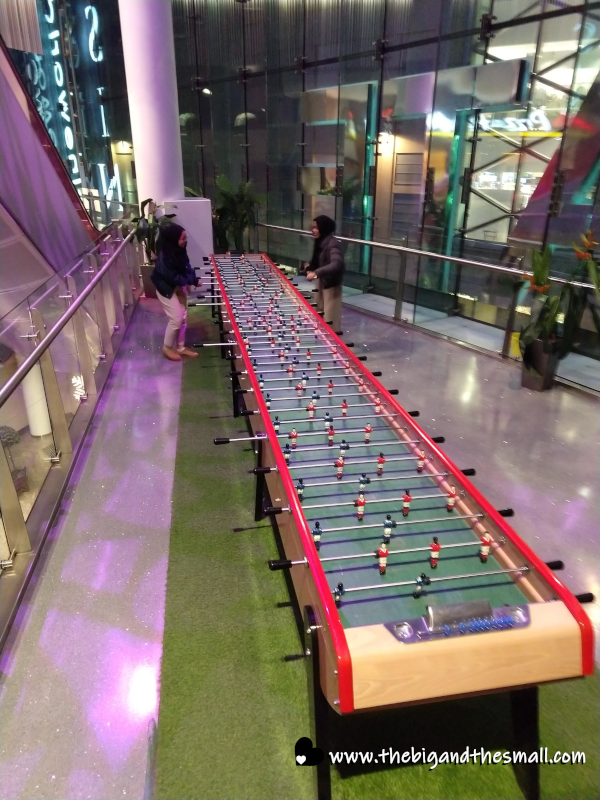 At last it was time to make our way back to our car and fight rush hour traffic to get back to our Air BnB. Then the night was spent watching more Eurovision! (I told you we've become obsessed). Stay tuned for day 14 tomorrow!