On Day 11 we got up bright and early so we could head out from our Air BnB and make the move from Scotland to England. Most of this day was spent in the car so I'll spare you the riveting details of Steve's longing for a burger van (never did find one), how I made us stop at the last grocery store in Scotland so I could buy them out of macaroni pie (true story) and Joel stayed happy as a clam in the backseat with his phone game. We did, however, make one very interesting stop on the way, at Holy Island! 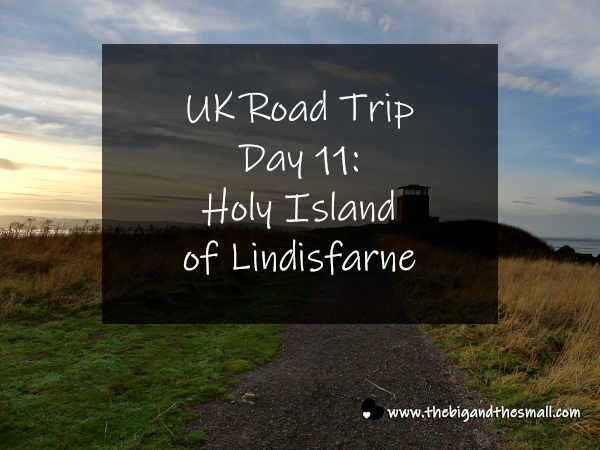 The Holy Island of Lindisfarne is fascinating for several reasons - the first of which is how you get there. You can actually drive (or walk if you are really brave) out to the island, but only at low tide. When the tide is in the road is literally underwater! As you drive along the road to get there you can see that on both sides of you are pure sand and seaweed and it is very easy to picture all of it covered in water instead. 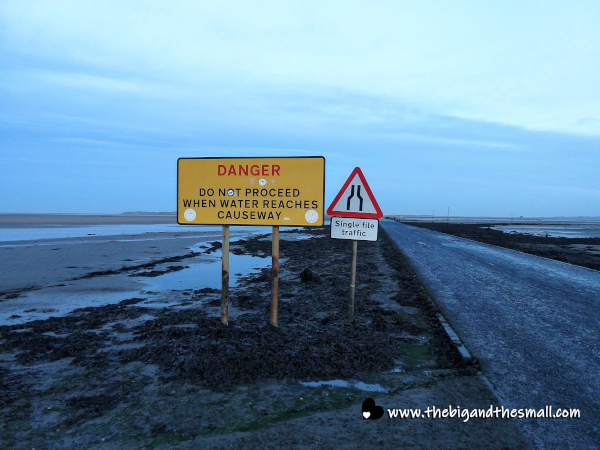 As you continue there are some points that have small buildings on stilts. Those are there just in case someone gets stuck! Your car might be out of luck but at least you could get up out of the water. In order to avoid this fate you must pay close attention to the timing of the tides. They have a big chart in the car park on the island telling you when it is and isn't safe to cross, and of course there's always the internet. 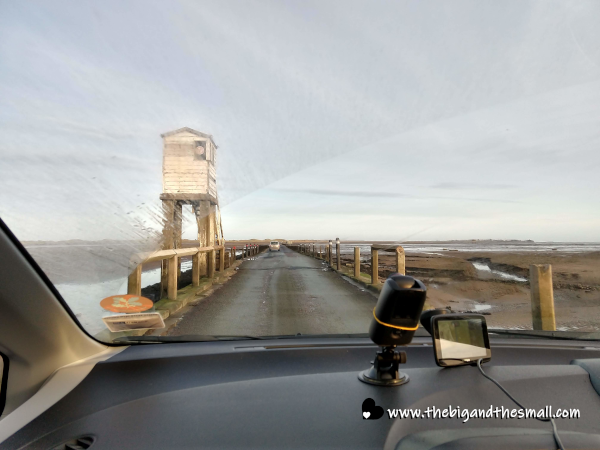 Once you made it safely to the island there is plenty to wander around and see. The town is still active and thriving and people actually live on this island! Can you imagine living somewhere you could only drive to at certain times of day? If you think it's difficult to run errands or get to a doctor's appointment now, imagine the tides having a say in what you can do and when! After walking through the small town we spotted the castle on the hill that was built in 1550. Unfortunately it was closed for the season so we didn't get to go see it up close. 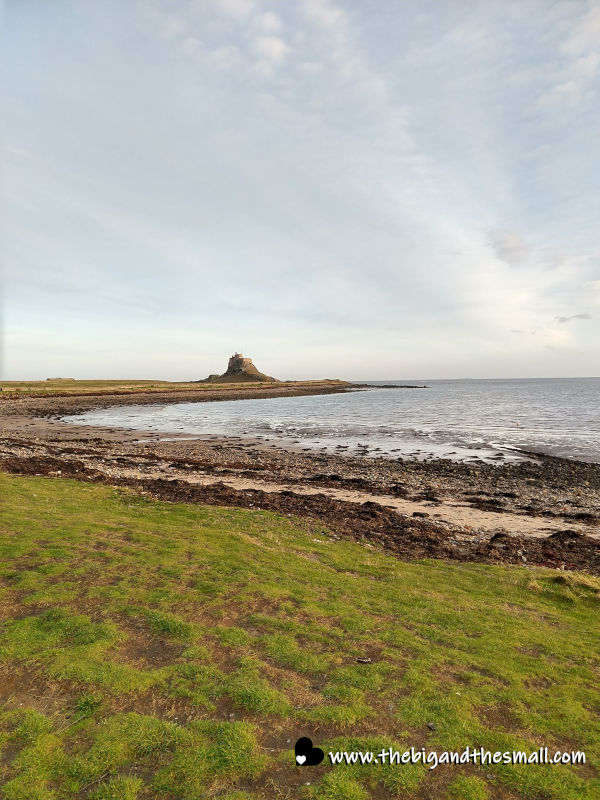 We did explore the shoreline a bit where Steve found this giant stick to play with - I think he was hoping for another stick sword fight with Joel but this weapon was a bit too much for him to handle. As we walked along the water I was struck by how much the smell of the sea air and the sound of the seagulls reminded me of visiting my grandparents when I was little. They lived in Florida so salt water and sand always remind me of them, though to have those memories pop up when I am freezing feels incongruous as Florida was always hot! 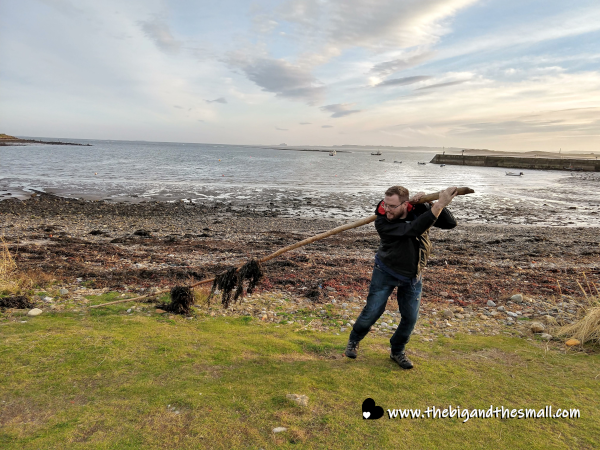 From the shore we walked up a steep hill and found a high point with an observatory so we could get a better view of the whole island. The sun was close to setting so the view was stunning. Here we learned a little more about the history of the island. The island has been settled since the 6th century CE. In 634 a monastery was founded by Irish monk Saint Aiden and the island became an important base for evangelism in the area. Here is a view of the ruins of the monastery from the observatory. 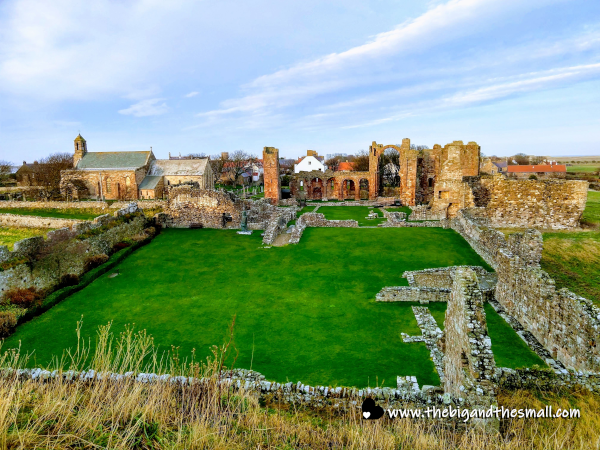 The monastery is in ruins because the vikings came in 793. Recorded writings from the time show how terrifying the Viking attacks were, describing the attacking force as coming with "excessive whirlwinds, lightning, and fiery dragons seen flying in the sky." I'm sure the Vikings didn't have actual dragons, but some of their advanced fighting technology sure would have seemed magical or mystical. It's hard to believe such violence occurring in such a beautiful place. 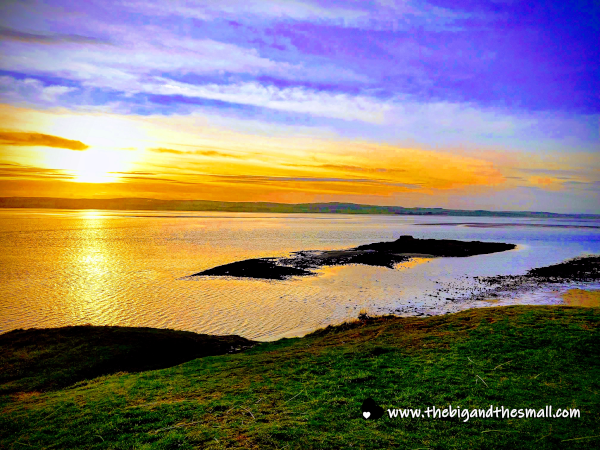 When we came down from the observatory we went to explore the monastic ruins, only to discover they we also closed for the season. The bit we could see through the metal gate was pretty amazing, and I was able to snap a few pictures as well. 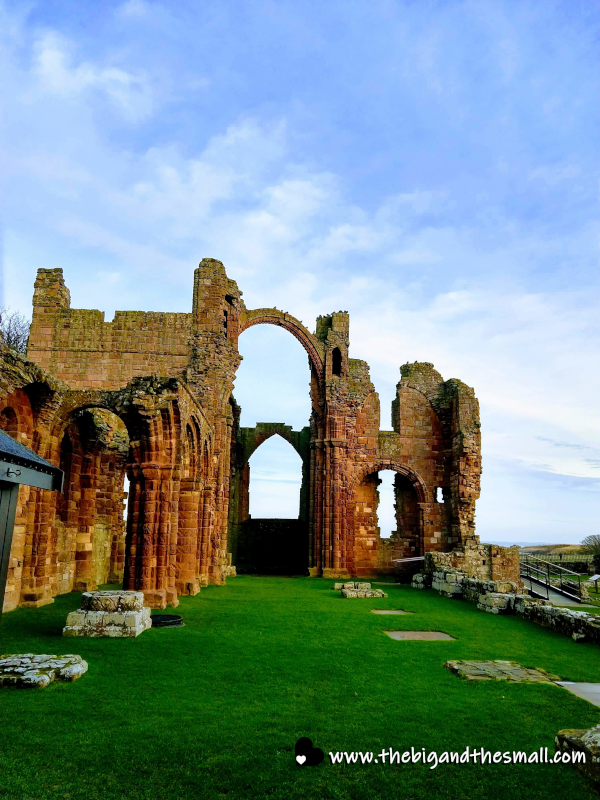 We did get to explore the church next to the ruins, which I believe is the oldest building on the island that still has a roof on. It is also still an active church with worship every Sunday and various activities throughout the week. I love the idea of worshipping (or leading worship) in a place with so much history behind it. 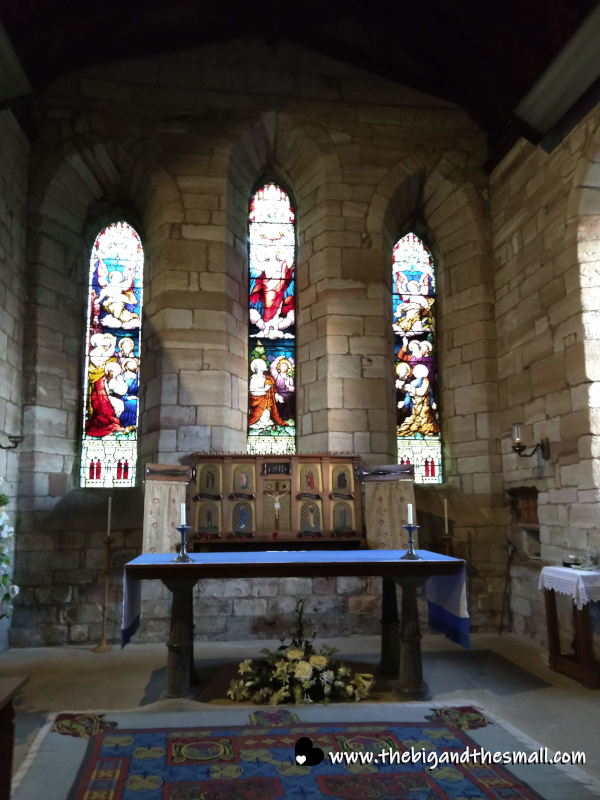 After all our exploration in the wind and cold we were hoping to grab a cup of something warm at a cafe, but like the castle and the monastery most places on the island were closed for the season. I can imagine the island teeming with visitors in the summer, but apparently the middle of winter right before Christmas is a slow time. So we headed back to the car and soldiered on to our newest Air BnB instead.

Steve really saved the best for last when it came to our accommodations as this one is amazing! It's in the country which is a bit inconvenient, but it is peaceful and beautiful. The cottage we are renting used to be a barn and has been converted into a contemporary living space with a nice sized kitchen, living room, two bedrooms and two bathrooms. It even has two good showers! (Good showers have been a rarity in our time in Europe so far). Our group selfie of the day was taken on the king size bed in one of the rooms after we all tested out how super comfortable it is. 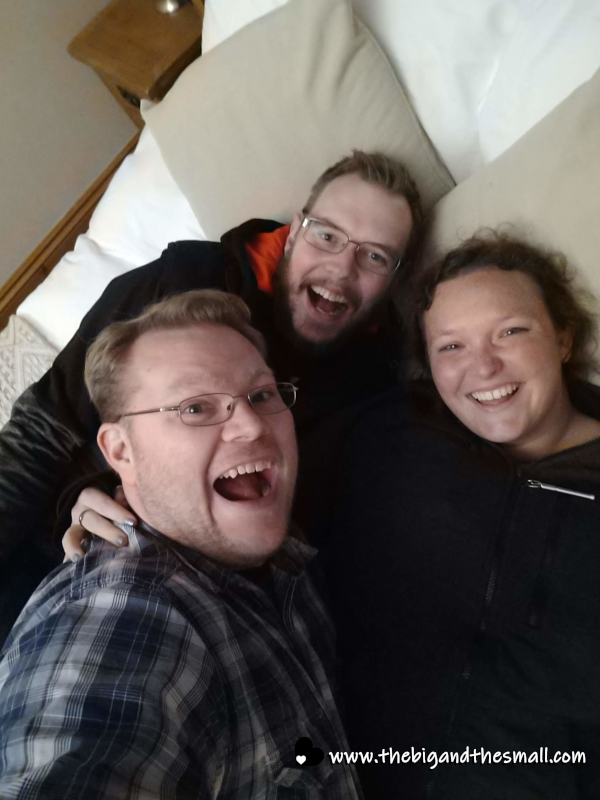 At the beginning of the trip we said that at the end of these two weeks the three of us would either hate each other or be friends for life - I'm pretty sure a selfie on the bed indicates we have hit friends for life stage. The rest of the evening was spent making dinner and letting Steve get us hooked on one of his hobbies/obsessions, which I will share all about with you tomorrow!