My original plan was to write a blog post for every day of our UK road trip. But then we had a really lazy Saturday on day 9, and Joel convinced me I should squish the weekend into one post. Lucky for you as you now don't have to read a lengthy post about how all day I sat at my computer writing, Steve took measurements of non-existent snow while listening to Albanian music, and Joel got obsessed with a new game on his phone to the point of never leaving the couch. We did watch the movie Dumplin' in the evening and it was amazing so be sure to check that out. Other than that, let's skip ahead to Sunday, day 10! 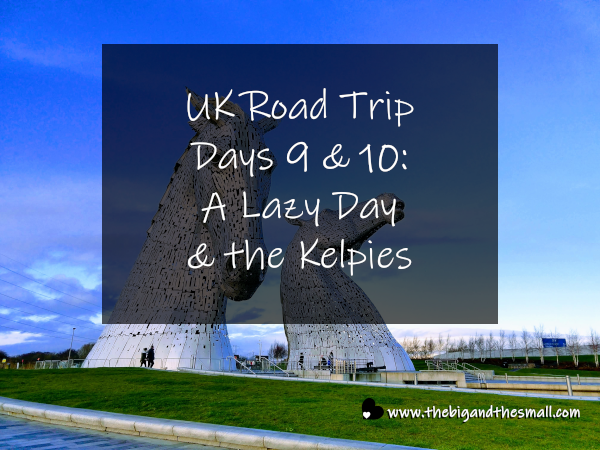 Part of the reason our Saturday was so boring is that the weather was terrible and made not leaving the house seem like the better option. Instead of the predicted snow we got freezing rain all day long and then finally around nine o'clock in the evening we got a little bit of snow. Which means that the snow was falling on ice. Which means that it was really yucky outside and the roads were fairly treacherous until things had time to thaw on Sunday. All of this is my really long-winded explanation for why we didn't find a church to go to on Sunday morning - we didn't want to drive on the roads until they had time to clear.

When we did finally head out we drove towards Falkirk to see the Kelpies, and to another town called Bo'ness to meet up with some of Steve's friends. On the way there we stopped for some picture opportunities (of a castle too expensive for us to actually visit) and Steve came back to the car with a present for Joel... a snowball to the face! 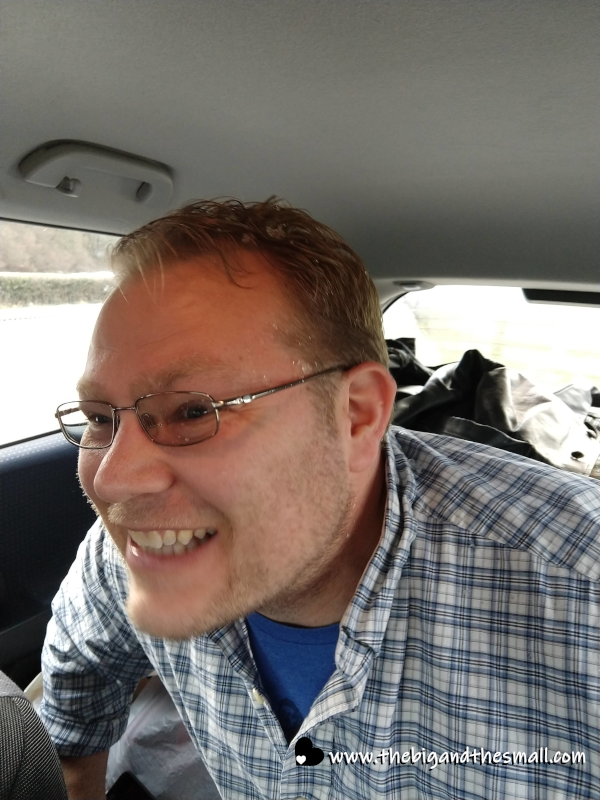 Our decision to go to the Kelpies was kind of last minute, when Steve realized they were mostly on the way to his friends house. I've seen pictures of them before and strongly desired to see them in person and I am so glad we did! Here's your heads up now - the rest of this post is filled with a ridiculous amount of Kelpie pictures. 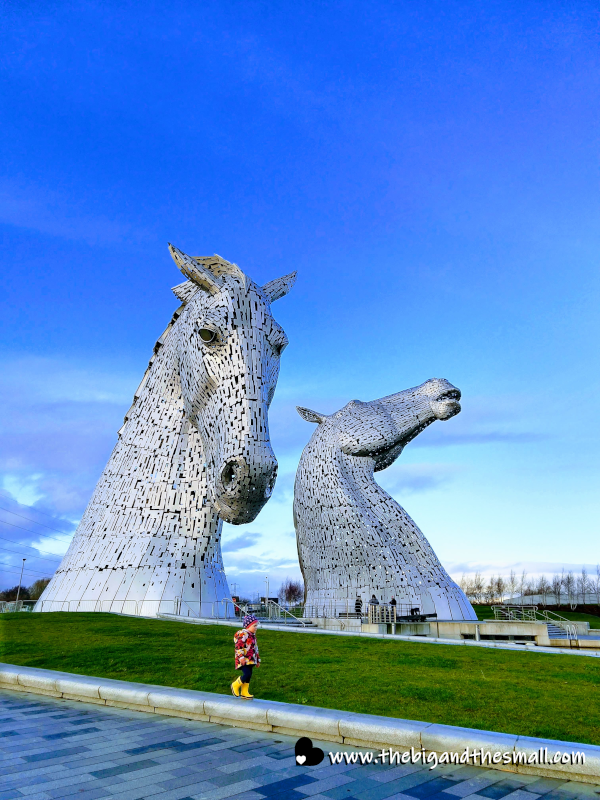 Kelpies are mythological creatures believed to inhabit the lochs and pools of Scotland, and almost every Scottish body of water has a Kelpie story associated with it. These shape-shifting water spirits most often appear in the form of a horse, possessing the strength and endurance of 10 horses; they can appear human if they wish, but they retain their horses hooves at their feet. They are mischievous and the stories of Kelpies served as a deterrent for small children around water, and warned young women to be wary of handsome strangers. 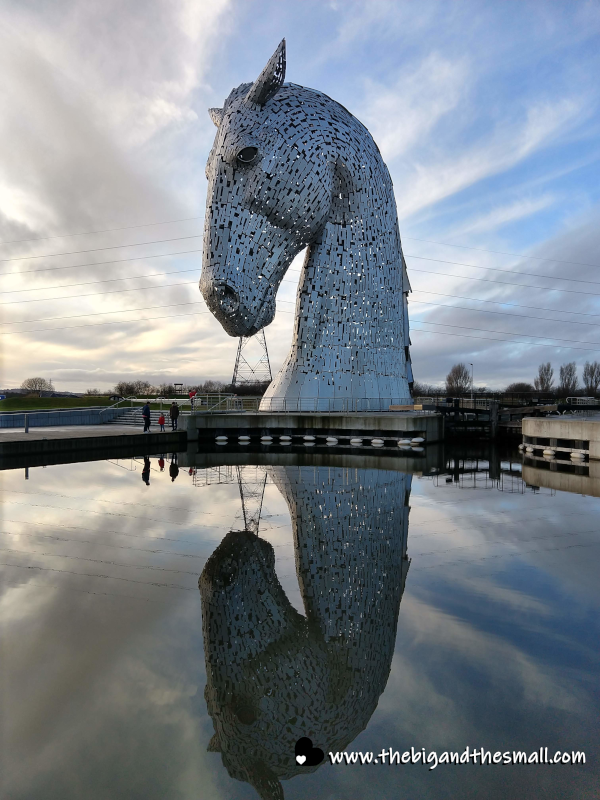 The statues themselves stand at a gateway to a new canal extension built as part of a land improvement project in Scotland. They serve as a reminder of the transformation Scotland's inland waterways have undergone to endure the changing times. They also stand as a monument to the role of actual horses in Scotland's history of industry and agriculture. 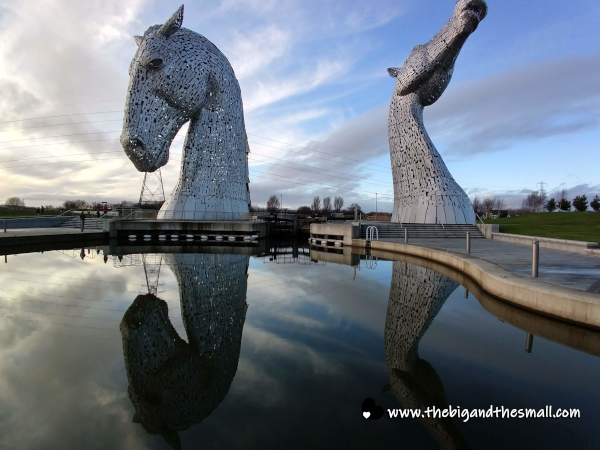 Actually seeing these in person was amazing, the pictures hardly do them justice. The two statues stand 30 meters high (around 98 feet) and weigh 300 tons each. The sculptor is an artist by the name of Andy Scott, and it took him many years to bring the project from conception to completion. He first built miniatures of the statues in 2008, the real life ones were completed in 2013. 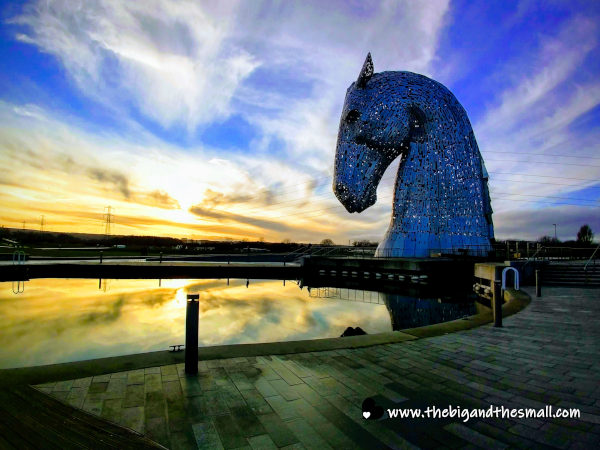 I could go on all day about the Kelpies but we didn't spend our entire day there. Eventually we moved on to a town called Bo'ness for a visit with some of Steve's friends - a couple he had also met while volunteering at a Christian Retreat House (that's also how we met Steve!) We first met up with them at the train station in their town - it's the big attraction and a Santa train was getting ready to leave the station! It was fun to watch the steam trains get ready to go and see all of the excitement on the kid's faces. This blue train is supposed to be Thomas the Tank Engine but due to copyright laws and subsequent expenses he only gets his face put on a few times a year. 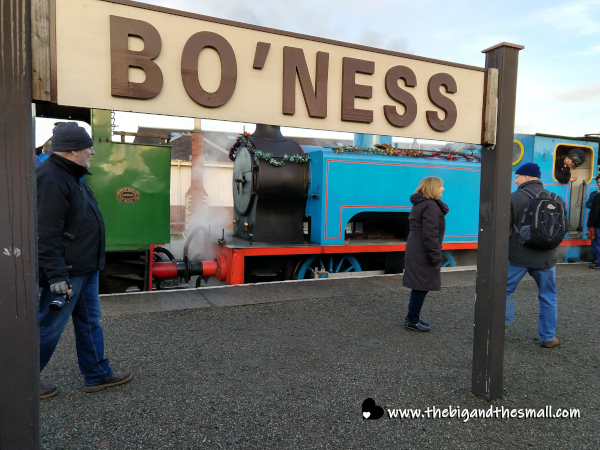 After the train left the station we went back to their house for a cup of tea. That turned into an hours long conversation about God, religion, politics - you know, all those easy topics you usually talk about with people you've just met. It was amazing how well we got along and how quickly the time passed; before we knew it they had to head off to a dinner engagement and we had to get back on the road. Since it was now after dark, Steve was kind enough to take us back to see the Kelpies at night! 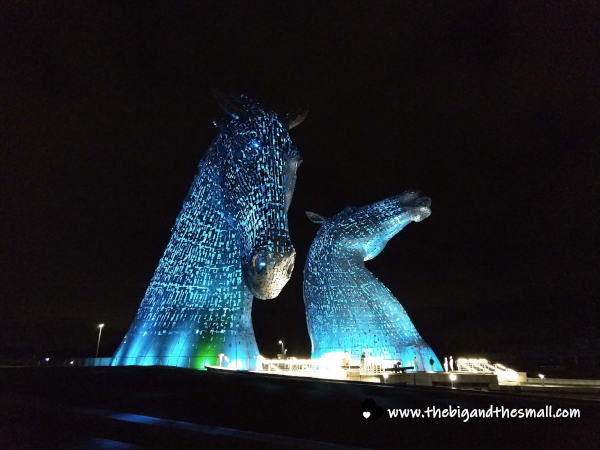 You thought I was done sharing Kelpie pictures didn't you? Haha! They light up at night! I couldn't not share that with you! As we walked toward them in the dark it was fascinating to watch the colors change from one to another. They do it so seamlessly you almost can't tell they are changing until all of a sudden the color is different even though you've been staring at it the whole time. 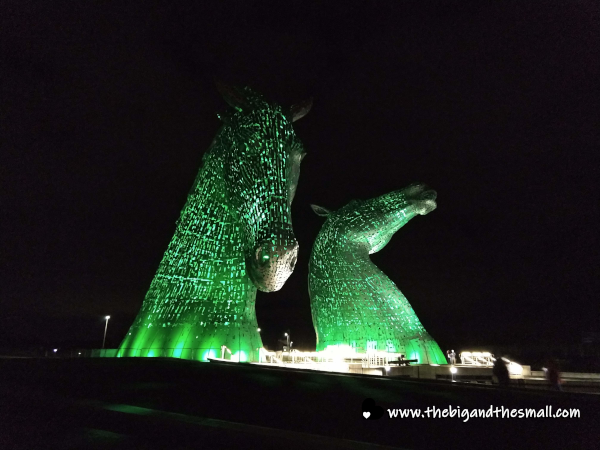 I could have stayed and watched them for a very long time but unfortunately it was freezing out. Like, quite literally, some parts of the walkway had turned into sheets of ice. We stayed long enough to try and grab a picture of every color and then we skedaddled back to the car to warm up again. Seeing them at night was well worth the cold, though. 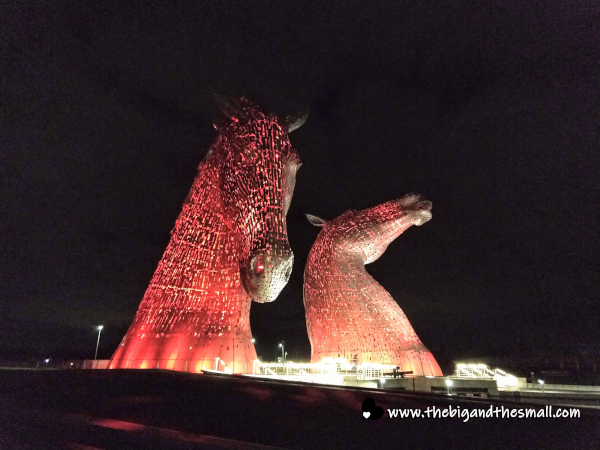 If you ever go to Scotland, I definitely recommend the Kelpies be high on your list of places to see, and if you can swing it, see them in the daylight and at night. I'd also recommend seeing Steve's friends but I don't have their contact information to share with you so you'll just have to find your own nice people to hang out and talk politics with. Don't worry, Joel and I are always up for that!