On day 8 we decided it was time to head in to Glasgow and check it out. The only specific item on our agenda was to see a particular statue Steve had in mind; otherwise the plan was to wander around the city and see what we could find! 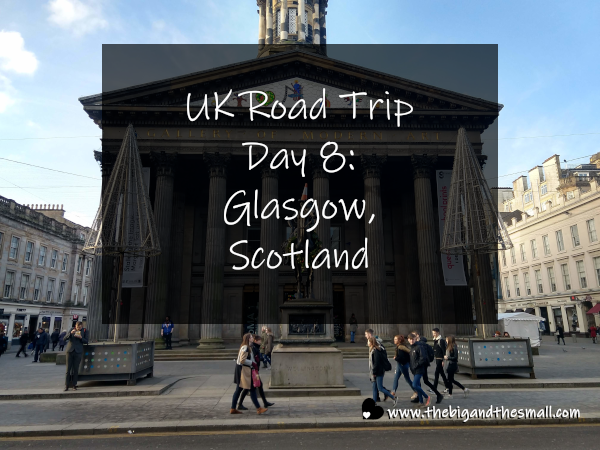 The drive into the city was about 45 minutes from our suburban Air BnB, but once we were there it was fairly easy to find parking close to the city center. We tucked the car in for the day and then set out on foot. It was chilly so thank goodness there were plenty of stores and even some mall-like spaces we could duck into as we wandered around. At one point we found an amazing Harry Potter themed store that had all the Hufflepuff swag I could ever want - but it was all expensive. I daydreamed about getting fully decked out in wizard robes and a wand but decided that wasn't the best use of our money right now. Eventually we made it to the statue Steve had brought us to see. 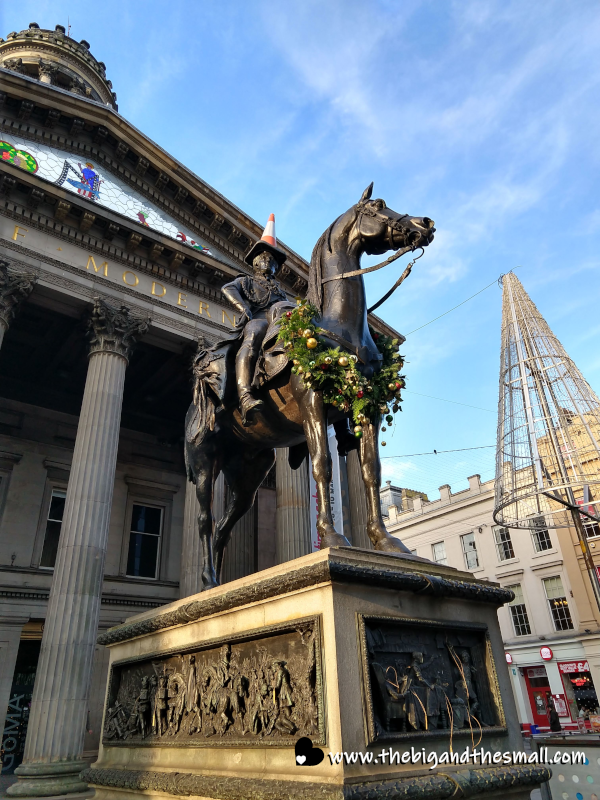 Yep, that's a statue with a traffic cone on its head. The actual statue is of Arthur Wellesly (so close to Weasley) who was the 1st Duke of Wellington. The sculpture was carved by an Italian artist and first erected in 1844. Sometime in the first half of the 1980's someone thought it would be funny to put a traffic cone on his head, so they did. The people of the city took to the joke and now, despite discouragement from city officials and police, there is almost always a traffic cone on his head. Steve said he has seen pictures of up to 5 or 6 traffic cones stacked at one time! It's become something of an inside joke for the city and quite a tourist attraction (as evidenced by our presence). The juxtaposition of the quite regal and dignified statue with the utter ridiculousness of a traffic cone hat literally made me laugh out loud when I first saw it. I love that the Glaswegians work to keep it that way now, which you can learn more about here.

The statue sits outside the Museum of Modern Art, so our next stop was to check that out. I have mixed feelings about modern art. Some of it I adore, in fact our whole house was filled with modern art from artist Gavyn Sky whom we love, love, love. But some modern art I definitely don't enjoy; in fact, I actively dislike it. Unfortunately this museum was filled with the latter. Most of the building was taken up with an exhibit by an apparently world renowned Scottish artist from the 70's. There was a museum docent going around giving a lecture on his work that was filled with (in my opinion) "the emperor's new clothes" style interpretation and discussion. Steve and I pretended to study one of the pieces carefully but we could barely keep a straight face. 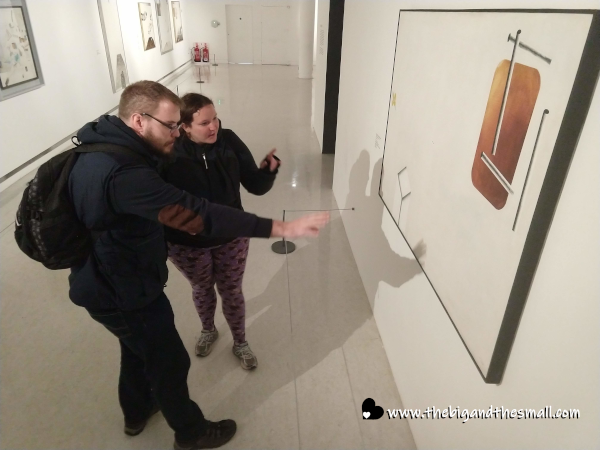 I realize art is subjective so if this is your thing, go forth and enjoy! It just definitely wasn't ours. The one part of the museum I did like was a video of a Rube Goldberg like contraption that I could have watched all day. I did sit and watch it for about 15 minutes before the guys finally dragged me away. By this time we were getting hungry so upon the suggestion of some staff members at the aforementioned Harry Potter store, we went for lunch at the Blue Lagoon. 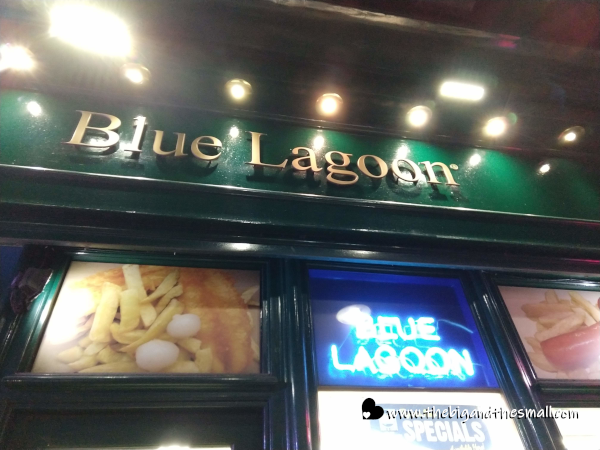 Just like our chippy from the other night, everything was deep fried and it was awesome. I got a deep fried steak and ale pie, Joel got deep fried haggis (because of course he did) and Steve went for another deep fried hamburger. My pie was awesome - kind of like having steak and gravy in a bread bowl but the bread bowl is deep fried. It sounds weird but it was so tasty. I only ate about half the chips that came with it in the name of being somewhat healthy. 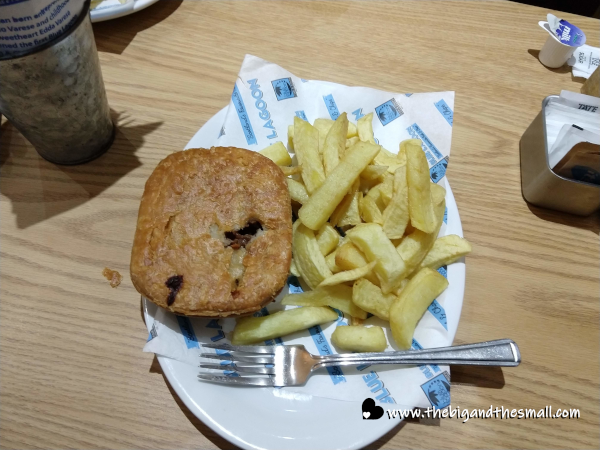 Joel's deep fried haggis is not the most appealing looking food in the world but he loved it! The guy is seriously hooked on haggis, I'm not sure what he'll do once we leave Scotland. Steve declared his fried hamburger inferior to the one from the other night which was so disappointing he declared the whole trip ruined! Luckily we were able to redeem everything with dessert. 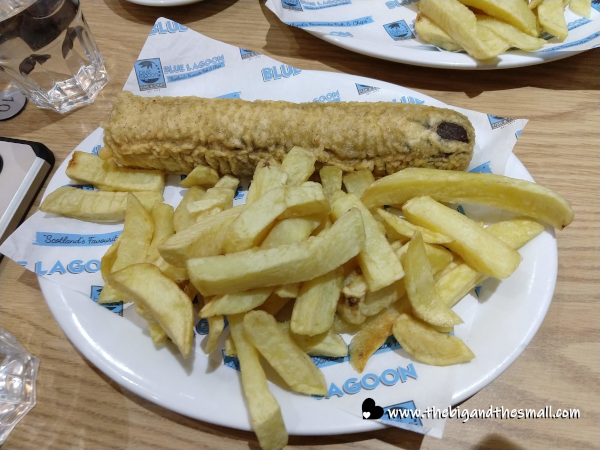 Glasglow is famous for a special dessert - the deep fried Mars Bar! If you thought the Iowa State Fair invented deep fried candy bars (like I might have) you were wrong because Glasgow has been serving up this tasty treat since the 70's. Again it is not the most appetizing looking food, but it was delicious. The batter is crispy and flavorful and inside is a pile of melted chocolate and goo that used to be a Mars Bar (or what we know better as a Milky Way). If you are ever in Glasgow you have to get one of these, I command you. 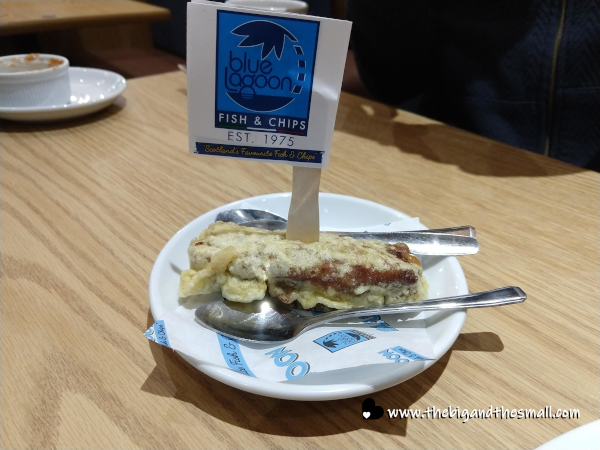 With our stomachs sufficiently full we set out to explore several of the Christmas markets located in the city. I'm glad we had already eaten because the food smelled amazing (but was expensive). If we had room in the budget and our suitcases there were many things I would have loved to gone away with, but alas we were just window shopping. The air of Christmas spirit in the market was contagious so just wandering around it put me in a good mood. 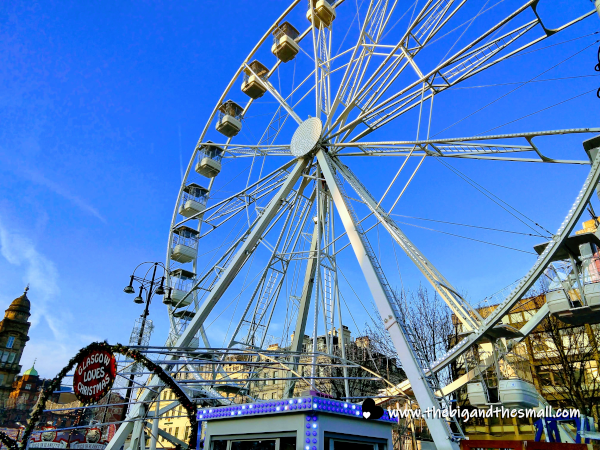 As festive and fun as the market was, by this point the cold was getting to us. We declared the city sufficiently explored, and went back to a place we had first discovered in the morning, called Geek Retreat. It's a gaming store very similar to what Joel used to own, right in the heart of Glasgow! Walking down into the basement felt a lot like going back to Ames. The biggest difference was this one had a cafe as well as the gaming store and play area. We pulled the game Settlers of Catan off the shelf and proceeded to play two games where Joel whooped our butts while declaring that he "loves us both equally". Not sure how Steve got ranked with Joel's wife of five years after about five minutes, but okay! Despite losing terribly it was a lot of fun and a perfect way to pass the time inside from the cold. 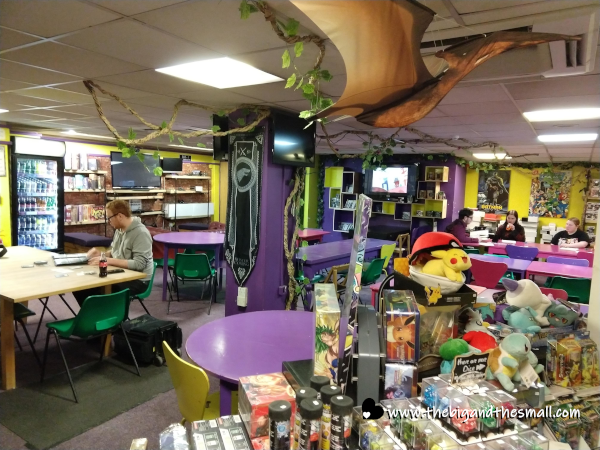 By the time we emerged from the Geek Retreat dungeon the sun had set and the city had come alive with Christmas lights! Between the Christmas markets, the setups on the squares, and the buildings themselves there were gorgeous lights everywhere. If it hadn't been so cold I could have stopped and stared at this building for a very long time. 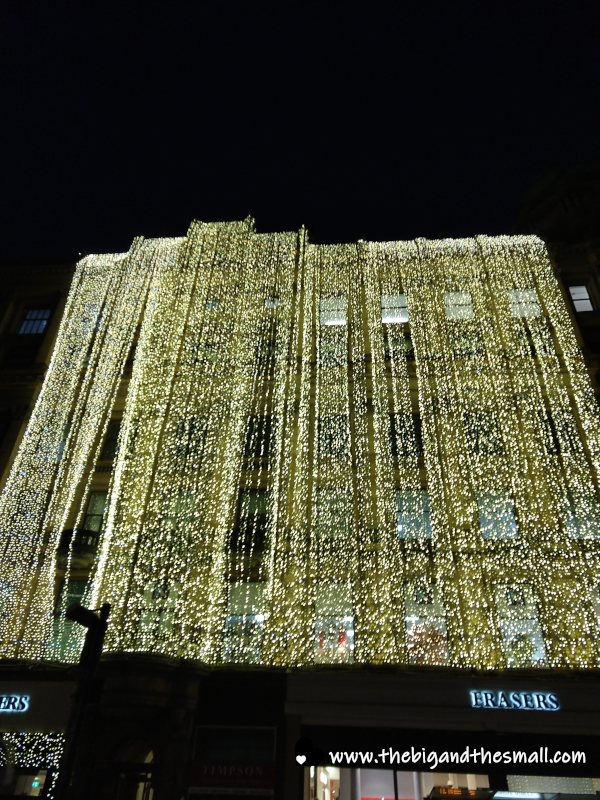 We slowly made our way through the lit up city back to our car, then headed back to the suburbs to tuck in for the night. I think we ended up watching weird British quiz shows and eating all the leftovers from the curry the night before.

If you ever make it to Scotland, Glasgow is definitely worth a day of your trip. Be sure to check out the statue and don't leave without eating a fried Mars Bar!