On Day 6 of our UK road trip we finally made it to Scotland! So far we don't have any plans for a housesit in Scotland so this is our first and maybe only chance to experience the country. After a long day in the car on day 5 we were feeling the need to get out and stretch our legs so we made our way up to the Highlands for some hiking. 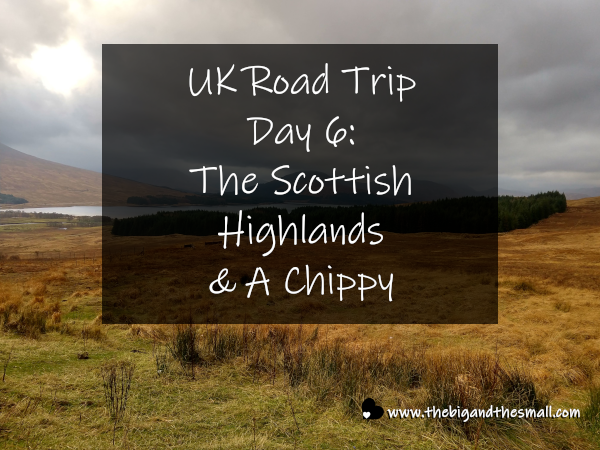 Getting to the Highlands was still a bit of a drive from our Air BnB (we are staying in a suburb of Glasgow) so we did have to pile into the car for part of the day. Luckily there were plenty of reasons to stop on the side of the road - aka waterfalls! Joel spotted a sign for this one and made Steve pull over for it. We had to hike a bit from the roadside to find the actual waterfall and it was fun to hear the sound of rushing water get louder and louder as we approached. The pictures don't really do it justice. 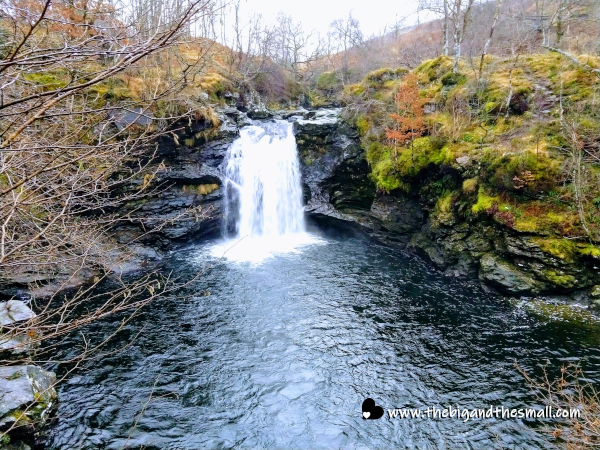 We saw several more on our way north, as well as other "stop the car now so I can take a picture views." When we crossed officially into the Highlands I (like the tourist I am) made Steve pull over so we could get a picture with the sign. A girl needs proof she was really in the Highlands! 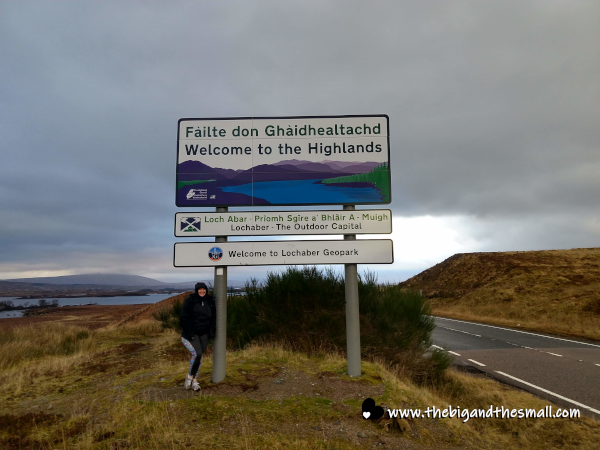 When we made it to our hiking spot we ate a packed lunch before trekking out into the wilderness. Steve had warned us there would be no restaurants/stores (or bathrooms, eek!) up here so I had made us some ham sandwiches for the car and we still have plenty of potato chips left over from our taste test of crazy British flavors. Once we were fortified with carbs and protein it was time for hiking! I'll admit, I sound more enthusiastic here than I was in person. The weather wasn't great - on the cold side with some drizzly rain - so I tried to convince Joel that I should just stay in the car and read my Kindle while they hiked. He insisted I go with so I bundled up (stealing Steve's gloves since I don't have any) and headed out. 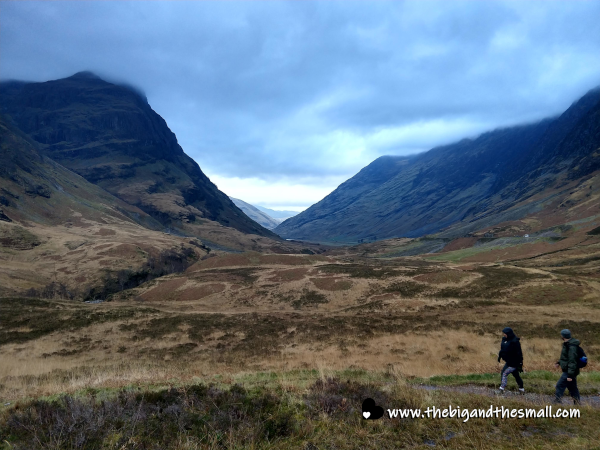 I will begrudgingly admit it was worth it. The place we were hiking was called "the lost valley" so we were going up and down on the trails. Lots of other people were around but at times it felt like we were the only three people in the world. (If you squint at this next picture you can see Joel far ahead of me hiking in shorts!) 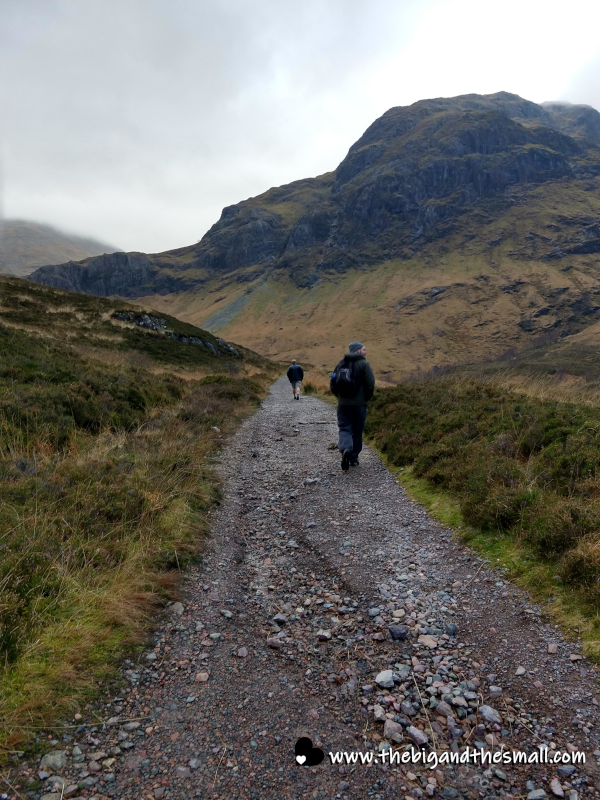 At one point we reached some rocks that were kind of like stairs but mostly like rocks. There was a rope railing on the side so I womaned up and pulled myself up those rocks like a dang super hero. Ok, probably not super heroic, but I was pretty proud of myself when I made it to the top. 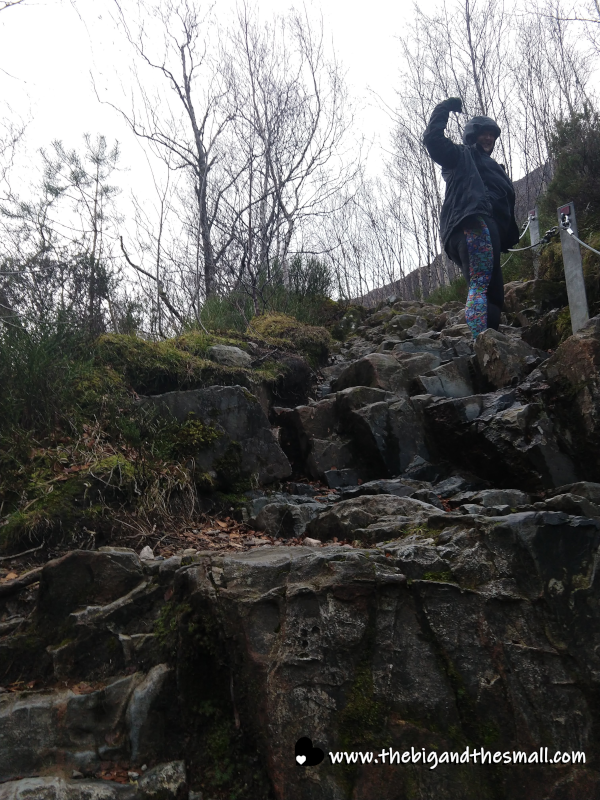 After that the trail got even steeper and slippier so it was time for a break for me. I wanted to head back to the car on my own but the guys adamantly refused to let me hike by myself (probably a good idea in retrospect) so we found a spot where I could sit while they went ahead. They were gone for about 40 minutes, but I was able to chill and listen to some pre-downloaded podcasts on my phone so all was well in my world. 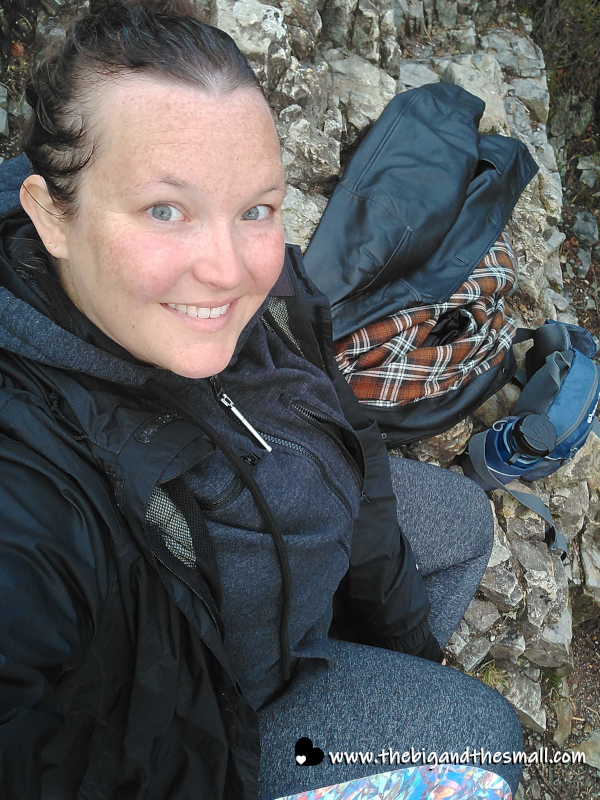 When they left me behind Joel also left his coat for me to guard, which meant he was now hiking in the Scottish Highlands in mid-December in shorts and a t-shirt. Yep, sounds about right. He and Steve continued up the mountain and came across some beautiful views and even some more small waterfalls! 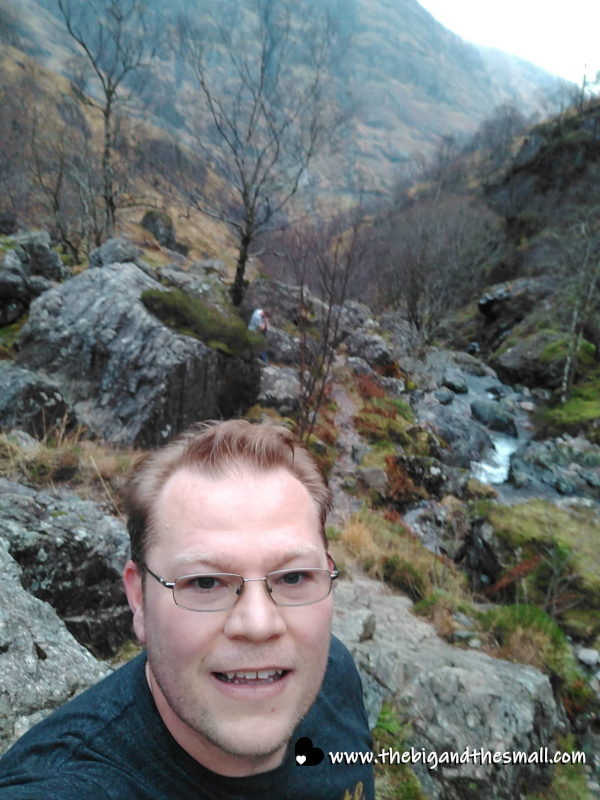 Eventually they came back to get me and we headed back to the car. The walk back felt a lot shorter than the walk out and before I knew it I was cozied up in the car again. We drove around some more through the Highlands before heading back home for dinner. None of us were in the mood to cook after hiking all day, so Steve decided to get us a "chippy" for dinner. This is apparently British for "fish and chips" except not always just fish and chips. When you go to a "proper" fish and chips shop there are all sorts of options for fried food galore. 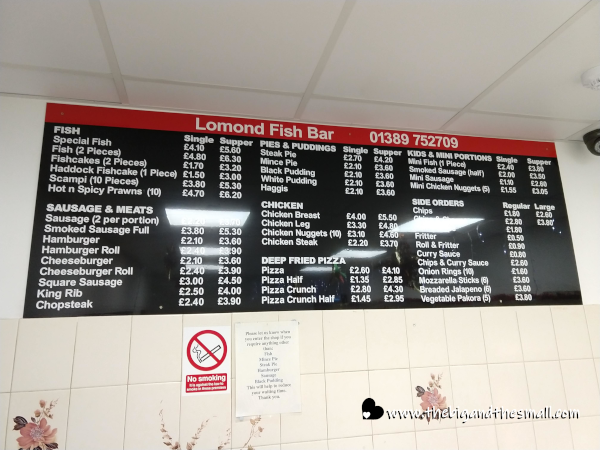 Steve said his usual mode of operation is to go and see how much food he can get for 20 quid. Turns out that's a lot. I let the guys go without me and they came back with this spread. From the top left going around clockwise we had: deep fried pizza (not even kidding), curry sauce, deep fried haggis, chips (aka french fries), fried fish (what you would typically have with a fish and chips), deep fried sausage, savloy (a kind of sausage), deep fried cheeseburger, deep fried potato cake, and fish cakes (also fried, duh). It was kind of overwhelming and there was not a single vegetable in sight. 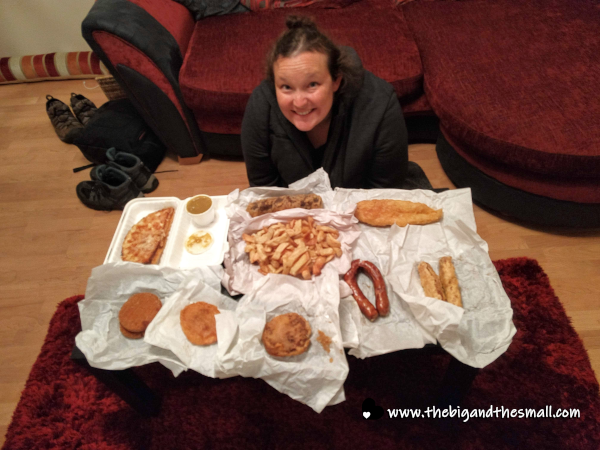 We spread it all out on the coffee table and went to town. I made myself try a little bit of everything, even the fish which I usually don't like, and the haggis which I wasn't super excited about. The fish was actually good (for fish) mostly because the batter they use was incredible - greasy enough to be flavorful but not overwhelmingly so. The deep fried haggis was surprisingly good and turned out to be Joel's favorite food of the night. If you look up the definition of haggis it's pretty gross sounding but it really just tastes like sausage. (And if you really think about it, most sausage sounds gross when you describe it in detail.)

My favorite food of the night was the deep fried hamburger. You could get it deep fried with the bun as well, but the guys went the "healthy" route and just got the burger/cheese dipped in batter and deep fried. It was so freaking good. The cheese was super melty and the batter was delicious and the burger itself was good, too. Yum. I also really liked the deep fried sausage and potato, and the curry sauce was amazing on everything. The deep fried pizza was okay, but the pizza itself was low quality (it was lacking in both sauce and cheese) so that made it less tasty.

We did not manage to eat all the food on the table in one go, though we did give it a good try. Warning - you will almost immediately fall into a food coma after this much fried food in one sitting. 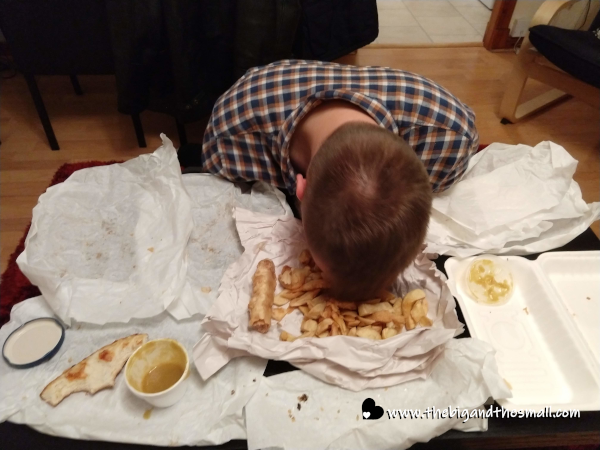 If you are ever in the UK and get the chance to try a chippy like this - go for it! Forget the diet for a night, take some heartburn meds, and try all the yummy fried goodness this kingdom has to offer. You will not regret it.

Which of the items on our dinner menu do you want to try the most? Are you brave enough to try Haggis? Shout out below!