Day 4 of our road trip was our last day in Wales, but we were so close to the border we actually hopped over to England for the day! We spent most of the day in the city of Chester, which was founded as a Roman fortress in the 1st century CE. The city still has a lot of Roman architecture and other features to explore. 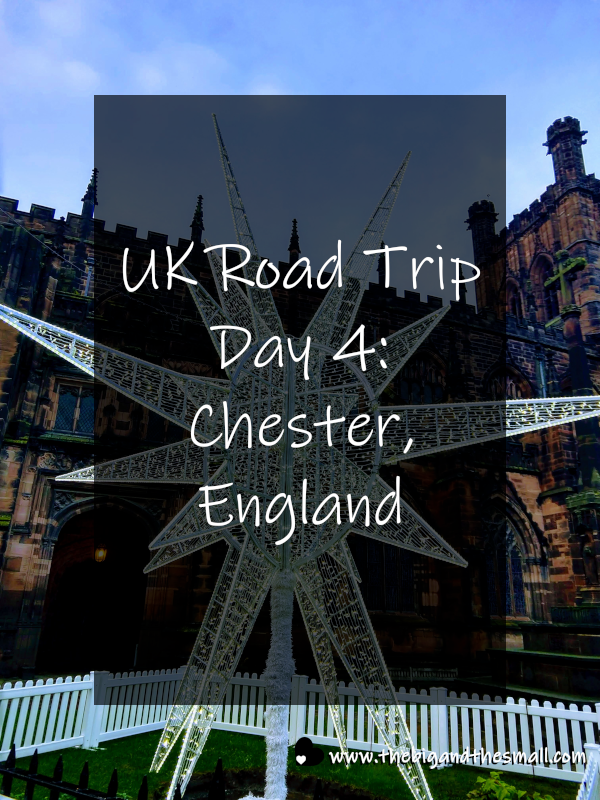 On the way to Chester we spotted a sign indicating there was an aqueduct nearby, so we decided to go check it out. This aqueduct was built from 1795-1805 and is still the largest in Britain. It is 5 foot 3 inches deep and plenty of boats still use this to get from one place to another! The bridge is 126 feet high above the river and valley below, so the views from it were pretty great (though the day was seriously overcast so they could have been better). 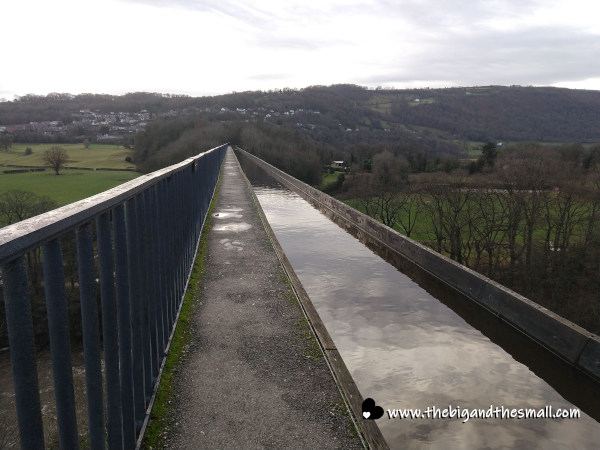 When we neared Chester we decided to park outside the city and then walk in, so as to save ourselves the big bucks and big pain of parking actually in the city. The first place we came across was the Roman Gardens - so named because they were built in 1949 to display the many Roman building fragments that had been discovered around Chester. The gardens also provide a route from the river (where we entered the city) to the city center. 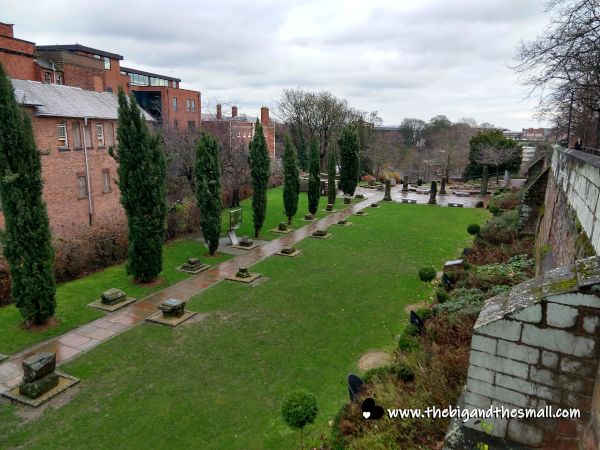 The next place we found was an ancient Roman amphitheatre! This one is the largest and most elaborate in Britain, and was a site for wild-beast hunts, gladiators, and public executions. When we arrived there was a group of school children getting a lesson from a man dressed up in Roman garb, and somehow it included making their teachers pretend they were fighting each other gladiator style. It was pretty fun to watch. 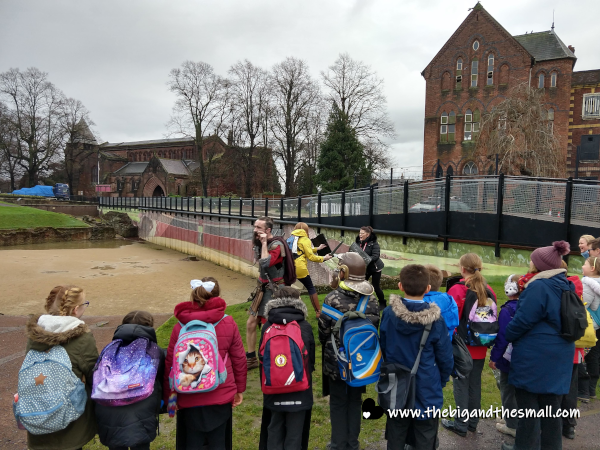 Then Steve decided that he and Joel should pretend to fight to the death, so he found them some sticks to use as swords and they went at it. Steve thought he had the advantage by keeping the bigger weapon for himself, but it turns out the lighter one meant Joel could be quicker on his feet and he soundly defeated Steve. My champion! 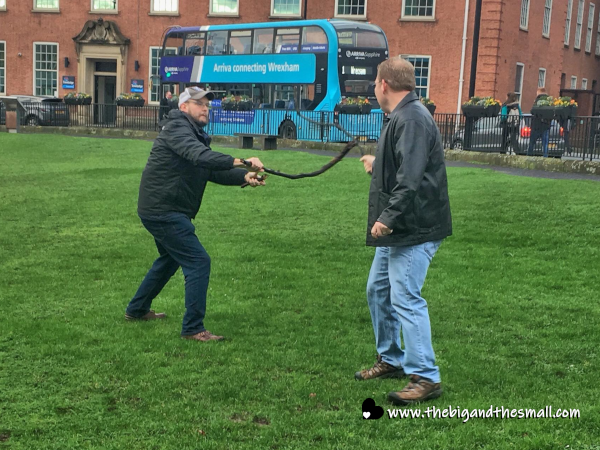 We were about to head to the famous cathedral in town, when I spotted something in the distance that intrigued me so much we had to check it out. It was a giant statue of a man, and it turns out his name is "Fred." He's a "freeman and Guildsman" of the ancient city of Chester, and he exists to promote this ancient church, once the city's cathedral and now a Major Parish Church in England. This is a bit of brilliant church marketing - we never would have come over if not to check out Fred, and now we were going to check out the church! 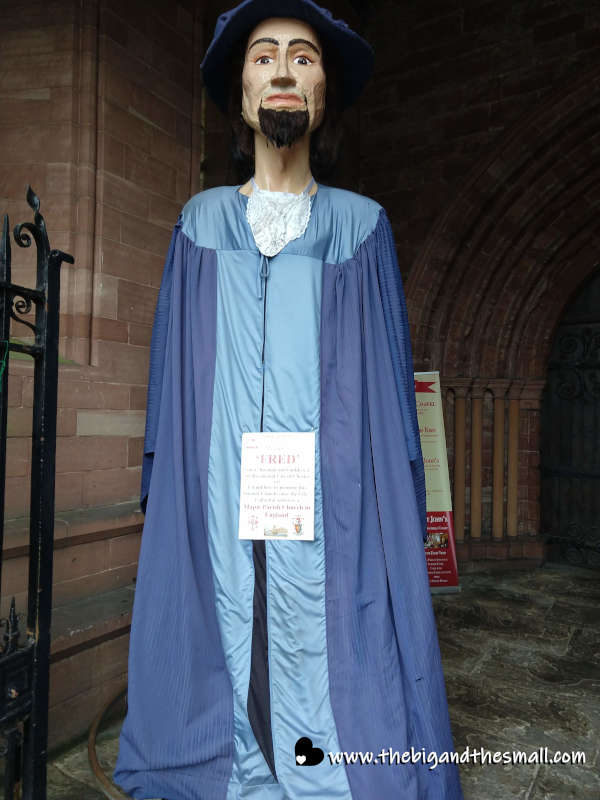 Inside the church there was a group of school children rehearsing for a nativity play, which was fun to hear going on in the background. The church had some amazing architecture, but I was most fascinated by the organ. It was massive, and even the place for the organist to sit was one story up in the air. I would love to hear music played on an organ like this someday. 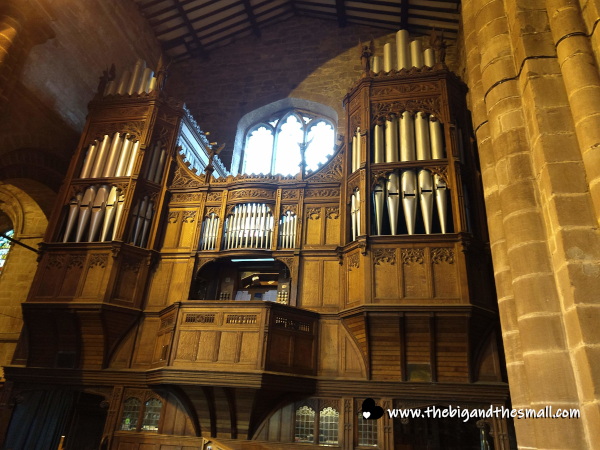 Before we left we checked out the cafe inside the church, and they had a map for visitors to mark where they are from! No one had claimed our area of Iowa yet so Joel put up a marker for us. Steve was able to put one up for where he's from in England as well. 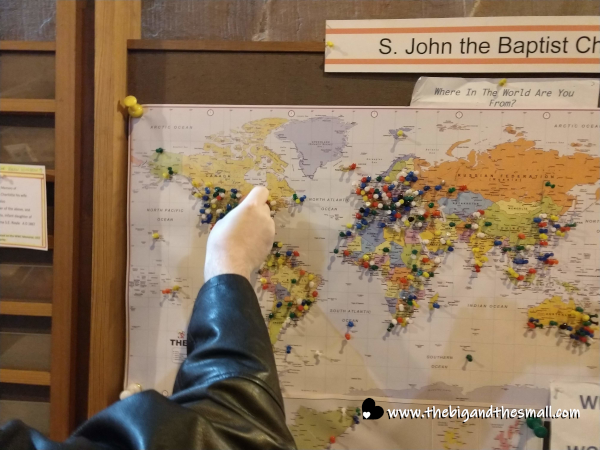 After the church we set out to find our way onto the city walls so we could take a scenic walk over to the main shopping area of town. The city walls were built by the Romans and they still exist today which is awesome. As we walked along they felt oddly familiar to me, and I finally figured out why that was. If you have ever been to Des Moines, IA you know that there is an extensive sky walk system - a series of insulated walkways that take you from one building to the next so you never have to go outside (comes in handy during brutal Iowa winters). The city walls felt exactly like that, except they are outside! (And ya know, they are older). 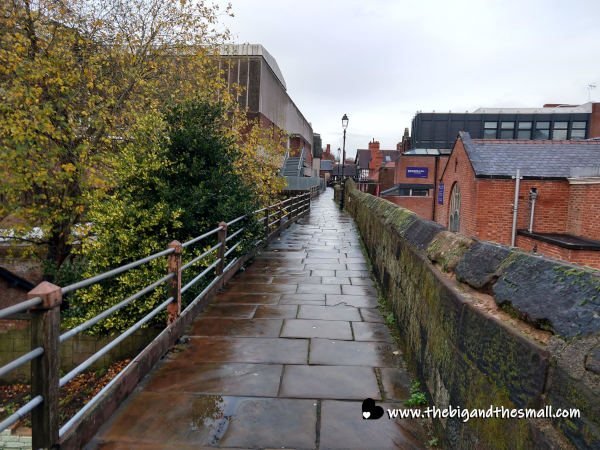 When we reached the main area of town, the city wall had this cool clock tower on it. Built in 1897 it's all red and gold and majestic looking. 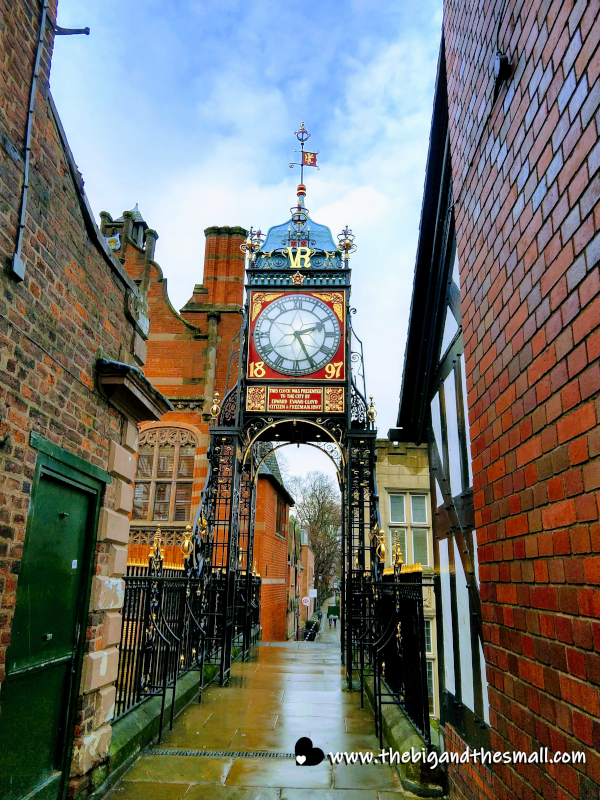 But the best part is when you turn to look down at the street. Look at that view! I think this place would be pretty neat to see anytime of year, but with the Christmas decorations it was extra special. (It looked really great at night but it's super hard to get good pictures of Christmas lights at night so just use your imagination). We went down onto this street and walked along for a while, and every few blocks or so there were musicians playing Christmas music for the crowds. 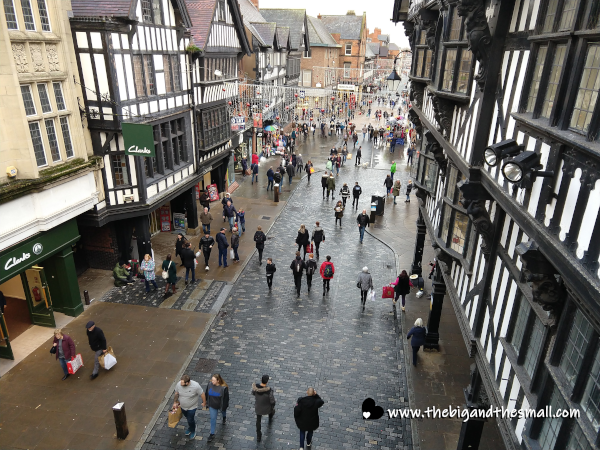 When we got close the cathedral, we also found the Christmas market! These booths are set up in December and have all sorts of things for sale from clothes to food (one even had Harry Potter wands!) I found a unicorn hat I fell in love with, but couldn't justify spending £12 on, and then we found the salami stand. They had samples out, and after one bite we knew we had to buy some. For £10 we got 6 different types of salami. Ten minutes later we went back so Steve could buy his own set, and then I made the guys pose for a picture with the vendor. 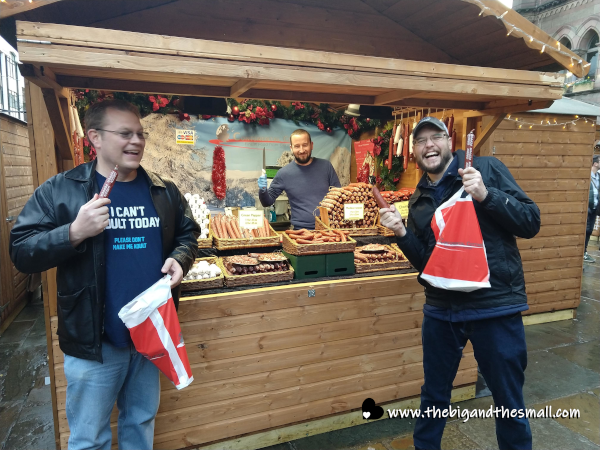 After the market we finally made it to the Cathedral, and it was epic. The place is huge and amazing and you could wander inside for literally days and not see everything. While we wandered around someone did start playing the organ (I think they were rehearsing for that evening's worship service) and it was incredible to hear the sound filling the huge space. Here is just one example of some of the incredible woodwork and architecture. 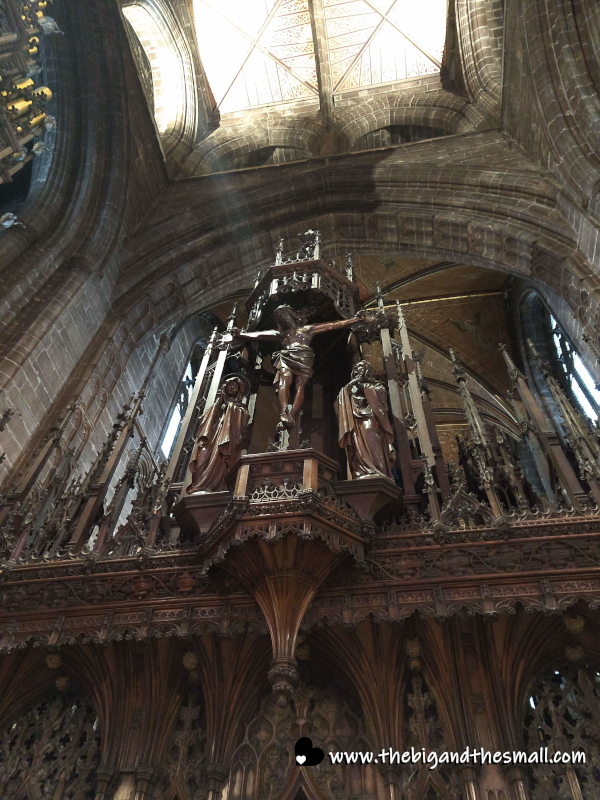 I am really glad we were there near Christmas time, as this meant we got to experience their "Festival of Trees"! The hallways surrounding the sanctuary were lined with a multitude of real Christmas trees decorated by various school groups and local charities. The smell of the evergreens and the glow of the Christmas lights made me feel like I was on the set of a Hallmark Christmas movie. 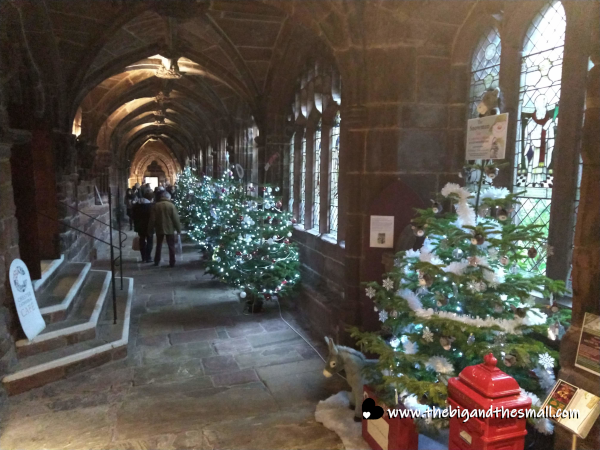 Tucked away in a corner of the sanctuary we found what is perhaps the coolest church fundraiser I have ever come across. They are building an exact replica of the sanctuary out of Legos - which is super cool in and of itself. What makes it a fundraiser is that people pay £1 to get a single brick added to the structure. It will take 350,000 Lego bricks to complete it, which means when it's done they will have raised £350,000! On the day we were there 162,189 piece had been donated so far. 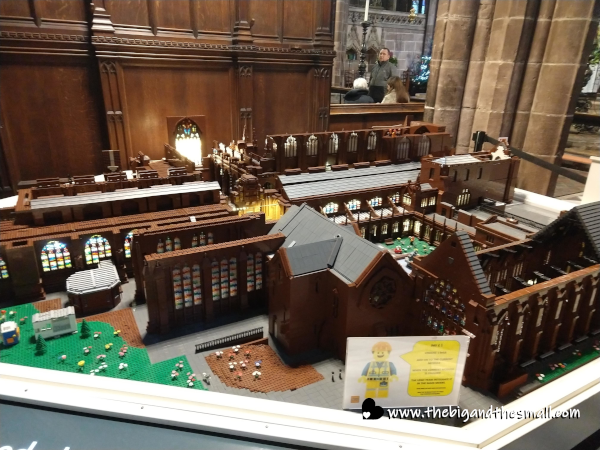 By this time we were hungry so we went to a restaurant called "Off the Wall". (It took me far too long to realize it was called that because it was literally just off the city walls). The food was good but nothing to write home about so I won't bore you the details. We spent some more time wandering the city after dark, enjoying the atmosphere and the Christmas lights, before heading back to our Air BnB for a movie and some wine the hosts had left for us. It was a great last day in North Wales and tomorrow I'll share all about our trek to Scotland!