Welcome to Day 2 of our epic UK road trip! (If you missed day 1 you can read it here.) While we travel we'll be staying at some Air BnB's, each of which will act as a sort of hub for a few days. We can leave all of our stuff there and come back at night, but each day we'll venture out to discover what's around us. On Saturday, we started with checking out one of Steve's favorite places in Wales, a town called Portmeirion! 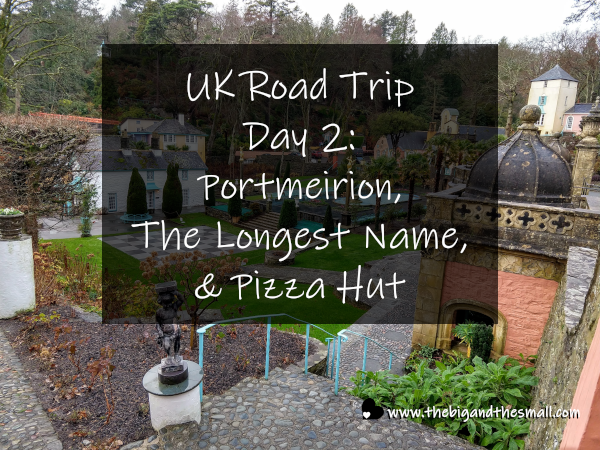 Joel and I didn't know what to expect, but Steve told us a little about it as we drove the 45 minutes or so to get there. The town is now a tourist village, owned and operated by a charitable trust, but it started out as a rich man's dream fulfillment. He had apparently always wanted his own town, so he built one! It's modeled after Italian villages and is right on the coast so it has spectacular views. 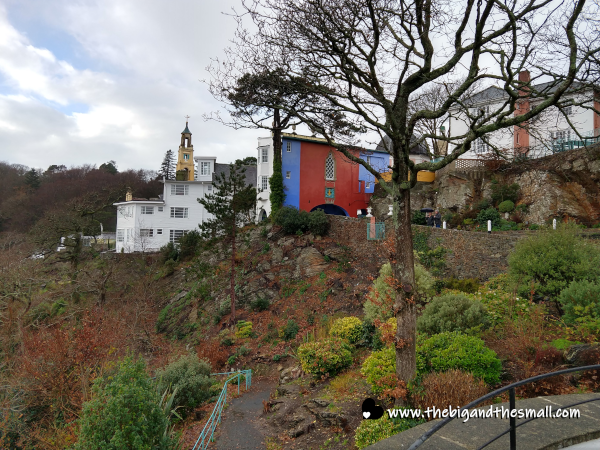 It always was and still is a fully operational town, people live in the houses even with the tourists wandering by right outside! I can't decide if I would love living in this place because it is so darn cute, or hate having people outside and around all the time. This one is particularly cool, because it's built right over the walkway - those windows above the arch are someone's house! Also as we walked around there was Christmas music piped in at various points, and you know I was a big fan of that. 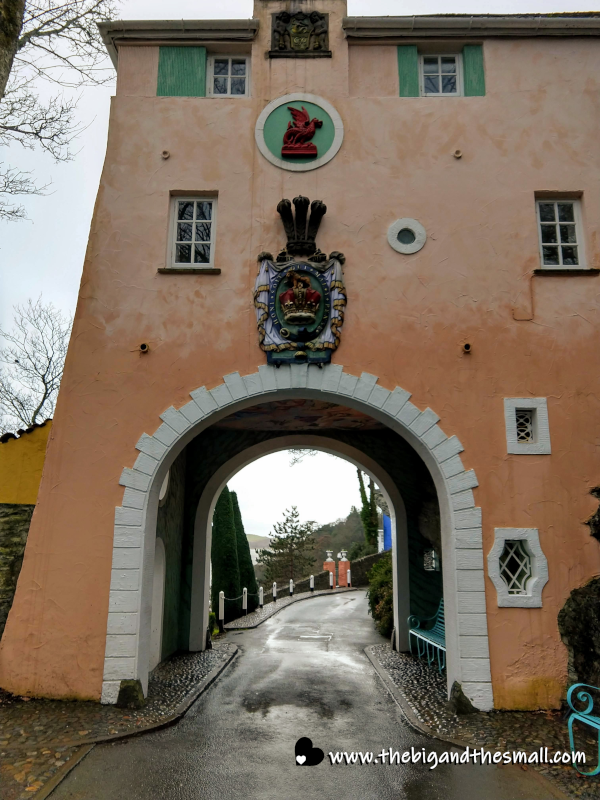 The center of the town was definitely the showpiece. There is a huge community area with a fountain, a large scale chess board, and amazing landscaping. The day we visited it was overcast and rainy, but it was still beautiful and you can see how stunning it would be on a nicer day. Steve said a lot of people come to this town to get married and I can see why, you could get some amazing pictures here. 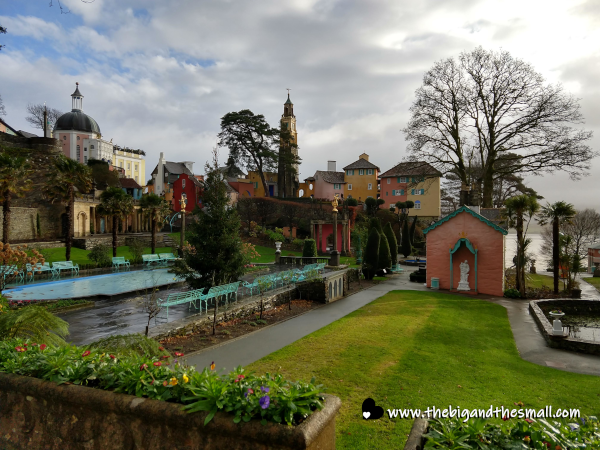 Despite the rain we decided to walk down by the coast for a bit where we were pelted with the rain and cold. Of course that didn't stop us from Titanic-ing when we found  a strange concrete boat attached to the side of the walkway. (Our best guess is that it was built as some sort of playground for children?) Also Joel and I had to reference the Lonely Island song "I'm on a Boat" which Steve did not get till we showed it to him a few days later. 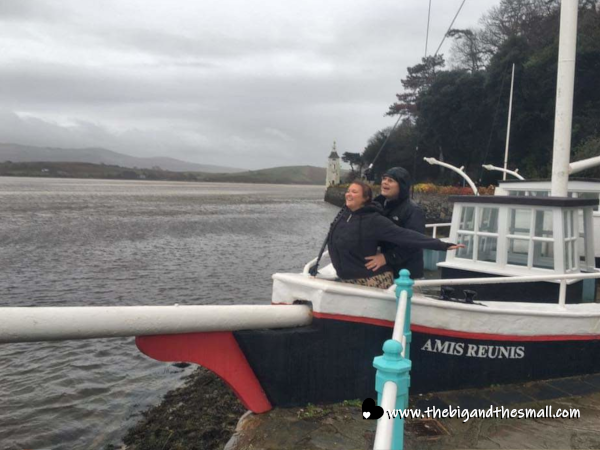 Steve didn't act silly on the boat but he did get a little crazy when we found some old cannons pointing out to sea. Joel pretended to light one and shoot at enemy ships while Steve did... this? 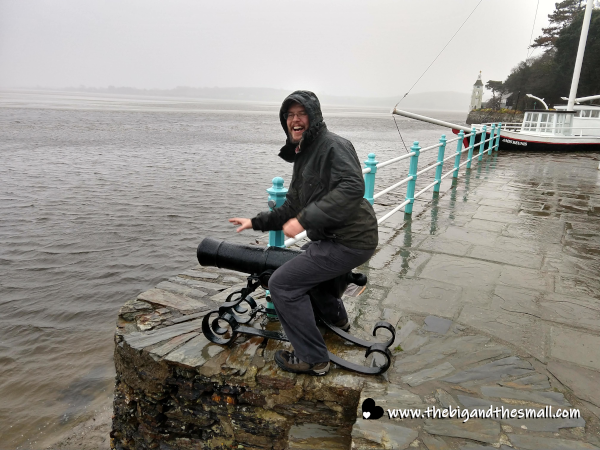 When I couldn't take the rain and cold anymore I convinced the guys it was time to go, and Steve took us back towards the car in a direction that included walking down by the water on a pathway that would be covered at high tide, then up through some stairs that didn't altogether feel public, and finally into a wooded area. It was on that path that we found this tree stump with coins tucked into it. Steve said you put a coin in for luck, but unfortunately none of us had one available, so hopefully taking a picture of the tree will also bring luck. 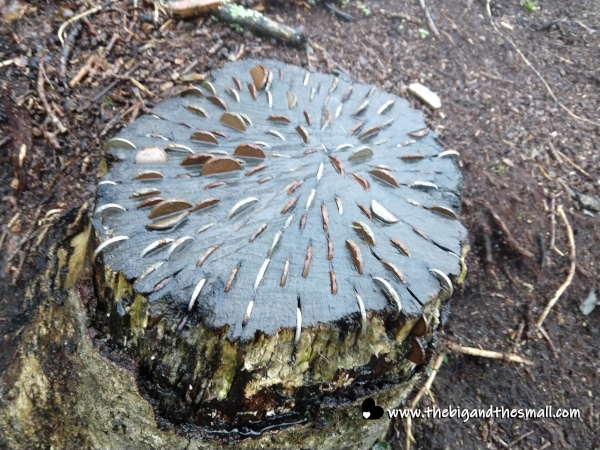 After getting our fill of Portmeirion it was time to hop back in the car and head to the town with the longest name in Europe. It is a Welsh town with a Welsh name and it was specifically named such to receive that honor. The townspeople who invented it in the 1860's hoped that would serve as a tourist attraction, and they were right! Are you ready to see the town name? Here it is: Llanfairpwllgwyngyllgogerychwyrndrobwllllantysiliogogogoch. Yep, that's quite a mouthful. Here's a sign near the train station in town that gives you the pronunciation (I don't find it particularly helpful, it's still a tough one!) 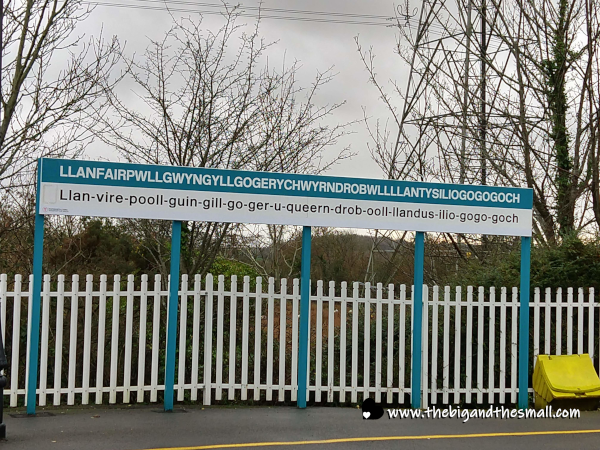 The town name does have an actual meaning, it is not complete gibberish. Here's a sign that let's us know it means "The Church of Mary in the Hollow of the White Hazel Near the Fierce Whirlpool and the Church of Tysilio by the Red Cave." I'm not sure how that makes it all into one word but there ya go! 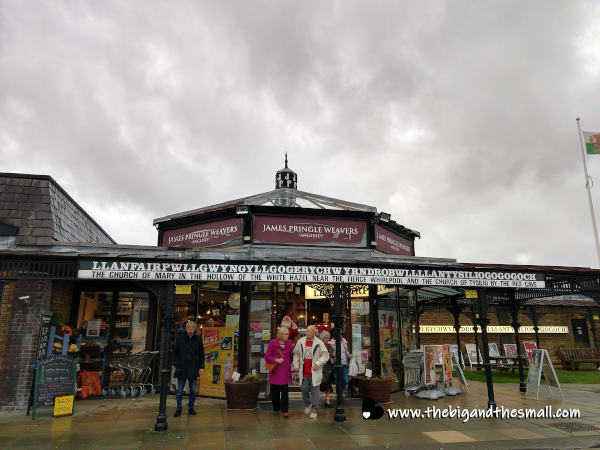 In the same parking lot as the train station is a shopping center that is sort of like a department store with all sorts of things available. We went in (mostly to get out of the cold) and wandered around for a while. We restrained Steve from buying a hat (he has like 5 in the car he doesn't wear!) but he did buy a vest (which he insisted on calling a "gilet" for some weird British reason). All three of us were super excited to find they had a small American food section that included A&W Root Beer! Joel and I were significantly less excited when we saw the price - £2 for one can! Steve couldn't resist splurging on one for himself though. He offered a sip later but we were not about to partake in that liquid gold. 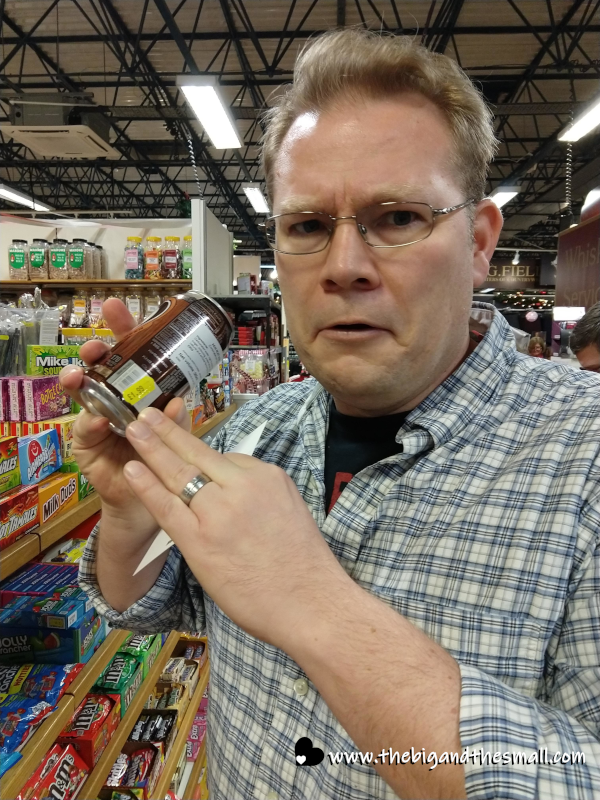 Our selfie of the day came when we found a Welsh flag on the wall. I've said it before but I'll say it again - Wales has the coolest flag ever! I mean, it has a dragon on it! 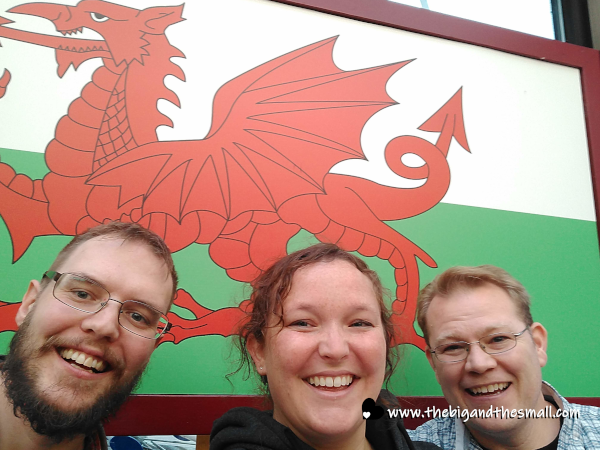 On the way home we were debating what to do for dinner when we spotted a KFC. Joel and I are still missing some American foods and Steve was up for trying it so we pulled off the road, only to discover that in the same area was a Pizza Hut! (There was also a McDonald's so I started singing the "Pizza Hut, Pizza Hut, Kentucky Fried Chicken and a Pizza Hut" song which in a weird twist of fate Steve immediately started singing with me and Joel had no clue what it was! We decided it was a generational divide rather than our usual American/British divide). I have been craaaaving pizza, specifically Pizza Hut pizza lately so we were more than excited to go get some! 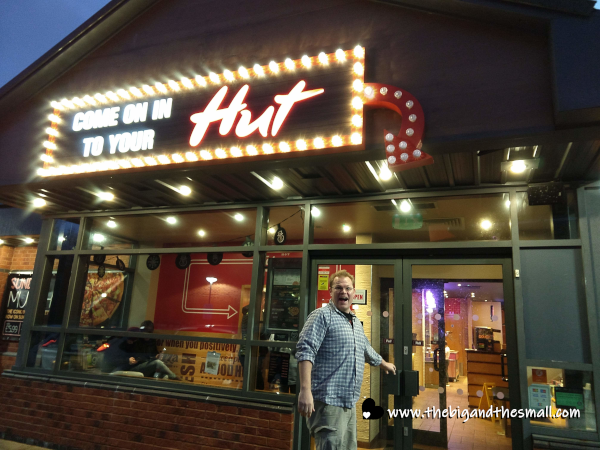 The inside looked and smelled just like a Pizza Hut back home, which was promising. The menu mostly looked like one back home except for the markedly higher prices. We ordered a "big sharer" deal which got us 2 appetizers, a large pizza (looked more like a medium to us), and 2 desserts along with trips to the salad bar. The salad bar was disappointing - missing key ingredients like cheese and eggs, though it did surprise us by having ranch (not good ranch, though). The appetizers were pretty good and the desserts were awesome, but the star of the show - the pizza - was meh. The pan crust wasn't as thick as it should be, it was dry (gotta have some grease at least!), and there could have been more toppings and cheese. It was still tasty, just not nearly as tasty as I would expect from a true Pizza Hut. 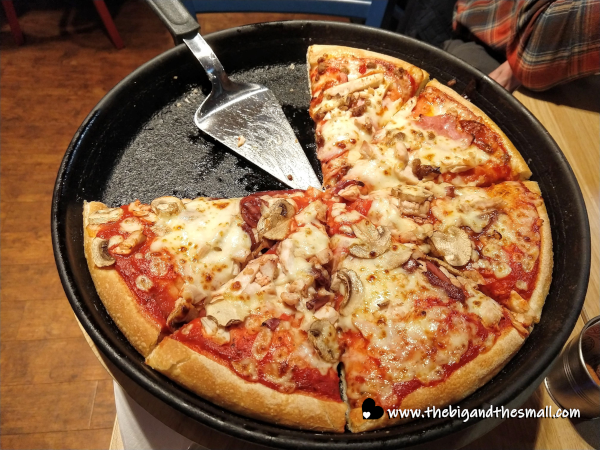 The biggest (and most surprising) disappointment of all? They didn't have parmesan cheese for the pizza. I'm not kidding. It was so weird. I haven't really seen parmesan in the grocery stores here (at least not the bottle Kraft kind, they do have the fancy expensive kind) but I thought for sure that Pizza Hut would have it. If you eat pizza at a restaurant and don't get to put parmesan cheese from the table all over your pizza did you really even have pizza? Strangely, they had Pizza Hut branded BBQ sauce (why?!) but no cheese! Also the chili was not red pepper chili flakes as one would expect, but chili powder. Weird all around. 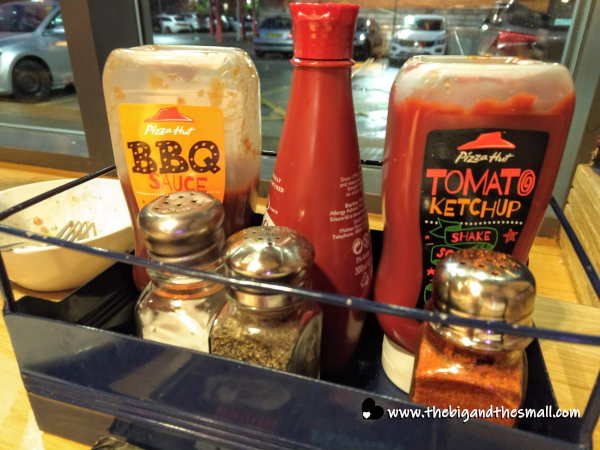 Ok so it's probably our fault for eating at a Pizza Hut in Wales instead of something more authentic, but we had to try it out. My craving for pizza is gone, and I am looking forward to more authentic food on the rest of our trip. And now, we have saved you the trouble - when you are abroad and want Pizza Hut just deal with the craving, don't fall for the lies of the imposter Pizza Hut!

O' Sprinkle Cheese, o Sprinkle cheese, how much we do adore thee

In America, we don't adhere to the Parmesean certification rules which is why we have it for cheap (also, often it is diluted with additives like wood pulp). Everywhere that does require the name Parmesean to mean Parmesano Reggiano only has the expensive stuff.

We Adore Thee A Lot!

Well isn't that interesting! I have heard the wood pulp additive thing...which grosses me out when I think about it...but then I just make sure not to think about it, lol.

Yeah, I try not to think about it either but now I usually buy the expensive stuff and use it less - except for now, when I can't have any so it doesn't matter until Nugs can process dairy. And sorry for the TMI fact-share :) lol.

You're My Favorite Nerd

Besides Joel, of course :)