Traveling Fare: A Farewell at Denny's in Wales!

As I write this post we are spending our last night in Wales before we begin our two week road trip through Scotland, and by the time you read this we will be well on our way! On Wednesday we bid a fond farewell to some of the friends we have made in the area by all going out to breakfast at - you guessed it - Denny's! 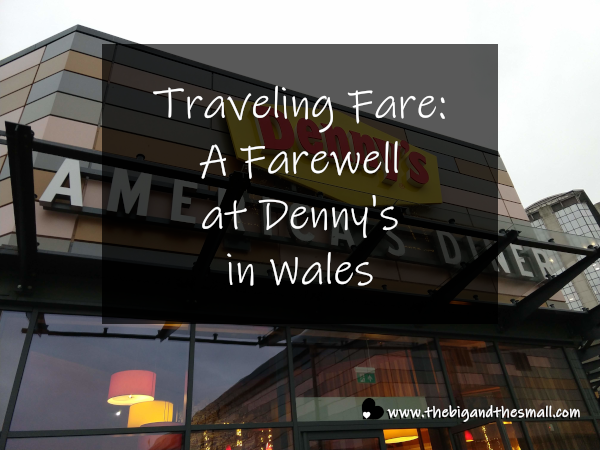 The Denny's here in Swansea has not been open for very long, and our local friends had been eager to try it out for a while. They thought it would be fun to go with us as Americans, so we could let them know how authentic (or not) it is! You can see by the outside of the building that Denny's has branded itself here as "America's Diner." That's a lot to live up to Denny's, so let's see how you did.

Just inside the front door they had some decorations for Christmas set up. Big gaudy Christmas decorations in early December? Check one for the authentic American column! We, of course, couldn't resist getting a picture with the tree and giant bear. 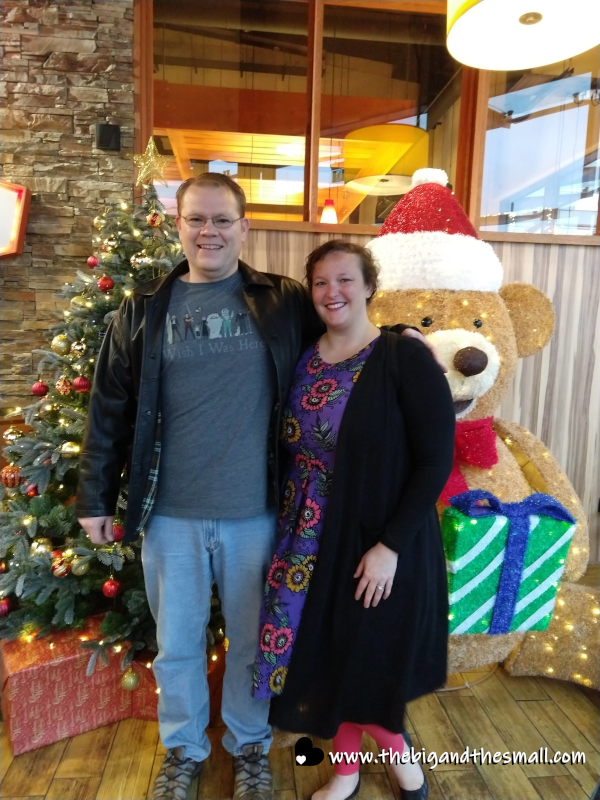 When we sat down and started looking at the menu, Steve pointed out a little concession they made to the UK. Check out the apostrophe in the "Denny's" - it's a Union Jack! 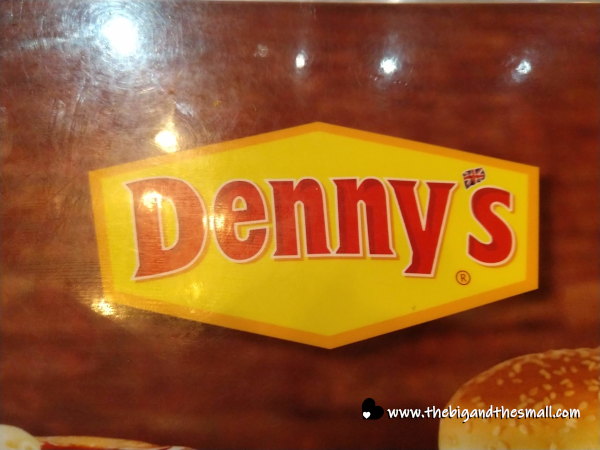 Inside the menu it was pretty well all-American - at least in the breakfast section which was all I paid attention to. There was one huge menu item lacking (in my opinion) - biscuits and gravy! Can you think of an American breakfast diner that doesn't have the classic biscuits and gravy? I was really looking forward to trying whatever version they would have here, but alas, I could not. They did have a few nods to British breakfast tastes with things like porridge, tea, and beans available on the menu.

Joel went with a pancake breakfast that included chocolate chip pancakes, bacon, sausage, hashbrowns and eggs. Everyone at the table thought chocolate chip pancakes sounded really weird, especially when paired with bacon. When the food arrived it looked pretty typical for food you would get in the States, and it was tasty! 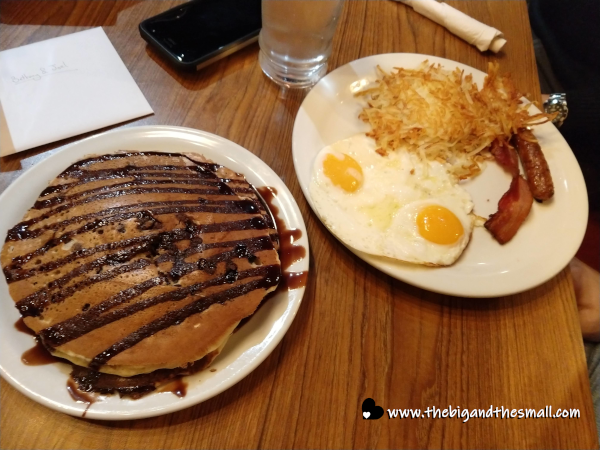 I talked Steve into trying a southern American classic - chicken and waffles! (Seriously, how do they have chicken and waffles but not biscuits and gravy?!) When it arrived the waitress warned us that the syrup was a spicy maple syrup, and it really did have a kick. We all decided it was an unnecessary departure from regular syrup and didn't really add anything to the dish. We also agreed that the portion size for this one was small compared to what you would get in the States - we figured there should be at least twice as much chicken! 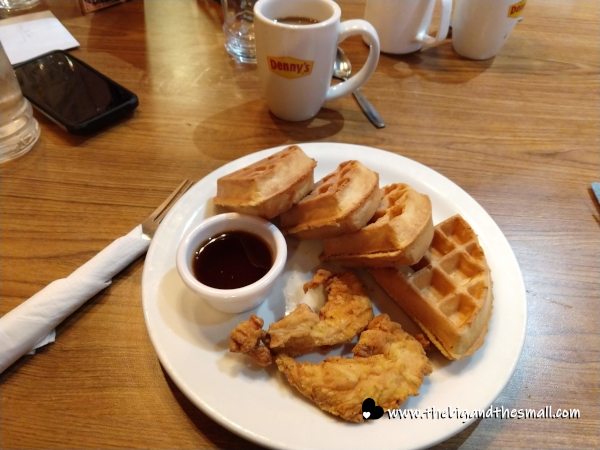 I went with a Santa Fe skillet, which caused a bit of confusion amongst the table when I ordered it. Fi thought I was ordering a "Santa Face" skillet because Christmas, and let's be honest if that was a thing I definitely would have ordered. That was mostly a problem of being able to hear properly across a large table and with my accent. But everyone at the table was confused when I ordered my eggs "over easy" - no one knew what that meant! I explained, and later we noticed that on the table they actually had a card explaining all the different ways you could order eggs. My skillet was a bit lackluster, they forgot the cheese and brought some out to me later, and it really could have used some salsa and sour cream, but the potatoes were crispy and the chorizo was pretty tasty. 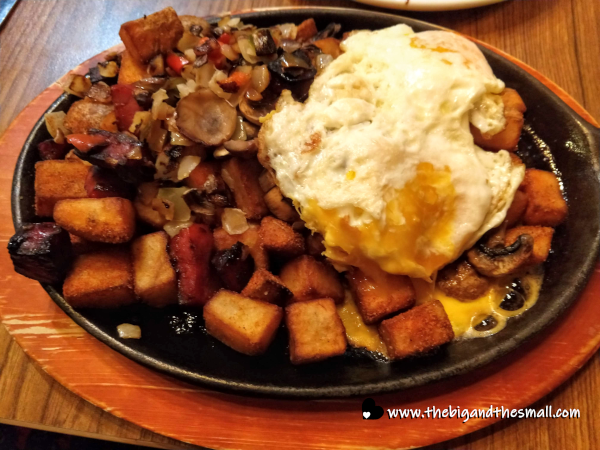 Other meals at the table included more pancakes, another skillet, some eggs benedict, and one person who went with a healthy meal. (Not very American diner-esque if you really want to do it right.) The best part of the morning was being with friends and the conversation around the table. We reminisced about our time here in Wales and shared our hopes and dreams for seeing each other again in the future. Our waitress kindly obliged my request for a group picture. 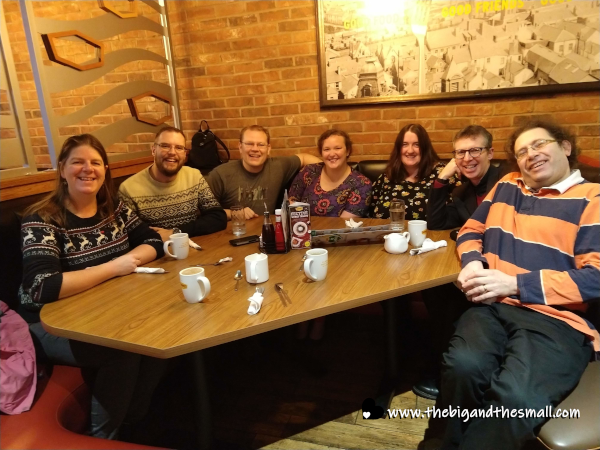 One thing that is very common at all restaurants in the States (not just Denny's) is something that surprised our Welsh friends - the waitress kept refilling their coffee! They said that was very unusual and they are used to nursing just one cup at breakfast. Here, the waitress kept coming around and filling it up whenever they got close to half empty. The mugs all had fun sayings on them (including one about never having a half empty cup at a diner) but this one was my favorite. It's very similar to the slogan of the United Methodist Church which is "Open Hearts. Open Minds. Open Doors." 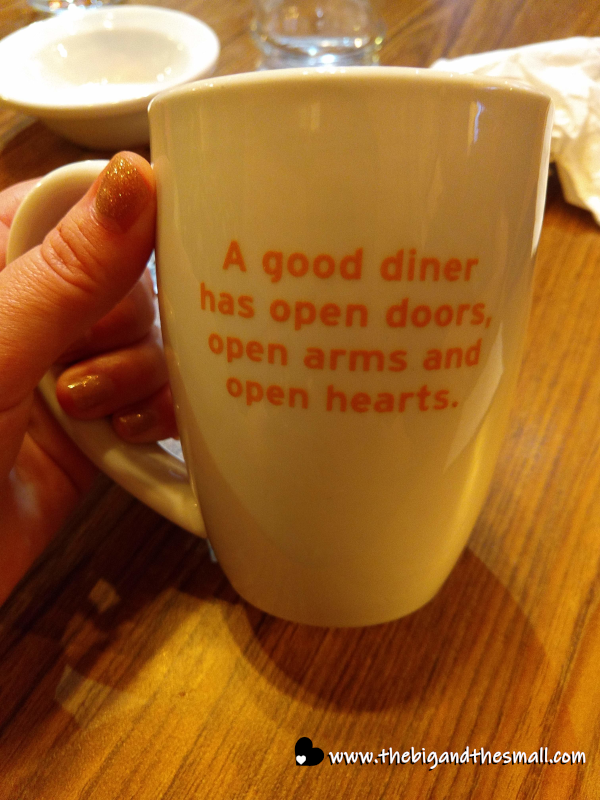 Overall I'd give this Denny's about a C when it comes to being truly American. The food was pretty close though the portions were a bit small and they were missing some key menu items. The food service was slow but the waitress was very attentive and accommodating. The prices were much higher than I expected - it's a value restaurant back home but here you should be prepared to drop some quid. (That's bucks for you Americans.) The decor was a bit higher end than most Denny's I've been but that's probably to be expected in a new build.

All in all it really furthers my desire to fulfil a half joking dream I have voiced to Joel and Steve for the last couple months - to open an American themed diner and call it "True American". I would have themed menus that rotate according to the season, as well as include all the truly American things we haven't seen here yet, including biscuits and gravy and buckets of ranch dressing. Perhaps my favorite bit - a big, huge blowout party every year on the Fourth of July! I don't actually want to put in the work for this dream - but if someone wants to take my idea and run with it I have a lot of ideas about this I can share with you.

Have you every been to an American restaurant abroad? Was it more or less like one back home than you expected? Let's chat!