A British Christmas Celebration: Presents, the Queen, and Games!

Even though it's still early December, our British Christmas Celebration continued after we had our authentic Christmas dinner. Steve really surprised us by pulling out all the stops! 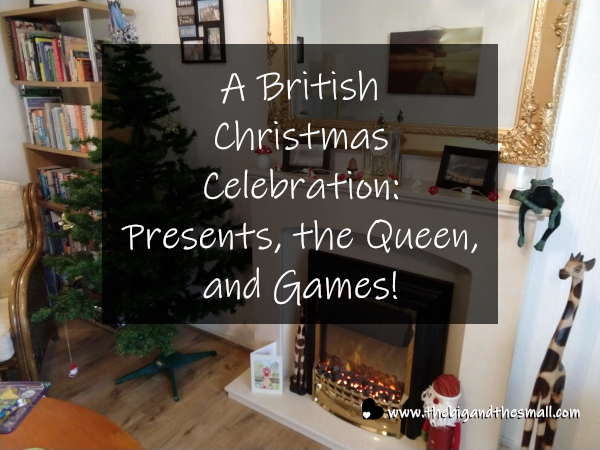 In British households, instead of hanging a stocking by the mantel with care, when you go to bed at night you place an empty pillowcase at the foot of your bed. In the middle of the night, Santa comes and fills the pillow case with presents! In some families the pillow case will then stay at the foot of your bed, and in others it might get hidden somewhere and you have to find it. Once you have your pillow case you sit by the tree to open your presents. Steve told us this story about pillow cases which we thought was fun, but then he informed us he actually had pillow cases full of presents for us! 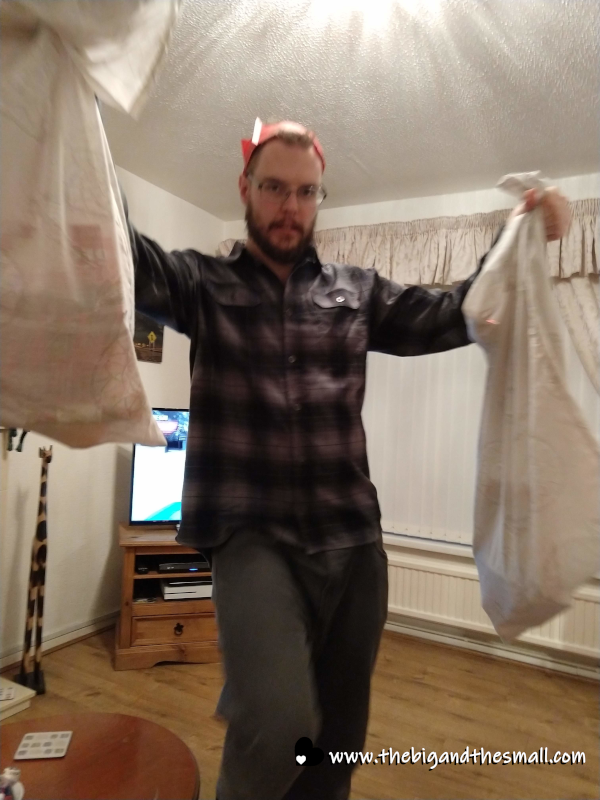 We were shocked and I was so excited. He kept telling us not to expect much, but who doesn't love presents?! I don't care what is in this wrapping, it's still fun to receive and to open. 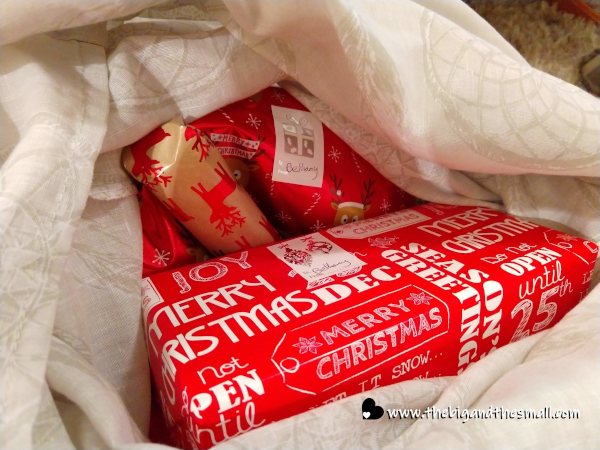 Before we dug into the presents, we opened the card Steve included. It's in Welsh! It says something to the effect of Merry Christmas and Happy New Year. Steve wrote in Welsh on the inside, too, so Joel had to use Google translate to figure it out. 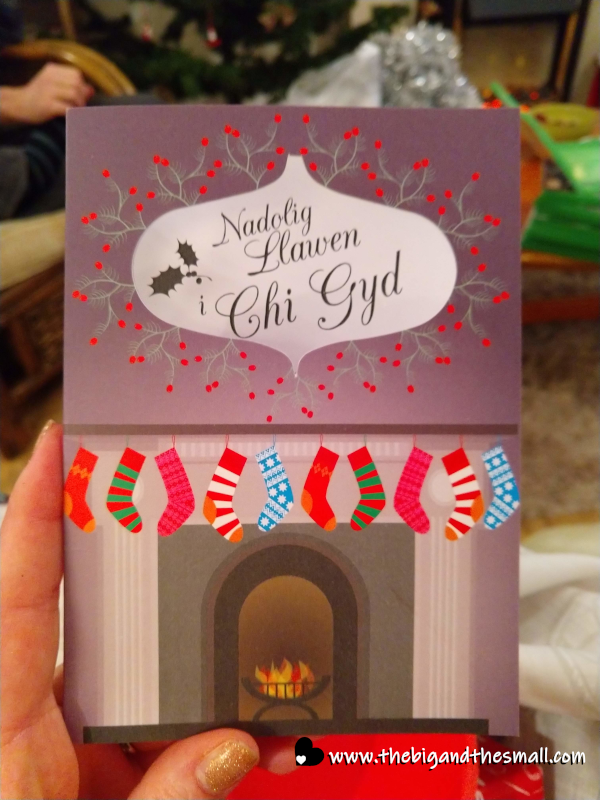 Then it was time for the goodies! Joel made us stick to the tradition of trying to guess what each present was before we opened it. This first one was long, round, and sturdy - I guessed big pencils, and Joel guessed candles. When we unwrapped it and saw it, I thought Joel was right, it looked like candles. Turns out it's actually rock candy! A little different from the rock candy we are used to. We haven't tried it yet as we decided it was good road trip food (we leave tomorrow for Scotland!) so I'll report back once we've had some! 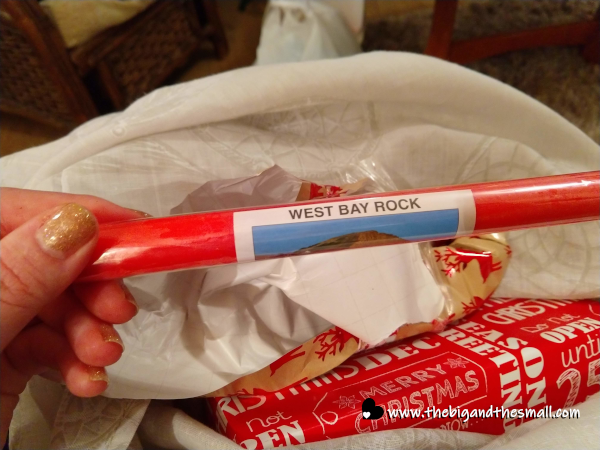 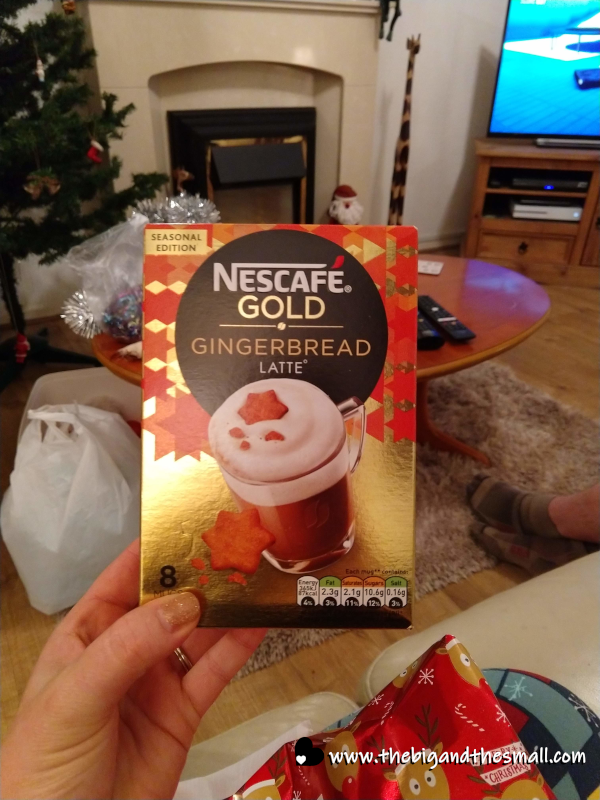 The tea came in really cute packaging featuring the iconic red telephone booth, the flag, and the double decker bus! 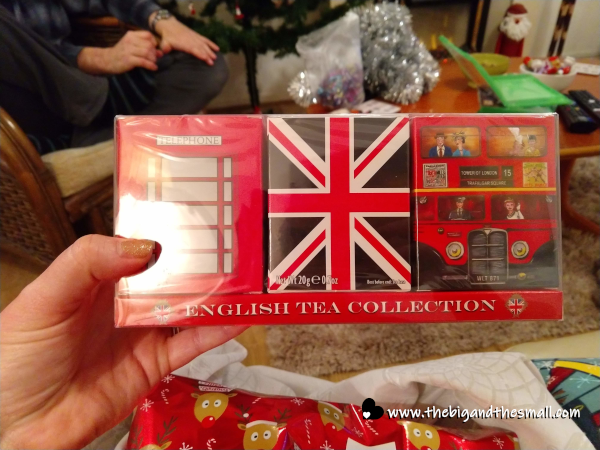 On my last gift I was actually able to guess what it was before opening it - I could tell by the feel and the sound from shaking it that it was a bag of crisps! (aka potato chips) Steve has caught on to my love of trying new kinds of crisps, so he got me this Turkey and stuffing flavored bag. We have a whole host of flavors we are planning to try at some point while we are in Scotland, so be sure you are following us on Facebook so you catch that video when we do it! 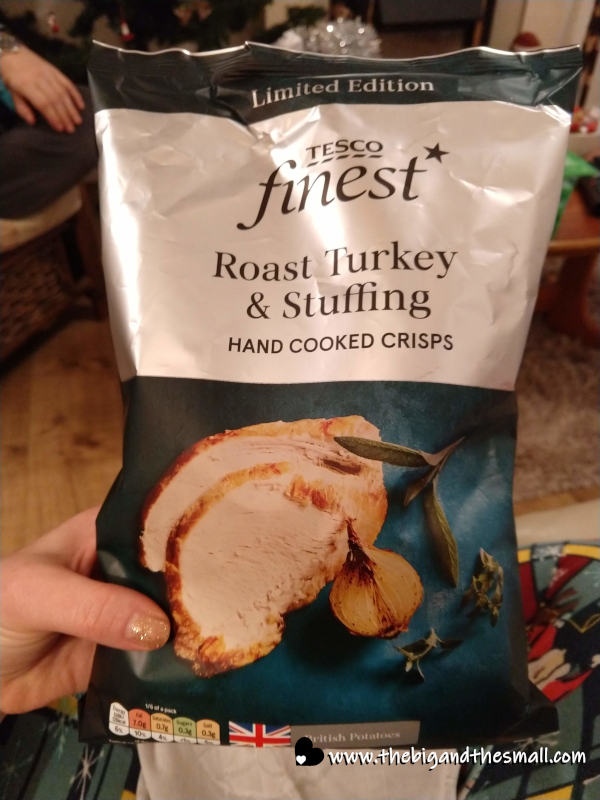 Perhaps the best gift of the night was a package of fake mustaches for Joel. We made him put one on right away and he wore it the rest of the night! Here he is twirling his "villain mustache". 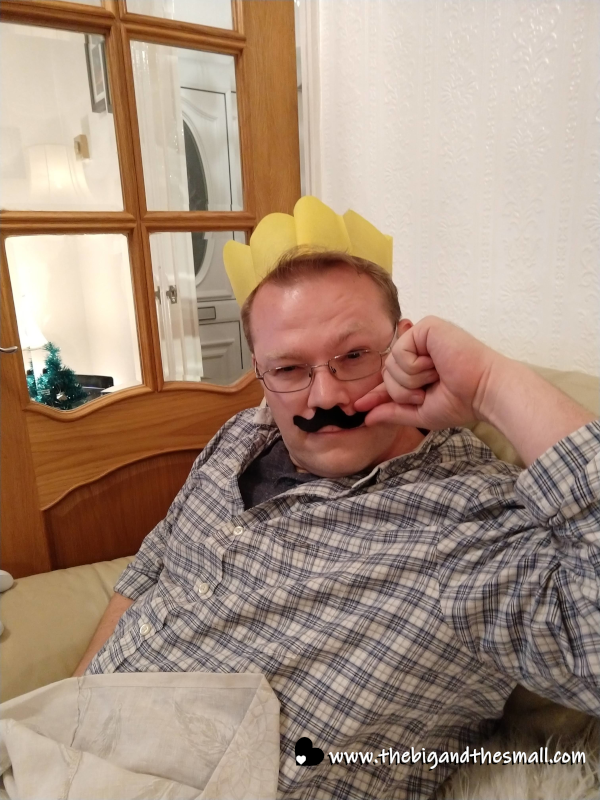 Then it was time for perhaps the most British tradition of all - listening to the Queen's speech! Every Christmas day the Queen addresses the nation for about ten minutes and everyone turns on the TV and gathers around to listen. Since it wasn't actually Christmas day Steve pulled up the speech from 2017 on YouTube and we watched that. We learned that the Queen is married to a Prince - he does not have the title of King because then he would supersede her position. We also learned that when they sing "It Came Upon A Midnight Clear" (one of my favorite Christmas songs) they sing it to a different tune and it is all wrong and terrible. Watching the speech was really interesting, and we definitely plan to catch the 2018 one this year on Christmas day! 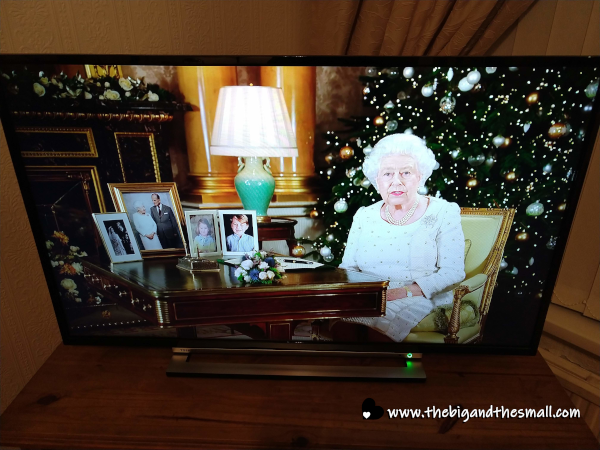 Since I got distracted earlier in the day when I was supposed to be decorating the tree, we took a little while to finish decking it out. This part is pretty much the same as back home (and would usually happen well before Christmas day) but I did enjoy getting to do it since I don't have a tree of my own this year. Steve didn't have lights yet (it's a long story) but he does plan to add some later. Otherwise here is the final product! 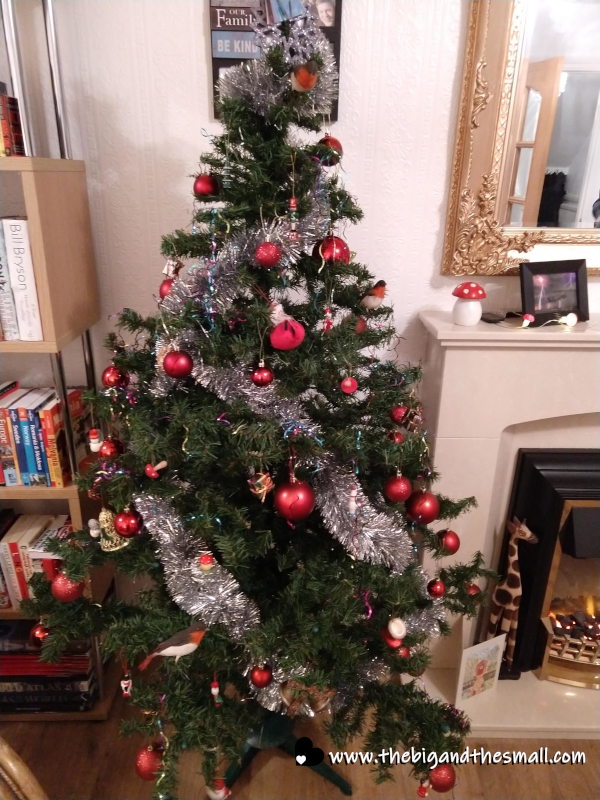 Once the presents were open, the Queen had been heard, and the halls were officially decked it was time for games! One of my presents was the game of Jacks, so all three of us got down on the floor to play. We did not get a picture of us looking like little kids playing this game. Next up was a significantly more adult game - Cards Against Humanity. Coincidentally enough the very first black card we pulled was this - "Instead of coal, Father Christmas now brings the children ________." I mean how perfect is that? 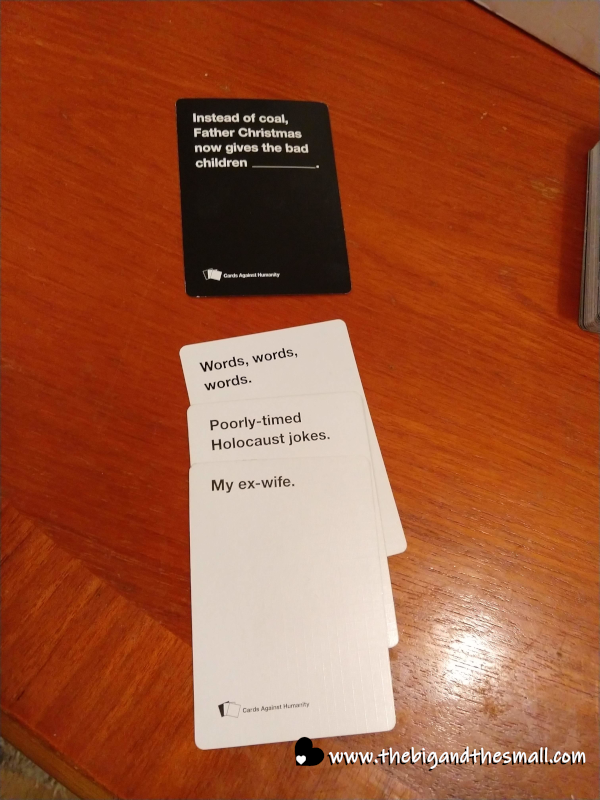 Since there were only three of us playing, we threw Steve's stuffed frog friend in as a fourth player. (Aka we picked a random card to add to the mix every time). The frog really sucked at the game, while Joel kicked all of our butts. 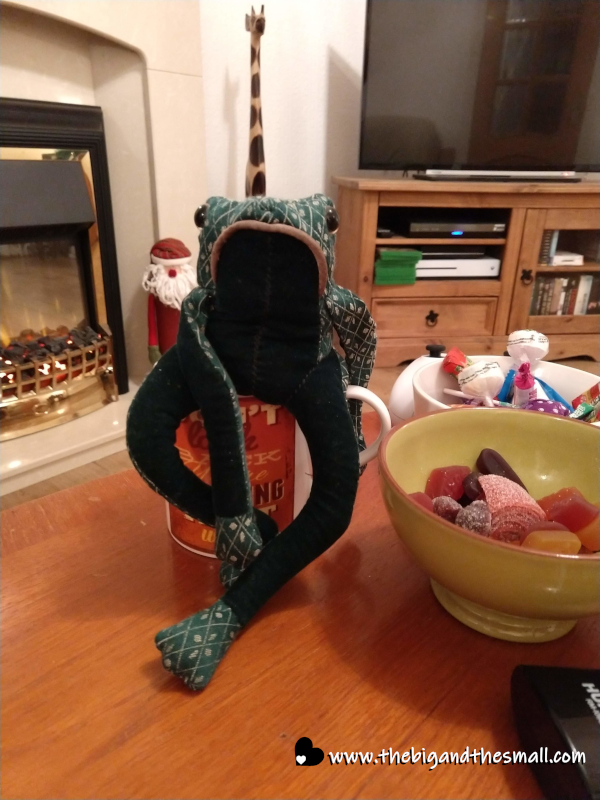 The last game of the night was called "The 5 Second Rule". The basic idea is that you are given a category and you have 5 seconds to name 3 things in that category. An example question would be "Name 3 boy names that start with D". The pressure of the timer makes this a heck of a lot harder than you think it would be! I choked on this question naming "Dave," "Dan," and then when I couldn't think of anything else somehow came up with "Delvin." The guys laughed at me but I told Joel if we ever have a son I'm going to name him Delvin then invent time travel so I can go back to that moment and win. So there. 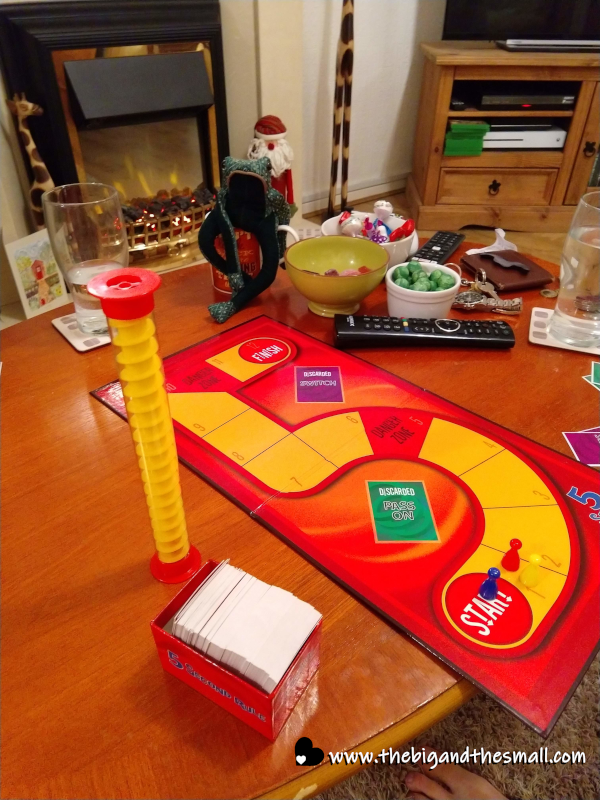 In the end we deemed that game so awesome that we are planning to take it with us on our road trip. By the time we were done playing games it was much later than we thought - past 10 o'clock! Time flies when you're having fun. As Steve drove us home Joel noticed the night sky was perfectly clear, so we drove a little further till we found a place without light pollution to pull over and look at the stars. I have never seen a sky so clear or seen so many stars shining so brightly. It was incredible and a perfect end to a pretty perfect day.

We are so grateful to Steve for making us food, giving us presents, and all around hosting the best early British Christmas ever! What traditions sound the most fun to you? Anything you want to incorporate into your Christmas? I'm loving the Christmas crackers at dinner, the Queen's speech, and playing games!